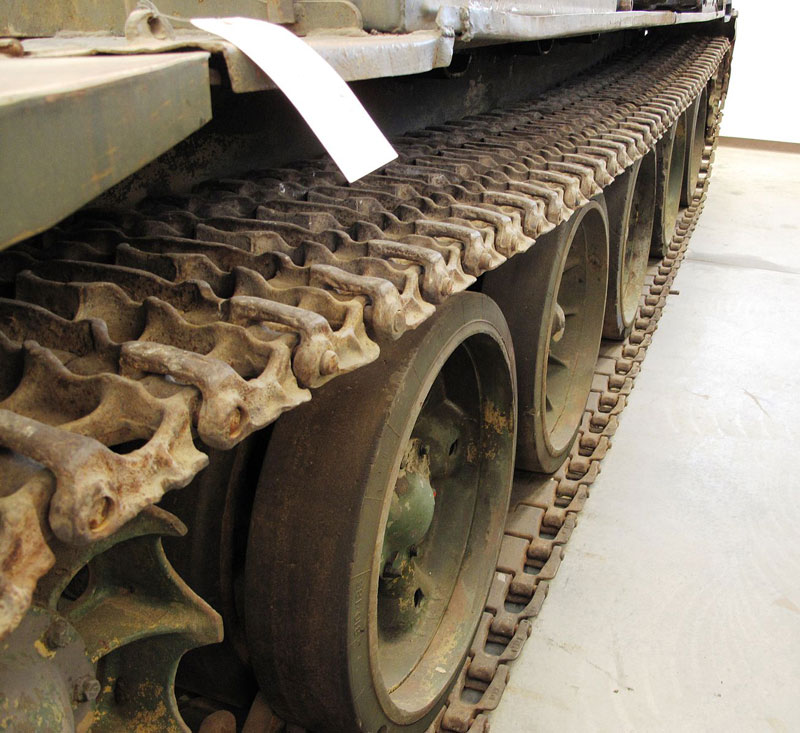 Tracks of the T-62 tank at the Military Vehicle Technology Foundation.
Wikimedia/Free Denizen
The fiscal ravages of the pandemic had little practical effect on worldwide military spending in 2021, as it passed US$2 trillion (C$2.5 trillion) for the first time, the Stockholm International Peace Research Institute reported on April 25.

The list of the five biggest spenders bore no surprises: the United States led the way, followed by China, India, the United Kingdom and Russia. Together, they accounted for 62 per cent of all military spending, said the institute.

“Even amid the economic fallout of the COVID-19 pandemic, world military spending hit record levels.”

The organization studies conflict, arms control, armaments and disarmament. Its most recent accounting tallied total military spending at a record $2.1 trillion-plus—a 0.7 per cent real-term increase (an apple-to-apple comparison converting 2021 spending to 2020 U.S. dollars, thus eliminating the effects of currency fluctuations from the calculation). It is the seventh straight year military spending has risen.

“There was a slowdown in the rate of real-term growth due to inflation. In nominal terms (2021 dollars compared to 2020 dollars), however, military spending grew by 6.1 per cent.”

Overall, the economy recovered sharply last year as new strains of COVID proved more contagious but less deadly, prompting some countries to loosen pandemic-related restrictions. Production escalated and spending picked up. As a result, the global military burden—expenditures as a share of world gross domestic product—fell 0.1 percentage points, from 2.3 per cent in 2020 to 2.2 per cent in 2021. 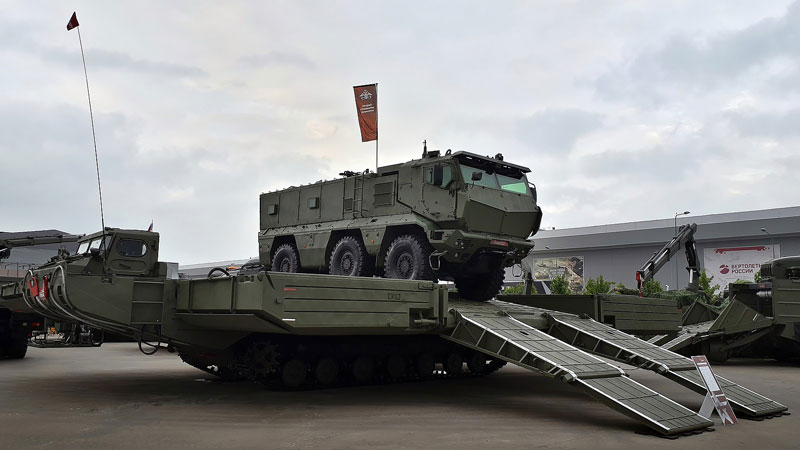 Ferry bridge vehicle PMM-2M during the “Armiya 2021” exhibition.
Wikimedia/Kirill Borisenko
U.S. military funds for research and development (R&D) increased by 24 per cent from 2012 to 2021, while funding for arms procurement fell 6.4 per cent in the same time frame.

In 2021, spending on both fell. However, the decrease in R&D spending (down 1.2 per cent) was less than the drop in arms procurement spending (-5.4 per cent).

“The increase in R&D spending over the decade 2012-21 suggests that the United States is focusing more on next-generation technologies,” said Alexandra Marksteiner, a program researcher at the institute.

“The U.S. government has repeatedly stressed the need to preserve the U.S. military’s technological edge over strategic competitors.”

The superiority of American arms tech has been especially evident during the current war in Ukraine, in which U.S.-supplied weapons, along with those provided by Canada and other NATO allies, appear to have consistently outclassed Russian armament and provided Ukrainian forces with power disproportionate to their numbers.

Ukraine’s military spending has risen 72 per cent since Russia annexed Crimea in 2014. Spending fell in 2021, however, to $5.9 billion, yet it still accounted for 3.2 per cent of the country’s GDP.

In the long buildup to its Feb. 24 invasion of Ukraine, Russia increased its military spending by 2.9 per cent in 2021, to $65.9 billion. It was the third straight year of growth, with Russian military spending reaching 4.1 per cent of GDP.

“Russian military expenditure had been in decline between 2016 and 2019 as a result of low energy prices combined with sanctions in response to Russia’s annexation of Crimea in 2014.”

The institute reported that Russia’s national defence spending escalated last year to $48.4 billion, or 14 per cent more than its initial budget. 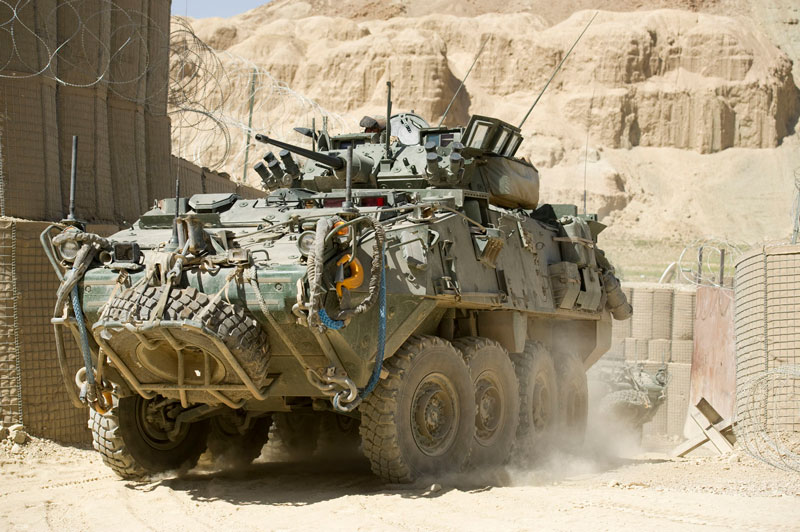 Russia’s current account surplus—a broad measure of its trade, investment earnings and transfer payments with the rest of the world—widened to $58.2 billion in the first quarter of 2022. The Central Bank of Russia’s international reserves—including sanctioned and frozen reserves—totalled $609 billion as of April 8, down from a record-high $643 billion just before the invasion.

Unless the European Union imposes broader sanctions on Russian oil and gas, analysts say Moscow’s current account surplus could end the year well above $200 billion, up from about $120 billion in 2021.

“We are yet to see the full impact of sanctions and resulting consequences of the war on Russian foreign trade and the domestic economy, even if there is no near-term oil or gas embargo,” wrote Levon Kameryan, a senior analyst at Scope Ratings.

Writing for the online financial news site FX Empire, Kameryan said the consensus is that the Russian GDP will shrink 10 per cent this year. He said the country will not be able to fully substitute lost oil and gas revenues with sales to non-sanctioning countries such as China “any time soon.” 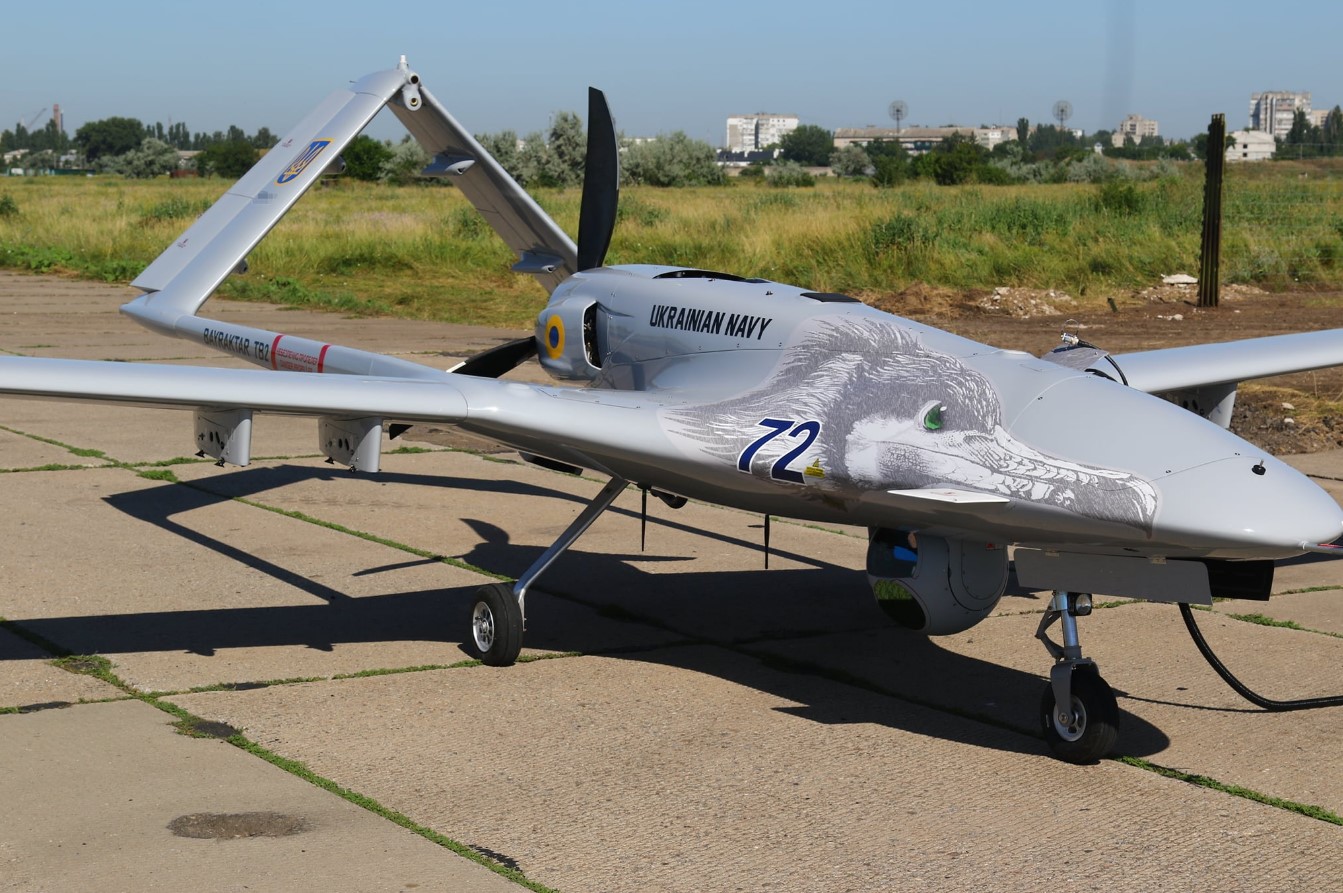 At US$2 million apiece, Turkish Bayraktar TB2 armed drones have become a symbol of Ukraine’s staunch defence against Russia’s invading forces.
Ukrainian navy
China was the world’s second-largest military spender, allocating an estimated $293 billion to its military in 2021, 4.7 per cent more than in 2020. China’s military expenditure has risen for 27 consecutive years. It is currently in its 14th five-year plan, running through 2025.

China’s steady buildup and its claims to Taiwan and in neighbouring strategic waters have reverberated throughout the region, as evidenced by military spending in countries to whom its expansionist aspirations pose a perceived threat.

“China’s growing assertiveness in and around the South and the East China seas have become a major driver of military spending in countries such as Australia and Japan,” said Nan Tian, an institute senior researcher.

He cited the AUKUS trilateral security agreement between Australia, Britain and the United States under which Australia will purchase at least eight nuclear-powered submarines for an estimated $128 billion.

In other notable developments:

The institute claims to maintain “the most comprehensive, consistent and extensive publicly available data source on military expenditure.”

The figures encompass all government spending on current military forces and activities, including salaries and benefits, operational expenses, arms and equipment purchases, military construction, research and development, and central administration, command and support.