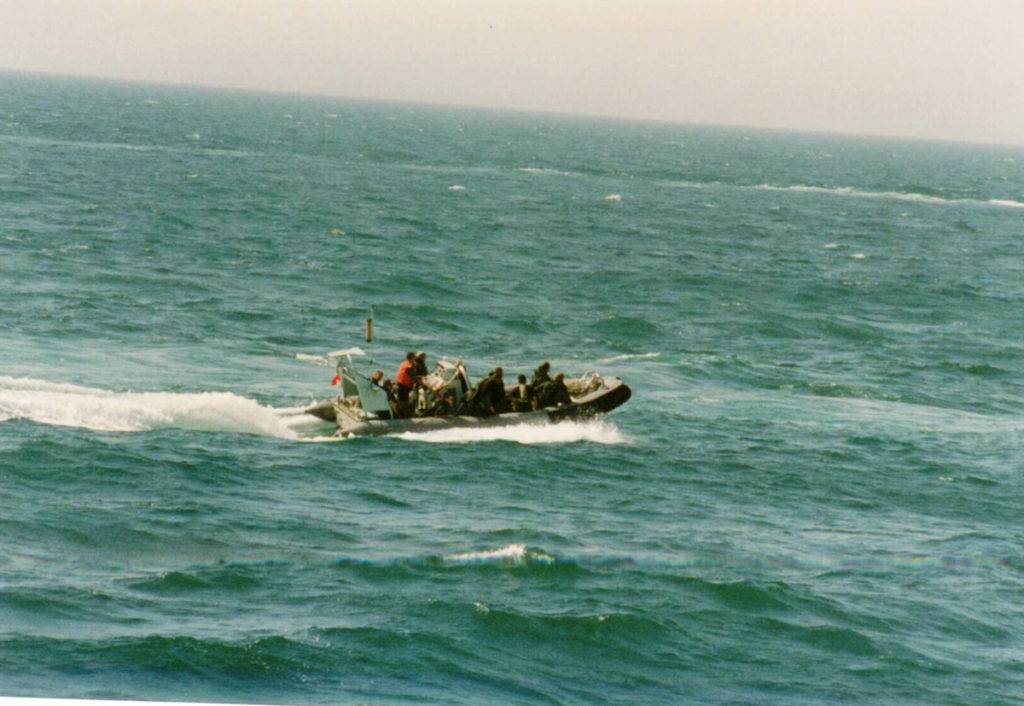 A Canadian boarding party intercepts a cargo vessel in the Persian Gulf.
Gulf War Veterans of Canada
Canadian sailors had limited to no experience in boarding potentially hostile ships at sea when they embarked on their mission to the Persian Gulf in August 1990. Yet this was to be one of their primary roles.

Their British and American allies had marines and others specially armed for and trained in hailing foreign vessels and boarding them.

Canadian sailors did the bulk of their training as they crossed the Atlantic from Halifax. They were understandably concerned as the three ships pulled into port at Manama, Bahrain’s capital city, before assuming their seaborne duties. During the stopover, headquarters staff assured them they had nothing to worry about.

“The Brits and the Americans are saying ‘don’t worry about it, we rarely do boardings; we never do a boarding in rough seas; you’ll never see a boarding at night—don’t even think about that,’” recalls Roger Girouard, who at the time was the executive officer aboard the group’s flagship, HMCS Athabaskan.

Canadian sailors did the bulk of their training as they crossed the Atlantic from Halifax.

“Well, we left Manama that first day just before sunset, and at about 9 o’clock that night, we were tasked with our first boarding—in a big wind and a tough sea.”

It was September. The forces of Saddam Hussein had occupied Kuwait for over a month. Operation Desert Shield was imposing an embargo that the oil-starved West hoped would persuade the Iraqi president to withdraw his troops. Operation Desert Storm, the offensive that ultimately freed Kuwait, was months away.

Athabaskan’s first hailing was a stubby, high-sided ferry sailing north out of India across the Arabian Sea. A couple of hours after leaving port, the Canadian destroyer launched its two rigid-hulled inflatable boats known as RIBs—27-foot Zodiacs with the ship’s boarding party distributed between them.

It was dark. The seas were up. On this, their first operation, they had no idea what to expect.

“Truth be told, we were scared to death,” said Girouard, a Montreal native who, as a sub-lieutenant, had made his first boarding on a Romanian fishing boat on the Grand Banks off Newfoundland 16 years earlier.

The ferry, it turned out, was headed to Kuwait to evacuate foreign workers the Iraqis were holding in fenced compounds, like prison camps. Most were Muslims from India and Pakistan, whom this same ferry had brought to work in the region’s oil-rich nations as domestic staff, labourers and the like.

The Canadians were soaking wet. As they pulled up alongside the ferry, the Indian crew deployed a “rickety, rickety” ladder over the side. Girouard looked at his chief; his eyes were as big as saucers. But up they went, armed with light weapons, a couple of ship-borne .50-calibre machine guns pointed their way to back them up.

It was dark. The seas were up. On this, their first operation, they had no idea what to expect.

“It’s like playing sports,” said Girouard, a lieutenant-commander at the time. “You get first contact, then you get on with it. We scoured the ship, found the potatoes but no weaponry, no illicit materials, and we let them go.” 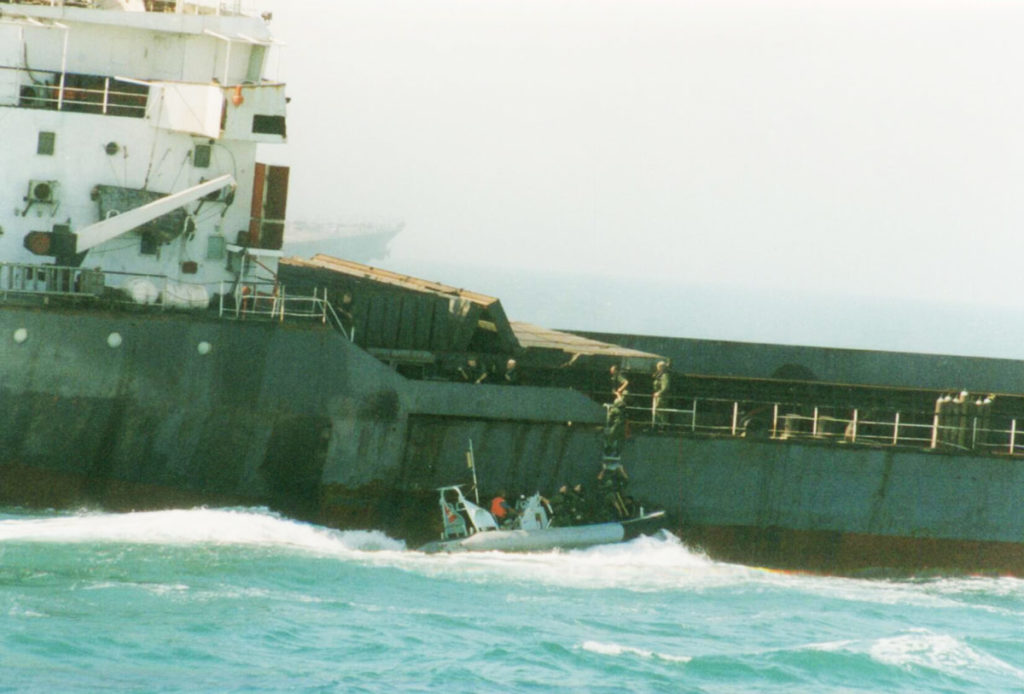 A Canadian boarding party at work in the Persian Gulf.
Gulf War Veterans of Canada
Athabaskan’s boarding parties—they had two shifts of 10-12 crew apiece—would conduct a dozen such operations by the time it returned home the following spring. HMCS Terra Nova and the supply vessel Protecteur would do the bulk of them, while Athabaskan headed farther up the Gulf on specialized operations.

By the time the coalition offensive started in mid-January, the Canadians—just 10 per cent of the seagoing force—had conducted more than a quarter of all interdictions (1,644 of 6,103).

While the Canadians had experimented with helicopter-borne insertions on the way over, they stuck to the RIBs throughout their nine-month deployment. During the 43-day war, they resorted to escort duties, then resumed embargo enforcement in the aftermath.

They boarded cattle carriers and car carriers, and supertankers the length of three football fields, each time ascending several storeys up rope ladders or scramble nets to the deck, never sure what they would encounter when they got there.

Boarder Ian Matheson, an able seaman aboard Athabaskan, was usually the first man up, the high-point sentry who would ascend to the ship’s topmost point to provide oversight as the others assumed assigned positions or searched for contraband.

If things went south, it was Matheson who would provide cover while his crewmates evacuated the vessel. A good swimmer, “young and stupid,” he would be the last off in an emergency. None came.

He said that, like Girouard, some of the Canadians had boarded fishing vessels, some in much heavier seas, but none were the size of the ships they encountered in the Gulf.

“On that scale and at that level, it was very new,” he told Legion Magazine. “We were learning as we went.”

Some of the boarders—not all—carried radios. Early on, they didn’t have coveralls and would hide the names and ranks on their uniforms with gun tape. The searches would often take hours, sometimes more than one shift.

One supertanker was turned back with false tanks; they found a weapons cache aboard a cattle ship. They sent several overloaded tankers into port for further inspection.

The cattle ships were the worst. Matheson, who grew up on a farm in Belle Cote, N.S., says he’ll never forget the smell in the sweltering heat and humidity.

The searches would often take hours, sometimes more than one shift.

“Condense 150 times what a barn would smell like if it hadn’t been cleaned,” he said. “I was up top, but it still stunk with the heat. Those guys (doing the searches) just threw their clothes away. It was pretty disgusting.” 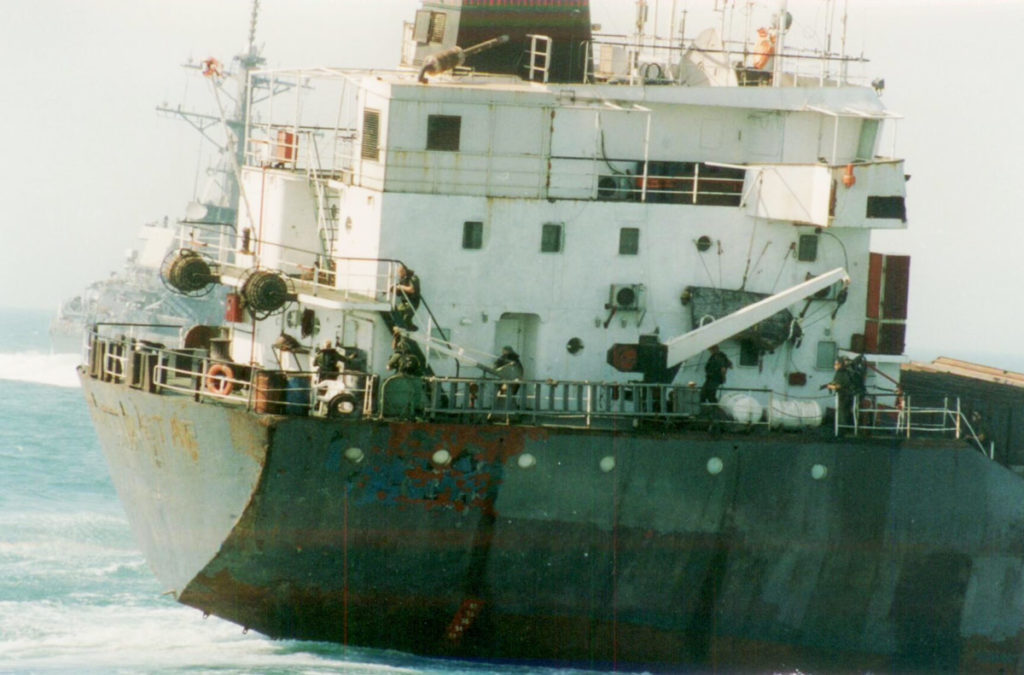 A Canadian boarding party at work in the Persian Gulf.
Gulf War Veterans of Canada
They became adept at the practice, landing up to a dozen crew on a foreign deck in less than a minute.

Still, Matheson said the sense of anticipation never went away, even as ship after ship complied with the Canadians’ orders to come to and submit to boarding.

“You always knew you were leaving the safety of your own ship and going over somewhere that, if someone had ill intent,” they would be in a confined space with little knowledge of the landscape and no idea what they were up against.

On one boarding, Matheson was crossing through a passageway from one side of a ship to a ladder on the other when he startled a crewman, who then pulled a knife.

“I remember my mind going, ‘holy shit, he pulled a knife.’ And then, all of a sudden, I went, ‘I have a gun. OK, I’m OK.’ I just crouched down, pointed the gun at him and he threw the knife over the side. It was gone.”

Matheson then sat the man down, zip-tied his hands behind his back, and went on his way.

Later in the deployment, Athabaskan encountered the same ferry it had boarded its first night on duty, this time headed south. The Canadians hailed the vessel and sent over a boarding party. What they found was unlike anything else they had encountered the entire mission.

The ferry was overloaded with refugees, many of them sick or injured. Some had been shot. The Canadians dispatched a medical team, who administered first aid while the sailors provided food and water.

At one point, a woman who had worked in the Canadian embassy in Kuwait City came forward. She had intelligence and they delivered her, along with others, to authorities in Bahrain. 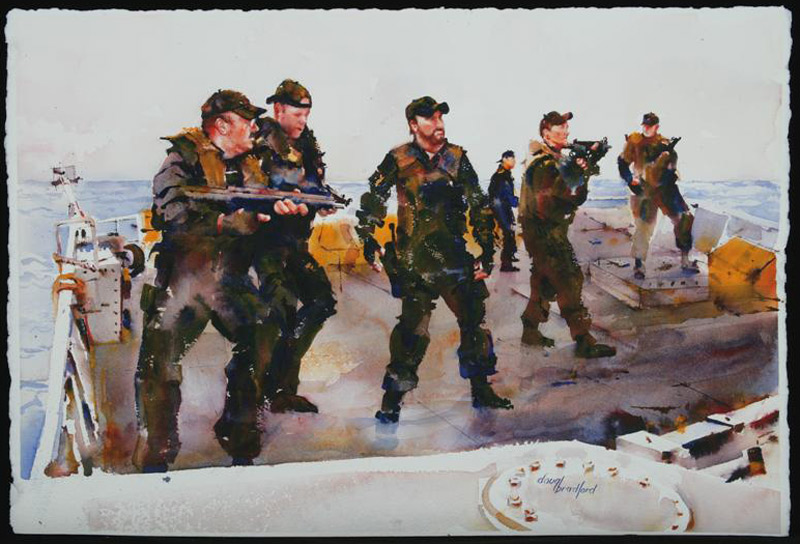 “A boarding party coming aboard the Whitehorse” depicts Canadian sailors on exercise, a typical scene involving a boarding party.
Douglas Bradford/CWM
Amid the crowd and noise and confusion, one of the boarders sighted a lone little girl appearing terrified by the armed men in uniform who had come aboard her refuge. She looked a lot like the sailor’s own daughter.

The Canadian told his wingman to cover him, then he took his helmet off, laid down his rifle, and made his way over to the child. He knelt beside her, reached into his pocket and pulled out a chocolate bar. He handed it to her.

“A little while later, the medics are coming out and she’s standing by his side, holding onto his hand,” said Girouard. “As far as I am concerned, that is Canada in the Middle East.

“That beautiful story is about what I believe we wanted to bring to that tough place.”

Girouard would go on to command Joint Task Force Pacific and Maritime Forces Pacific out of Victoria, where he was responsible for naval readiness. He retired a rear-admiral in 2007, after 33 years with the regular force. He’s now assistant commissioner of the Canadian Coast Guard’s Western Region.

For more on Canada’s role in the liberation of Kuwait, read “Gulf War Aftermath” in the March-April issue of Legion Magazine, now on newsstands.