A harder line against China is needed 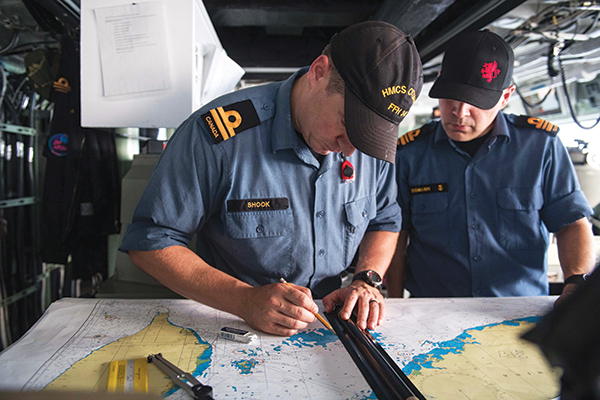 Lieutenant-Commander Tyson Bergmann (opposite, at right) and Lieutenant (N) Chris Shook chart a navigation route for HMCS Ottawa through the Taiwan Strait during operations Projection and Neon in September 2019.
Leading Seaman Victoria Ioganov/DND/PR04-2019-0001-178
Last October, thousands of American and Japanese troops and hundreds of naval vessels from both countries held a joint landing exercise not far from Okinawa. In recent years the annual operation, Keen Sword, has become more intense and more extensive. This time, an American Nimitz-class aircraft carrier with a strike group participated.

Keen Sword is part of naval preparedness operations under “The Quad,” an informal—but growing into a stable—mini-alliance of the United States, India, Japan and Australia. It was formed to counter growing Chinese naval threats to countries on the East China Sea and the South China Sea, and China’s efforts to expand its influence to island nations scattered from the Indian Ocean to the central Pacific.

The United States and Australia have long had mutual defence arrangements; so have the United States and Japan. In October, the U.S. and India signed the Basic Exchange and Cooperation Agreement for Geospatial Intelligence. India had military confrontations with China in the Himalayas in 2020 and is increasingly concerned with Chinese military expansion in the Indian Ocean. India is in the process of building or acquiring at least two additional aircraft carriers to add to its growing navy.

What does Canada have to do with any of this? HMCS Winnipeg, with its new CH-148 Cyclone helicopter, took part in the Keen Sword naval manoeuvres. Winnipeg is also the latest Canadian frigate to participate in a co-ordinated multinational effort to enforce UN sanctions on North Korea.

Canada is dipping its toe into a growing naval confrontation in the Pacific region. On several occasions recently, Canadian frigates sailed the Taiwan Strait between Taiwan and China. The U.S., Britain and Australia do so regularly, and when they do, they are deliberately exercising the right, as they perceive it, to sail through international waters. China sees the entire Taiwan Strait as its territorial waters, claiming that Taiwan is an inseparable part of China.

Canada does not recognize China’s claim, but when Canadian warships sail the strait, they are not doing so to make a political point about Canada’s stand on Taiwan. They are just saving time. For example, after Keen Sword, Winnipeg sailed the strait (as HMCS Ottawa had done several times in 2019), but only to “shorten” the route from wherever it was to wherever it was going. The fact that sailing on the Pacific side of Taiwan would add, at most, a day or two is rarely mentioned.

When Ottawa transited the strait in 2019, it did so only after extensive discussions at high levels in Ottawa. While the U.S., Australia, India and Japan are openly challenging China’s growing naval might in the region, Ottawa is playing footsie with the whole issue of how we relate to China and its aggressive policies in that part of Asia.

In November 2019, Richard Fadden, former national security adviser to Prime Minister Justin Trudeau, urged Canadians to start seeing Russia and China as adversaries. The U.S., under former President Donald Trump, clearly started doing so, as have the other Quad nations. President Joe Biden will no doubt continue Trump’s stance. Britain has already declared that one of its new aircraft carriers will be deployed to the southwestern Pacific or the Indian Ocean.

In effect, the region’s naval powers are moving closer to establishing a NATO-style military alliance to cover the region. Canada must be part of any such arrangement because of the importance of Pacific trade and because we must do whatever we can to help our partner nations in the region.

We are in a cold war with China already. It is different from the one the West “fought” against the USSR. Global trade and communications patterns are very different today compared to the time after the Second World War. But China’s aggressive diplomacy, backed by military power, is a great danger to us.

It is time to stop walking on eggshells when it comes to China.