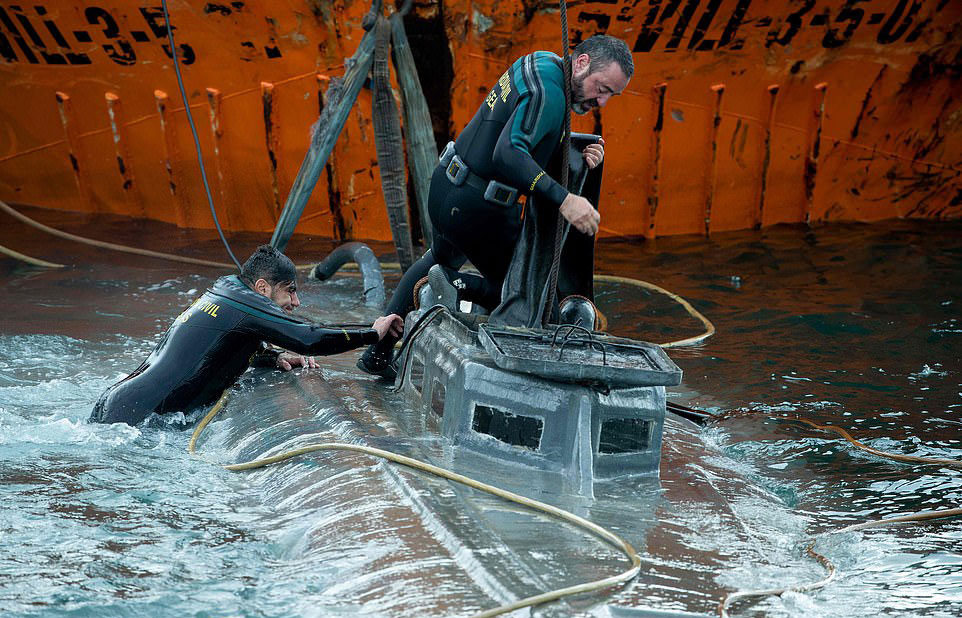 Spanish authorities take possession of a narco-submarine scuttled by its three-man crew Nov. 23 after a 7,700-kilometre voyage across the Atlantic Ocean from Colombia. It was carrying three tonnes of cocaine in 152 packages.
AFP/GETTY IMAGES

Spanish authorities recently captured a 22-metre submarine after its three crewmen transported US$121-million worth of cocaine 7,700 kilometres across the Atlantic Ocean from Colombia, then scuttled it and ran.

It’s the biggest narcotics submarine ever found, and the first confirmed to have transported drugs from the Americas to Europe, signalling what experts have characterized as a new era in the distribution of illicit drugs.

“I have analysed over 160 reported narco-submarine incidents since 1993 and this one is extraordinary,” H.I. Sutton, an underwater warfare analyst, wrote for Forbes Magazine. “Virtually all previous occurrences have been between Colombia and Mexico, and mostly in the Pacific.

“Narco-submarines typically travel a couple of thousand miles. But a transatlantic voyage in such a small craft is hard to contemplate….  This latest discovery changes our understanding of international drug smuggling.”

Spain’s Civil Guard, National Police and Customs Surveillance Service launched a joint operation Nov. 23 after the Maritime Analysis and Operations Centre in Lisbon, Portugal, alerted them that a submarine was navigating toward the Galician coast.

Spanish police subsequently captured two Ecuadorian crewmen. The Spanish captain was arrested a week later, still wearing the wetsuit he was in when he escaped the submarine.

The glass-fibre narco-submarine was refloated and towed to the Spanish port of Aldán. It was carrying three tonnes of cocaine in 152 packages. The vessel was specifically designed to conduct drug shipments and reportedly built in a secret shipyard in the jungles of Suriname or Guyana.

The $2.7-million boat is about twice the size of drug submarines operating out of Latin America and like most, Sutton says, it’s technically a low-profile vessel, meaning it sails low in the water with a deep, iceberg-like draft and can’t fully submerge.

Authorities believe the submarine has been operating between Guyana and Spain for some time. Law enforcement picked up its trail in Portugal after it stopped en route.

“Narco-submarines have long been suspected,” wrote Sutton, citing the 2014 discovery of a large narco-sub in Guyana. “But this discovery in Spain is the most solid evidence yet of this happening.” 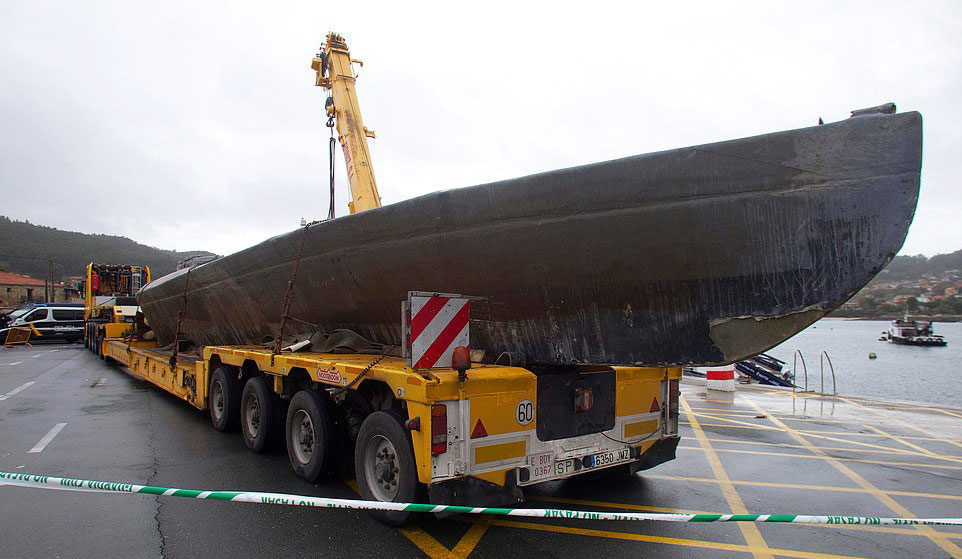 The 22-metre boat is the largest narco-sub seized to date, existed and the first to be caught transporting drugs from the Americas to Europe.
EPA
Narco-submarines were considered an oddity until 2000, when Colombian police discovered a half-built, 36-metre true submarine in a warehouse outside of Bogotá. The double-hulled steel vessel had a range of 3,700 kilometres, a capacity for about 15 tonnes of cocaine, and the capability to dive to 100 metres.

In 2007, a large narco-sub was discovered on Colombia’s Caribbean coast in the Guajira Desert, and in 2010 a convicted drug smuggler was reported to have been building a $20-million submarine in Africa.

“It was intended to sail across to Latin America where it would pick up a cargo of cocaine. It would return to the Canary Islands [off western Africa]; from there the drugs would be sent to Europe.”

In December 2015, a narco-submarine was discovered in the jungle on Brazil’s Atlantic coast. Its size, location and provisions suggested its crew had been preparing for a transatlantic trip.

The amount of cocaine seized annually by law enforcement authorities in the United Kingdom has reached its highest level since records began in 1973, The Guardian recently reported.

The Home Office reported almost 10 tonnes of cocaine were confiscated in 2018-19, up from 3.3 the previous year. Britain’s National Crime Agency said a large portion of the cocaine taken in last month’s Spanish seizure would have ended up on U.K. streets.

In 2009, a Canadian Forces Aurora patrol aircraft took part in a U.S.-led operation that led to the seizure of a semi-submersible carrying cocaine with an estimated street value of $240 million.

While Canadian authorities deal primarily with drug-bearing yachts and cargo ships, the U.S. Coast Guard has noted an uptick in narco-subs in recent years—so much so it has tripled its patrol presence in the Pacific. Over two months in 2017, U.S. Coast Guard boats stopped seven “low-profile drug smuggling vessels,” seizing more than 10 tonnes of cocaine worth more than $306 million, the service said in a release.

Just days before the Spanish seizure, the U.S. Coast Guard cutter Thetis intercepted two semi-submersibles in the Eastern Pacific. They were each carrying less than two tonnes of cocaine north toward the United States.

They brought to 31 the number of drug submarines reported off the coasts of the Americas in 2019, close to the record 35 incidents reported last year. For comparison there were only 16 in 2017, and just two in 2013.

Colombian authorities have also reported an increase in submarine-borne trafficking. The boats frequently sail from Central or South America north to the east and west coasts of Mexico. From there, the drugs make their way over land to the U.S. and Canada. 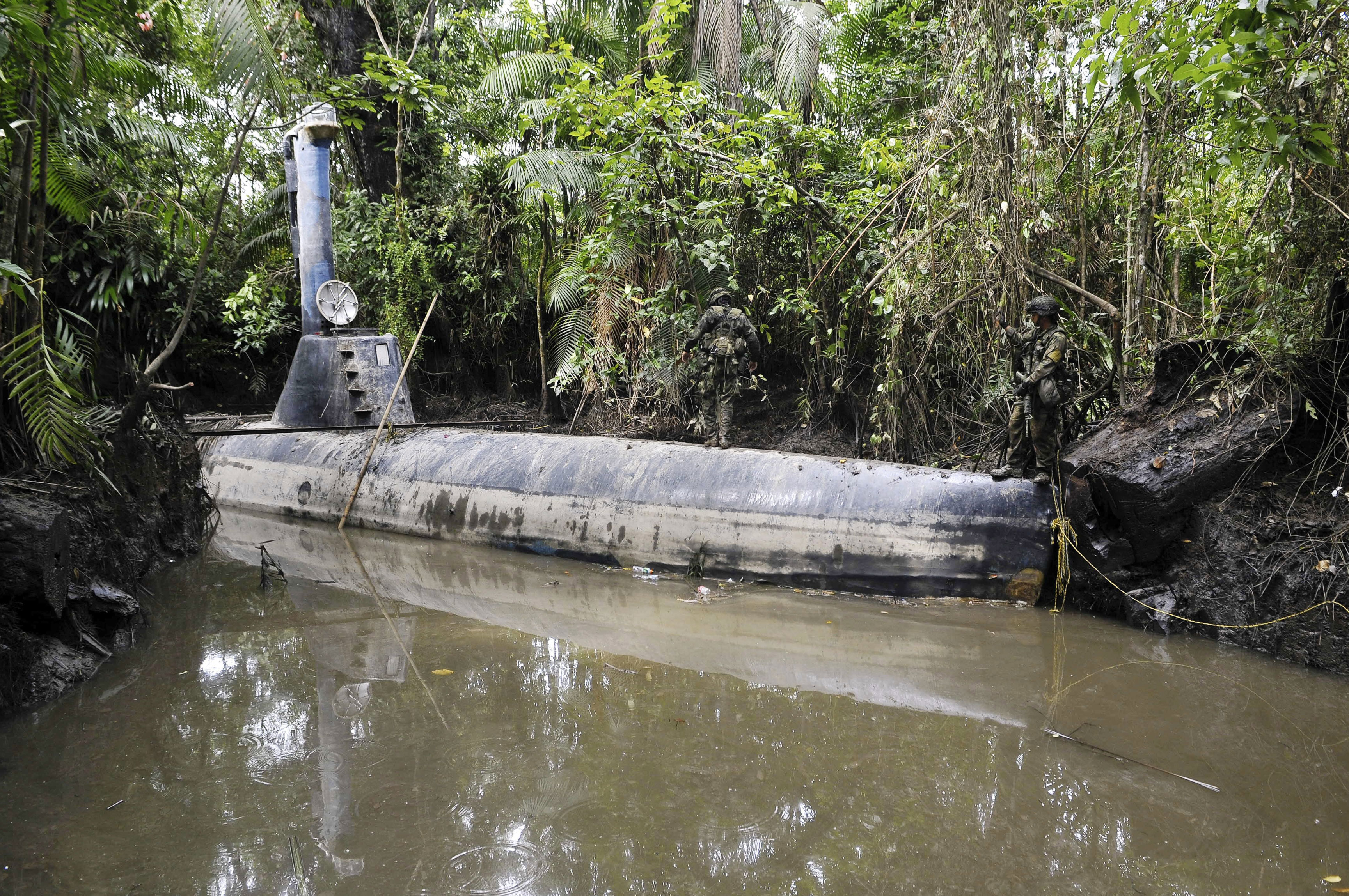 Mangroves lining rivers along Colombia’s Pacific coast provide builders of narco-submarines with cover from U.S. satellites. Drug smugglers also hide manufacturing operations beneath these trees.
GETTY IMAGES
Colombia’s Pacific coast is rife with muddy rivers that wind their way through vast jungles and beneath jagged cliffs jutting into the ocean. It has long been a smugglers’ paradise. The mangrove-fringed coves and thousands of kilometres of waterways provide ideal cover for clandestine shipyards to which criminals bring all the material necessary for the construction process, including heavy equipment such as propulsion gear and generators.

The submarines are sometimes prebuilt, then broken down into pieces and reassembled in jungle camps outfitted with sleeping quarters for workers. Narco-submarines can cost about US$2 million and take upward of a year to build.

Design and manufacturing techniques have improved, making the boats faster, more seaworthy, and bigger. An 18-metre narco-submarine can reach 18 kilometres an hour and carry up to 10 tonnes of cocaine.

They are typically made of glass fibre, powered by a diesel engine and manned by crews of three or four. They carry large fuel tanks with a range of 3,200 kilometres or more and are equipped with satellite navigation systems. There is no proper toilet and the accommodations are cramped.

The boom in narco-submarines reflects two realities of the cocaine trade, writes Janaki Goudar on the Insight Crime website. Coca production is at an all-time high in Colombia, and traffickers still consider the high seas one of the most effective ways to move drugs.

With Colombian coca cultivation reaching 209,000 hectares in 2017 and 208,000 in 2018, traffickers have sought to broaden their scope and their means of getting their product to far-reaching markets.

“The long-time smuggling method of concealing cocaine within cargo ships docking at U.S. ports has been employed by traffickers recently, evidenced by massive drug seizures at ports in New York and Philadelphia,” Goudar wrote.

The boats are designed to skirt radar technology and high-speed patrol vessels.

“Sitting below the waterline, semi-submersible vessels usually just have their exhaust pipes above the surface. As far back as 2009, such vessels could be constructed for as little as $50,000 and assembled in less than 90 days. Since then, they have only become faster, more sophisticated and likely cheaper to build.”

The fully submersible versions tend to have room for more crew and larger drug cargoes.

Because much of its structure is glass fibre and it travels barely under the surface, the vessel is nearly impossible to detect via sonar or radar, and difficult to spot visually. Newer models pipe their exhaust along the bottom of the hull to cool it before venting it, making the boat even less susceptible to infrared detection. They are most easily spotted visually from the air, although even that is difficult as they are camouflaged with blue paint and produce almost no wake. They have ballast tanks to alter the vessel’s buoyancy so that they ride low in the water.

The submersibles and semi-submersibles are built to be easily sunk, making their crews difficult to prosecute, since the drug cargo and the vessel bearing it—the evidence, in other words—can often end up on the ocean bottom.

Some authorities estimate a third of Colombian cocaine production is transported by submersibles and semi-submersibles. Admiral Kurt Tidd, then-head of U.S. Naval Forces Southern Command, told a U.S. Senate committee in February 2018 that authorities only intercept about a quarter of the narco-subs headed for the United States.

Video – The U.S. Coast Guard has released dramatic footage of its service members jumping onto the top of a “homemade” submarine alleged to be carrying thousands of pounds of drugs amid a series of seizure operations in the Pacific Ocean. – [U.S. Coast Guard/NY Daily News]

The challenge, Erik Soykan of the U.S. Department of Homeland Security told Popular Mechanics, is not only finding them but in having someone close enough to catch them.

“The subs are so low to the water that it takes an airborne radar system to detect them,” Soykan said.

U.S. Customs and Border Protection has more than a dozen such systems, but Popular Mechanics reports their area of responsibility is larger than the entire United States.

“When we do get them on the radar, we can track them,” Soykan told the magazine. “The hope is that there’s an interdiction force on the water that is able to intercept. There are many times when we know they’re out there, and there’s just nobody there to go after them. That’s frustrating.”

The smugglers are crafty. Some will drag an unmanned vessel behind the main boat, deep below the surface. If discovered, they will release the cocaine-stuffed drone so that another group can later track it on encrypted transmitters, recover the drugs, and complete the delivery.

The sophistication of the vessel captured off Spain caught authorities by surprise.

It has a fully enclosed wheelhouse, allowing the pilot to see outside while remaining at the waterline. The transatlantic trip is dangerous. The narco-subs are slow-moving and unable to outrun storms. They’re not built to any formal safety standard.

Their crews avoid shipping lanes because their vessels are built not to be seen and do not transmit an automatic-identification-system signal to broadcast their position to other ships. A 100,000-tonne container ship will easily run down a narco-sub without ever seeing or knowing it.

PrevPrevious ArticleThe death of a poet and fighter pilot
Next ArticleChoose our cover for the next issue of Canada’s Ultimate Story! Next