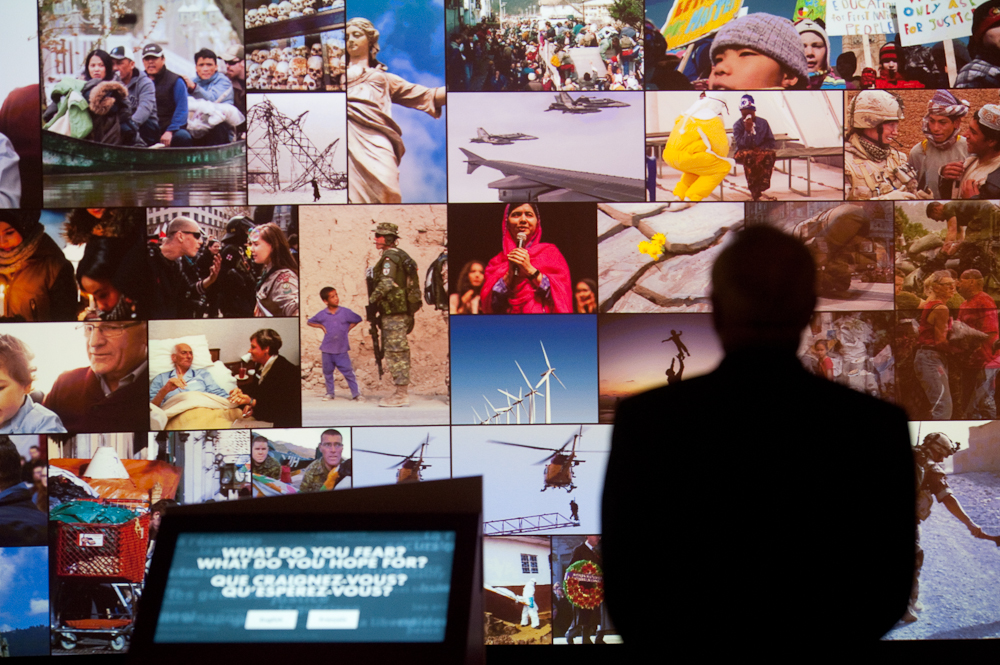 Unfortunately, the change these artifacts represent isn’t the one many would have hoped for when the Cold War came crumbling to an end with the collapse of the Berlin Wall and, ultimately, the Soviet Union.

It was there, behind the Iron Curtain, where Soviet general Mikhail Kalashnikov invented the AK at the outset of East-West hostilities, but the Cold War proved to be only the weapon’s adolescence. 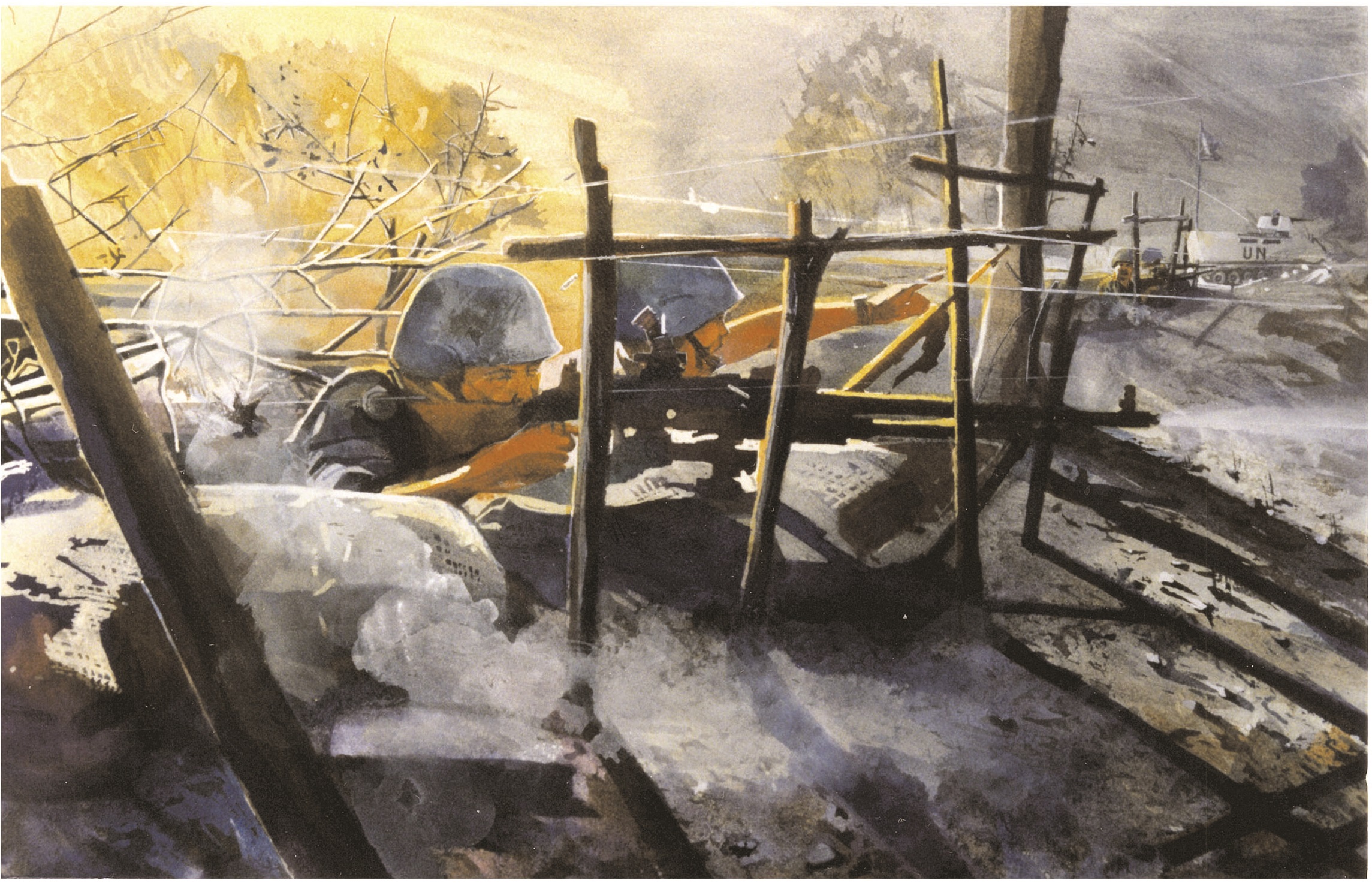 On September 15, 1993, regular and reserve soldiers serving with the 2nd Battalion, Princess Patricia’s Canadian Light Infantry, and French units moved in to enforce a ceasefire around the Croatian village of Medak. They were attacked by the Croatian military. During the ensuing 15-hour firefight, the Canadians and French held their ground against the larger Croatian force.
Painted by Katherine Taylor / CWM
The AK came of age in the aftermath of communism’s dominance in Russia and Eastern Europe, when the light, simple, unfailingly reliable yet notoriously inaccurate rifle became the chosen weapon of the new era—an era of terrorists, insurgents, guerrillas, rebels, radicals and child soldiers, the latter for whom it was ideally suited.

The section of wall reflects the hopes and possibilities that lay ahead when it came down in 1989. The west side is painted in graffiti, the bulbous TV tower of East Berlin in the foreground, its Eiffel Tower-like counterpart behind, beyond the opened Brandenburg Gate.

The east side of the wall is monotone, its pale paint intended to silhouette attempted escapees, making them easier targets for Communist border guards. But in this context, its symbolism is unavoidable—a blank canvas, a future filled with possibility, ultimately squandered.

Indeed, rather than an age marked by the much-hoped-for peace and international co-operation, the post-Cold War era gave rise to evermore bloody conflicts throughout the former Soviet Union and beyond.

Without Moscow’s iron-fisted control, ethnic and nationalist tensions were unleashed unchecked in many of its former satellites. Western-backed dictators fell like dominoes across the Middle East, failed states descended into bloody anarchy in Africa, and terrorism found new legs as radical Islamist groups emerged and spread like malignant, metastasizing cancers.

Gallery 4: From the Cold War to the Present, which opened on Sept. 21, chronicles this period. Its permanent exhibits span five conflicts, reflecting Canada’s shifting priorities as its role evolved from traditional UN peacekeeper and dutiful NATO guardsman to peacemaker and war-fighter in the Persian Gulf, Somalia and Afghanistan, and referee, of some futility, to the horrors of ethnic cleansing in the Balkans and Rwanda. 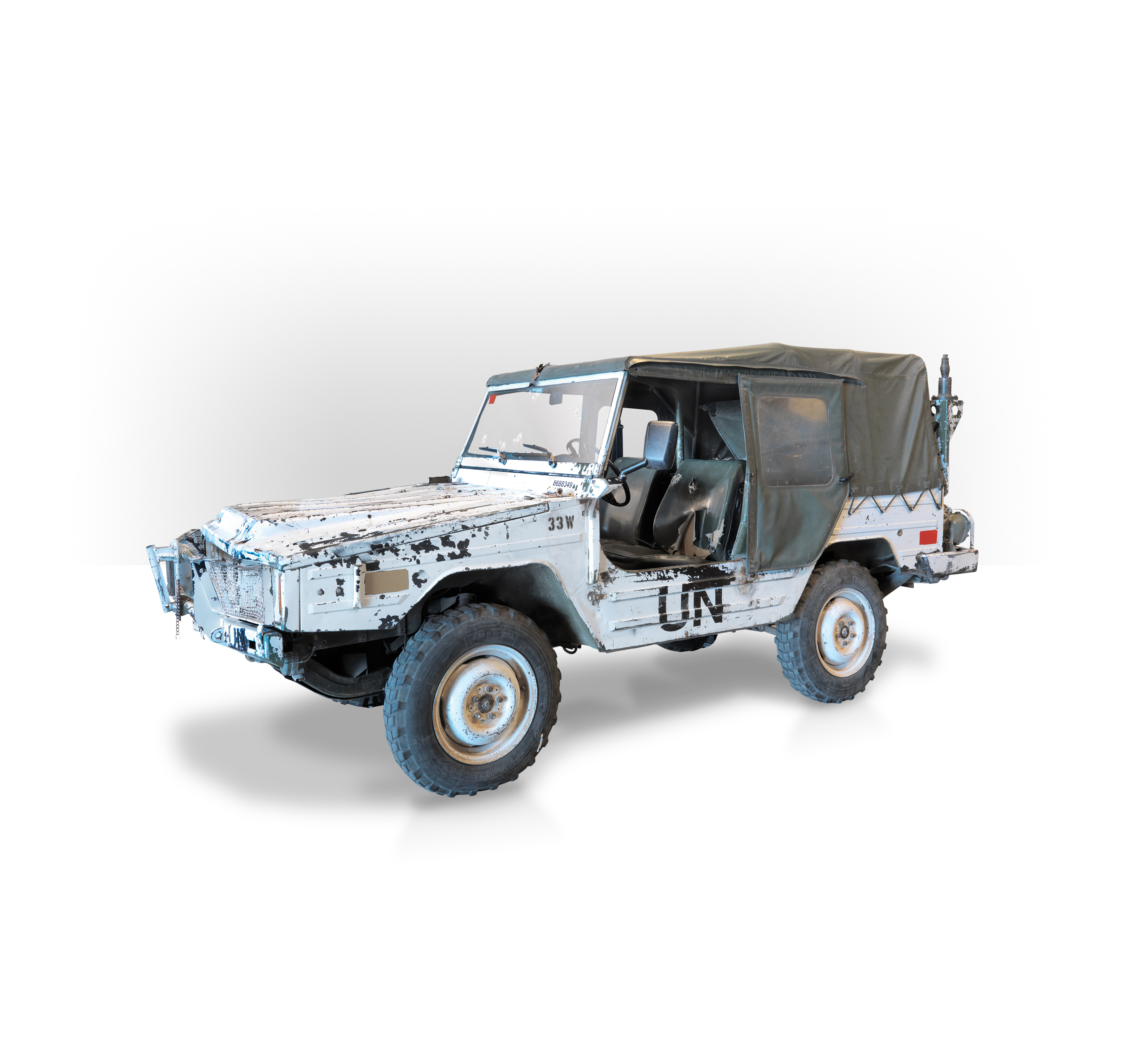 On New Year’s Eve, 1994, Serbian troops fired on Private Philip Badanai and Master Corporal John Tescione as they drove through a Serb-held town in Croatia. Their vehicle was riddled with bullets. Badanai was shot in the back, and Tescione in the head and arms.
CWM / 19950050-001

It was a transition not without difficulty. Public trust in the Canadian military descended into abhorrence following the torture and death of a Somali teenager at the hands of Canadian paratroopers in 1993. Concurrent budget cuts nearly rendered our soldiers, sailors and aircrew invisible, ineffectual and irrelevant before the military was reborn—in the public eye, at least—in the post-9/11 mountains, deserts and villages of Afghanistan.


(WATCH OUR INTERVIEW WITH THE CANADIAN WAR MUSEUM’S ANDREW BURTCH)

In the 296 square metres of newly renovated space, the museum tells these stories in words, pictures and artifacts, both military and otherwise.

There are Atropine injectors from the Gulf War, antidotes to anticipated nerve-gas attacks that never came; a weathered Lee-Enfield rifle that had somehow found its way from Canada to an isolated Somalian village; machetes that had been wielded by Hutus in the horrendous hacking deaths of thousands of Tutsis in Rwanda.

A glass case contains weapons that crew from HMCS Winnipeg seized from pirates off Somalia: a rocket-propelled grenade launcher, a battered variant of the American M16 rifle, and a hammer.

The section on the former Yugoslavia declares “no peace to keep,” illustrating the mass graves of Srebrenica and casting light on the 15-hour firefight that took place in the Medak Pocket in 1993—an incident few Canadians were aware of or likely would have cared about, given the prevailing attitude of the day.

Posted on a wall, the words of Sergeant Grant Greenall expressed the frustrations of many a peacekeeper whose hands were inevitably tied by their masters’ restrictive rules of engagement: “We weren’t allowed to shoot at anybody to protect ourselves unless we were actually taking effective fire.” In other words, Canadians had to get shot before they could shoot back.

Beneath the quotation is the Iltis jeep Sgt. John Tescione and Private Phillip Badanai were riding in on New Year’s Eve 1994 when 20 Serb soldiers opened fire on them in Croatia. A staple of the museum collection since 1995, the vehicle is riddled with 57 bullet holes. Countless more rounds passed through its open sides. Six hit Tescione in the head and arms; Badanai took two in the back. Both survived. 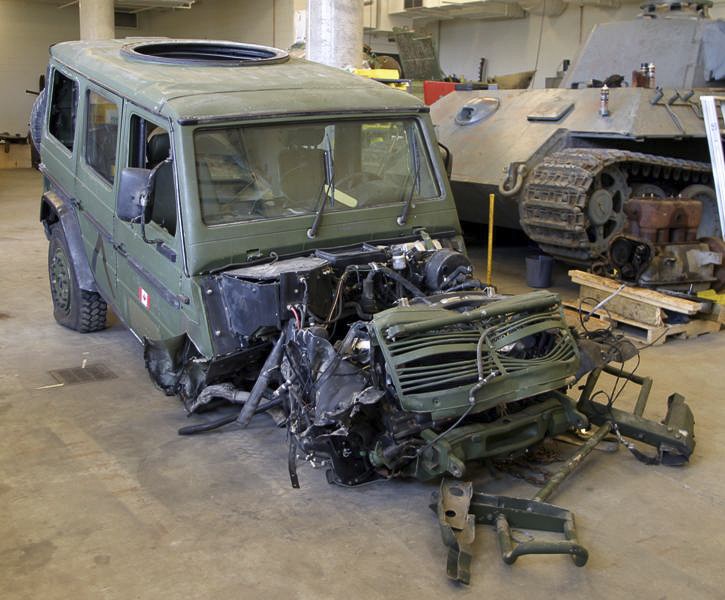 In December 2005, Afghan insurgents detonated an improvised explosive device that destroyed the front of this G-Wagen. Captain Manuel Panchana-Moya, privates Ryan Crawford and Russell Murdock, and a journalist were saved by the vehicle’s protective armour.
CWM / 20060101-001
The gallery wends its way into Afghanistan, where Canada fought its longest war—13 years—at the cost of 158 military lives. And there sit the remains of a G-Wagen, the jeep that replaced the Iltis, half of it destroyed by a roadside bomb, the signature weapon of the Afghanistan War.

The exhibits highlight the heroics and the heartbreaks of Canadian soldiers, including the bloodstained boots Sgt. William MacDonald was wearing the day in 2006 he earned the Star of Military Valour by dodging heavy fire to rescue his wounded captain.

There is a case containing schoolbooks burned by Taliban insurgents southeast of Kandahar in 2002 and a so-called night letter in which Taliban fighters inform the residents of Salavat they have earned whatever reprisals may come their way should they continue to collaborate with NATO forces.

“You don’t have the right to complain,” it says. “This is your last warning.”

There is a photograph of a weeping Corporal Dan Matthews mourning the 2003 deaths of his comrades, Sgt. Robert Short and Cpl. Robbie Beerenfinger, the first Canadians killed in Afghanistan by enemy fire. And there are aluminum flight controls melted after Captain William Fielding’s Chinook helicopter was shot down.

Now, Canadian soldiers have come full circle. They find themselves again on Russia’s doorstep, watching the Latvian border as part of NATO efforts to secure the Baltic states from reoccupation by forces under Moscow’s command.

Far to the east, the nuclear threat is again rearing its ugly head, as the United States and North Korea engage in an increasingly hyperbolic war of words.

How long will it be before the museum will be compelled to update its galleries again, and what will those new exhibits tell us?