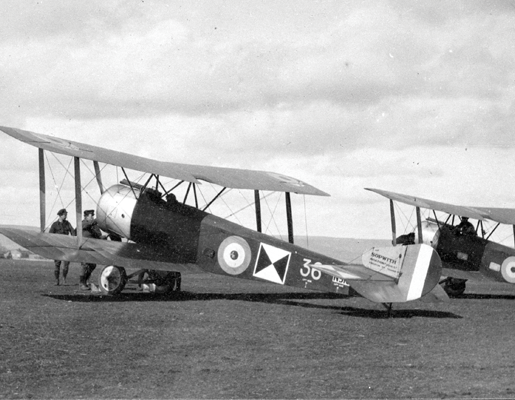 The air war of 1914-1918 is widely seen as one of fighter pilots duelling in pristine skies high above the industrial-scale slaughter below. It is a romantic myth of knights of the air and high-scoring heroes. The air war was, in fact, grim and ruthless. Pilots strove to achieve surprise through advantages of sun, altitude and attacks from behind. Chivalry was easy only when an opponent was dead or captured. A man parachuting from an observation balloon might be strafed or spared.

The British flying services of the First World War never gave official status to the term ‘ace’ and one will never find an authorized list itemizing their scores. This practice recognized the injustice of singling out one category of combatant over another. A French wartime cartoon demonstrated this situation, showing a weary poilu climbing out of a trench, his foot on a dead German and staring at the sky. “I, too, have brought down my fifth Boche,” he muses, “but it will not be mentioned in today’s communiqués.”

Yet we must respect the fighter and scout pilots, and in many cases, their back-seat gunners, for their courage, skill and sacrifice. The story of Stearne Tighe Edwards is particularly striking. His logbook is in the Canada Aviation and Space Museum, but his character is best seen in letters he wrote to his sister. In these, more than in his combat reports or citations, the man shone through. 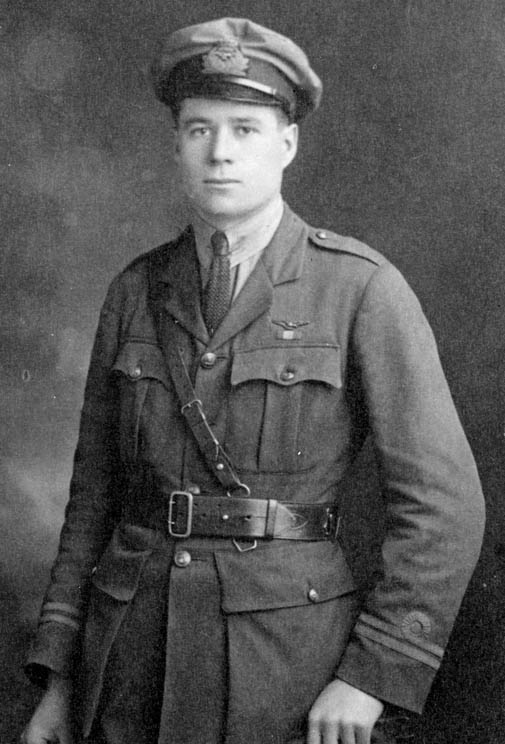 He was born on Feb. 13, 1893, south of Carleton Place, Ont., and was educated and played hockey there. When Brian Costello, author of A Nursery of the Air Force, was asked why the town produced an inordinate number of First World War fliers, including at least three aces, he explained, “The hockey team joined up together.”

Before the war, Edwards was a railway construction worker who learned to play poker the hard way and became a formidable opponent. He never drank or smoked, whether by choice or conviction is uncertain. When the war broke out, he walked 200 miles to the nearest railway station at The Pas, Man. Once back in Carleton Place, he resolved with three friends to join the Royal Naval Air Service (RNAS). A flying certificate was required at that time, so they travelled to the Wright Flying School in Dayton, Ohio, and took rudi-mentary flight training for the certificate. Then it was back to Ottawa where they were accepted as Temporary Probationary Flight Sub-Lieutenants and their expenses were repaid. On Nov. 15, 1915, Edwards sailed to England for proper pilot and combat training. His comrades followed on the 22nd.

He tried to avoid getting too far ahead of his friends, including Arthur Roy Brown, but he was a natural flier who progressed quickly through RNAS flight training, gunnery and bomb-dropping exercises. Early in July 1916, he flew to France to join No. 3 (Naval) Wing, which operated Sopwith 1½ Strutters from Luxeuil-les-Bains in eastern France. Although nominally a naval unit, No. 3 Wing was miles from the sea, about to embark on pioneering strategic bombing. The Sopwiths were in two versions: two-seat fighters (to serve as escorts) and single-seat bombers that carried up to four 60-pound bombs. Many Canadian members of the RNAS had arrived from North America in the winter of 1915-16 and No. 3 Wing counted more than a dozen on strength. Edwards was a bomber pilot.

His first raid was on Oct. 12, 1916, as 30 French and British aircraft attacked the Mauser works at Oberndorf am Neckar, Germany; he was airborne in formation for almost four hours. He would take part in five further attacks before March 1917, when he was posted to No. 11 (Naval) Squadron to train as a fighter pilot, then to No. 6 (Naval) Squadron to put his teachings into practice. He hated it, considering the commanding officer to be a tyrant. The solution came via another posting, to No. 9 (Naval) Squadron, in August 1917. One perk here was to be flying Sopwith Camels, one of the most effective fighters in British service. Another was to be reunited with Brown, his friend from Carleton Place and the Wright Flying School. 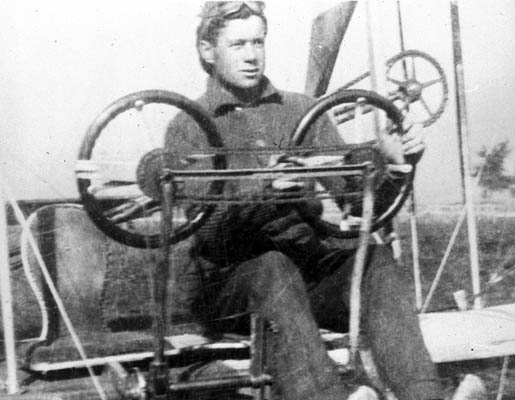 In 1915, Edwards trained at the Wright Flying School in Dayton, Ohio, in order to qualify for the Royal Naval Air Service.
Photos courtesy of Hugh A. Halliday

Edwards’ letters home say little about the war but much about the man. They exude vitality and humour. He was modest about his exploits, and he regarded combat as his job. He had a real horror of killing, even of enemies. He wrote a prayer asking forgiveness for having taken the life of a foe, and for the safe return of himself and his comrades. He was by all accounts a Muscular Christian, reminiscent of the principled Eric Liddell, the Scottish athlete and missionary portrayed in the film Chariots of Fire. Yet he also lived fully, attending London theatres while on leave and making many friends.

Edwards and Brown were inextricably bound to one another. Both became successful fighter pilots. They returned together to Carleton Place for Christmas in 1917. Both would be awarded the Distinguished Service Cross and Bar. Both would serve in combat until they broke.

Not all of Edwards’ actions were decisive. His first combat in No. 9 (Naval) Squadron was on Aug. 18, 1917, when he set a German aircraft on fire. The enemy extinguished the flames and escaped. On Sept. 3, he attacked a two-seater Aviatik. The enemy aircraft was seen to go down in a nose-dive with the observer collapsed in the rear cockpit. Then, on Sept. 23, 1917, he destroyed two Albatross fighters in a single sortie. The first crashed into the sea. The second was attacking another Camel when he pounced. It turned on its back, went into a dive and shed its wings at 8,000 feet.

Edwards was recommended for his first DSC on Sept. 30; it was gazetted on Nov. 2, 1917. By then, he had been credited with three enemy aircraft destroyed and four more ‘out of control,’ a poorly defined phrase that bedevils those who try to calculate scores.

He returned from Canadian leave on Jan. 30, 1918. Brown had been named B Flight Commander, Edwards as C Flight Commander. Other changes were coming: on April 1, 1918, as the Royal Naval Air Service merged with the Royal Flying Corps to become the new Royal Air Force, RFC ranks replaced naval ranks. ‘Naval Nine’ was re-designated No. 209 Squadron, and Flight Lieutenant Edwards became Captain Edwards.

The German spring offensive made life very dangerous and complicated. Between March 21 and April 21, the squadron had to change aerodromes six times as the enemy advanced. On two occasions, they were under shellfire as they evacuated their base.

The air fighting was brutal and relentless. Between Feb. 3 and May 19, 1918, Edwards was credited with three more enemy aircraft destroyed, four out of control and two captured (i.e. forced down behind British lines). The man who hated killing had to be ruthless. A portion of one report from April 2, 1918, described a hostile machine that stalled and dove after his attack. “I followed for 3,000 feet, and as the enemy aircraft seemed to be regaining control, I opened fire again,” Edwards ​reported. “The enemy aircraft turned on its back and went into a vertical dive and immediately broke up, the pieces narrowly missing my machine.”

Edwards was not flying on April 21, the day Brown pursued and fired on a Fokker Triplane, which in turn was pursuing another Camel of No. 209 Squadron. The Triplane pilot, Manfred von Richthofen, was killed, and the action is debated to this day. Was the fatal bullet fired by Brown or by an Australian machine gunner on the ground? If Brown did not kill the Red Baron, then he drove him onto the guns of those who did. Soon afterward, Brown collapsed with ulcers and was posted away. Edwards’ turn came on May 23, when he suffered a nervous breakdown and was hospitalized. On June 21, 1918, The London Gazette announced that he had been awarded a Bar to his DSC.

Leave in Britain followed, then postings in Yorkshire as an instructor to training units with No. 2 School of Aerial Fighting and Gunnery in Redcar, and with No. 38 Training Depot Station in Tadcaster. Edwards began to consider his postwar prospects, including a career in the Royal Air Force. Meanwhile, his logbook recorded dozens of sham battles and instructional flights. His specialty was helping low-achieving students. At Tadcaster, he was given charge of some American trainees, whom he ruled with an iron hand and complete fairness. They were devoted to him. Superior officers congratulated him on three occasions. Off-duty, he often piloted a Sopwith Pup, cruising the sky for the sheer joy of flight.

Suddenly, Austria and Turkey capitulated, the German Navy mutinied, the Kaiser fled into exile, and on Nov. 11 the war was over. The next day, Edwards took off in the Pup, breathing the cool air of peace for the first time in four years. He flicked into a spin, like a hundred times before. This time he pulled up too late, dragging a wingtip on the ground. Suddenly the airfield was alive with running figures.

He was unconscious when they lifted him from the wreckage and rushed him to York Hospital. Each day brought some improvement, but the doctors looked at one leg, despaired and finally amputated below the knee. The shock was too much. His life ended in the early hours of Nov. 22. His personal effects included his poker chips, a dog-eared prayer book and a photograph of a girl, but who she was and what she had meant to him remained a mystery. 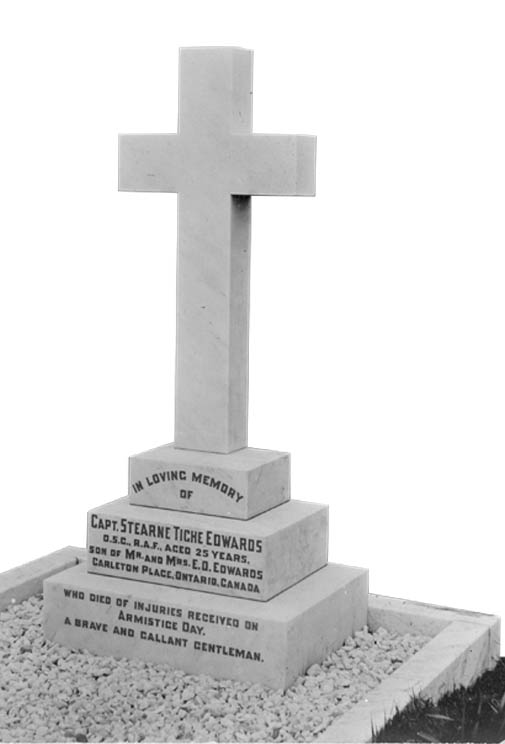 Edwards is buried at Tadcaster in North Yorkshire, England, with a tombstone describing him as “a brave and gallant gentleman.”
Photos courtesy of Hugh A. Halliday

His tombstone in Tadcaster erroneously states that he “died of injuries received on Armistice Day.” The mistake has been repeated elsewhere. In 1920, a memorial plaque was unveiled in the Carleton Place Presbyterian Church. It reads: “In proud and loving memory of Captain Stearne Tighe Edwards, DSC, Royal Air Force, who died of injuries received on Armistice Day, while in the service of his country. Faithful even unto death.”

In a fitting token of friendship, the man who drew the veil was Arthur Roy Brown.