Home » Military History » Navy » Over The Side: The Courageous Boarding Of U-94

Over The Side: The Courageous Boarding Of U-94

On board a crippled U-boat, two brave Canadians—a young gunnery officer and a petty officer—faced increasing peril as they worked against time to capture the doomed sub.

By midnight local time on Aug. 28, 1942, the battle for convoy TAW-15 was underway in the Windward Passage, east of Cuba. 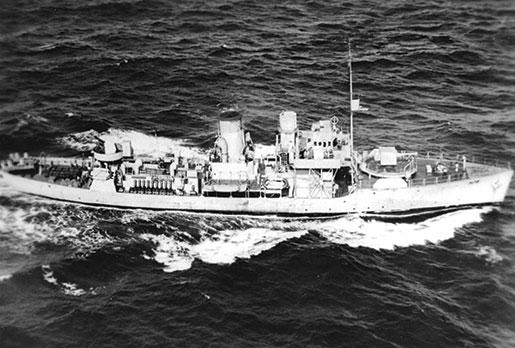 It started when a United States Navy aircraft attacked U-94 just as it was preparing to fire torpedoes. His Majesty’s Canadian Ship Oakville responded quickly and caught the U-boat on the surface. Two attempts to ram the sub failed, but the U-boat was struck heavily by Oakville’s fire, losing her 88-mm deck gun to a direct hit from the corvette’s four-inch gun.

As Oakville slipped by U-94 the second time, and amid a shower of Coke bottles and epithets thrown by idle crewmembers, Lieutenant-Commander Clarence King ordered his depth charges away: at least one exploded directly under the U-boat. The blast did enough damage to U-94 for her captain, Otto Ites, to order his crew to abandon ship (Bullets, Bombs And Coke Bottles: Battling A U-boat In The Caribbean, November/December 2014).

With U-94 now nearly stationary, Oakville was finally able to ram it squarely aft of the conning tower. Ramming U-boats was a perilous tactic, especially for a corvette. At high speed the bow of a corvette—and other escorts for that matter—tended to rise, leaving little in the water to strike the blow. Moreover, the gently curved bow of a corvette was designed to ride over obstacles, not cut through them. If the speed and angle were not just right, the ramming vessel simply rode right over the sub, stripping away external fittings in the process and leaving the tough pressure hull of the sub little worse for wear.

Oakville’s crew later reported three distinct shocks as they rolled over U-94. These probably came from the initial contact of the bow on the sub, the sheering off of Oakville’s asdic dome and oscillator, and the propeller dragging over the sub’s hull. What this did to U-94 remains unclear: her damage was already so bad that she was being abandoned.

Hal Lawrence, Oakville’s young gunnery officer, recalled that after the ramming U-94 “wallowed, and stopped.” King noticed this too, and barked “away boarding party!” followed by “Come on Lawrence! Get cracking!” King wanted to capture the sub, so the boarding party had to act fast. What followed was something of a tragic comedy, at least the way Lawrence told it. 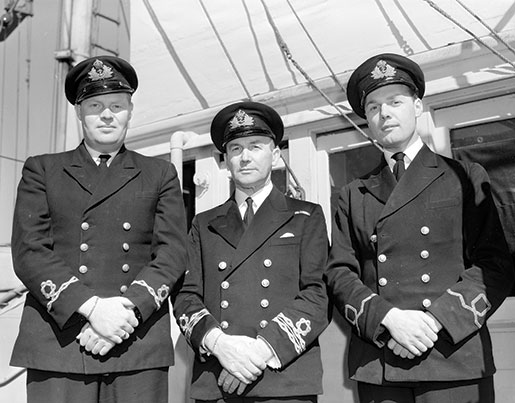 By the time Lawrence arrived at the boarding party locker all 12 men pre-assigned to that duty were struggling to load up their gear. For Lawrence this included an inflatable lifebelt, then, “You need a pistol. Hand grenades might be handy: I had two,” and a gas mask. He also had six feet of chain tied to six feet of rope: the chain would be secured to the conning tower and thrown down through open hatches to keep the U-boat from submerging. A flashlight and a pistol hung from his neck by lanyards. “The engineer has a bag of tools for his own mysterious purposes,” Lawrence wrote in his memoir titled A Bloody War. There is no mention of cutlasses.

The boarding party was just about to head for Oakville’s boat when King bellowed, “Never mind lowering the boat, I’ll put you alongside.” As King eased his corvette towards U-94, Lawrence and his band gathered on the portside of the fo’c’sle, preparing for the eight-foot leap onto the crippled U-boat. As they waited, the captain of the four-inch gun worked to clear a misfire. This was done by gingerly withdrawing the charge, carrying it to the side and throwing it in the sea. 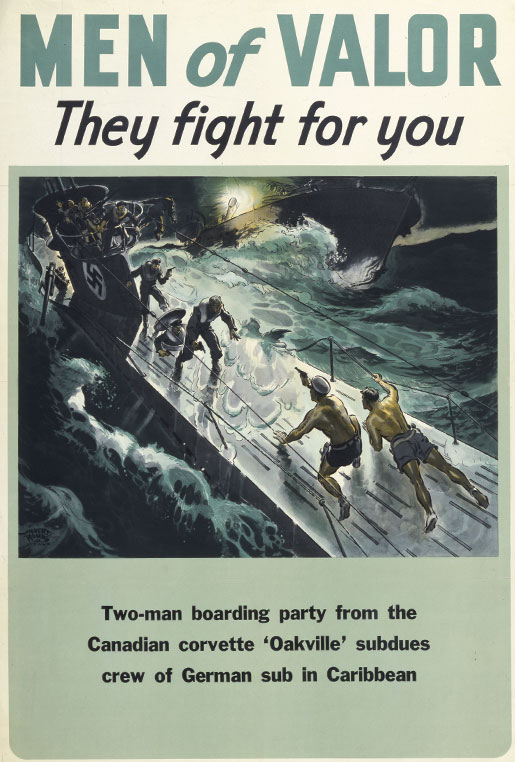 Lawrence and the rest of the crew nearby watched this with more than passing interest, but it was safely done. Then, in the euphoria of the moment, the gun crew set about clearing the round in the barrel by reloading and firing the gun. To his amazement, Lawrence could hear the loading drill as he leaned over Oakville’s side to watch her approach U-94. The boarding party was only 15 feet from the muzzle when the gun went off. The blast blew all 12 men over the edge of the fo’c’sle and onto the deck below. Lawrence woke a few moments later with Petty Officer Art Powell slapping his face and saying, “Come on, sir, we’re nearly alongside.” Concussed by the blast, bleeding from his nose, and lumbered by equipment, Lawrence staggered to his feet. “Well, come on then,” he said. “Over we go!”

Lawrence was the first to land on U-94. The shock of landing snapped his belt and his shorts fell off: he kicked them into the sea. Powell followed right behind him. Now clad only in “a pistol, two hand grenades, a gas mask, a length of chain, a flashlight and a lifebelt,” Lawrence ordered Powell to head for the “bridge.” The rest of the boarding party remained stranded on Oakville as the corvette lost power and drifted away. The ramming had stripped away sections of her bottom plates, rupturing fuel and water tanks, completely flooding the asdic compartment and filling the after boiler room with seawater nearly to the point where her boiler might blow. So the crew of Oakville could only watch from a distance as the drama unfolded on the stricken sub. 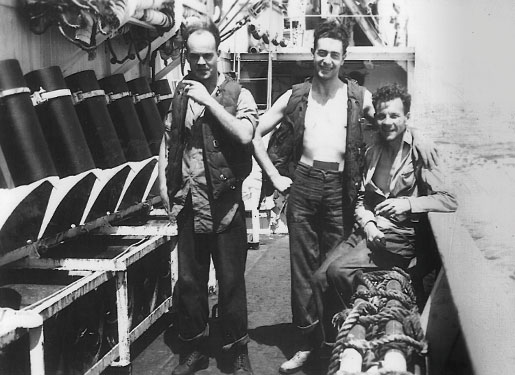 As he struggled towards U-94’s conning tower, Lawrence was swept into the sea by a wave, and was dragged back aboard (less the six feet of chain) by Powell. It was just as well they were delayed because Oakville machine gunners began to plaster U-94 with bullets again. That fire seems to have stopped by the time Lawrence and Powell finally reached the conning tower. The two men found that the conning tower was riddled by bullets and littered with broken glass from Coke bottles. Its hatch was also blasted open.

Their first encounter with two German crewmen, almost certainly Ites and one of his officers, went well enough. They were directed aft and then just jumped overboard. Two others coming out of the conning tower hatch were not so fortunate. “Get below!” Lawrence shouted. But, as he admitted later, his command was not in German. In his defence, Lawrence observed that a pistol three feet from your face “is international for ‘stop.’” The German did not. Lawrence shot him and Powell shot the next man out: both fell overboard. Too late, Lawrence and Powell realized that the men were probably trying to surrender. While Powell stood over the hatch with his pistol to keep the rest of the crew below, Lawrence went aft to another open hatch and was nearly washed into the sea again. Looking down, he found the compartment fully flooded.

Content that they were not going to be “outflanked” from the stern, Lawrence ordered Powell to allow the Germans to come up. They refused. Lawrence knelt at the open hatch, shone his flashlight on his face, smiled and then told them to “Come on up. It’s all right. See—no gun!”

All the Germans probably understood was “Come.” They boiled out so quickly that someone was soon standing on Lawrence’s flashlight, tightening the lanyard to a choke hold around his neck, while his pistol banged painfully against his shins. “I had certainly lost command of the situation,” Lawrence concluded. But Powell had not, and he quickly mustered the PoWs on the after portion of the conning tower. It was now time for Lawrence to go below. 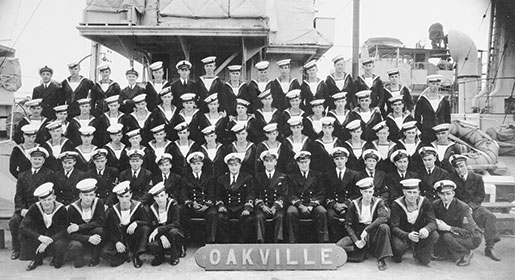 U-94’s conning tower was dark, but Lawrence’s light quickly revealed nothing of interest. Signal equipment, code books, logs, etc., all appear to have gone over the side. The next step was to slip down into the control room below, to check on valves and try to save U-94. Lawrence had some idea of what the valves did: numbers one, three and five were main ballast, two and four were trim tanks. The control room was pitch-black, chest deep in water and Lawrence’s flashlight was now growing dim.

As U-94 wallowed, the water inside the sub sloshed back and forth, carrying Lawrence with it as he checked gauges and tried to figure out instruments. At times he was standing, at other times treading water, and his flashlight was good to about a foot. Two large thumps signalled collapsing bulkheads. Finally, Powell yelled down through the open hatches. “Come up sir, she’s sinking!”

Lawrence swam to the ladder and shouted to Powell to “Get them over,” and with a jerk of his thumb the PoWs jumped into the sea. Powell followed. Lawrence paused on the conning tower to take a look around, heard the dull thump of torpedoes striking ships in TAW-15 and saw the flames rising in the dark sky. Then he slipped off and swam away. U-94 raised her bow in the water a few minutes later and went down: he had gotten off none too soon.

By then King had asked the USS Lea to look for his boarding party. Lawrence hoped someone would come. He was now wearing only his lifebelt. There was, he said, much blood in the water, and sharks and barracuda were known to be active in the area. “You have no idea what confidence a pair of cotton shorts can give you,” he wrote later, “or how I missed them.” Lawrence swam on his back, using one hand to protect his “vital parts.”

Ites and one of his officers swam to Oakville, and her boat picked up five more Germans. USS Lea recovered 21 PoWs as well as Lawrence and Powell. “It was dark and suddenly there was a light on us and we heard a motor launch approaching,” Powell recalled. “I heard a call, ‘Where are those Canadians?’ and finally they were close enough and they picked us up before the Germans.” It took some effort on Lawrence’s part to convince his American rescuers that he was a Canadian naval officer. He was hustled onto the quarterdeck of Lea along with the Germans, protesting the whole way. Finally, there was a “steady and ever-rising stream of vituperation”—a burst of obscenity learned as a midshipman in a Royal Navy gunroom that called into question the moral integrity of the U.S. sailors’ mothers, “the diseases of their fathers, the certainty of animal ancestors and more”—led to an audience with the destroyer’s captain. Some clothing, coffee and a quick return to Oakville followed.