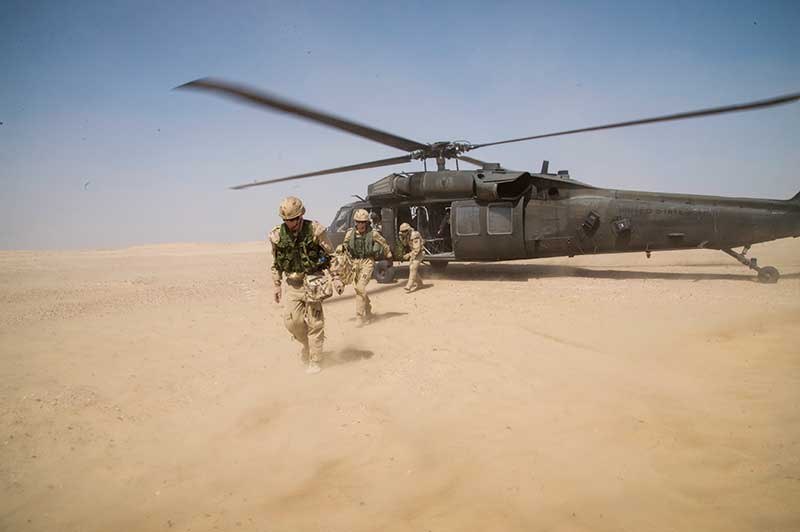 The world is getting dustier and grittier thanks to global warming.

As water supplies dry up, conflicts over resources and a liveable environment are likely to increase, requiring military action or humanitarian aid. And given recent history, it’s a sure bet it will be the grittiest and dustiest places where the Canadian Armed Forces will serve.

That could mean more lung problems.

Allied forces had a taste of this issue during the Persian Gulf War in 1990-1991 and again in Afghanistan, when troops inhaled dust from sandstorms, plumes from vehicle traffic and smoke from burn pits and oil wells, among other pollutants.

These substances break down into smaller particles— so small, in fact, they bypass the body’s natural defences. These microscopic solids or droplets lodge deep in the lungs, causing inflammation and leading to increased damage.

A 2011 U.S. study found that respiratory illnesses, including chronic bronchitis, emphysema, sinusitis, chronic airway obstruction and chronic obstructive pulmonary disease, were seven times higher in veterans who served in the Gulf War compared with undeployed veterans. Notably, in some cases, no problems showed up on CT scans, but biopsies revealed lung damage, including scarring of the small airways that leave a person feeling like they are sucking air through a straw during even moderate exertion.

Similar results have been reported by many nations after the war in Afghanistan, but the U.S. has a much larger pool of troops to study—2.7 million served in Iraq and Afghanistan—and proportionally more military medical health researchers than its allies, including Canada.

Many of the more than 5,000 Canadian troops who served in the Gulf War did not return unscathed. It was, retired military nurse Louise Richard told the House of Commons Standing Committee on Veterans Affairs in 2013, “the most toxic battlefield ever known to mankind.”

Sleeping quarters and work areas were drenched in pesticides. And personnel breathed in toxic smoke from 800 oil wells burning in Kuwait and military burn pits, which disposed of plastics, unexploded ordnance, batteries, medicine, dead animals, and human and medical waste. Richard went into the Gulf War fit and healthy and returned chronically ill.

In response to health problems arising from Gulf War service, the CAF established a health protection directorate to monitor environmental factors posing health risks to deployed members, and to recommend ways to reduce the risks.

Sand and dust, the bane of service in the desert, were determined to be a big source of such health issues.

CAF health hazard assessment teams annually monitored air quality during the war in Afghanistan. One breathable particulate they consistently listed as “a compound of potential concern” was crystalline silica (found in sand and stone) that was 2.5 micrometres or less in size, too small to be seen by the human eye. For comparison, the diameter of a human hair is between 50 and 70 micrometres.

Deserts are expanding, and sand and dust storms are becom-ing bigger and more common, particularly in the U.S. high plains, central Asia and Australia. Global annual dust emissions have nearly doubled during the last century.

The leading edge of a dust storm can be 1.6-kilometres high and particles measuring five micrometres or less are carried on the wind thousands of kilometres beyond the clouds. Storms are estimated to carry two billion tonnes of dust into the atmosphere every year.

The Asian and Pacific Centre for the Development of Disaster Information Management has called for regional action plans to reduce risk and strengthen resilience to what it calls “the negative transboundary impact of sand and dust storms.”

Dust from the Sahara Desert is carried to Brazil; dust from the Gobi in Mongolia and China wafts east over western Canada and the U.S.; storms in Australia transport dust and soil to Antarctica; storms in the four U.S. deserts cause the U.S. National Weather Service to broadcast dust-storm warnings regularly in western
and southern states.

We are all breathing in more dust, but Australian researchers
suggest “factors unique to military service…may increase the vulnerability of military personnel to respiratory health risk.”

Those factors, of course, include the pall from burn pits and plumes raised by military vehicles, but the Australians say physical exertion and high levels of psychological stress may also play a role.

It only makes sense. Members of the military work regardless of the climate or environmental conditions, and exercise causes deeper breathing. Stress and fear, natural responses to conflict, cause hyperventilation, or rapid deep breaths. In both cases more air—and more particulates—are inhaled.

The fog of war is often dust, which on a modern battlefield may be seeded with metallic flakes to foil infrared detection systems. It’s “dangerous to breathe, requiring troops to wear respirators in combat,” says DARPA, the U.S. Defence Advanced Research Projects Agency.

Scientists have already designed lightweight, pressurized military respirators with powerful filtration systems that look like the helmets worn by storm troopers in Star Wars. They’re designed for troops to wear when they face chemical, biological and nuclear hazards. One day, sand and dust may be added to that list.

All Posts
PrevPrevious ArticleTime for change