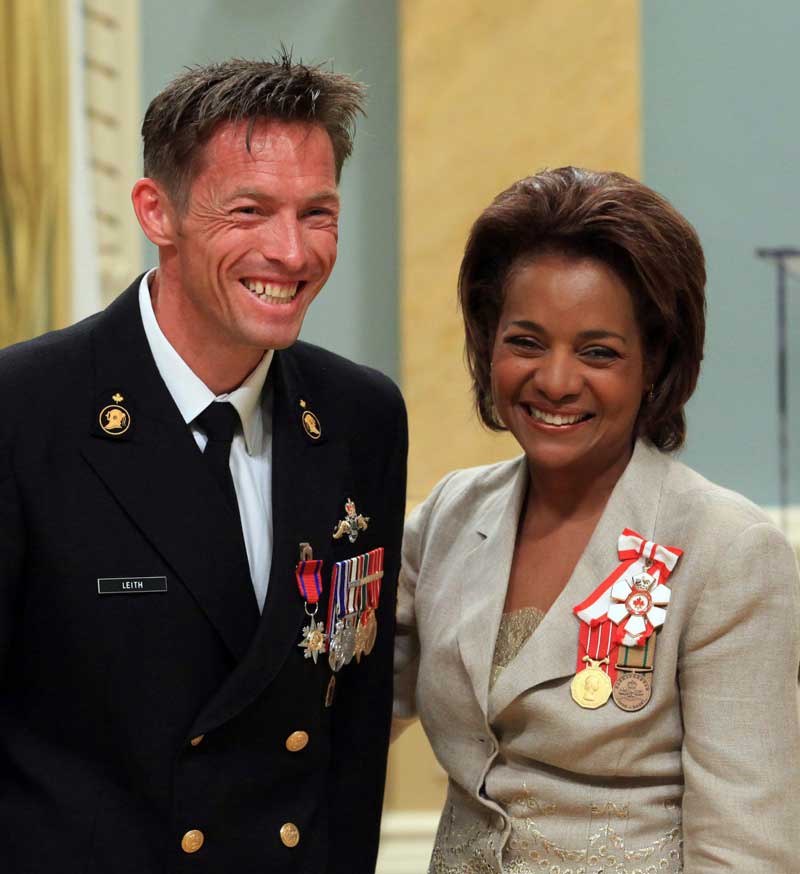 “A good dose of fear keeps you sharp,” the navy explosives expert said in an interview with Darlene Blakely of Lookout, the Canadian Forces Base Esquimalt newspaper, after the announcement that his actions had earned the Star of Courage.

On his first mission to Afghanistan, serving alongside 2 Combat Engineer Regiment, Leith was on his regular morning duty clearing supply routes west of Kandahar City, driving a Bison armoured vehicle packed with the tools of his trade­, including robots and X-ray equipment.

The Bison hit an improvised explosive device (IED) and was propelled more than nine metres through the air.

A U.S. bomb removal crew was working nearby, and helicopters were circling overhead. Within minutes, U.S. medics came to the Canadians’ aid.

Corporal Jim Lightle, who had a compound leg fracture, was loaded into a helicopter for the 19-minute flight to the battlefield operating theatre.

“I discovered an area of disturbed ground and I started to investigate it, I started to excavate a little bit. I knew right away…it appeared to be a large explosive,” he said in an interview with Allan Woods of the Toronto Star.

He had found two anti-tank mines and more than 40 kilograms of explosives linked to a napalm mixture about half a metre away, with a pressure-sensitive plate meant to trigger an explosion.

All Leith’s gear, including equipment for remote detonation, had been destroyed in the blast.

“I really had nothing left except your old standards: my wits, skills and my good old trusty bayonet that the engineers had given me,” he told Woods. “I was kind of laughing. I was like, ‘If this goes up … I won’t feel anything it’ll be so quick.’”

He crawled toward the bomb and using only his bayonet and his skills as a navy clearance diver, he dismantled the device in about an hour.

He crawled toward the IED. Still, the only equipment he had was his bayonet.

He was a bit surprised by the recognition of his action, after all, IEDs were a staple of the Afghanistan experience.

As a clearance diver, Leith was trained in the use and disposal of explosives both underwater and on land.

Such divers were first used during the Second World War to clear harbours of mines and obstructions, such as sunken ships and boats, with underwater explosives.

Today, the Canadian Armed Forces has about 120 clearance divers and 30 clearance diving officers. One of their subspecialities is IED disposal, which explains how a navy diver found himself dismantling a bomb in Afghanistan.

Leith came across another IED, too.

Worried the enemy would return, he decided to disarm it. His colleagues formed a protective barrier around him, about 100-metres distant.

“These IEDs are technically not very sophisticated,” he said in the Lookout interview, and taking it apart would provide intelligence on the maker’s method.

He crawled toward the IED. Still, the only equipment he had was his bayonet.

“I was just doing my job,” he said again of the feat. “That’s what I’m supposed to be doing over here.”

All Posts
PrevPrevious ArticleHaig & Ludendorff
Next ArticleOn this date: October 2022Next