“Any veterans out there run into snakes while serving?”

Thus began a thread on Facebook’s “Vietnam: Helicopter War” page that took readers on a raucous thrill ride through the jungles of Southeast Asia.

The post included a picture of troops holding a fat snake at least six metres long, evidently dead. A well-travelled veteran identified it as a Burmese python.

“We came across a large python—had a head the size of German shepherd,” wrote Larry Kirby, an infantryman in Vietnam in 1968-69. “It had been badly hurt by an airstrike. The CO, knowing we had a guy who was deathly afraid of snakes, told this person he needed his best man to check out a noise just ahead.

“The poor guy saw this massive wriggling snake—dropped his gear and ran off. We…had to find the guy—so half the company was wandering about calling his name until we found him. He was OK but after that he knew not to trust anyone who said ‘we need our best guy.’”

“We came across a large python—had a head the size of German shepherd.”

The page has 28,000 followers, many of them veterans of the 10,000-day war which, among other things, revolutionized the military’s use of helicopters. Pilots, crew chiefs, door gunners and medics, along with the troops they delivered to and evacuated from battle zones, are among those weighing in on many topics.

But none more than the query about snakes posed by Sean Fos. It had garnered more than 500 likes and 200 comments in three days, many of them on the “two stepper,” or “two step”—the bright-green, yellow-bellied bamboo pit viper.

It was described on the FB post as a “very gnarly snake.” The story among troops in Vietnam was that if the bamboo pit viper bit you, you had two steps before you were dead. It’s not true.

It is potentially lethal, but the bamboo pit viper is not even the most venomous snake in Vietnam—there are several kraits, for example, more dangerous than the two step. The Americans, confusingly, called them the “three step.” 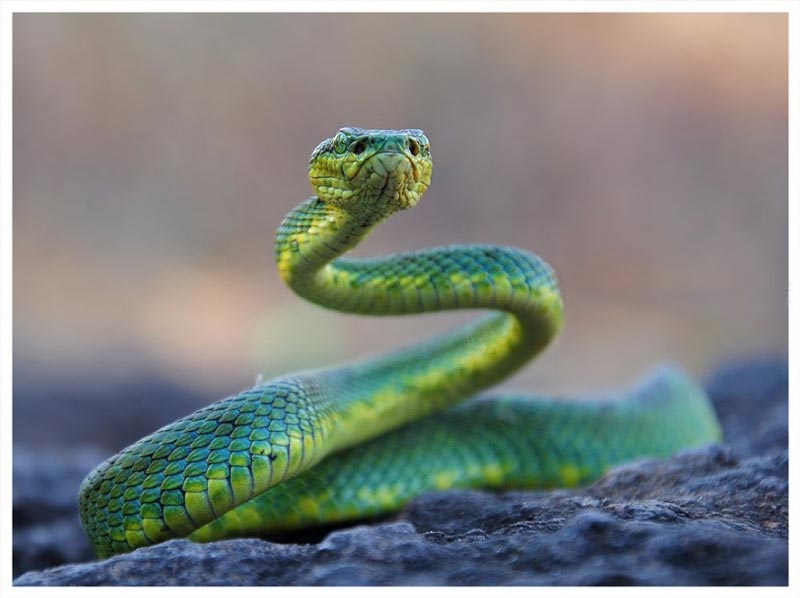 The bamboo pit viper was known by American troops in Vietnam as the “two step.”
Evan Pickett/Wikimedia
The verdant country is also home to king cobras, various vipers and other snakes—200 species in all, about a quarter of them venomous. There’s also the longest snake in the world, the reticulated python. Like the Burmese python, it’s not venomous but it will squeeze you to death and eat you if the inclination strikes.

The United States Archives and other sources suggest that between 25 and 50 American soldiers a year were bitten by snakes during the war in Vietnam. Some 10,786 American soldiers died of non-combat causes, including 9,107 by accidents and 938 due to illness. Snake bites were not specified. 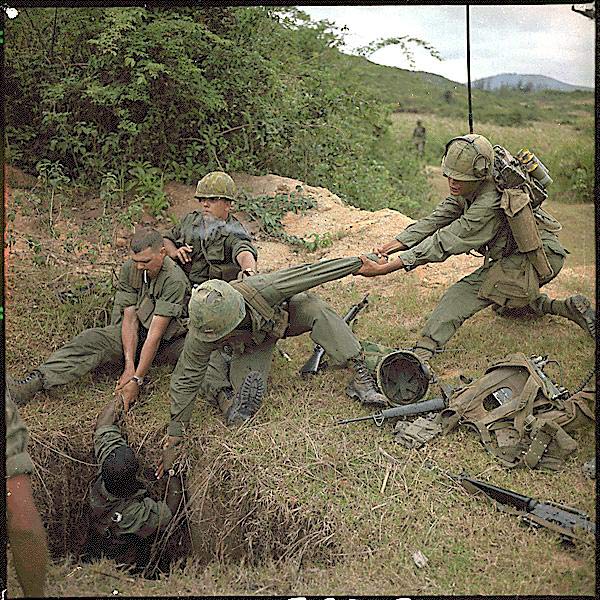 American reconnaissance troops lower a tunnel rat into his office during a U.S. Marine operation northwest of Huế, South Vietnam, in 1966. North Vietnamese fighters would often booby-trap the tunnels with venomous snakes.
U.S. National Archives and Records Administration
It may not have been the most lethal, but the two step was the most popular biological weapon wielded by North Vietnamese Army troops and Viet Cong guerillas, who would hang them in the ceilings of tunnels in Củ Chi and elsewhere. They’d rig them to a contraption that, once tripped, would drop the snake onto the head or back of a crawling American soldier, whose unenviable job was to kill whoever was at the other end of the underground corridor. These troops were known as tunnel rats.

“I was crew chief flying Dustoff (a medical evacuation chopper),” wrote Neal Caspersen of Pensacola, Fla. “I picked up three in a year bit by the little green vipers; all were alive when we dropped them off. One was a Vietnamese girl about 7ish.

“When we loaded her someone handed me a Styrofoam coffee cup; in it was the dead little green viper, the color was striking and it was so small.”

Thomas Barnes of Shady Cove, Ore., was a chopper pilot and battalion commander in the U.S. Army. His story was short and not so sweet.

“Lost tail rotor in OH-23G while low and slow, crashed in wet rice paddy going backward after spinning about 270 degrees,” he wrote. “When everything came to a stop, gunners got out, I shut down and I was trying to radio and saw this little green two stepper heading for the ship, I bailed out and got on dry ground. Didn’t want to mess with that one.”

Then there were the cobras. At up to four metres long and distinguished by their massive hoods, which they spread when agitated, king cobras are the world’s longest venomous snakes.

One morning, a pilot found a large cobra curled up on his seat.

“I was walking point with our Vietnamese scout when I noticed what looked to be a concealed fighting position and crept toward it,” wrote Kregg Jorgenson. “It was a few feet high and maybe five or so feet in length. I was starting to dig through it when our scout repeatedly waved me back.

“The ‘fighting position’ wasn’t [a fighting position]; it was a king cobra nest. Didn’t see the damn snake and didn’t have constipation for a few days afterward, either.”

At a divisional basecamp in 1968, on-call UH-1 helicopters were parked with doors open to facilitate rapid entry for scrambling crews. One morning, a pilot found a large cobra curled up on his seat. A replacement aircraft was brought up and the cobra was allowed to nap until it left of its own accord.

Jim Hudson of Springfield, Ohio, was aboard a Huey when the pilot practically jumped out of his seat in midflight. “Thought he had been hit when actually a snake crawled into the bubble at his feet. That was a fast landing.”

Door gunner Vaughn kept a baby cobra as a mascot/pet in a cooler under his cot.

Jon Haigh encountered a three-metre-plus cobra in an outhouse. Jim Ensminger (and probably many more) stepped on one in a rice paddy. Richard (Dick) James had one living in his quarters at the U.S. special forces detachment in Vĩnh Gia.

For some troops, living with snakes was a trade-off. Left alone, snakes tend to be shy and keep to themselves—and they eat rats. 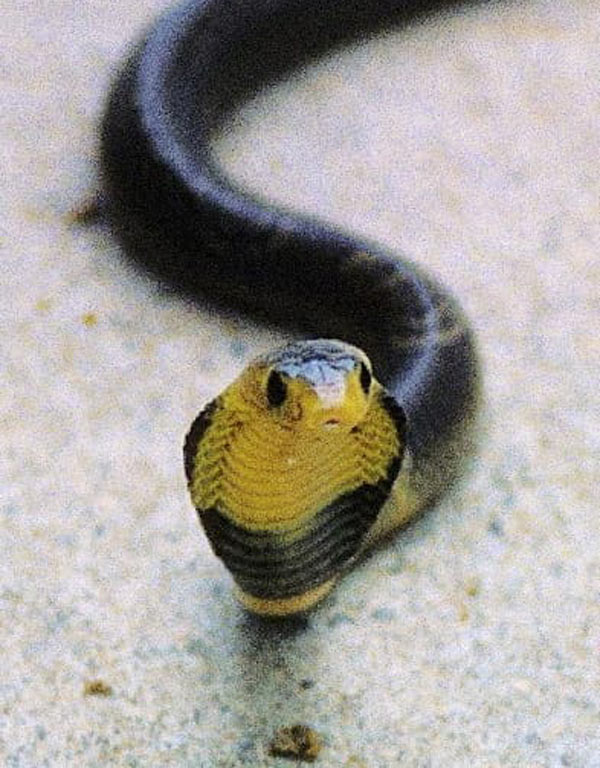 During his tour in Vietnam, Dale Vaughn, a door gunner with the 114th’s Cobra Platoon, kept a pet baby cobra.
Dale Vaughn/Facebook
Dale Vaughn of Redwood City, Calif., was a door gunner with the 114th Assault Helicopter Company, 1st Aviation Battalion, in 1966-67. His gunship platoon was named the Cobras. Vaughn kept a baby cobra as a mascot/pet in a cooler under his cot. It had a perfect white ‘O’ on the back of its head, so he called it ‘O.’

“I didn’t pet it too much as it’s just as lethal as an adult, although it’s very difficult for them to inject their venom in you as they have rear embedding fangs and not folding like a rattler,” said Vaughn. “They need to almost chew on you. Some asshole poured whiskey on it and killed it.” 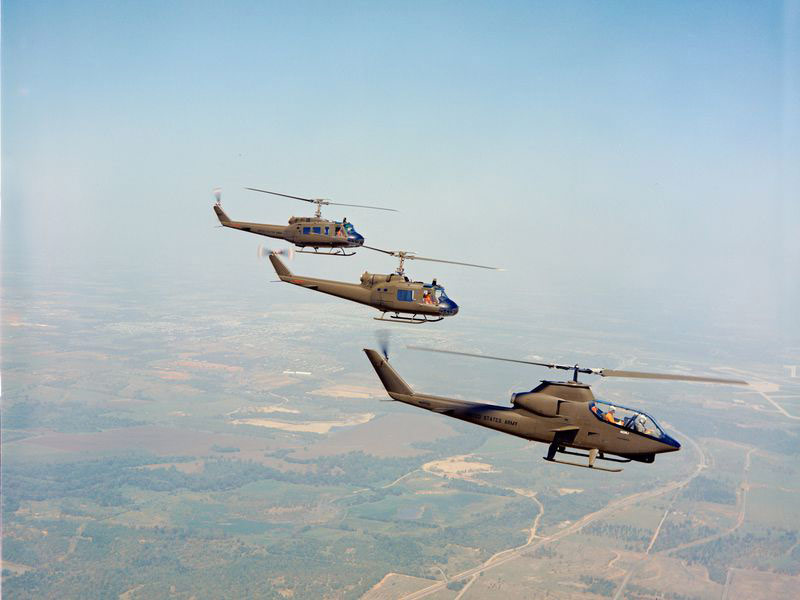 Bell Helicopter’s prototype for the AH-1G Cobra flies ahead of two UH-1 Hueys, the aircraft it was designed to protect.
Bell Helicopter Historical Archives
Bell Aircraft came out with the AH-1 Cobra attack helicopter in 1967 and named it after the 114th platoon. 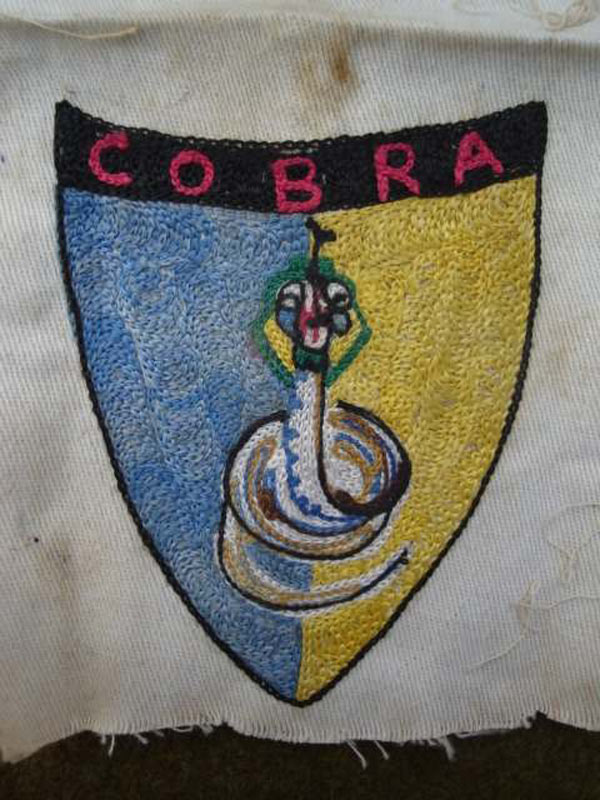 A Cobra Platoon patch from the 114th Assault Helicopter Company in Vietnam.

When Anthony Duarte first arrived at his base camp in Vietnam, he was assigned to a hooch with a medic who also happened to be a zoologist from San Diego State University.

“He would pick up every reptile he could put in cages or footlockers,” said Duarte. “The guy was scary. One day coming off of night security in a listening post, I came back to the hooch and this guy was frantic that one of his snakes got out. It was a cobra. Crap, I made sure that I moved to another hooch the next day.”

“We had a zoologist connected with our outfit in Phan Rang who collected reptiles to ship to the Dallas Zoo,” wrote Richard Belliveau of Flushing, Mich. “In the wooden crates he had a false bottom and shipped AK-47s with critters on top like cobras. The crates were clearly marked.

“To my knowledge, customs back in those days failed to open the boxes to check. He must have had a partner at the zoo. I remember he was saving up for a Corvette Stingray.”

Steven Pitkin said he encountered a lot of snakes while operating in the Mekong Delta. “Could feel one crawling over my legs in an ambush position but you couldn’t move. Was too tired to anyway.”

Rick Haug was on what was known as a bushmaster—not the snake, but a 45- to 60-day sweep in the Mekong Delta. The Americans were accompanied by two Hoi Chan (former enemy) when they encountered a large python.

“The next time that major went to the field, we were returning to base camp and encountered a daisy chain, made up with [Chinese communist] grenades. We disarmed the trip wire and instead of blowing it in place, our major decided he wanted to throw one of these grenades. We tried to talk him out of it, to no avail.

“We all backed off and when he popped the ring it went off. It miraculously didn’t kill him but he lost body parts. Bottom line, we never had to catch any more snakes!!!!”

The best story may have been from Mitch Louth of Saint Johns, Mich., who was on a “snoop & poop, with a couple cherries.” That’s a patrol with two newbies.