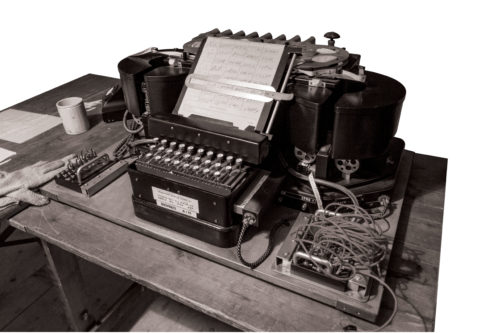 A Mark 22 Typex Machine was used to break codes at the now-famous Bletchley Park in England.
Alamy/2C3XD28

Ottawa had its own top-secret code-breaking establishment

In 1942, David Hayne, a recent University of Toronto graduate, was undergoing artillery training at Camp Niagara in Ontario when he received two mysterious letters that changed the course of his life and helped place Canada in the forefront of intelligence gathering.

The first was from a professor of French who asked Hayne if he would fill an opening at the National Research Council (NRC). There was no indication of what the work involved, only that it was connected with the war and that the letter writer found it absorbing. The young grad concluded that the job related to the French language, his passion. Still, he dispatched a cautious reply, saying he expected to begin his military career almost immediately.

That letter was followed a week later by one from a University of Toronto mathematician repeating the job offer at the NRC and adding, “The question of your military service can be taken care of. We should be glad to have you come to Ottawa as soon as you have finished your period in camp.”

This was enough to convince Hayne that he should take the offer. After his Canadian Officers’ Training Corps battalion returned to Toronto from Niagara, he boarded a train bound for the nation’s capital. It was June 26, 1942.

His ultimate destination in Ottawa was an agency ingloriously named the Examination Unit (XU). Opened in June 1941, it was a branch of the NRC and Canada’s answer to the Allies’ secret code-breaking facility, Bletchley Park, located in a mansion on a country estate in Milton Keynes, outside of London, England. 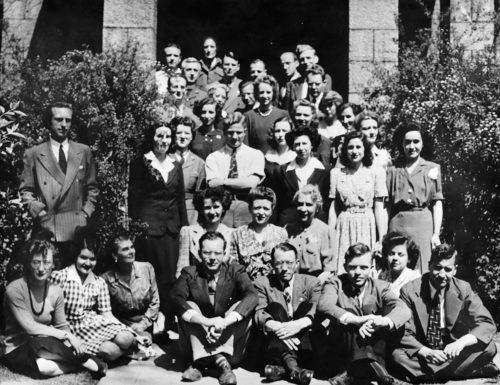 Staff of the Examination Unit pose outside the house where they worked in May 1945.
LAC/PA-178055

The XU was also housed in a mansion, although one not as grand as Bletchley Park. In the heart of Ottawa’s Sandy Hill, it was built in 1902-03 by John Edwards of the well-known Edwards lumber family and was situated next door to Prime Minister Mackenzie King’s Italianate residence, once Sir Wilfrid Laurier’s home, near the University of Ottawa. The mansion was the XU’s home until it closed at the end of the war. (The building has since been demolished and an apartment building is now on the site.)

In this hive of clandestine activity, Hayne worked as a codebreaker six days a week. He spent his first few months learning how concealment ciphers are encrypted into coded texts and attempting to complete broken or fragmentary Vichy French messages. At year’s end, he and two other civilian colleagues started working their way through a large book of graded code and cipher puzzles issued by Bletchley Park.

After toiling away on the puzzles for weeks, Hayne’s colleagues were sent to Bletchley Park. In June 1943, Hayne went to a small Canadian Army office at 283 Bank Street that analyzed the flow of Japanese wireless traffic.

Under Lieutenant-Colonel Edward Drake, the office expanded as the Joint Discrimination Unit and included air force and navy personnel. In September 1943, it moved into much larger quarters, the La Salle Academy building on Sussex Drive across from the Royal Canadian Mint. Combined with three wireless stations that intercepted enemy signals traffic, this unit constituted MI2 (Military Intelligence 2). Hayne was one of only four civilians assigned to it initially. The work Hayne and his colleagues were doing was new to Canada.

The house on Laurier Avenue East in Ottawa is where the National Research Council’s Examination Unit was working inconspicuously.
LAC/3325767

When the war erupted in September 1939, the Canadian government lacked any foreign intelligence capacity, having long depended on Great Britain to provide it with diplomatic and intelligence reports. Modern techniques for intelligence work, such as those developed since 1914, were virtually unknown in Canada.

“Cryptographic innocence was, in September 1939, perhaps more complete in Ottawa than in the capital of any other belligerent power,” wrote international security, intelligence and terrorism expert Wesley Wark.

All this began to change with the war. The rapid growth of Canadian power and political maturity fostered an evolution from cryptographic innocence to awareness. Canada entered into an intelligence alliance with the great powers, one that outlasted the war itself and was formally recognized by the secret United Kingdom-United States pact of 1947, known as the Five Eyes.

The first steps to becoming less dependent on Britain for diplomatic and intelligence reports were taken when then-Captain Drake, a Royal Canadian Corps of Signals officer, established a wireless intercept station at RCAF Station Ottawa at Rockcliffe.

Operating out of a basement office with the assistance of a Royal Canadian Mounted Police officer, Drake’s unit decoded messages between the Abwehr (German foreign intelligence) controllers in Hamburg and their agents in South America. The number of messages they decoded and forwarded to American and British intelligence authorities was impressive.

The operation inspired Drake to press military authorities in Ottawa to set up a more ambitious and larger cryptographic bureau. (After the war, Drake went on to establish the Communications Security Establishment. Its new Ottawa headquarters, opened in 2015, is named for him.)

The Canadian chiefs of staff rejected the idea, insisting Canada should continue to rely on Britain’s Bletchley Park for intelligence and that the cost could not be justified. But senior officials at the Department of External Affairs had also been considering an independent intelligence bureau.

Against the advice of the military chiefs and using unspent funds in the External Affairs budget (augmented by some unexpected money from private benefactors who had contributed to a military research fund), the civilian Examination Unit was established at the NRC in 1941. The new cryptographic bureau was presented to the Canadian government as a fait accompli.

The NRC hired two professors—Hayne’s correspondents from the University of Toronto—to launch the XU during the university’s summer break. They were not knowledgeable about code-breaking but these mathematicians belonged to a discipline noted for producing good code-breakers. Harold S.M. Coxeter and Gilbert de Beauregard Robinson arrived in Ottawa in April 1941 and set to work. 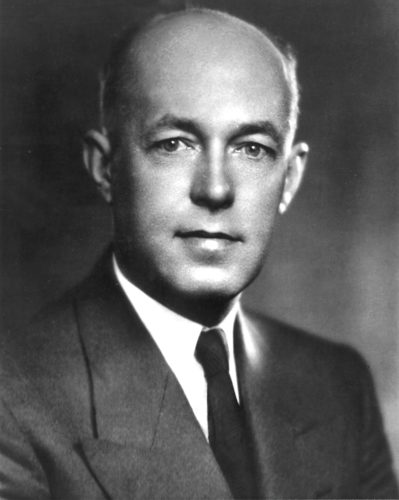 Herbert Yardley, an American cryptologist and codebreaker during the First World War, worked at the Examination Unit in 1941 under an assumed name.
Wikimedia

On an exploratory trip to Washington, where, fortuitously, they had a contact in the American Signal Intelligence Service, the two scholars met with leading figures in American cryptography, including General Joseph Mauborgne, commander of the U.S. Army Signal Corps. He said the U.S. could not spare resources to help equip or train officers, but he did suggest somebody to head it: Major Herbert O. Yardley, a code-breaking trailblazer in the First World War.

Yardley was controversial because he had published an inflammatory book, The American Black Chamber, about his activities during and following the First World War. It revealed intelligence secrets and disclosed that the Americans had been reading British diplomatic correspondence.

Despite the fury he had incited in the American and British intelligence communities, Yardley was hired under an assumed name to head the new bureau. Only months into his new career, the Canadian government fired him because his continued presence in Canada threatened to damage co-operation between this country and its two closest allies.

In March 1942, when the XU needed more space, its staff (which never numbered more than 50) moved to the mansion on Laurier Avenue. The XU’s original mandate to intercept the communications of Germany and Vichy France changed after Japan’s entry into the war. Japanese messages were intercepted and decoded but German messages were dropped from the mandate.

One party closely associated with the XU’s day-to-day operations was public servant Lester B. Pearson, then the assistant undersecretary of state for external affairs. Pearson was not only involved in its staffing. He also arranged for a plaque identifying the bureau as a “National Research Council Annex” to be installed outside it and asked that “two dispatch riders complete with their bicycles” be provided, reported Ottawa writer Diana Pepall. 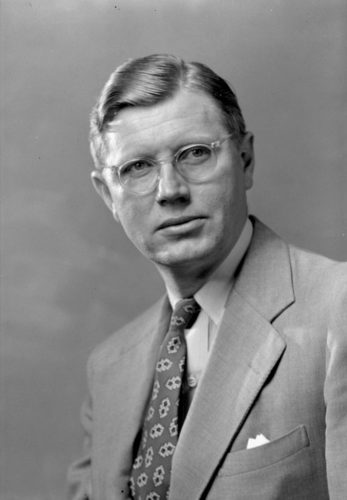 Herbert Norman was the head of a small intelligence unit that specialized in decoding Japanese communications.
LAC/PA-134317

When Hayne arrived on the scene in the spring of 1942, he found the security very tight. He had to show his identity card to the military guards at the door and shred and burn all his scrap paper in the evening. “We were even discouraged at first from joining outside organizations like the public library,” he wrote in his memoir.

One of Hayne’s colleagues at the time was Sylvia Gellman, a typist with a newly minted diploma from Willis College. She worked in the Japanese section on the mansion’s second floor.

“I typed decoded messages, sealed them in envelopes and then arranged for them to be delivered to the Department of External Affairs,” she recalled. “It was the most exciting part of my life.”

The head of the a small intelligence unit, Herbert Norman, worked on the third floor. Norman was born in Japan to Canadian missionary parents and was a widely acknowledged expert in Japanese history and culture.

The Canadian chiefs of staff rejected the idea outright.

Norman was among the first to do all-source intelligence assessments during the war. He later attracted controversy after the Americans accused him of being a communist. Canadian authorities concluded this allegation was groundless, but a distraught Norman committed suicide in Cairo, Egypt, in 1957 when the old charge resurfaced. In the 1940s, however, none of this suspicion hovered over him. Gellman remembers only a “very quiet man.”

When his work in the Joint Discrimination Unit was being phased out at the end of 1944, Hayne was sent back to the XU. He worked there in the Japanese diplomatic section for a few months until his contribution to the war effort ended when Japan surrendered in August 1945. Hayne was “released” to the University of Toronto.

The XU’s contribution to the war effort was significant. In three years, it helped Ottawa’s intelligence-gathering grow from practically nothing to the stature of London and Washington in two fields: French and Japanese.

The XU pulled more than its weight in these two areas while contributing to the common pool of intelligence and feeding a steady stream of knowledge to External Affairs.