The bombing of Dortmund 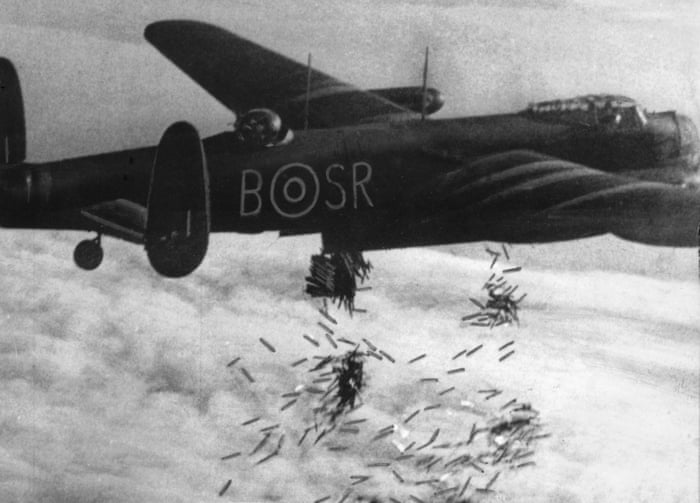 A Royal Air Force Lancaster releases bombs and incendiaries over Germany in 1944.
IWM/CL 1404
In the fall of 1944, a new Allied bombing directive called for heavy attacks on Germany’s industrial heartland, with oil, transportation and communication the chief targets, and the added benefit of eroding civilian morale.

The directive said the aim was virtual destruction of areas attacked, demonstrating the overwhelming superiority of Allied air forces.

Dortmund, the largest city in the Ruhr Valley, was in the sights of Bomber Command on Oct. 6-7, 1944. It was “the largest single enterprise ever attempted by Canada’s bomber force,” said Brereton Greenhous et al in The Crucible of War 1939-1945: The Official History of the Royal Canadian Air Force. Of 523 aircraft sent to bomb Dortmund, 300 were RCAF.

Dortmund boasted more than two dozen industrial works, including collieries and coking plants, chemical and explosives works, iron foundries and steel works, and 10 power stations. It was also a communications and transportation hub with a half dozen railway marshalling yards and an inland harbour connected by canal to the North Sea. 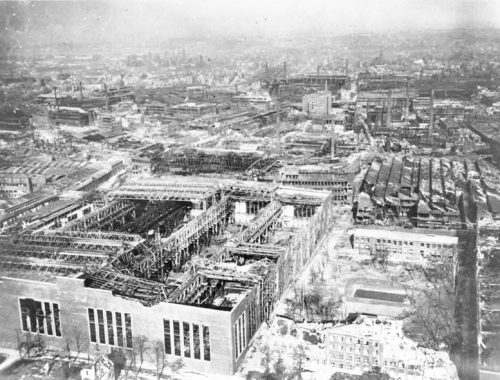 Taken from an artillery observation plane, this photo shows damage to the Krupp steel plant at Essen, Germany, which was pounded by Allied air attacks before the city fell April 10, 1945.
Wikimedia
The city of half a million was “a vital link in Germany’s war effort and, therefore, a valuable military target for Bomber Command,” said William S. Carter in Anglo-Canadian Wartime Relations, 1939-45: RAF Bomber Command and No. 6 (Canadian) Group.

The target was chosen the morning of Oct. 6. Air crews spent the afternoon in briefings: routes and altitude; what to target; where to expect enemy flak and fighters; avoiding a prisoner of war camp. The formation met heavy flak, but only nine fighter attacks.

In just 14 minutes around 8:30 p.m., hundreds of Allied bombers dropped their payloads on Dortmund.

Only five aircraft were lost, prompting reprimands to the Luftwaffe that there was no excuse for such a failure. Two of the crews were Canadian, victims of flak; one crew bailed out from their flaming aircraft, the second crash-landed with the loss of four crew members.

The raid was a success. Rail lines were cut; half the city lost gas, water and electrical service; it took weeks for the largest steel works to re-open.

Some 14,000 Bomber Command sorties dropped 61,000 tons of bombs during the third battle of the Ruhr; Dortmund was the target of 49 bombing missions.

The raids did impede enemy operations—between October 1944 and the following March, the Dortmund-Ems Canal carried only 12 per cent of the traffic compared to same period in the previous year. About 800,000 workers were engaged in repair work attributable to the bombing, and another 250,000 to 400,000 personnel were needed to provide the equipment and materials for the repairs. “A tremendous amount of available manpower was diverted from other essential employment to the reconstruction effort,” said David L. Bashow in None But the Brave: The Essential Contributions of RAF Bomber Command to Allied Victory During the Second World War.