Christmas at war: Sent to Korea by mistake 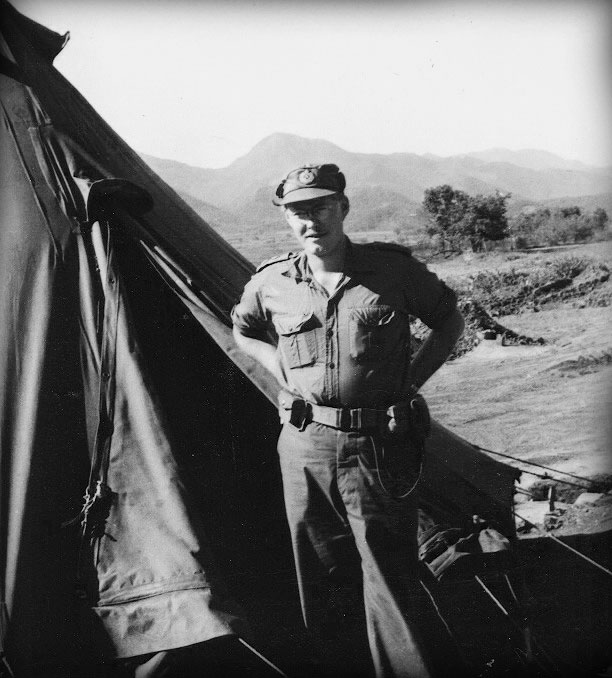 An army clerk fetched the wrong Lieutenant Johnson when he rounded up 25-year-old Vic Johnson from a classroom at the Royal Canadian School of Military Engineering in Chilliwack, B.C. Johnson was sent to Korea by mistake, an epic journey aboard trains, ships and a variety of vehicles that ended on Christmas Day 1951.
COURTESY JOHNSON FAMILY

James Victor (Vic) Johnson was a 25-year-old second lieutenant still in training at the Royal Canadian School of Military Engineering in Chilliwack, B.C., when he was mistakenly tagged to go off to war just before Christmas 1951.

The Eston, Sask., native had been in no rush to get to the front, but there were two Second Lieutenant Johnsons in training at the time and the other one, who had served several years and wanted a field assignment, had expressed his desire to go.

“When an assignment came up for a lieutenant to go to Korea, the general told the adjutant to send for Lieut. Johnson,” he recalls. “The adjutant sent the runner to get Lieut. Johnson out of his class, and he brought back the wrong lieutenant.

“While I was in Korea, I ran into the other Lieut. Johnson, who informed me of the error and was quite angry with me for having stolen his posting.”

An engineering graduate of the University of Saskatchewan, he boarded a U.S. troopship in Seattle, bound for Tokyo along with some 5,000 American soldiers, 180 Canadians and 300 U.S. Army spouses and children. The women were headed overseas to join their husbands headquartered in Tokyo.

“The shock came when we were told that we would be debarking at 8 p.m. to board a troop train to Kure,” Johnson wrote in a personal memoir. “We organized a shore party to recce the situation and return with some joy juice.

“The only thing available was some rather disgusting bourbon which most of us only sampled.” 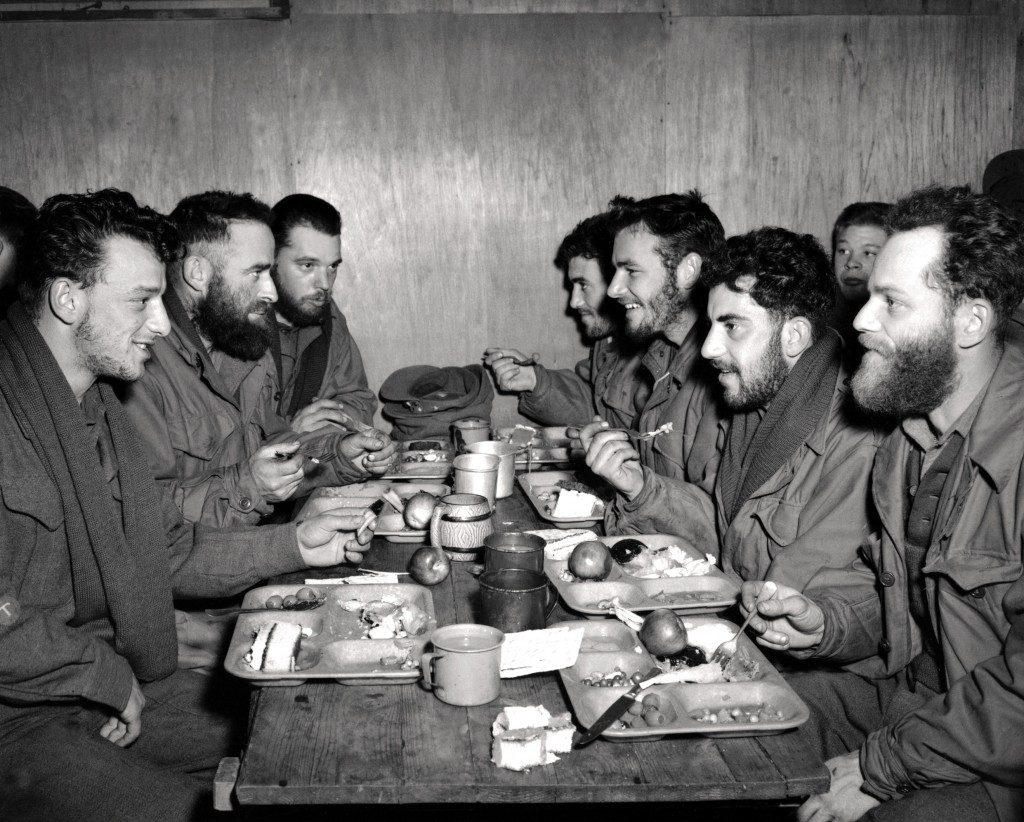 Members of the Royal 22nd Regiment sit down for Christmas dinner in Korea, 1953.
LIBRARY AND ARCHIVES CANADA—PA193932
They arrived the next morning at the Canadian base at Hiroshima, were issued billets and told simply to report to the adjutant daily. Johnson assumed he would be settling in for a Christmas in Japan. No such luck.

Reporting in for the first time the next morning, Johnson was handed his marching orders and, on Dec. 21, he arrived at the Kure railway station along with some 30 sappers and one staff sergeant with orders to proceed to Seoul.

Thus began another round of trains, ships and vehicles. At the U.S. naval base in Sasebo, Japan, they boarded a ship for Pusan, Korea, sleeping on straw mats on the deck and awakening to the first scent of the rice paddies they would come to know so well.

It was Christmas Eve. After a day exploring onshore, they boarded a troop train, where Johnson spent his trip sharing a bottle of Canadian Club with a railway transport officer—an American captain who was less than happy with his lot in life.

A Second World War veteran, he had been at University of California at Los Angeles and had joined the reserves to earn extra money. He was destined for a master’s degree in Chinese languages and could speak several dialects.

Naturally, he assumed the army would put his skills to use and, with several thousand Chinese prisoners being held less than 80 kilometres away, that wasn’t much of a stretch. Instead, he was running trains out of Pusan.

They arrived at the Seoul railway station at 6 a.m. on Christmas Day—such as it was. The place was empty. It had no roof, no windows, and the walls were riddled with holes.

He boarded a bus bound for the British supply base—a waypoint in his journey, it turned out. Johnson had a breakfast of fried bread and tea, his first sampling of British rations, but certainly not his last.

He lay down for what he hoped would be a short nap, only to be roused 10 minutes later and told to prepare for transport to brigade headquarters—a bumpy two-hour ride atop a load of freight in the back of a Bedford army truck. 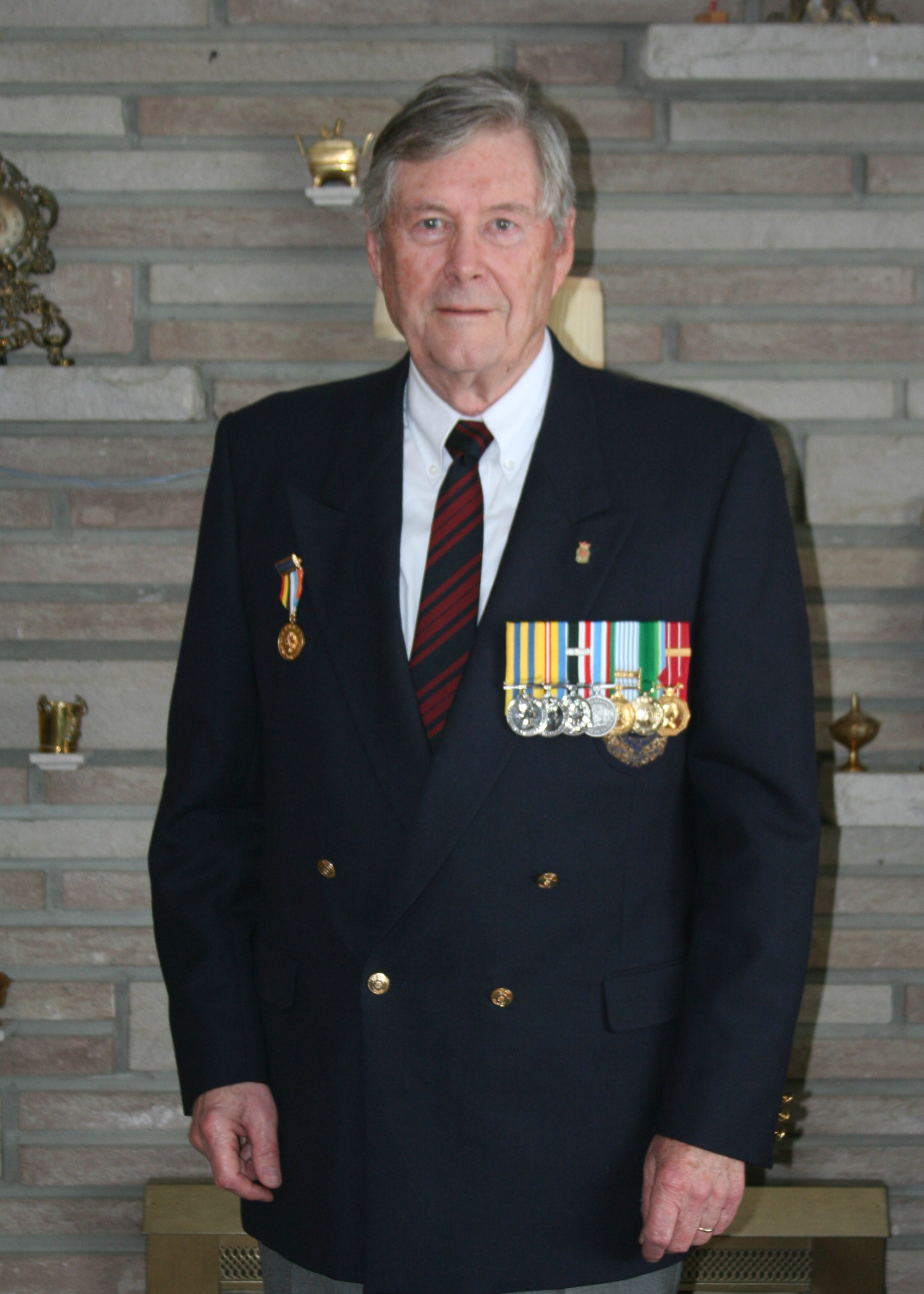 Johnson ended his military career a lieutenant-colonel, then worked as a civilian at the Defence Department until he retired.
COURTESY JOHNSON FAMILY
“At Brigade, I was welcomed at the officers’ mess and offered a drink for Christmas and invited, in keeping with army tradition, to help serve Christmas dinner to the other ranks,” he recalled.

“Standing behind the steam tables with fresh turkey and all the trimmings quickly reminded me that all I had to eat so far was a couple of slices of fried greasy bread and I looked forward to filling my plate in the officers’ mess in short order.”

Alas, it was not to be. Johnson was no sooner back at the officers’ mess when a Lieut. Cooke commandeered him for transport to his unit, 57 Field Squadron, RCE.

“We downed our drinks and climbed into a jeep for the 30-minute trip to the unit. There we were welcomed into the combined officers’ and senior NCOs’ mess and offered a drink prior to helping serve Christmas dinner to the men.

“Once more I stood behind a table laden with turkey and all the trimmings with an empty stomach.” 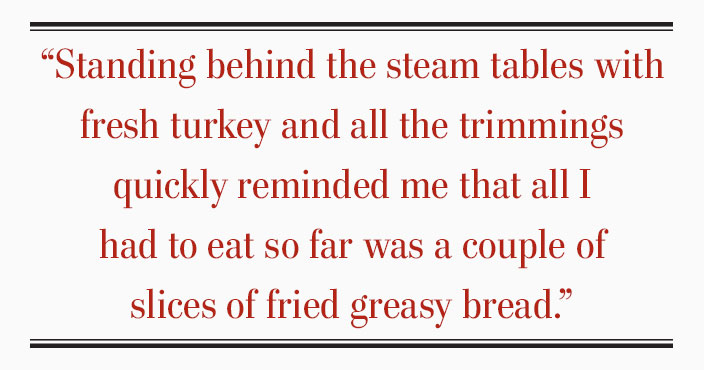 Johnson finally got his own Christmas dinner later that evening, then “turned in for a good night’s sleep after what had been an unforgettable introduction to life in the field.”

He left Korea just before the following Christmas. His squadron had returned to Canada in April 1952 and he had been reassigned to work with the British.

“As part of my duties, I was responsible for the heavy equipment, and had to order replacement parts as required. I made regular runs to Seoul. Before leaving to go back to Canada, I was provided with samples of goods that local merchants in Seoul had for sale, and brought the samples back to the front so that the men could place orders for Christmas gifts for their wives and families.

“I then brought the goods back with me…playing Santa before heading home.”

Johnson ended his military career a lieutenant-colonel, then worked as a civilian at the Defence Department until he retired.

PrevPrevious ArticleChristmas at war: A cabin in the Hurtgen Forest
Next ArticleDouglas Gordon (Part 1): Bail out or glide for EnglandNext