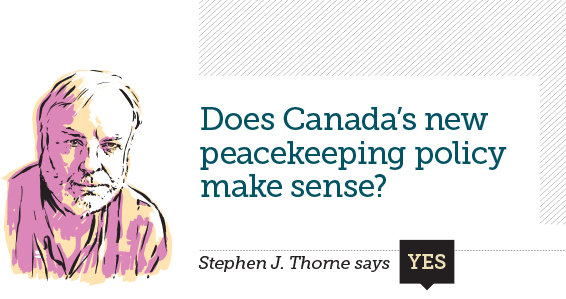 The thing about Canada and peacekeeping is that while 7 in 10 Canadians consider it one of the country’s signature characteristics, the reality has always been something quite different from the fantasy.

Sure, Canada helped revolutionize third-party roles in bringing conflicts to an end—decades ago. But those days are long past. Times have changed. The nature of warfare, and defence spending, have changed with them.

Peacekeeping as it used to be was a costly, thankless and sometimes ineffectual task. Canadian soldiers, who in 1991 comprised more than 10 per cent of United Nations troops, were cursed by the prevailing idea that peacekeeping was, well, a peaceful pursuit.

The perception of Canada as “good guy” was something of an albatross to a post-Korean War military that was increasingly undermanned and ill-equipped. For many Canadians, the label justified that lack of resources, as if large (read “adequate”) numbers of troops, vehicles, ships and aircraft weren’t necessary as long as we kept the peace. This was even as the threat of nuclear annihilation loomed.

For years, Canadians were unaware of peacekeeping’s realities—frustratingly restrictive rules of engagement; obliviousness to the challenges the troops were facing; a dearth of leadership and resolve among members and at the UN itself.

Canada’s experiences in Croatia, Somalia and Rwanda illustrate how such challenges soured our taste for peacekeeping. Canada’s UN contribution has withered to less than 0.1 per cent of the UN’s total troop deployment, according to multiple reports.

Military conflicts have entered a new age. Insurgencies and terrorist-style attacks (non-linear warfare) are the norm, NATO requirements are being redefined in Europe and elsewhere, and the defence capabilities of NATO members remain limited by fiscal and political constraints. The Afghanistan war was an invaluable experience for Canada’s military, proving we can still fight with the best and updating some inventory, albeit at the cost of 158 Canadian soldiers’ lives and a lot of individual pain.

If the federal government is to be believed, the Canadian Armed Forces are in for a transformation over the coming decades, the likes of which has not been seen since 1939-45. New ships. New planes. New vehicles. New health and human resources policies. The goal: to assert Canada’s place in a changing world and its sovereignty at home.

Ottawa is therefore right to set clear guidelines for military participation in UN missions. The country must respect its own priorities and work within its capabilities.

By consulting UN leadership and clarifying the organization’s needs, meting out resources as and where they will have optimum effect, Canada can best serve the UN, world peace and our own interests.

Present-day peacekeeping is far more exacting, complex and multifaceted than it once was. It demands more than mere military participation and, in many ways, the Canadian toolbox is ideally suited to it.

For Canada to apply those tools effectively and efficiently, the new peacekeeping policy appears to be a good start. 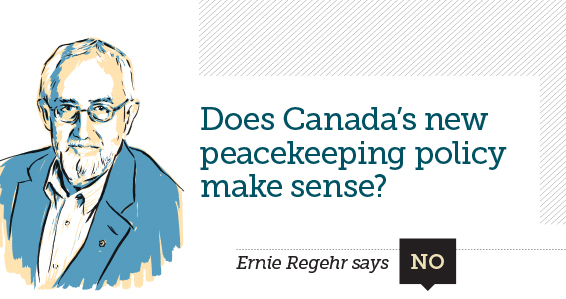 After Canada’s prolonged absence from peacekeeping, there has been more than a little audacity, basically in a good way, in the plan to re-engage. Because today’s conflicts are intractable, dangerous and complex, “new solutions” and “innovative approaches” are forthcoming, said Prime Minister Justin Trudeau.

But then come the details. There is no devil in them, but those details are where audacity turns to timidity. Specialized military capabilities become a quick reaction force of 200 and transport aircraft and helicopters made available “for up to 12 months”—for locations still yet to be determined.

Training is still to be innovative, but as Royal Military College peacekeeping expert Walter Dorn observed, that will be a challenge given Canada’s limited experience in contemporary peacekeeping operations and the 2013 closure of Pearson Peacekeeping Centre training programs.

There is a commendable focus on getting more women into peace-support operations, but for Beth Woroniuk, co-ordinator of the Canadian Women, Peace and Security Network, the point is not simply to increase the presence of women in “existing paradigms of military response.” It is to “emphasize diplomatic conflict resolution and peace-building approaches to ending armed conflict and building sustainable futures.”

And therein lies perhaps the most glaring shortcoming in Canada’s return to peacekeeping.

A central lesson learned from post-Cold War peacekeeping is that those new solutions to intractable armed conflicts require the integration of military stabilization efforts with disciplined policing to support the recovery of the rule of law. Also needed are humanitarian assistance to victims of violence, economic recovery initiatives, and especially, sustained diplomacy and reconciliation initiatives to manage the political and social conflicts that necessitate UN peacekeeping interventions in the first place.

Peacekeeping is necessarily multidimensional. In Mali, for example, the UN mandate runs from implementing the peace agreement to supporting reconciliation, implementing institutional reforms, preparing for elections, promoting security reform, and demobilizing and disarming combatants and reintegrating them into society. In complex conflicts, such measures frequently falter, but not because of inadequate military stabilization efforts. Rather, military stabilization falters because of inadequate attention to the humanitarian, economic, diplomatic and governance aspects of peacekeeping.

Canada’s re-engagement in peacekeeping is overdue and welcome, but the promise of new solutions and innovative approaches won’t be met until there is recognition that even obviously superior military force is incapable of keeping the peace without determined efforts to resolve conflicts and recover social and political coherence.

PrevPrevious ArticleShould Field Marshal Bernard Montgomery have tried to clear the Scheldt Estuary in September 1944?
Next ArticleWas the Dieppe Raid just a raid?Next