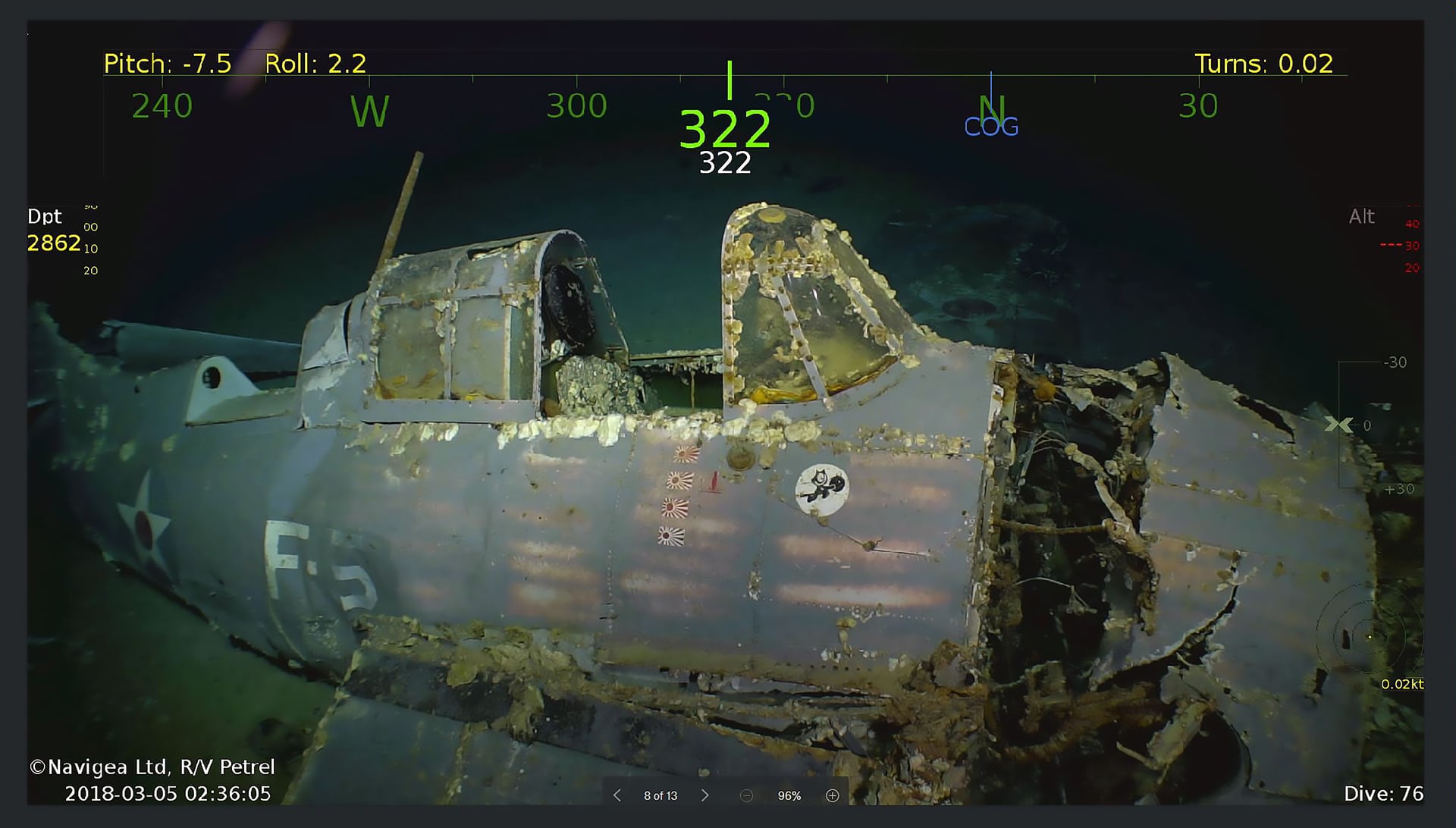 Wreckage of the Wildcat fighter F-5 from the USS Lexington, a Second World War aircraft carrier sunk on May 8, 1942. The wreck and her aircraft were discovered by a team led by Microsoft co-founder Paul Allen on March 4. The life-raft compartment behind F-5’s cockpit is missing its cover.
Paul Allen

In early March, the co-founder of Microsoft, Paul Allen, led an expedition 800 kilometres east of Australia, where he found the long-lost wreck of the USS Lexington, an aircraft carrier sunk during the Battle of the Coral Sea almost 76 years ago.

Among the stunning images to come back from that deep-sea exploration were several from a debris field on the ocean bottom three kilometres below the surface that included Devastator, Dauntless and this single Wildcat fighter aircraft.

From those dark depths, history came to light and to life. Forums all over the Internet zeroed in on this Wildcat from VF-3, one of the U.S. Navy’s most-decorated squadrons that included Medal of Honor recipient Edward (Butch) O’Hare and another of the most-renowned aces of the Pacific Theatre, John (Jimmie) Thach. 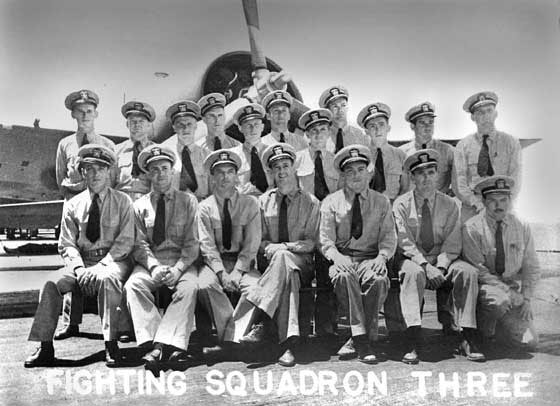 Fighting Squadron Three (VF-3), March 5, 1942. Standing, l to r: Mason, Clark, Sellstrom, Eder, Johnson, Lackey, Haynes, Stanley, Peterson, Dufilho, Lemmon. Sitting: Morgan, Vorse, Lovelace, Thach, Gayler, O’Hare, Rowell.
Fabio Peña/NavSource
This plane, F-5, is clearly marked with the squadron logo, Felix the Cat, based on a popular cartoon character of the silent-film era. It is credited with four kills, recorded as Japanese naval ensigns painted immediately below the cockpit. The pilot’s name, however, is partially obscured by barnacles, and amateur historians all over the web speculated that it could have been flown by this aviator or that.

It eventually became evident, however, that this is the story of two pilots—lieutenants Noel Gayler and Albert Vorse. 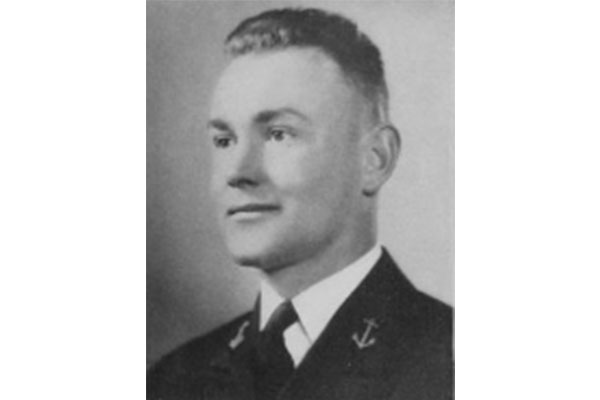 Lieutenant Albert (Scoop) Vorse.
US Naval Academy
Three letters on the fuselage just below the cockpit—“G A___R”—appear to confirm that the aircraft was Gayler’s, and the four kills match his total entering action at Coral Sea. It is likely the plane he flew off Bougainville Island, Papua New Guinea, on Feb. 20, 1942, when he shot down one enemy bomber and shared two other kills, one of them with his wingman, Ensign Dale. W. Peterson.

The sunken aircraft also has a bomb painted alongside its Japanese ensigns, indicating the fighter participated in a rare bombing run.

Hill Goodspeed, historian at the National Naval Aviation Museum in Pensacola, Florida, reports that there was only one instance of a bombing mission involving VF-3 prior to the Battle of the Coral Sea.

It came on March 10, 1942, against a Japanese airfield at Lae and Salamaua, New Guinea, where four Wildcat pilots dropped 30-pound fragmentation bombs: Gayler, Peterson, Vorse and Lieut. j.g. Robert Morgan. Gayler shot down a plane that day, too.

VF-3 was subsequently reassigned to the U.S. base at Pearl Harbor, Hawaii, and 19 of its aircraft, along with a dozen of its pilots, were temporarily transferred to another Lexington squadron, VF-2, just before the ship set sail for her final battle in April 1942.

Their aircraft were given new designations, but retained their Felix squadron logos and other details. Gayler’s F-1 was changed to F-5, and a close examination of the remarkably intact Wildcat discovered by Allen indicates the blue around the rudimentary number 5 is a slightly deeper shade than the rest of the plane’s.

For reasons known only to the U.S. Navy, however, Gayler was assigned another Wildcat, F-13. Vorse was given this one.

The book F4F Wildcat and F6F Hellcat Aces of VF-2 by Thomas McKelvey Cleave says Vorse was assigned to escort a flight of SBD Dauntless dive bombers on Lexington’s final day, but became separated and lost them in bad weather before reaching their targets.

“Having been forced to return to [his carrier force] prematurely, Vorse and his two wingmen intercepted a formation of Vals that had just attacked Lexington,” Cleave wrote. “The future ace made short work of two of the dive-bombers, and he subsequently received the Navy Cross for his efforts during this mission.”

“Lieutenant Noel Gayler was one of the fighter pilots escorting a flight of old Douglas TBD Devastator torpedo planes,” it said. “He and three other pilots from the Lexington tore into the screen of Zeros protecting the Japanese carriers.

“The American fliers were heavily outnumbered but their courageous attack allowed the slow torpedo planes to get through. Gayler destroyed two of the Zeros and the other Wildcat pilots got one each. But only Gayler survived the fight.

“On his way back to the Lexington, Gayler discovered two Kawanishi flying boats in his path. With the last of his ammunition, he shot them both down. Gayler was now the Navy’s top ace with eight victories.”

Gayler’s old wingman, Peterson, had received the Navy Cross for distinguished service in defending his carrier at Bougainville. He was killed the day the carrier sank when he was shot down while flying bomber escort against the opposing Japanese carrier force some 180 nautical miles from where Lexington went to the bottom. He was posthumously awarded the Distinguished Flying Cross. 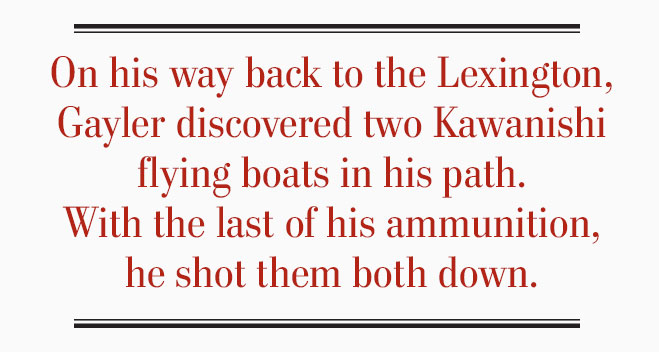 The U.S. Naval Institute website interviewed Gayler himself, who earned an unprecedented three Navy Crosses between February and May 1942 and ended his career as an admiral. His own reminiscences complete the timeline.

“It was at least two and a half or three hours from the time I landed until the time the captain gave the orders to abandon ship,” he said. “There were a lot of things going on, explosions in the ship. One main plane elevator went up in a column of fire and turned over and landed on the deck with a clang.

“There was a lot of concern about fighting fires. I was trying—fruitlessly, it turned out—to get another strike organized, because I knew there was at least one undamaged carrier in the Japanese force. At the time, we thought the planes would be able to launch, but we found out we couldn’t fuel, so that was the end of that.”

Shokaku was heavily damaged in the battle; Zuikaku could not be found and escaped unscathed. Neither was sunk until 1944, well after the Japanese fleet was devastated at Midway Atoll in June 1942.

Gayler described how crew took advantage of an incongruous opportunity after they were forced to Lexington’s stern in her final hours.

“The ship’s service ice cream plant was in the extreme port quarter, and some clown passed the word that there was free ice cream,” he recalled. “So while they were abandoning ship, sailors were lining up for free ice cream. Of course, they puked it up as soon as they had been swimming in salt water a little while. People don’t realize how young they were. God, they were only 18 or 19-20 at the most.” 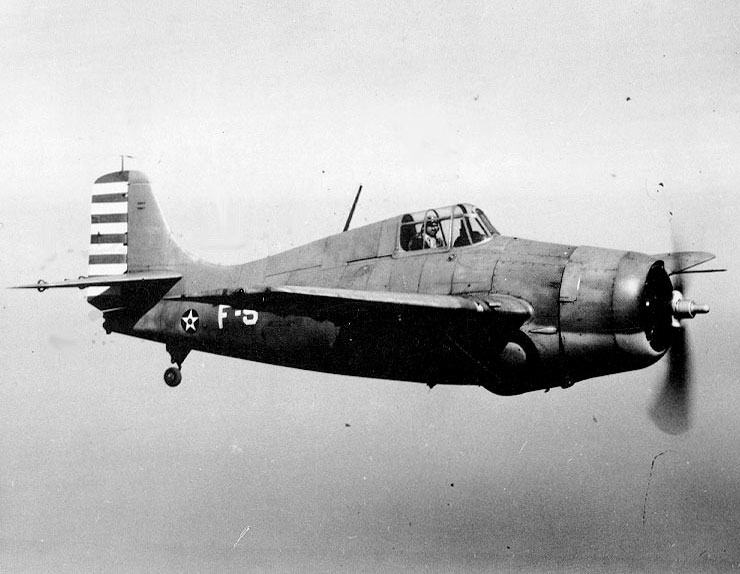 A Grumman F4F Wildcat from VF-3 Squadron, USS Lexington, bearing the same F-5 designation as the one photographed by Allen’s expedition.
WarThunder
F-5 and the other aircraft discovered by Allen’s team were likely on Lexington’s deck or below when her hulk was scuttled late on May 8, 1942. The American task force rescued 2,735 of her crew. Some 216 others were killed.

“There she goes,” one of her officers said as Lexington slipped beneath the waves. “She didn’t turn over. She’s going down with her head up.

After the battle, VF-3 was reconstituted and, without a ship to sail with, it was given temporary duty as a training squadron at Pearl Harbor. Many of its pilots were distributed among other squadrons.

There were 35 aircraft aboard Lexington when she went down. Allen found 11 of them during his initial sweep of the wreck site.

Peterson would have a destroyer escort named after him. After his naval career ended, Gayler, an Alabaman who had served with Senator John McCain’s father, would go on to head the National Security Agency under Richard Nixon. He died in 2011 at age 96.

The highly decorated Vorse ended the war with 21 aerial kills. He would eventually command his own squadron, VF-80—Vorse’s Vipers—and reach the rank of rear admiral before retiring in 1959. He died in 1979 at age 65.

Allen promised more stirring research on the Lexington wreck, which lies scattered in three pieces. Last summer, his team discovered the wreck of the USS Indianapolis, the heavy cruiser that delivered the Hiroshima atomic bomb to the U.S. base on the South Pacific island of Tinian.

After completing her top-secret task, Indianapolis was sunk by a Japanese torpedo and an undetermined number of her crew was infamously eaten by sharks.