Home » Military History » Face to Face » Face To Face: Should the Canadian government have authorized the forcible evacuation inland of Japanese Canadians during the Second World War?

Face To Face: Should the Canadian government have authorized the forcible evacuation inland of Japanese Canadians during the Second World War? 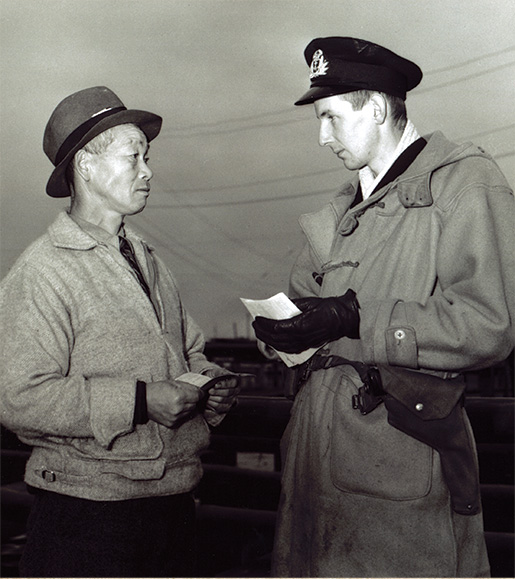 An officer with the Royal Canadian Naval Volunteer Reserve examines the papers of a Japanese-Canadian fisherman in Steveston, B.C., in December 1941.
DND/LAC/PA-170503

Granatstein has written dozens of books, including Who Killed Canadian History? and Canada’s Army: Waging War and Keeping the Peace. He is a former director and CEO of the Canadian War Museum. Sugiman is a professor and chair of the Department of Sociology at Ryerson University and former director of the national executive board of the National Association of Japanese Canadians.

No one today believes that the civil liberties of Canadians should ever be rudely violated. We bristle at the idea, and so we should. But Canada is (nominally) at peace in 2015; in 1942, however, we were at war, and the enemy was winning.

In Europe, the Germans were at the gates of Moscow and Leningrad, controlled all of Western Europe, and close to taking North Africa. Japan had attacked Pearl Harbor on December 7, 1941, destroying much of the United States Navy’s Pacific Fleet. The British Crown Colony of Hong Kong—including its 2,000 Canadian defenders—fell on Christmas Day, and British Malaya, the Philippines and the Dutch East Indies soon would follow. Many feared that Japan would invade Hawaii and strike at the West Coast of the United States and Canada. The fear in British Columbia was palpable, and the government in Ottawa, hitherto focused on defending Britain and the Atlantic, faced serious problems.

One such problem was our 23,000 Japanese Canadians. Fishermen, market gardeners, ordinary men and women living in peace—or a potential fifth column waiting to assist the invaders? Suspicion ran high in B.C., and almost all politicians, newspaper editors and military brass feared the worst. They had some reason. Japanese living in Hawaii, Hong Kong and Malaya were widely reported to have assisted Tokyo’s attacking military. Moreover, Tokyo regarded all overseas Japanese, regardless of where they were born, as Japanese citizens subject to the Emperor’s orders.

Canadian-born Japanese, the Nisei, were in an uncomfortable position. From well before the outbreak of war in the Pacific, Japan’s armies had been waging aggressive war in China. The English-language Nisei paper, The New Canadian, deliberately tried to counter “this vociferous anti-Japanese feeling” by publishing photo sections, presumably supplied by the Japanese consulate in Vancouver, praising Japan’s war effort. This was completely legitimate while Canada and Japan were at peace, but to many officials and B.C. residents, it looked very different after Pearl Harbor.

All this was an outrageous violation of the civil liberties of Canadians. But, to repeat, there was a war on.

In February 1941, American code breakers had intercepted orders, subsequently passed to the government in Ottawa, directing the Japanese consulate to recruit spies from Japanese nationals and Nisei and to use them to ferret out information on B.C.’s defences. But if hard intelligence was being collected and passed to Tokyo, no one knew, because the Canadian intelligence services were pathetically unprepared to find out.

In B.C., the military had only two officers who spoke Japanese and one who could barely read it. The Royal Canadian Mounted Police and provincial police had one Japanese linguist between them, and he was swamped. Without the ability to reach into the local community, without the capacity to secure hard information, concerns festered and suspicion grew.

In these circumstances, events followed a seemingly inevitable course. Days after Pearl Harbor, fishing boats, radios and weapons owned by people of Japanese origin were seized. On January 14, 1942, Ottawa ordered all male Japanese nationals aged 18 to 45 moved inland, and in February, faced with mounting public pressure, orders came to move all persons of Japanese origin—men, women and children, citizens and non-citizens alike—to makeshift town sites well inland. Several hundred Japanese nationals and Nisei who resisted the evacuation or were adamant supporters of Japan ended up in an internment camp in Northern Ontario. Ottawa then seized Japanese- Canadian property and sold it off at fire sale prices, compounding racism with what amounted to government-authorized theft.

All this was an outrageous violation of the civil liberties of Canadians. But, to repeat, there was a war on, and Canada and its allies were losing. A tightly knit group of Japanese Canadians, isolated from their fellow citizens by language and culture, aroused public fear, particularly in British Columbia, and the government believed it had to respond. The evacuation of Japanese Canadians inland was wrong, but in early 1942, it was necessary.

The federal government’s internment of Canadians of Japanese ancestry profoundly transformed the lives of many. For Japanese Canadians, it resulted in enduring losses, some irreparable: the loss of citizenship rights, privacy and dignity, opportunity, property and possessions, community and culture. So potent were the racist beliefs that guided the internment that more than 70 years later, we continue to debate its legitimacy.

For Japanese Canadians, people who had chosen Canada as a land in which to raise children, work and save, start small businesses—in short, carve out new lives—the internment was an assault on human dignity and a violation of the rights of citizenship. The second-generation Nisei, most of whom were born and grew up in urban and agricultural communities in British Columbia (for example, the Powell Street area of Vancouver; the fishing village of Steveston; the farming community in Haney) felt betrayed by a country they now called home, an acute awareness of their ‘foreignness,’ and a demoralizing lesson in the precariousness of citizenship. Their first-generation parents, the Issei, suffered significant material losses and uncertainty about the fate of their families.

For me, a third-generation Japanese-Canadian Sansei, the forced exile is not simply a historical blemish recorded in a textbook. Rather, it is a deeply personal issue, one that I have lived with all of my life: memories of uprooting, internment, resettlement and forced assimilation have been passed on from generation to generation. For my parents, grandparents, aunts and uncles, as well as 23,000 other Japanese Canadians, the internment, broadly defined, encompassed a range of violations, including confinement in former stables, separation of families, registration with Canadian government officials, curfews, incarceration in prisoner-of-war camps, relocation to ramshackle housing in the British Columbia interior and, ultimately, ‘repatriation’ of 4,000 individuals to Japan, a country that was foreign to most Canadian-born citizens of Japanese origin.

The forced exile is not simply a historical blemish recorded in a textbook. Rather, it is a deeply personal issue.

In 1988, Prime Minister Brian Mulroney signed the Japanese Canadian Redress Agreement. As part of this, the prime minister publicly acknowledged the wrongful way in which the government had treated Japanese Canadians during the war years, provided symbolic individual and community compensation packages, and committed to support collective national anti-racist initiatives in future years. From this, the Canadian Race Relations Foundation opened in 1997.

Longstanding myths that Japanese Canadians had posed a national security threat and that they were interned for their own protection from racist B.C. residents have long been dispelled. Comprehensive historical analyses, based on careful archival documentation and oral history interviews with non-Japanese Canadians who resided in the communities that witnessed the internment, uncover no proof of a security threat. Indeed, most Japanese Canadians made tireless efforts to prove they were loyal and hard-working citizens. Despite a long history of blatant anti-Asian prejudice and discrimination in B.C. and beyond, there were also white neighbours, classmates, co-workers, employers, missionaries and even RCMP guards who established longstanding friendships with Japanese Canadians in their midst.

The assumption of an individual’s national loyalties on the basis of presumed race rather than citizenship and culture, is fundamentally flawed. To maintain that a blatantly racist action is fair and just because it is legal (or sanctioned by the state) is equally problematic. To dispossess communities that have been “framed by race,” as the scholar and activist Roy Miki put it, has little to do with protection. When Canada’s Custodian of Enemy Property confiscated and resold fishing boats, farms, houses, sewing machines, dishes and family treasures, it had no bearing on ‘protection’ against racism.

Time has a way of healing wounds, of mixing memory and nostalgia, but I still maintain that Japanese Canadians should not have been interned. A democratic country must uphold the rights of its citizens. We cannot impute political sentiment and motive on the basis of race. We must learn from such historical injustices, deepen our understanding of racism in this country, and work toward transformative change.