Nowhere To Hide: Chaos In The Ypres Salient

Chaos and death ensued after the Germans released tons of chlorine gas in the Ypres Salient, April 1915. Gaps appeared in the front line and plans were made to plug them, but men were caught in the open and the list of casualties grew.

Shortly after midnight on April 22, 1915, Major Garnet Hughes made his way back to Mouse Trap Farm where Brigadier Richard Turner waited for news. Hughes, the son of Minister of Militia Sam Hughes, had gone forward to brief the two battalions ordered to attack Kitcheners Wood, in support of a promised French counterattack. 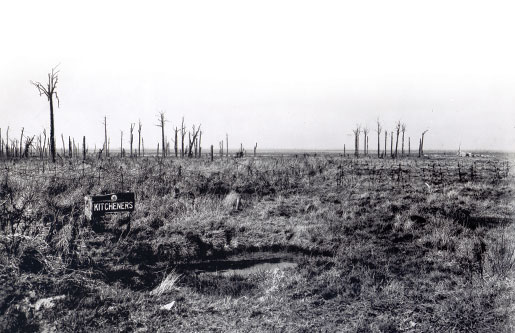 A sign marks the location of Kitcheners Wood, site of the April 1915 battle.
PHOTO: DEPARTMENT OF NATIONAL DEFENCE, LIBRARY AND ARCHIVES CANADA—PA004564

Hughes reported that the 10th and 16th battalions had reached the woods and the hastily organized operation appeared to be successful. There was, however, no sign of the French Army. Less than eight hours had passed since the Germans transformed warfare on the Western Front, releasing tons of chlorine gas and routing the forces that had been defending the northern half of the Ypres Salient.

The exposed flank, running north of the Ypres-Poelcappelle road, was defended by small groups of Canadian soldiers, but there was no continuous line. Lieutenant-General Edwin Alderson, the Canadian divisional commander, and the corps commander, Lt.-Gen. Herbert Plumer, were assembling reserves to help plug the gaps. Alderson informed Turner that two battalions from 1st Canadian Infantry Brigade were on their way to his headquarters. A composite British brigade soon to be known as Geddes Force would fill in between the Canadians and the French who had withdrawn west of the Yser Canal.

By the time Lieutenant-Colonel David Watson and his 2nd Bn. arrived, the news from Kitcheners Wood was much less optimistic and Turner sent the battalion forward to provide support and capture a German strongpoint that was harassing the Canadians with enfilade fire.

Watson, a Quebec City newspaper publisher and militia officer, was a friend and political crony of Sam Hughes. This relationship, which undoubtedly led to Watson’s appointment, has obscured the reality that Watson was a success as a battalion, brigade, and eventually commander of 4th Division in the last two years of the war. His military background was modest, but at age 45 he retained the fitness of an accomplished athlete and the self-confidence of a successful, self-made man. 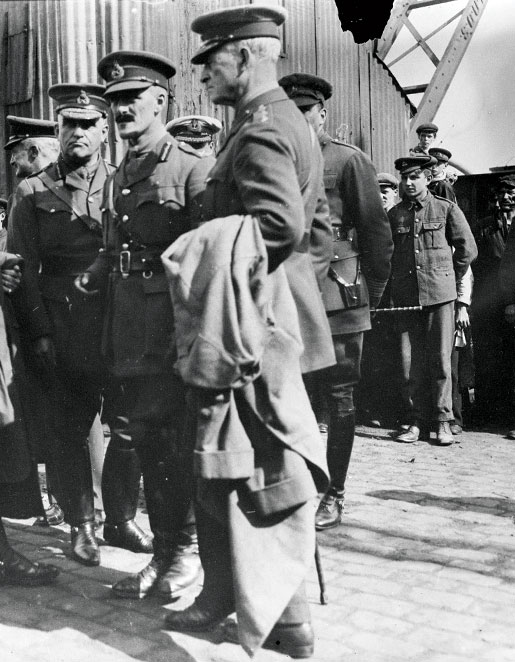 Minister of Militia Sir Sam Hughes (left), his son Garnet (centre) and Sir Sam’s brother St-Pierre, France, 1916.
photo: DEPARTMENT OF NATIONAL DEFENCE, LIBRARY AND ARCHIVES CANADA—PA000698
Watson needed all his leadership skills to transform the 2nd Bn. from a quarrelling group of volunteers, drawn from 17 Eastern Ontario militia regiments, plus detachments from the Mississauga Horse and Soo Rifles, into a disciplined battalion.

He decided to use one company to attack the strongpoint while the rest of the battalion established a blocking position to the west. A hastily organized attack without artillery support would only succeed under cover of darkness. However, the men were still moving forward as dawn broke, and they were caught in the open, breaking under the onslaught of enemy machine-gun fire.

The rest of the battalion secured Oblong Farm and dug in, but it was now evident that there was no one occupying the flank to their left. Geddes Force was still well back.

The 3rd Canadian Bn., drawn from the Queen’s Own Rifles and Royal Grenadiers of Toronto, was deployed along the eastern edge of Kitcheners Wood towards St. Julien, though they too found a gap on their flank. Lt.-Col. Robert Rennie, a 52-year-old-militia veteran and heir to the William Rennie Seed Company, worked easily with his fellow officers, but neither he nor they had any significant military experience. The lessons learned since arriving at the front ensured that everyone was well dug in, but the ground—flat, featureless, and overlooked by the enemy—could not be easily defended if the Germans attacked in strength. 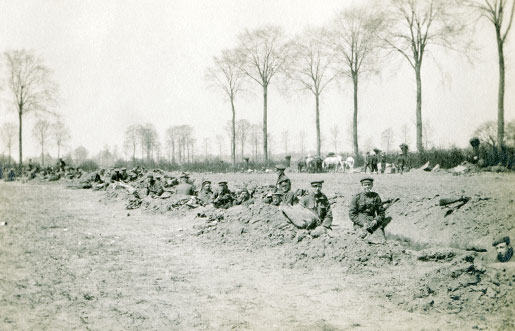 To the east, the situation was equally bleak. The 7th British Columbia Bn., from Arthur Currie’s 2nd Bde., had moved three companies to Keerselaere, closing the gap between the Black Watch and the St. Julien garrison, but the 7th—like the Black Watch and the 48th Highlanders—were occupying ground at the apex of the salient under fire from three sides. As one officer noted: “What trenches existed were just a pretence…the whole thing was just a graveyard.”

If all the responsible senior commanders had met together to consider the situation on the morning of April 23, they might have found a better way of preparing for the next enemy onslaught. No such meeting took place and a series of unco-ordinated decisions compounded the unfolding disaster.

Sir John French, the British commander, met with General Ferdinand Foch, who according to the British official history “assured him that it was his [Foch’s] intention to make good the original line and regain the trenches lost by the 45th Algerian and 87th French Territorial divisions. For this purpose he had ordered up large reinforcements. The British Commander-in-Chief agreed to co-operate in any counterattack, but stipulated that if the positions were not re-established within a limited time he should be free to withdraw his troops from their exposed and dangerous situation…”

The British commander, therefore, knew that while the French planned to mount a major operation, it could not take place for several days. He ordered the army commander, Gen. Horace Smith-Dorrien, “to assist the French and ensure that no further ground was lost,” but left the question of how to accomplish this to Smith-Dorrien. The army commander in turn failed to offer operational advice, allowing Plumer and Alderson to improvise plans that simply wasted precious lives. 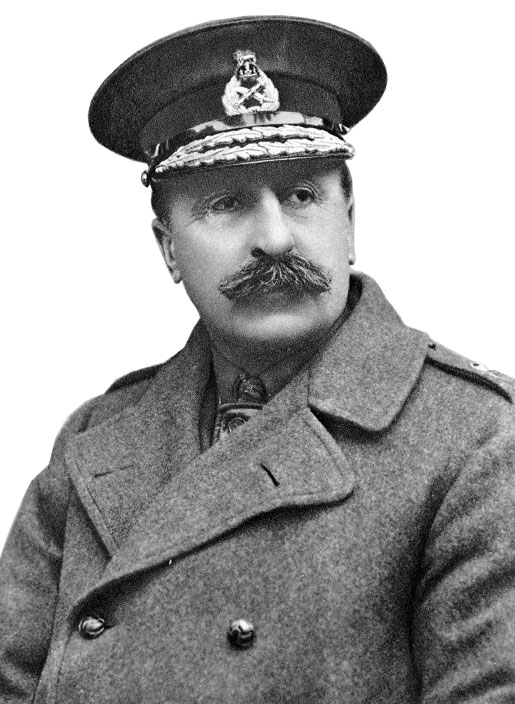 Plumer and Alderson had met briefly at a midnight conference when it was still possible to believe that the 45th Algerian Div. was capable of offensive action. They decided to order Brig. Malcolm Mercer’s remaining battalions, the 1st (Western Ontario) and 4th (Central Ontario), to support an attack by two Algerian battalions to regain Mauser Ridge.

After the fiasco at Kitcheners Wood, these orders ought to have been cancelled because by morning there was ample evidence that the Algerians were not ready to advance. To further complicate matters, Geddes Force, moving into the same area, was not informed about the planned attack or even the presence of the Canadians.

The 4th Bn. was commanded by a 38-year old British officer. The author of a widely-distributed pamphlet, The Rapid Training of a Company for War, Captain A.P. Birchall was an instructor in the Canadian Militia before his promotion to serve as commanding officer of 4th Bn. Birchall’s pamphlet emphasized the importance of artillery support and the necessity of fire and movement in properly supported rushes of 10 to 30 yards.

No such methods would be employed on the morning of April 23. The only artillery available, a single battery of the 1st Canadian Field Artillery, was on the far side of the canal. While Mauser Ridge was in range, the guns, with perhaps 200 rounds of shrapnel shells, firing at a target which could not be clearly identified, were of little consequence. An advance under cover of darkness seemed to be the only option.

Lt.-Col. F.W. Hill, commanding the 1st Bn., formed his unit up behind and to the right of Birchall’s men, waiting for 5 a.m., when the French advance was supposed to begin. The men lay in the open fields for more than an hour. They were 1,500 yards from their objective and there was little time left before sunrise would illuminate the battlefield. Birchall decided he couldn’t wait. The 4th Bn. fixed bayonets and moved out, covering the first 500 yards without incident.

As dawn broke they came under intense aimed fire and were pinned down in the fields. Birchall asked Hill to bring 1st Bn. forward and requested artillery support. It was now evident that there were no French troops in the area so divisional headquarters ordered Birchall to extend his line to the canal, more than a kilometre away. “We have reached a point 450 yards from the German trenches,” he replied. “All my companies are up in line and I cannot move them to the flank in daylight.”

Hill was equally unwilling to attempt such a dangerous manoeuvre, but he placed his reserve company to face the flank.

Fortunately, the enemy made no attempt to exploit the gap and by afternoon Geddes Force was in position under orders to seize Mauser Ridge. French battalions were also ready to join in but the attacks were not co-ordinated. The Canadians supported the British troops, overrunning the forward German line before suffering casualties and being forced to withdraw. Birchall was among the casualties, killed while leading his men.

The two Canadian battalions suffered 855 casualties, close to 50 per cent of their rifle strength. More than 600 of these were wounded and heroic efforts were required to evacuate them from the battlefield.

Both Canadian battalions established their Regimental Aid Posts (RAP) at a farmhouse east of the canal. The walking wounded and those on stretchers were brought to the RAP for first aid but the area was under German artillery fire. At 10 a.m., two medical officers from 1st Field Ambulance, with wagons and 100 men, braved the shellfire, crossing the canal on a pontoon bridge to set up a Collecting Post (CP) at the farmhouse. After basic triage the seriously wounded were stabilized, loaded on the horse-drawn wagons and taken across the canal to safety.

As the battle raged and hundreds of additional wounded men arrived, the farmhouse suffered direct hits, including tear gas shells. Captain E.L. Stone moved the CP to the west side of the canal, working his teams forward from this more secure position. Colonel J.G. Adami, whose book, The War Story of the C.A.M.C. (Canadian Army Medical Corps) 1914-1915, offers a narrative of the medical corps at Second Ypres, described Stone’s efforts. “By dusk the wounded ceased to come in and now he heard of a large farm half a mile beyond…he found it full of wounded, with no medical officer… Capt. Stone made this farm his next Collecting Post.” He and his men “were too busy to do any dressings. There was no time to take notes and make records. They were fully occupied in looking after the creature comforts of the wounded, tagging them and sending them on.”

At the apex of the salient, the enemy, surprised and frustrated by the continued defence of the area, was targeting the shallow trenches, waiting for the wind to shift so that gas could again be used.