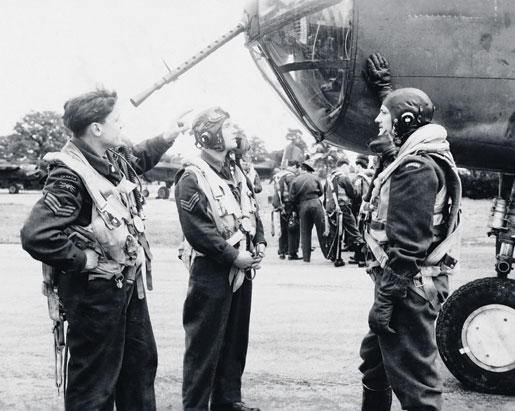 During the Second World War, Royal Canadian Air Force squadrons flew many types of aircraft in a variety of roles. Looking over this history, it is worth noting that no Canadian squadron operated in the medium-bomber role closely identified with tactical bombing. The greater part of RCAF personnel operating overseas in Mitchell medium bombers did so as members of Royal Air Force squadrons.

First flown in August 1940, the North American B-25 Mitchell was made famous by the United States Army Air Force Doolittle Raid on Japan in April 1942. Even today this type of aircraft lives on as a star in the 1970 satirical war film Catch-22. The B-25 had a maximum speed of 290 miles per hour and carried some 4,000 pounds of bombs. Almost 11,000 of the type were built. Of these, 910 were diverted to the RAF under the Lend-Lease program. Many of these aircraft never crossed the Atlantic, being retained at No. 111 Operational Training Unit (OTU) in Nassau or diverted to No. 5 OTU at Boundary Bay, B.C. In both schools, the type was used to introduce pilots to a tricycle undercarriage before graduating to heavier Liberator bombers. 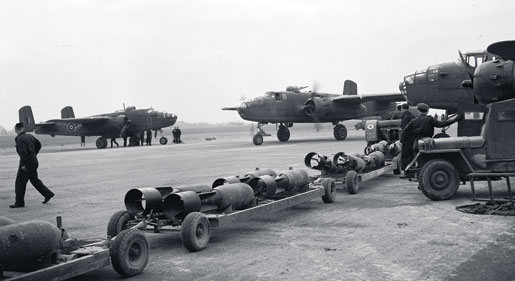 Among these was Pilot Officer Forbes Robertson of Saskatoon. He went overseas as a wireless air gunner in October 1941, and had further training in Britain and Egypt before being attached to the 12th United States Medium Bombardment Group in December 1942. Robertson flew at least 22 missions with that formation and was awarded the American Air Medal before losing his life on April 29, 1943. He was aboard a bomber returning from a sortie which still had a live bomb on board. Upon landing, the weapon fell off and exploded.

Flying Officer Leonard Kelly of Ottawa was another wireless air gunner attached to the same group. He had joined it early in 1943, and was reported missing with an American Mitchell crew on Aug. 5, 1943. The aircraft, which had been detailed to bomb Adrano, south of Mount Etna in Sicily, was shot down by anti-aircraft fire.

The largest number of RCAF aircrew to fly in Mitchells served in RAF medium bombers in Britain. Four squadrons—Nos. 98, 180, 226 and 320—operated in the Second Tactical Air Force as No. 139 Wing. Before D-Day in June 1944 they attacked flying bomb sites, rail yards and supply depots in France and Belgium; after D-Day their target lists were extended to road junctions and bridges. Operating at 10,000 feet and below, their principal enemy was flak which took down bombers almost randomly. The Luftwaffe spent little time on countering well-escorted Mitchells. Two exceptions were on Sept. 21, 1943, and Sept. 25, 1944. On each occasion, FW.190s shot down two Mitchells of No. 98 Sqdn. Warrant Officer Harry Bowmaster, a wireless air gunner from Calgary, survived the latter action as a prisoner of war.

From December 1943 to November 1944, No. 139 Wing was commanded by Group Captain Clarence R. Dunlap, RCAF. His appointment was questioned by some RAF officers who felt that as the RCAF had no medium-bomber squadrons, it was inappropriate for such a formation to be headed by a Canadian. Such talk raised the hackles of Air Marshal Harold Edwards who was fiercely nationalistic. Dunlap had recently commanded No. 331 Wing in North Africa; that should be enough. As it was, Air Marshal Sir Basil Embry, commanding No. 2 Group, which included No. 139 Wing, agreed with the appointment. Dunlap eventually completed 35 sorties with the Mitchell wing. 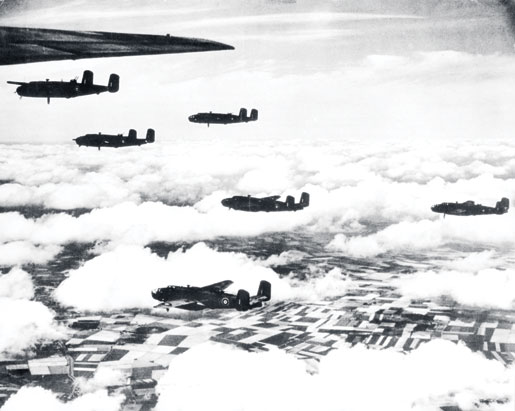 The road to a Mitchell squadron usually led through No. 13 OTU at Bicester, England. Many of the RCAF personnel passing through had already met while attending No. 34 OTU at Pennfield Ridge, N.B. Pilots at No. 13 OTU normally received about three hours of dual instruction on Mitchells, followed by 27 hours flying in sole control; about a third of this consisted of formation flying. Navigators logged about the same hours or a bit more. Many also took courses in airfield defence, learning how to use rifles and Sten guns in the event of having to defend a continental airfield; No. 139 Wing was based in Belgium from November 1944 onwards.

Trainees also learned field craft, in case they were shot down behind enemy lines. A common event was an evasion exercise whereby dozens of aircrew were taken to remote areas, dropped off, and told to “evade capture” while being hunted by British Home Guard and police.

It is difficult to say how many Canadians served in Mitchells; a conservative estimate would put it at 250. In Britain and Europe, at least 51 members of the RCAF were killed while flying in this type. Two died while attending No. 13 OTU; three died in 1943 in accidents with No. 21 Sqdn.; 13 were killed with No. 98 Sqdn.—one in a flying accident, the others on operations; 14 with No. 180 Sqdn., six of which were classified as accidents, and 18 with No. 226 Sqdn., all of which were operational.

Mitchells flew both daylight and night missions. Flying Officer Robert Fowler, writing in the Journal of the Canadian Aviation Historical Society in 1994, recalled night sorties as being a relief from daylight operations. “It was nice not to fly a full trip in formation and we tended to feel that nobody knew we were there. Sometimes we got fairly close to the ground at night.  After the war I visited a number of places in Europe, and was appalled at some of the hills and high-tension wires on our former routes—all of which were there during the war.”

Although respected as an airplane, crews disliked the wing spar which hindered contact between the pilot and bomb aimer and the gunners in the rear. Flight Sergeant Fred Coté of Ottawa earned a wireless air gunner badge in December 1942. He completed a tour with No. 21 Sqdn., served at an OTU, and then was posted for a second tour to No. 226 Sqdn. On an early Mitchell sortie his aircraft was hit in one engine and crash-landed in Belgium, fortunately without injury. However, on Nov. 19, 1944, while approaching the Venlo bridge at 15,000 feet, his aircraft took a direct hit which killed his three comrades and cut the fuselage in two. The after portion, with turret and Coté, plunged several thousand feet before it ceased spinning and settled into a prolonged flutter, rather like a leaf. The tail landed in an orchard and he staggered out, wounded, but alive. He ended up a prisoner of war.

“It was nice not to fly a full trip in formation and we tended to feel that nobody knew we were there. Sometimes we got fairly close to the ground at night. After the war I visited a number of places in Europe, and was appalled at some of the hills and high-tension wires on our former routes—all of which were there during the war.”

On Sept. 8, 1944, they set out with others to bomb German positions near Boulogne, France. Their load consisted of eight, 500-pound bombs. Flak was accurate and heavy. Returning from the raid, their aircraft dropped out of formation for a few minutes, during which the bomb doors were opened and closed. At length it rejoined the others and made what appeared to be a normal approach to Dunsfold. As it touched down, one—possibly two—bombs which had “hung up” shook loose and exploded, killing all four crewmen and an RAF tradesman on the ground. This was the second such loss in a month, and the tragedy became the subject of an intense investigation centering on the reliability of bomb shackles, release gear, and disarming procedures. Loveridge and Logie had clearly been aware of the “hang-up” while en route home, but evidently believed that the bombs were secure or had been rendered harmless. They were wrong.

Another all-RCAF crew was that of PO Leonard W. Pattyson, Sgt. John P Werbowecki, Sgt. Richard M. Cole, and FO Gordon A. Green. They joined No. 226 Sqdn. on June 5, 1944. On July 24, while preparing to bomb enemy troops near Caen, their aircraft was hit by flak and set on fire. Pattyson flew out over the Channel to jettison his bombs, then ordered his crew, which included an RAF photographer-passenger, to bail out. Werbowecki spent two hours in the water before being picked up. Although he had seen at least three other parachutes, and all the men had life jackets, his comrades were never seen again. 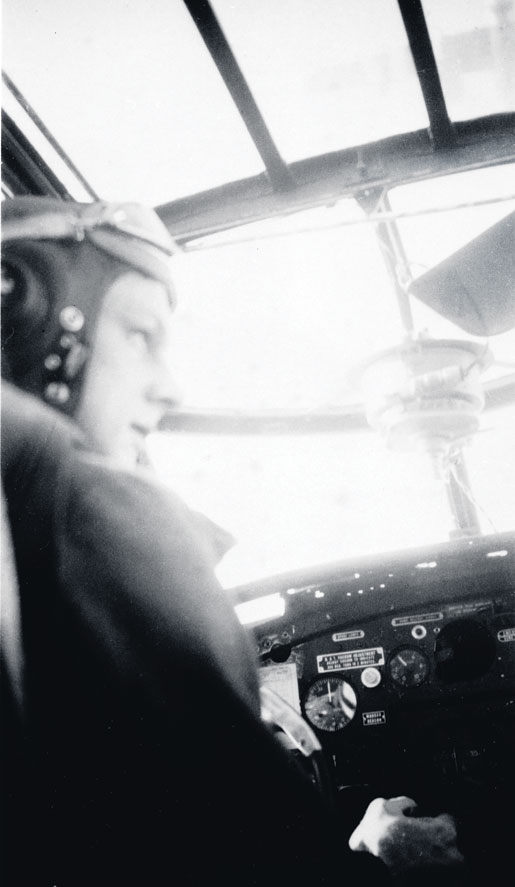 Flying Officer Robert Fowler in the cockpit of his Mitchell bomber of No. 226 Squadron, RAF, 1944.
PHOTO: LIBRARY AND ARCHIVES CANADA—PA123031

If there were tragedies, there were also successes, as indicated by awards to several RCAF Mitchell aircrew. Flying Officer Thomas S.W. Harvey was such a case, being awarded a Distinguished Flying Cross in January 1945 for services in No. 226 Sqdn. His adventures included an August 1944 crash-landing after flak damage, and leadership in bombing a bridge at Venlo, Holland, in November 1944.

Another decorated Mitchell pilot was FO John W.D. Pudney of No. 98 Sqdn. He was singled out for another attack on the Venlo bridge in December 1944. With one engine disabled by flak, he completed his attack and landed safely at base. The citation to his DFC declared, “He has always set a magnificent example of courage, ability and outstanding determination.”

No. 139 Wing crews were respected for their accuracy. By 1945 they were permitted to bomb within 500 yards of the front lines, a thousand yards if aiming with radio aids. Mitchell tactical bombers tended not to catch the public imagination which was accorded to rocket-firing Typhoon fighters or hill-hugging strafing Spitfires. The war against bridges and marshaling yards was nevertheless vital to infantry operations, minimizing enemy mobility and opposition.  Canadian airmen engaged in such work perhaps deserved a few more press releases.

PrevPrevious ArticleThe Men Who Sank The Tirpitz: Air Force, Part 54
Next ArticleIcy Latitudes: The Duty Of The Lost LegionNext