“Adventure and serving your country, what a drawing card, eh?” said my wife as she examined the photo of the 17-year-old sailor and put it on the scanner. “Wow!”

It’s a remarkable Second World War story. From only 13 ships when war broke out in September 1939, the Royal Canadian Navy mushroomed to 332 warships, becoming the third largest Allied navy in the war. Morley Barnes of Georgetown, Ont., was typical of the young men and boys who volunteered, swelling the number of full-time sailors from 1,800 to 100,000. Most went to sea and the majority had time in a corvette.

Designed along the lines of a whale catcher for coastal duty with the Royal Navy, the corvette was chosen by the RCN because it was simple and could be built cheaply by Canadian shipyards with no experience in naval construction. Soon however, our early corvettes were pressed into service as mid-ocean escorts in the vital role of keeping open the Atlantic lifeline by protecting the convoys of merchant vessels that transported vital war supplies and food to the United Kingdom. This was at a time when Germany occupied Western Europe and was using submarines in groups called wolf packs in an attempt to strangle the U.K. into submission.

Canada put 123 corvettes to sea in the Second World War, 111 of the original Flower class designed in the United Kingdom and 12 of the larger Castle class. Canadian shipyards on the Great Lakes, the St. Lawrence River, the East Coast and the West Coast combined to construct 107, all flowers. Design improvements and technological advances were incorporated in stages. The early Canadian models cost about $600,000 on the West Coast and $530,000 elsewhere. The remaining 16 corvettes were built in the U.K.

In many ways, the corvette was Canada’s signature ship—greatest in number, total crew and community connection, with 113 named after villages, towns and cities in all nine provinces from British Columbia to Prince Edward Island. The other 10, built for the RN and re-commissioned RCN, kept their original flower names.

Naturally, the North Atlantic was the main theatre of Canadian naval activity and the Newfie-Derry Run between St. John’s, Nfld., and Londonderry, Northern Ireland, was the primary convoy route. Merchant ship losses were heavy on the North Atlantic, particularly early in the war when the navy sailors were green and poorly trained, and escorts were thrown together in groups with inadequate training in tactics and teamwork. Corvettes also served in many other theatres, including the English Channel, Gulf of St. Lawrence, Mediterranean, Caribbean and the West Coast. 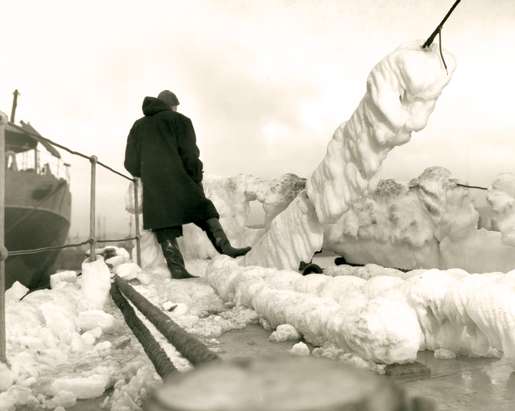 Corvettes were convoy protectors, but also U-boat hunters when the opportunity arose. In fact, 20 corvettes earned solo or shared credit in 17 of the RCN’s 33 U-boat kills. On the downside, 10 of the 24 Canadian warships sunk were corvettes, seven lost by torpedoing, and one each by aircraft, collision and mine. By theatre, Canada’s corvettes losses were: Atlantic, 3—Levis, Windflower, Spikenard; English Channel, 3—Regina, Alberni, Trentonian; Gulf of St. Lawrence, 2—Charlottetown, Shawinigan; and Mediterranean, 2—Louisburg and Weyburn.

The soul of a ship is her crew and the corvette experience left sailors with vivid memories. “The ratings in the crews were mostly young reservists, with only a few key positions filled by regular or recalled personnel,” said Arnold Trask of Digby, N.S., who served in the corvettes Prescott and Brantford. “Service aboard was monotonous and debilitating for long periods, either because of the need for constant vigilance in the face of the twin dangers of the sea and the enemy, or because of the cold in the North Atlantic. When action came, it could be prolonged and brutal with the sight and aftermath of the sinking of freighters or other warships.”

Burnie Forbes of Smiths Falls, Ont., enlisted at 18. His first real experience with corvettes came in December 1941 while serving in the destroyer Saguenay westbound from Iceland. “It was one of the wildest seas I ever experienced, enough to disperse the convoy. The lower decks had two feet of water slushing around our feet. We in the destroyer were concerned our little corvettes would never make port. To our amazement, when we arrived in St. John’s harbour, all the corvettes were neatly tied up alongside the jetty, and had been berthed there for three days.”

In winter, “much time was spent chipping ice and sweeping it over the side,” recalled Kincardine stoker Barnes. “This was a must. There was always the danger of becoming top heavy. The corvette bounced around like a cork. The waves were so high you couldn’t see the top when you were in the trough. The corvette would climb that wave, then, passing the top, the stem of the ship would come crashing down on the other side. This would send shivers through the whole ship. You could feel it through your boots. Destroyer travel basically is a straight line. They go through the wave, not ride it.”

“There was nothing like the roll and pitch in a heavy sea to give you the sensation of weightlessness—lifting you up and then dropping out, leaving you floating,” said Doug May, a telegraphist in Kincardine and now a 64-year member of Chilliwack, B.C., Branch.

Stoker William Anderson of Niagara Falls, Ont., who served in Collingwood and Orangeville, summed up his experience. “Corvettes were the best sea ships anywhere. It was said they would roll on wet grass, but they would sail in any weather!”

Trask noted the short length and shallow draft made corvettes uncomfortable to live in even after they were modified. “A fortnight of rolling and pitching on North Atlantic convoy duty tended to exhaust all who sailed in them. Sleeping conditions for seamen were crowded, stuffy and quite often water-laden. The seamen’s messdeck was also full of smoke as most everyone in the mess was a smoker, so the only fresh air we got was when we were on watch in the open air.”

“There was discomfort in using the heads (toilets) at sea,” recalled Forbes. “While the ship rolled, one was likely to be flushed by a backlash of water which the toilet traps could not stop. Perhaps this is where my corvette Wetaskiwin got her nickname—the Wet Ass Queen.”

Barnes is direct: “On a corvette three days at sea, anything that was breakable was broken. Riding in a corvette, working, recreation time, sleeping, etc., was extremely rough, noisy and dirty. The smell of the ship, and the men themselves, was absolutely gross. No laundry facility or showers. Fresh water was very limited. Hammocks were lashed (tied up) and stored during the day. Then at night hammocks were opened and I swear you could see blue haze rise from them. Stokers slept in their clothes, they merely removed their boots.”

Agreement came from Ernie Pain, 87, of Cornwall, Ont., who served in Louisburg: “Living on a corvette is not like a cruise ship. Hammocks are slung all over the seamen’s messdeck. Blankets are hanging out. Feet and legs hanging over the messdeck table you eat off. Washing at sea was next to impossible as we made salt water into drinkable water, which was turned on back in the heads for a half-hour a day. Amazing that we never had too much sickness other than crabs and scabies, common in the navy.”

Hammocks were, in fact, popular. “Sleeping in a mick is the only way to go on a small ship,” explained Art Chinery who served in Orangeville. “Like being in a cocoon.”

Food could be a challenge. Howard Trusdale of St. Thomas, Ont., said: “The cooks had a tough job working in close quarters on a less than stable platform with pots and pans that wouldn’t always stay in one place and crew who couldn’t all be pleased at the same time.”

“I didn’t think our food was a problem, except when a pretty good stew was ruined with too much curry. Maybe the cook was trying to cover up something,” observed May, who enlisted at age 18. “Bread was something else, especially the Irish bread. It was heavy and very moist. Two days out and it was really mouldy. However, some extra jam covered the mould spots and down it went. I understand that penicillin was derived from mould, so maybe that is why I’m as healthy as I am today!”

Vic Martin of Sarnia, Ont., a Regina leading seaman, is concise: “The cooks did a good job, especially considering the conditions they had to work with.”

The English Channel was a very active area for the RCN from the spring of ’44 to war’s end. Among other warships, 19 corvettes were in theatre escorting convoys along the English coast and across to France. Three were sunk, all by U-boats.

One, Alberni, made a score of her own. “The afternoon of July 26,” recalled Leo McVarish, “we heard an alert. ‘Two Junkers 88 in your area laying mines.’ We were at action stations immediately. As I prepared the magazine for the four-inch gun, bullets from our anti-aircraft guns were racing over our heads and there were many hits by the troop. Flames erupted from our…fire. The plane banked and fell into the ocean…. Naturally, a big roar went up, but then you figure we just killed maybe four men. It was them or us.”