Who won the war in Europe? Historians weigh in 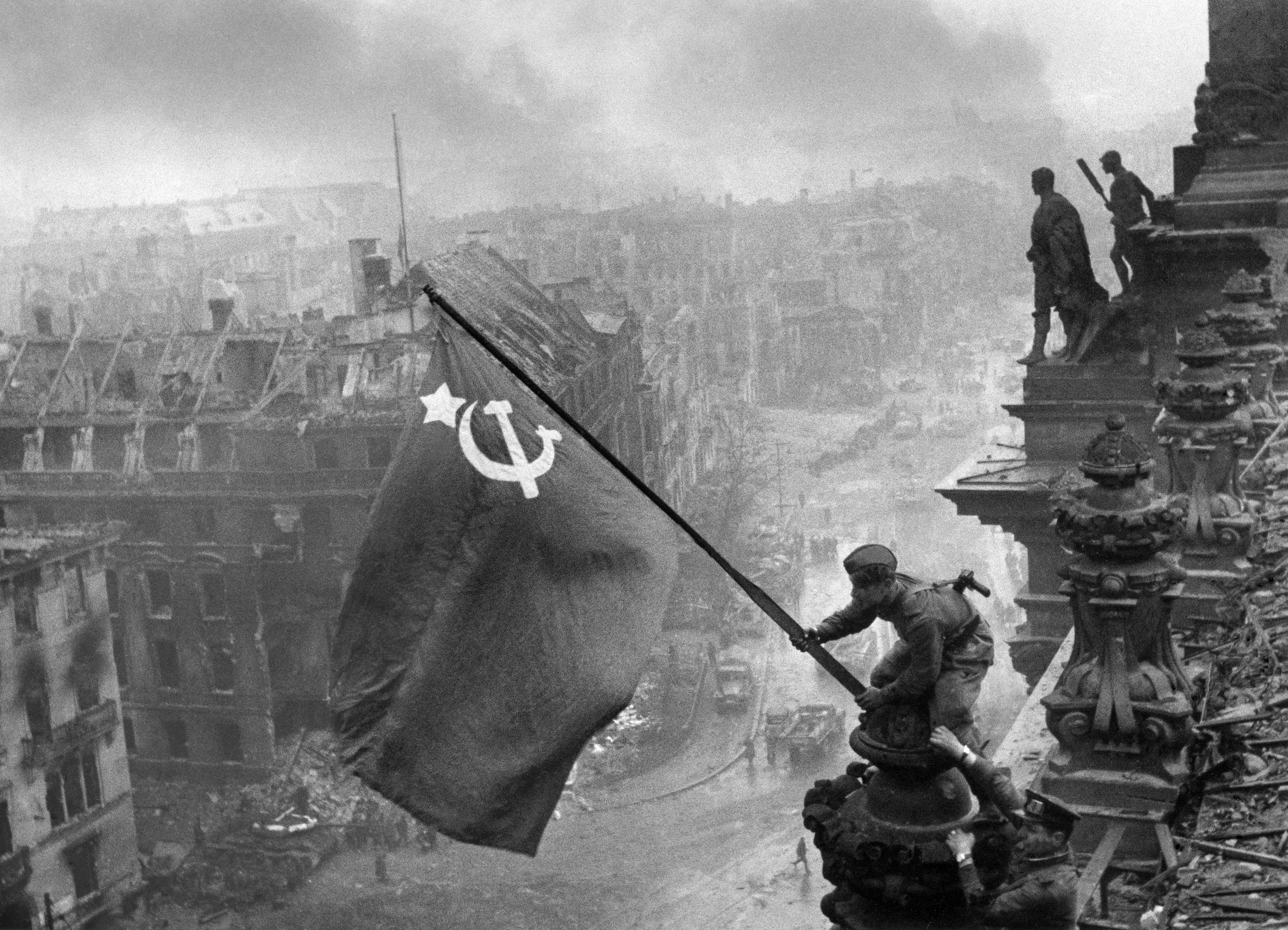 Soldiers raise the Soviet flag on the roof of the Reichstag in Berlin in May 1945.
Yevgeny Khaldei (1917-1997)
History isn’t always what we might assume it to be, and there appears to be no consensus among nations over the question of which country contributed most to the Allies’ Second World War victory in Europe.

The North American public tends to assume that the United States played the greatest role in bringing about VE-Day. But don’t tell that to a Russian.

As many as 30 million Soviets are estimated to have died between Germany’s June 1941 invasion of the USSR and the war’s end, while the number of German troops killed by the Soviets is estimated at more than 3.5 million. That’s three-quarters of the total 4.7 million German military killed by Allied forces in the Second World War. 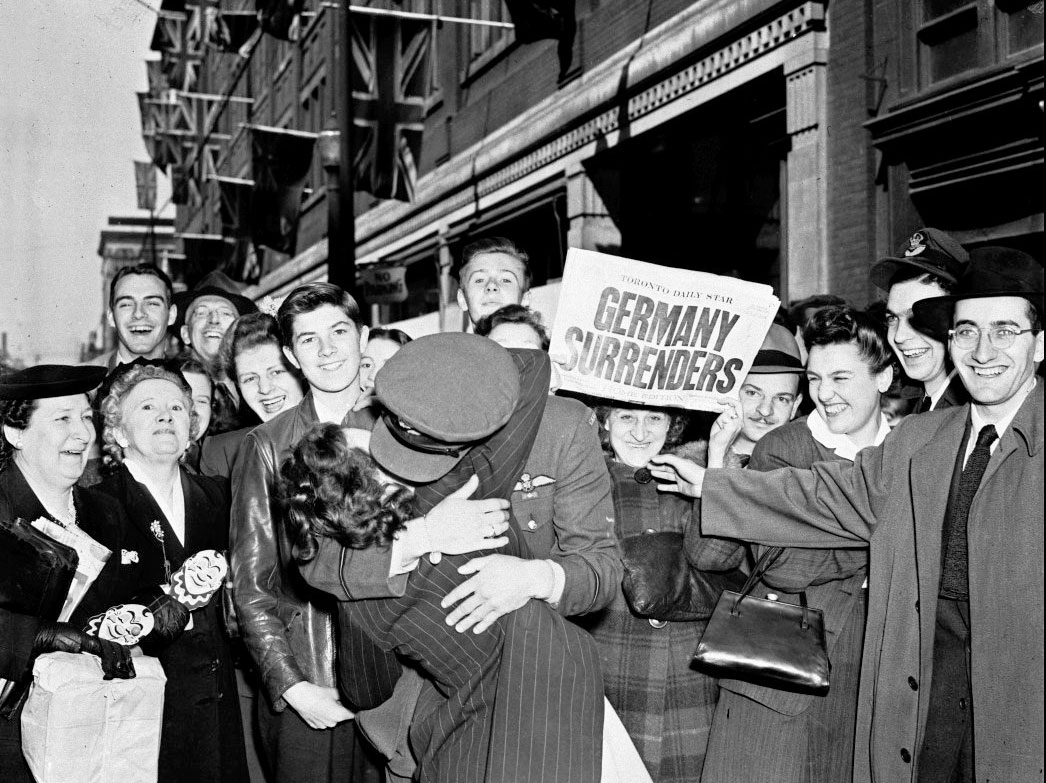 VE-Day celebrations in Toronto on May 8, 1945.
CITY OF TORONTO ARCHIVES FONDS 1257, SERIES 1056, ITEM 195
That was preceded, of course, by Britain’s staunch defence, against all odds, during the Battle of Britain and the Blitz, when Prime Minister Winston Churchill promised, “we shall never surrender.” Try telling a Brit that, as the last bastion of democracy in Europe in 1940, their contribution did not save the world from Nazi tyranny.

YouGov, a market research and data analytics firm headquartered in the United Kingdom, recently asked citizens of Britain, the United States, France and Germany which country they thought played the most important role in defeating the Nazis. (See Results) 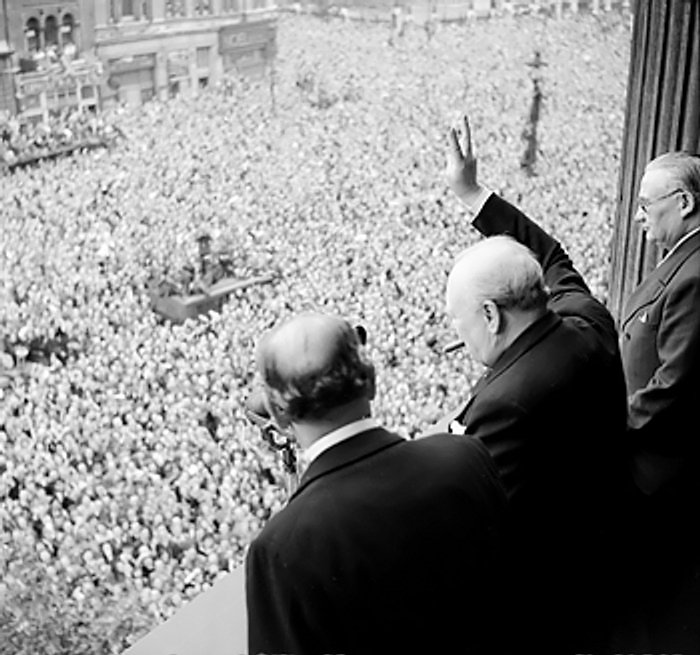 Winston Churchill waves to crowds in Whitehall, London. The war with Germany was over.
IWM Photo No.: H 41849/Wikimedia
Half the Britons polled said their country played the most important role, while 13 per cent said the Soviets and just nine per cent credited the Americans.

Respondents in the other three nations were far more likely to give the most credit to the Americans. The sentiment was strongest in France, at 56 per cent, surprisingly less so in the U.S., at 47.

Germans were more equitable in their assessment—34 per cent of those polled chose the U.S.; 22 per cent the Russians (compared to 12-15 per cent among the others). The survey didn‘t distinguish between residents of the former Germanys. 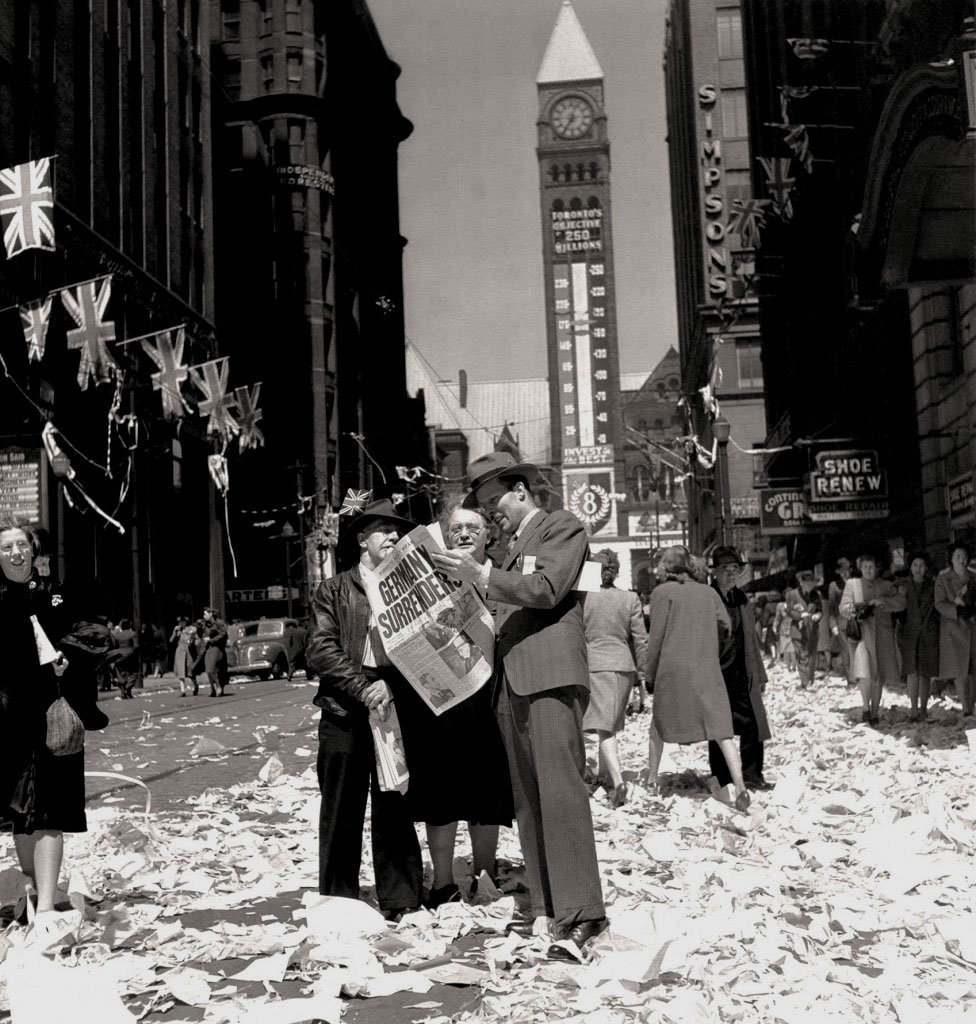 Toronto is ankle-deep in paper following VE-Day.
RONNY JAQUES, NATIONAL FILM BOARD, LIBRARY AND ARCHIVES CANADA—PA114627
Interestingly, in a post-war survey conducted by the Institut français d’opinion publique in May 1945, 57 per cent of French respondents credited the USSR with making the greatest contribution to the Allied victory, even though Soviet troops never set foot on French soil. The figure now is 15 per cent. 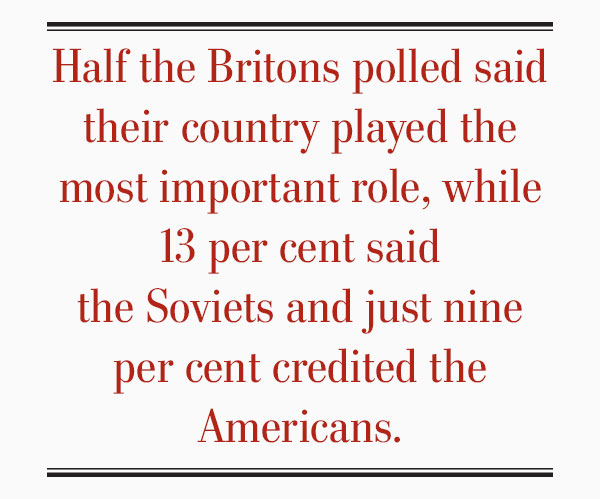 With those results in mind, Front Lines approached Legion Magazine’s stable of respected war historians with the question: Who played the greatest role in the Second World War’s Allied victory in Europe—the United States, the United Kingdom, or the Soviet Union? And why? Here are their answers:

The Soviet Union without a doubt. Britain’s hanging on after Dunkirk mattered greatly, of course, and so did the vast industrial and military resources of the United States. But the USSR, despite its catastrophic defeats in the first year after the German invasion, swallowed the Wehrmacht whole in the steppes, inflicted huge losses on it, and wore it down. The Soviets took enormous military and civilian casualties but triumphed in the war against Hitler. It must be said that aid from the Western Allies mattered greatly in this victory, but the Russian people fought and won the war.

The USSR made the greatest contribution to the Allied victory in Europe. Wars are won by physical means and morale. On the physical side—men, materiel and money—the Soviets contributed about 62 per cent of Allied soldiers (491 divisions in 1945 versus 125 American/British), 57.5 per cent of all artillery, 45 per cent of tanks, 25.6 per cent of aircraft and 34.7 per cent of military expenditures. All Soviet resources were directed against Germany; American and British ones were used against other enemies in other theatres. On the morale side, unlike Britain and the U.S., the Soviets had parts of their homeland occupied by Germany, giving added impetus to defeat the invader.

David J. Bercuson: Author, director of the Centre for Military and Strategic Studies, University of Calgary

Although the United States played the dominant role, all three major Allied countries were necessary to victory in Europe. The most important contribution made by Britain was to survive Hitler’s onslaught in 1940. Had the British failed to hold off the Nazis, the Second World War would have taken a far different turn. Britain also played key roles in North Africa and the Mediterranean. The Soviet Union suffered greatly. But the Soviets killed far more German soldiers than rest of the Allies together. It was American industrial power, however, that proved crucial in the balance. American factories turned out more airplanes, tanks, ships and shells than Britain and the USSR combined, allowing the Americans to defeat Japan virtually singlehanded and play a huge role in the victory over Nazi Germany. 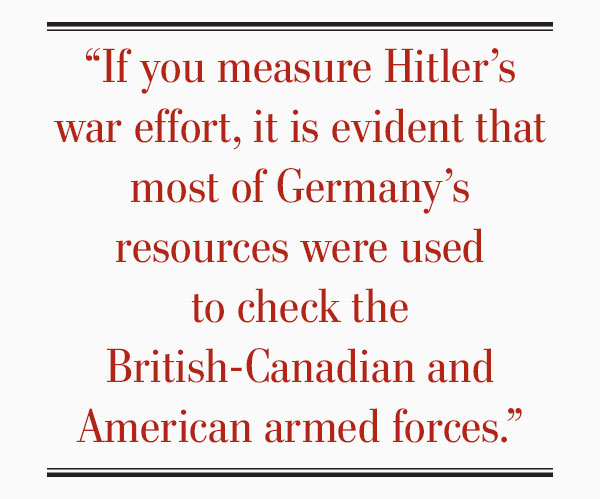 Marc Milner: Author, director of the Brigadier Milton F. Gregg Centre for the Study of War and Society, University of New Brunswick

You can’t credit one element—or one player—with winning such a complex global war. Russia might not have survived the initial onslaught without British tanks defending Moscow in December 1941, or won great battles in 1944-45 without American industry and the role the Allied bombing offensive had in distracting German manpower and resources. There would have been no war to win if the British had not stuck it out in 1940-41, and carried the burden of the blockade, fighting and bombardment in the west in 1942-43. The massive American armies that finally swept into Germany came from the west. Then there is Germany itself, which contrived through arrogance, incompetence, brutality and genocide to lose a war it ought to have won easily! The united nations beat Germany and its satellites.

There were many other combatants. All helped erode Germany’s attempt at world domination. But let’s look at the Big Three. In June 1940, Britain stands alone. Had it fallen first, Hitler’s ill-advised invasion of the Soviet Union may well have succeeded. Or not. There’s no way of knowing. Had Japan not bombed Pearl Harbor, the U.S. may never have taken on Germany. And there’s no guarantee Hitler would have turned his sights on America if Germany had defeated the Soviets. Supplying and maintaining an invasion force against a nation as large and distant as the U.S. was sure to give even a megalomaniac like Hitler pause. Ultimately, there are too many variables in the “who won the war” game to determine a champion.

Winning the Second World War required the full efforts of all the Allied powers but most accounts place too much emphasis on the Eastern Front and too little on the war waged in the west. If you measure Hitler’s war effort, it is evident that most of Germany’s resources were used to check the British-Canadian and American armed forces. The naval war above and below the sea is an obvious example but it was the strategic air offensive that forced Germany to divert massive resources to the defence of the fatherland. Anti-aircraft guns, day and night fighters, radar, the V1 and V2 revenge weapons and much else was committed to the defence of Germany well before D-Day or the Soviet Army’s 1944 offensive.

Geoffrey Hayes: University of Waterloo professor and a director of the Canadian Battlefields Foundation

By the scale of dead alone, the Soviet Union played the greatest role in the Allied victory in Europe. Other numbers, especially in industrial production, support the view that the Americans played the crucial role in Europe. But numbers are deceiving. The war began in September 1939 after the Axis allied with the Soviets. The Americans did not enter the war until December 1941. The British were not the largest force to help defeat Hitler. Their goals were often misguided. But with German victory inevitable in the spring of 1940, the British fought on. That determination in 1940 and 1941, shared with its ranking ally, Canada, offered that most intangible of measures, hope, that the Allies would eventually triumph.

Hugh A. Halliday: Author of a dozen books, including Valour Reconsidered: Inquiries into the Victoria Cross and Other Awards for Extreme Bravery

Approximately 70 per cent of all German troops killed fell on the Eastern Front. It goes without saying that the Soviet Union played the largest role in determining victory.

So that’s three for the Soviet Union, two for the team, one for the United States, one for Britain, and one for the western front. What do you think?

PrevPrevious ArticleMore angel than mortal: The nursing sisters of The Great War
Next ArticleTwo pictures, a thousand stories and millions of livesNext