Canadian peacekeepers challenged in the Balkans 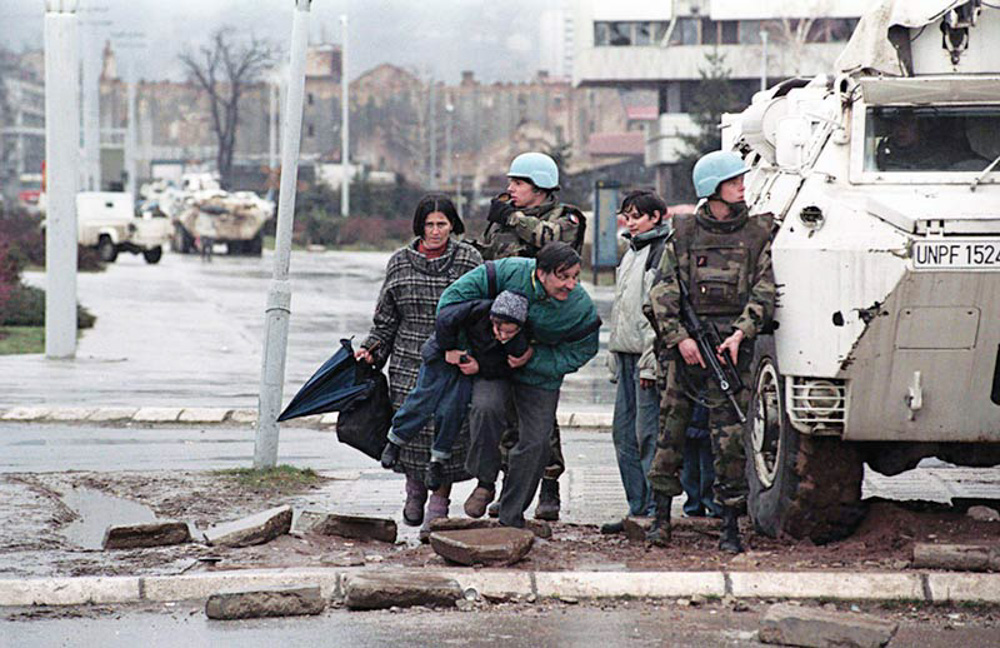 Residents of Sarajevo take cover from sniper fire behind an UN armoured vehicle in 1993.

DANILO KRSTANOVIC/REUTERS/ALAMY/2D1GJ50
Although nearly as many Canadian military personnel served in the long and bloody civil wars in the Balkans as the 40,000 deployed to the war in Afghanistan, Canadians are much less familiar with their service and sacrifice.

The CAF first went to the troubled area in 1991, shortly after the Federal Republic of Yugoslavia began to break up.

They went in as peacekeepers—but discovered there was no peace to keep.

In response to the growing violence, a United Nations Protection Force, which included Canada, was formed in 1991. By the time a peace accord ended the first civil war in December 1995, more than 16,000 Canadians had served. Eleven had died.

The seeds of the conflict were planted in the Balkans at the end of the First World War, when the Austro-Hungarian Empire dissolved. Croat, Slovenian and Bosnian territories united with the Serbian Kingdom to form Yugoslavia.

Despite their differences—some wanted a strong central state, others favoured decentralization—the neighbouring regions rubbed along together as a country until the Second World War. The Nazis invaded and broke up Yugoslavia, but it was reunited at the end of the war by a partisan force headed by Josip Broz Tito, a Communist sympathizer.

But from the get-go, it was not a happy reunion.

Fuelled by wartime atrocities, the embers of centuries-old political, ethnic and religious discord began to smoulder. But Tito was a strongman who kept the opposition tamped down.

After he died in 1980, power was transferred from the Socialist Federal Republic of Yugoslavia to its eight constituent republics; no longer was there a central force controlling government policy. In 1989 when Communism collapsed, so too did Yugoslavia’s economic and political stability.

Montenegro and Serbia elected to remain within the Socialist Federal Republic of Yugoslavia, while Croatia, Slovenia, Macedonia and the Republic of Bosnia and Herzegovina wanted independence. All of them had sizeable ethnic and religious minorities. 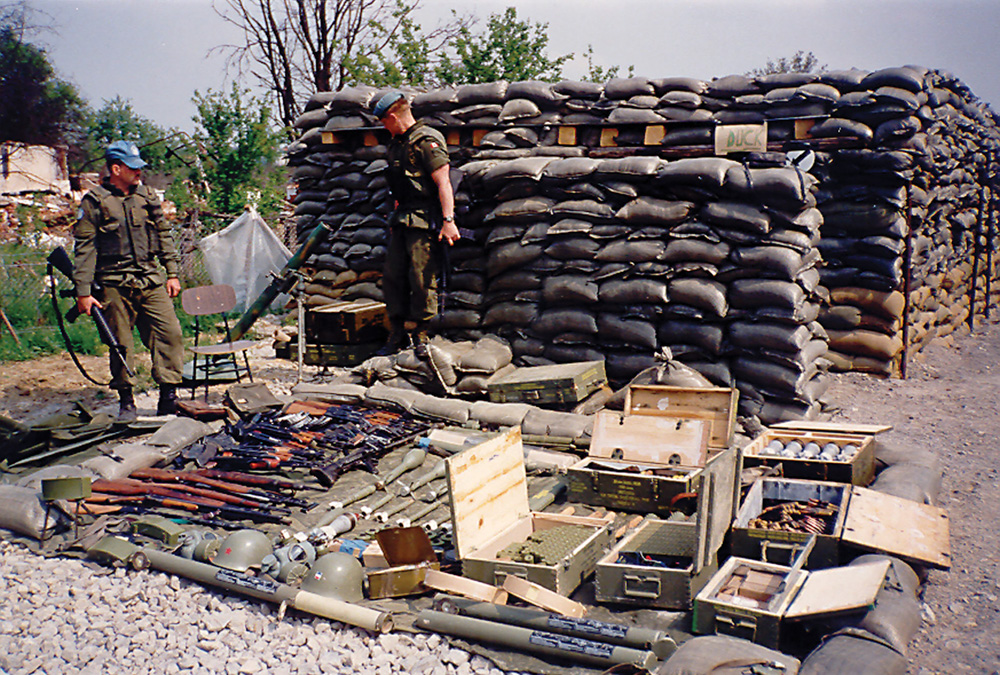 MASTER CORPORAL PHIL TOBICOE/PPCLI ARCHIVES
Slovenia declared independence in 1991, starting a series of civil wars that spread like wildfire through the Balkans, igniting in Croatia from 1991-1995; Bosnia and Herzegovina from 1992-1995; Kosovo from 1998-1999; and the former Republic of Macedonia in 2001. Canadians served in all those countries.

In August, the world was shocked by revelations of massacres and rapes attributed to Serbians.

The Yugoslav People’s Army, the majority of whom were ethnic Serbs, set out to crush governments that wanted to leave Yugoslavia, spurred on by Serbian President Slobodan Milosevic.

Slovenia was attacked first, but sent the Yugoslav People’s Army packing after 10 days.

Croatia was not so lucky. A sizeable Serb minority wanted to remain in Yugoslavia and sided with the attacking army. Croatian Serbs attacked the ancient city of Vukovar, the first victim of purported ‘ethnic cleansing,’ accomplished by a massacre of 200 Croats, Hungarians and Muslims and the expulsion of about 20,000 non-Serbs from the city.

It was the first of many atrocities committed on, and by, ethnic and religious minorities during the next decade.

In 1992, war broke out in Bosnia and Herzegovina, targets of land grabs by neighbouring Serbia and Croatia, supported by large internal minorities of ethnic Bosnian Serbs and Bosnian Croats.

In April, Bosnian Serbs, who rebelled and were supported by the Yugoslav People’s Army and Serbia, began a 44-month siege of the capital Sarajevo; more than 10,000 of its 350,000 residents were killed. In August, the world was shocked by revelations of massacres and rapes attributed to Serbians.

The United Nations sent peacekeepers, including Canadians, into Croatia and Bosnia and Herzegovina in 1992 for three bad and bloody years. 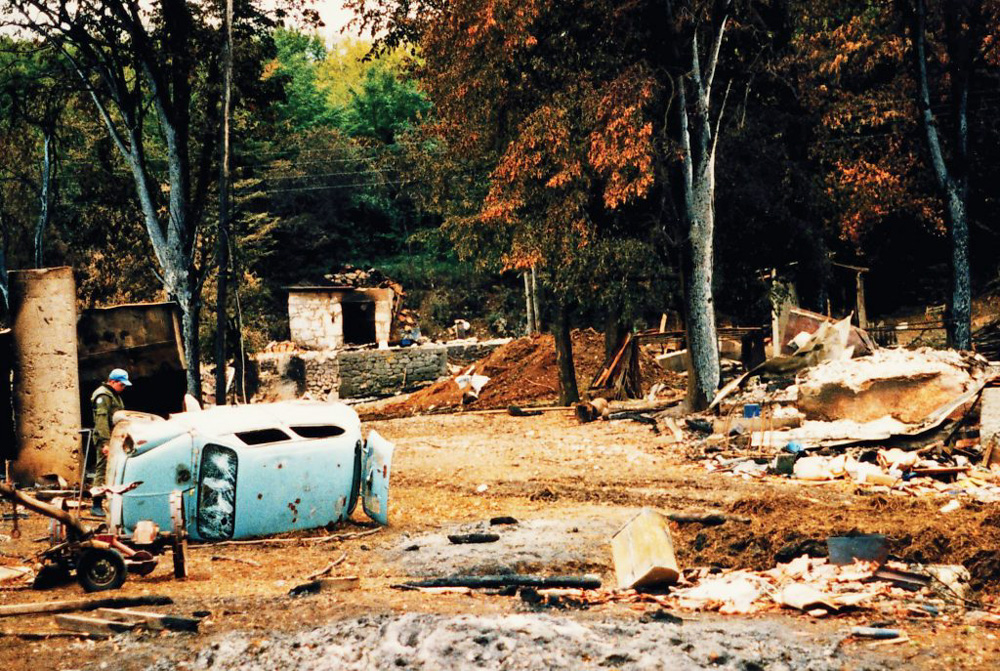 A UN soldier surveys the damage in the town of Medak after the battle in September 1993. Every house and hut was blown up and many of the ruins were left booby-trapped by Croatian troops.
MASTER CORPORAL PHIL TOBICOE/PPCLI ARCHIVES/20.39.06
Canadian peacekeepers protected the airports and escorted relief convoys, frequently coming under fire.

On Sept. 9, 1993, near the village of Medak, Croatian troops attacked to push back the Serbian line, creating a pocket containing Serbian people surrounded by territory controlled by Croatia. International pressure forced Croatia to agree to a ceasefire and to leave the Medak Pocket.

The Croations didn’t back down and on Sept. 15, they attacked the UN peacekeepers, who dug in and returned fire. It was the heaviest combat for Canadian troops since the Korean War. Four Canadians were wounded in 15 hours of battle, but the Croatians were driven back.

The next day at noon, their forces agreed to withdraw. The Canadian commander, Lieutenant-Colonel James Calvin, believed that extra time would be used to massacre Serbs in the Medak Pocket. He held a news conference to bring it to international attention.

Under global pressure, Croatia relented and allowed the UN troops in, but it was too late for the thousands of Serbians found slaughtered in their homes and villages. It was an atrocity and was responsible for post-traumatic stress and moral injuries of many Canadians who served, years before there were specific programs for victims with such wounds.

In 1996, the focus turned to establishing a democratic nation that could sustain peace without international support.

In July 1995, a UN-protected safe area in Srebrenica in eastern Bosnia was taken by Bosnian Serb forces, who killed up to 8,000 Muslim men and boys in the worst massacre in Europe since the Second World War.

By the time a peace accord was struck in November 1995, ethnic tensions were boiling and the flames of war had spread; peacekeeping missions followed to Macedonia and Croatia, as well as Bosnia and Herzegovina.

Canadians continued to serve in the Balkans after NATO took over peacekeeping at the end of 1995. CAF members stayed in Bosnia and Herzegovina, protecting citizens, patrolling ceasefire lines and the borders. In 1996, the focus turned to establishing a democratic nation that could sustain peace without international support.

In 1998, Albanians in Kosovo began to fight against persecution. Serbian forces attacked Albanian civilians in Kosovo and Milosevic refused to sign a ceasefire agreement. NATO began a bombing campaign to drive the Serbian military from Kosovo. Canada contributed 18 CF-18 jets in its first air-combat missions since the Korean War.

Milosevic finally signed a withdrawal agreement in June 1999, after 78 days of bombing.

About 1,300 Canadians were initially deployed as part of NATO’s Kosovo peacekeeping force, dropping to about 650 in 2004 and to less than 85 when the European Union Force took over. The CAF withdrew its last troops from Bosnia-Herzegovina in 2007.

And CAF members, rotating in a few at a time, still serve in Kosovo as part of international operations that have been running since 1999.

Over time, the term “peacekeeping mission” has evolved into “peace-support operation,” in no small part to cover situations in which there is no peace to keep.