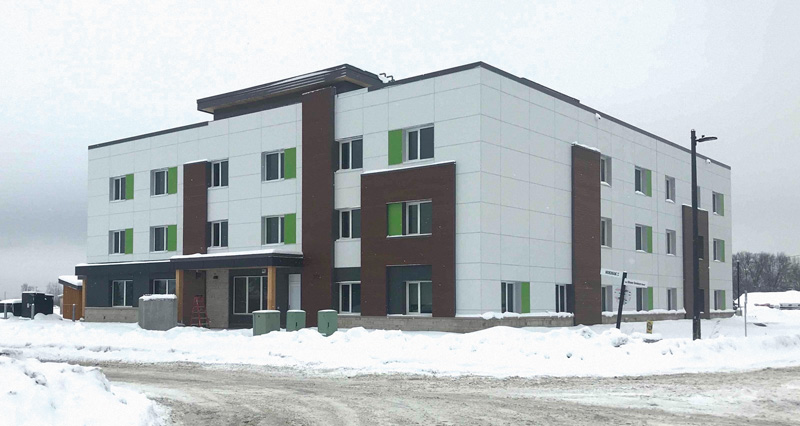 A new 40-unit veterans’ housing facility has opened at the former Canadian Forces Base Rockcliffe in Ottawa, the first of what its builders hope will be many across Canada.

Six years in the making, Veterans’ House is a project of the Ottawa-based Multifaith Housing Initiative charity, which plans to build similar facilities in other cities.

Peer-support staff will be in the building during the day to help residents navigate their new lives.

It is located in the Andy Carswell Building, named for a former Royal Canadian Air Force pilot. The facility includes nine accessible apartments for those with disabilities.

“I’m over the moon!” said an emotional Dave Gordon, chair of Ontario Command’s Provincial Homeless Veterans Program. “One homeless veteran is one too many, and one less on the street gives you a warm and fuzzy feeling.”

The Royal Canadian Legion’s Ontario Command and District G of Ontario Command each donated $100,000 to the project. Half the money is designated for peer-support initiatives. Ontario Legion branches and other organizations across the province provided additional donations. The Legion National Foundation has pledged $200,000 to the facility.

Prior to the opening, Legion volunteers in Aurora, Ont., helped ship 40 “apartment kits” filled with housing necessities like kitchenware and bedding. Ontario Command also provided 40 mattresses and a TV for the common room.

A Legion committee will help residents with other needs. Peer-support staff will be in the building during the day to help residents navigate their new lives, including helping them to fill out applications for assistance from Veterans Affairs Canada. Job recruiters will share employment opportunities.

Homeless veterans have made up about 8.5 per cent of Ottawa’s homeless shelter clients in recent years. The new building was to house 16 residents but, as estimates of the number of homeless veterans grew, the design was expanded to house two dozen, then 30, then 35. The project was capped at 40 in order to maintain the feeling of community.

The new residence includes quiet indoor spaces and calming gardens with winding paths, water features and an area for veterans to walk service dogs. There are indoor and outdoor exercise facilities, individual rooms for when residents want privacy and communal spaces for socializing.