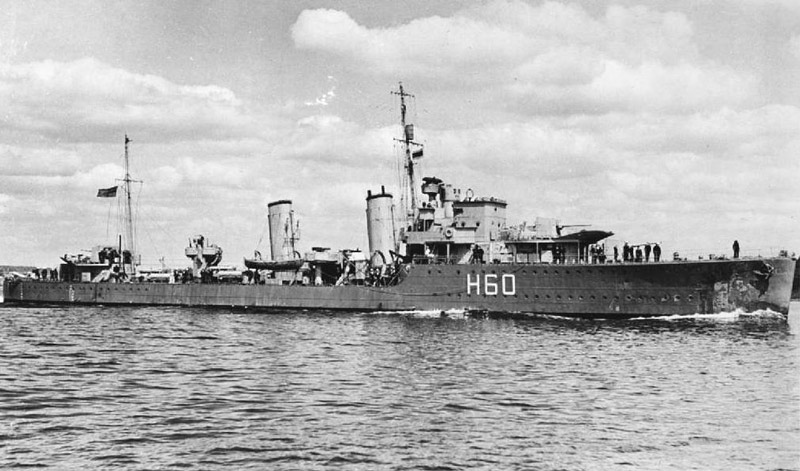 HMCS Ottawa was one of the five warships responsible for protecting Convoy HX-133 on its mission to Liverpool, England.
Wikipedia
It was a taste of what was to come.

Convoy HX-133—49 merchant ships and an escort of five warships—left Halifax on June 16, 1941, bound for Liverpool, England. Not all of them would arrive.

The merchant ships were arranged in nine short columns, with the escorts—HMC ships Chambly, Orillia and Collingwood, all of them corvettes, and two destroyers, HMCS Ottawa and HMS Wolfe—dispersed among and around them. They sailed into heavy fog.

“During this time there were several collisions resulting in five ships having to return to port,” wrote Commodore R.R. Gill of the cargo ship Glenpark. “Gales were experienced which slowed convoy down considerably.”

As well, convoys “could only go as fast as the slowest ship,” recalled Ottawa veteran Georges Joseph Charrier in a Memory Project interview. The older ships were travelling 13-15 kilometres an hour while Ottawa could reach almost 65 km/h. U-boats could travel nearly 18 knots (33 km/h) on the surface, less than half that when submerged.

“Sometimes we couldn’t always protect the whole convoy because there were a lot of submarines,” said Charrier.

As the convoy crept eastward, German submarines were deploying toward Greenland searching for prey. On June 23, about 700 kilometres off the southern tip of Greenland, the convoy was spotted by U-203.

German U-boat U-203 spotted Convoy HX-133 on June 23, 1941, and sank the Norwegian merchant ship Solôy the following day.
Wikipedia
A wolf pack was summoned. Throughout the next week, eight subs nipped at the heels and ripped into the flesh of the convoy.

But the British had intercepted German communications and knew the number of U-boats and approximately where they were. Five ships were diverted from other convoys to beef up HX-133’s escort. The convoy was ordered to alter course and begin offensive sweeps.

But the pack was on the scent. In the small hours of June 24, Glenpark spotted a sub, which dove, likely under the convoy. Minutes later U-203 sank Norwegian merchant ship Solôy. The escort vessels scrambled and one dropped a depth charge, but that sub had slipped away.

In the morning, U-371 sank Vigrid, which had fallen behind the convoy with engine problems. Twelve hours later, U-651 sank merchant ship Brockley Hill.

The action continued throughout the night into June 25. At 10 p.m., a U-boat was spotted and the convoy took evasive action. At 1 a.m., a sub surfaced close to the convoy, but submerged when a British ship attempted to ram it. At 3 a.m., there was another sighting of a sub on the surface.

On June 26, three Sunderland flying boats were dispatched to keep an eye on the convoy. At about 1 p.m., one spotted a U-boat and the convoy again took evasion action.

The wolf pack got bolder in the dark, after the aircraft had departed. Just before 11 p.m., U-79 torpedoed and damaged one ship. As the escort searched for that sub, U-569 torpedoed three ships, sinking Has Maasdam and Malaya II, which, loaded with liquid TNT, exploded spectacularly.

Daylight didn’t stop the attacks. At 7:35 a.m., a reinforcement warship made sonar contact with a sub and dropped depth charges, and again after a sub attack at 8:20 a.m.

The enemy had strength for one more attack.

But in the afternoon, the hunter became the hunted. Many depth charges forced U-556 to the surface, where a fierce attack forced its crew to abandon ship before the sub was sunk.

Expecting heavier fighting ahead, the convoy escort was reinforced yet again by a dozen more ships on June 27. Several U-boats had fallen out of the pack, running out of fuel or suffering battle damage.

But the enemy had strength for one more attack.

Just after midnight on June 29, U-651 sank Grayburn and collided with another ship before making off. The escort had been beefed up enough to devote five ships to stalk the sub, dropping more than a dozen depth charges during the pursuit. At about 5:30 a.m., U-651 sank; 44 crew were captured.

British steam merchant Grayburn was hit by two German torpedoes before sinking on June 29, 1941.
Clarence Hemeon
Convoy HX-133 arrived in Liverpool on July 3, 1941. Six of its ships had been sunk and many damaged, two seriously. Two German submarines had also been sunk, and “a number of U-boats received such incredible hammerings that it was assumed they had been sunk,” wrote Jak P. Mallmann Showell in Dönitz, U-boats, Convoys: The British Version of His Memoirs from the Admiralty’s Secret Anti-Submarine Reports.

This was only a taste of the carnage yet to come in the Battle of the Atlantic.