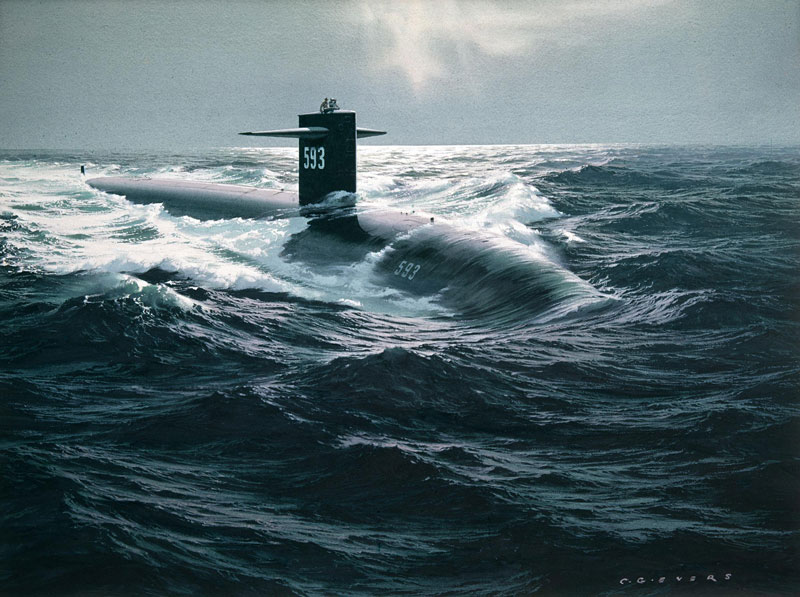 USS Thresher sank during a deep-dive trial in 1963.
C.G. Evers/U.S. Naval Institute Collection
At 8 a.m. on April 9, 1963, USS Thresher (SSN-593), the lead boat in its class of nuclear-powered attack submarines, left port at Kittery, Maine, for a series of dive tests in the deep ocean 350 kilometres east of Cape Cod, Massachusetts.

Some 25 hours later, while Thresher was nearing test depth during its first deep-dive trials after a nine-month refit, USS Skylark, the submarine rescue ship that was on station at the time, received a garbled message via underwater telephone.

“By mid-afternoon, 15 navy ships were headed to the search area.”

“Minor difficulties, have positive up-angle, attempting to blow,” came the call, and then a final, even more garbled message distinguished by the number “900” at 9:17 a.m.

Sonar technicians reported hearing mysterious “air rushing” noises. They were the last sounds Skylark heard from the 85-metre vessel, equipped with the most advanced weapons and sonar systems available and considered the fastest and quietest submarine of its day.

By mid-afternoon, 15 navy ships were headed to the search area. At 6:30 p.m., the commander of Submarine Force Atlantic ordered Portsmouth Naval Shipyard to notify families that Thresher was missing. They were to start with Irene Harvey, wife of the boat’s skipper, Lieutenant-Commander John Wesley Harvey. 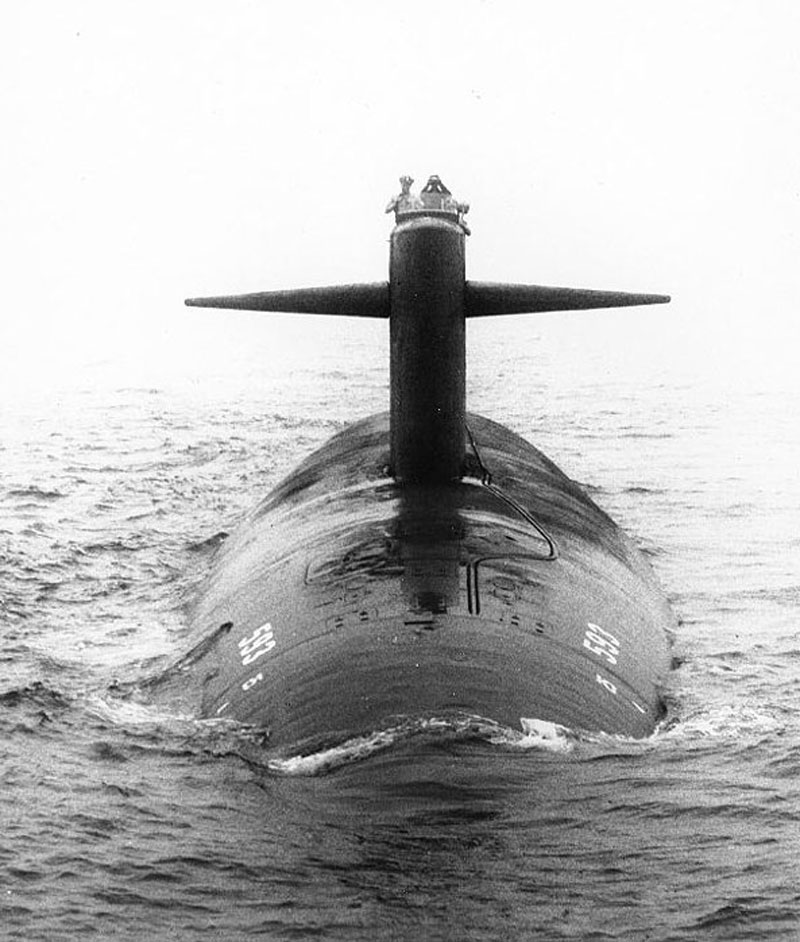 USS Thresher at sea on July 24, 1961.
U.S. Navy
By next morning, all hope was abandoned. The chief of naval operations, Admiral George W. Anderson Jr., called a Pentagon news conference and announced that Thresher had been lost with all hands—16 officers, 96 enlisted, and 17 civilian contractors.

President John F. Kennedy ordered flags lowered to half-staff for four days. It remains the second-deadliest submarine disaster on record, after the French boat Surcouf collided with a freighter in the Caribbean one night in February 1942 and sank with all 130 crew. 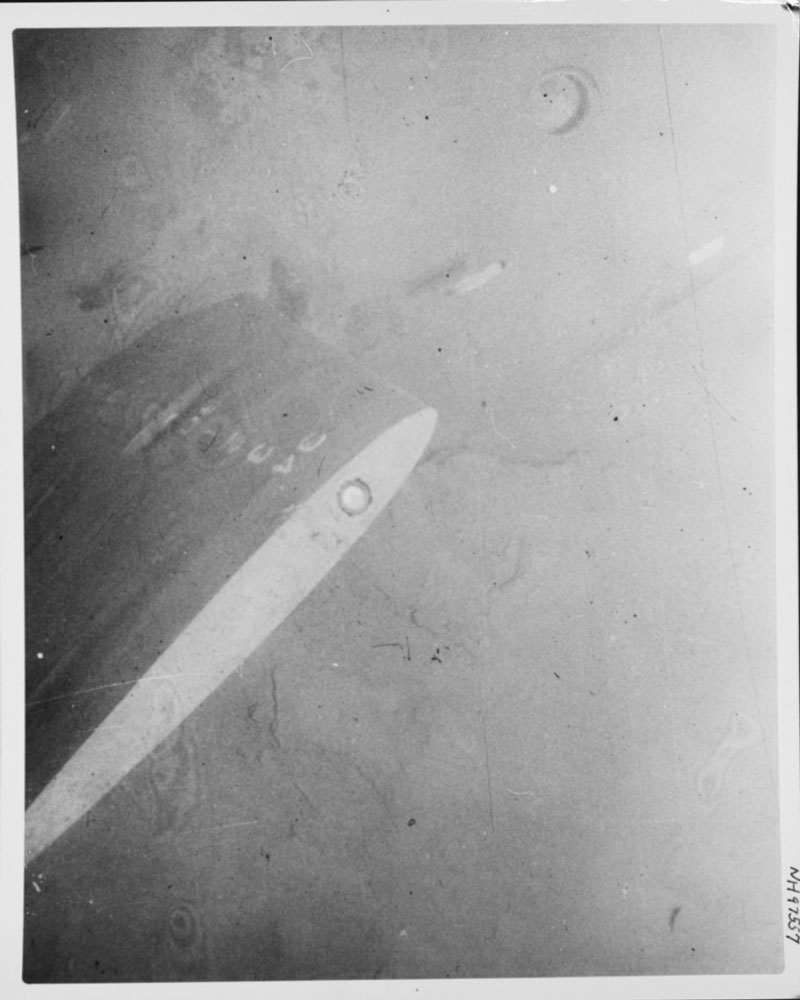 Thresher’s upper rudder, photographed from above by a deep-sea vehicle deployed by USNS Mizar.
U.S. Navy
Based on photographs, artifacts and an evaluation of Thresher’s design and operational history, a court of inquiry officially concluded that a saltwater piping system joint that relied heavily on silver brazing instead of welding had failed.

Crews were unable to reach equipment to stop the flooding in time and the ballast tanks failed to work properly.

The incoming water likely shorted out the boat’s electrical systems, it said, shutting down the reactor and causing a critical loss of propulsion, which the sub would have needed to surface. It wasn’t the first time the joints—made by pouring a melted, silver-based filler alloy into the link—had been an issue.

The navy investigation remained classified for decades, spawning a growing list of theories and scepticism surrounding what happened. That is until James Bryant, who commanded three Thresher-class submarines before he retired, sued in 2019 to get the files released. Last year, a judge ordered 3,600 pages declassified. They’ve been coming out in dribs and drabs ever since.

Experts say the latest batch, released in mid-March, proves the U.S. Navy was not covering anything up. The accident, like most disasters, was the result of a series of foul-ups that included but were not limited to a joint failure.

The documents suggest the submarine and its crew were the victims of a deadly arms race, over-confidence in the developing systems aboard their boat, and inadequate training in how to use them. 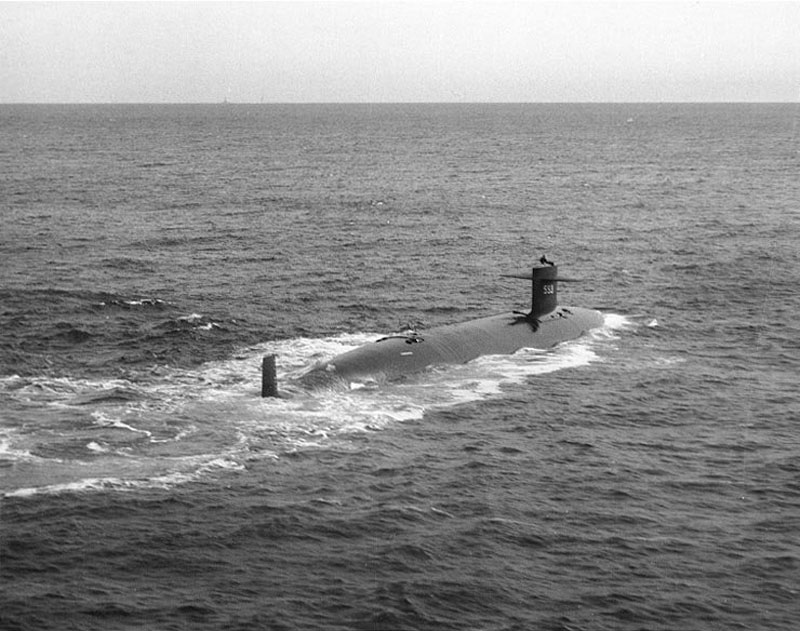 Thresher underway on April 30, 1961.
U.S. Navy
It was six months after the Cuban Missile Crisis and tensions were high. The Soviet Union had launched its first nuclear-powered submarine in 1958. There was a pressing need for larger, faster submarines like Thresher that were capable of diving to almost twice the depth of their Second World War predecessors.

The first Polaris-class ballistic-missile submarines were entering the fleet, requiring two crews and putting more pressure on the training and certification pipelines.

He said conventional navy thinking at the time was that nuclear-powered systems were sufficiently backed up to ensure propulsion and surfacing capabilities in an emergency. They never considered the possibility nuclear subs could lose power.

The Soviet threat and sense of urgency to counter it was prevalent among the 1960s-era investigators. The U.S. Navy had 28 nuclear-powered submarines in the fleet and 36 more planned when Thresher sank.

The emblem of USS Thresher, adopted in 1960.
U.S. Navy
The navy of the day underestimated the risks and didn’t give adequate consideration to how to rescue crews from these new depths, according to Stephen Walsh, who worked in the Submarine Safety Program, known as SUBSAFE, that grew out of the disaster and the 1968 sinking of USS Scorpion.

The watch in charge had taken 20 minutes to isolate a simulated leak in the auxiliary seawater system during a dockside simulation of flooding in Thresher’s engine room before sailing. At test depth with the reactor shut down, the boat would not have had 20 minutes to recover. Even after isolating a short circuit in the reactor controls, it would have taken nearly 10 minutes to restart the plant.

The implosion took 0.1 seconds. Some might have expected it, but the crew would never have known it happened.

“When you read the court of inquiry [you realize] how complicated the machinery is,” Friedman said, adding that to prevent disaster, crew “have to know where to go instinctively” when something starts to go wrong.

Training and engineering practices aboard nuclear subs were revamped after the Thresher and Scorpion sinkings, the latter with the loss of 99 crew. SUBSAFE was formed to oversee submarine design and construction. It is credited with the fact the U.S. Navy hasn’t lost a submarine in more than half a century.

Four sets of Thresher documents have been released since September 2020, along with two additional sets of related reports Bryant requested. Period testimony from the chief of naval personnel is still to come.

“Thresher was never decommissioned and remains on “eternal patrol.””

Bryant and other experts say the documents’ release is good for the U.S. Navy, putting to rest suspicions of a coverup and confirming that navy brass sought only to prevent operational details from falling into the hands of U.S. adversaries.

Now that the material is declassified, submarine safety instructors “can take it home, read it and take it into the classroom,” said Bryant, adding that graduate engineering students can also use it to better understand how to prevent future accidents from becoming disasters like the one that sank Thresher.

As is navy tradition, Thresher was never decommissioned and remains on “eternal patrol.” The designation derives from the fact that submarine patrols begin at departure from port and end on their return. Hence, the patrol for a sub that sinks never ends.