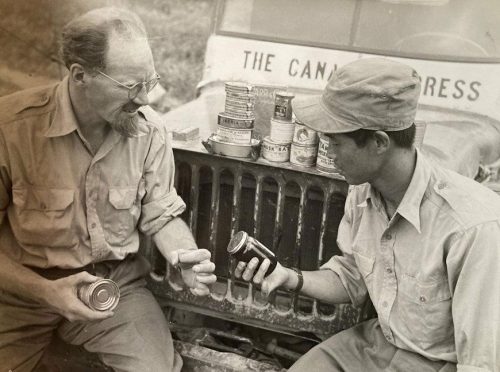 Bill Boss was the epitome of foreign correspondents.

Pierre Berton called him one of the toughest war correspondents he ever knew, a trusted and familiar newsman who “ate censors for breakfast.”

Recently, an Ontario firm auctioned off the estate of Gerard William Ramaut (Bill) Boss, 13 years after he died of pneumonia in an Ottawa hospital, age 90.

The collection of art, books, photographs, newspaper tearsheets, letters, telegrams, mementoes and press credentials showed the man known affectionately by his wire-service initials “bb” to generations of Canadian Press reporters and editors for what he was—a Renaissance man of the highest order. He was an eclectic, highly cultured, much-travelled and multi-talented writer and raconteur.

Born May 3, 1917, in Kingston, Ont., Bill Boss was the epitome of foreign correspondents—“a man with a mission,” one of many articles about him said—who roved the world’s hotspots in a goatee, khakis, silk scarf and black beret.

“The Bill Boss byline has always been a trusted and familiar one to Canadian newspaper readers,” Berton wrote in the Toronto Star in 1958.

“The stories about him at Canadian Press are truly the stuff of legends.”

“I got to know him in Korea, and he was the toughest reporter I encountered there. He wasn’t only tough physically; he was tough in other ways. He was as fiery as his red beard. He ate censors for breakfast,” said Berton.

bb’s career with the national news service was a relatively brief 14 years, but the legacy he left behind as one of the wire service’s legendary war correspondents endured until he died.

He was among the elite of Second World War reporters, ranking alongside the likes of Ross Munro and Bill Stewart of The Canadian Press, Matthew Halton and Peter Stursberg of CBC, and Charles Lynch of Reuters.

“Bill Boss is the last of the generation of Canadian Press correspondents from the Second World War who did a remarkable job of reporting from the battlefields of Europe and the Pacific,” said Scott White, editor-in-chief of The Canadian Press in Toronto at the time Boss died in October 2007.

“Boss built his own legend in Korea, where he was seen as the senior Canadian correspondent during the entire conflict. The stories about him at Canadian Press are truly the stuff of legends—even 60 years after the fact.” 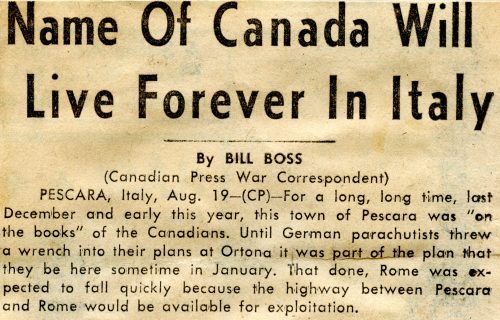 A newspaper article by Bill Boss dated Aug. 19, 1944, reported on the town of Pescara, Italy.
Cape Breton Military History Collections
bb was more than a journalist. A member of the Canadian News Hall of Fame with degrees in arts and philosophy, he spoke French, Italian, German, Dutch and Russian, along with a little Korean and Japanese, as well as his native English.

He played piano and organ, arranged and composed music, and conducted symphony orchestras in Canada, Italy and the Netherlands.

As a journalist, he worked for the Ottawa Citizen and The Times of London before serving a stint with the Canadian army in Italy as a public relations officer, often escorting journalists to the front.

After two years, Lieutenant Boss was “drafted” out of the army by Canadian Press chief Gillis Purcell to report as a civilian on the Allied advance through Italy and Northwest Europe. How Purcell, a former war correspondent who was known to wield great influence in high places, managed to convince military authorities to let Boss go, remains a mystery. But Boss seized on the opportunity.

“It was a terrific break for me,” he recalled years later. “As soon as the appointment was made official and I was free of army red tape, I grew a beard.

“He fought like a tiger to get his copy out, and to report things as he saw them,” Berton wrote. “Some high-ranking officers hated him and, on occasion, tried to have him thrown out of Korea because he wrote certain unpalatable things about the army there.

“But Boss wouldn’t be budged. He holds the Korean endurance record for war correspondents.”

Indeed, the intrepid Boss covered every major Canadian battle of the three-year war, acting not only as a front-line reporter but what yet another story about him described as an “unofficial entertainment officer, rumour-spiker, father confessor, shopping-service director and messing officer.”

Boss went to the quartermaster and said he needed Scotch enough for “the CP.”

His estate sale was peppered with pictures from the 1950-53 conflict, where he earned the 1951 National Newspaper Award for feature writing with a story recounting the travails of a Canadian soldier from the time he was wounded to his repatriation to Canada.

Two years later, Boss was awarded a second NNA, this time for what was then called “staff corresponding,” (overseas reporting) with a series of stories from Moscow.

But one of Boss’s greatest coups is not recognized by any award or official record.

He had just landed in Pusan with the Princess Patricia’s Canadian Light Infantry, and the resilient, ever-resourceful Boss wanted to shake his reliance on military authorities to get where he wanted to go. To do so, he needed transportation.

So Boss went to the quartermaster and said he needed Scotch enough for “the CP,” never exactly specifying that it was The Canadian Press, not the Command Post, that wanted the alcohol.

The quartermaster provided him with Scotch enough for an entire company, or about 120 men. Boss took the Scotch and traded it for a tent, a generator, a trailer and a jeep, which has gone down in the annals of wire-service lore as “The CP Jeep.” He subsequently established what was arguably the war’s first press office.

One picture in the sale showed him and a young Korean hoarding cans of food on the jeep’s hood, with “The Canadian Press” declaring his status on a banner below the windshield.

“Each of the correspondents had their own style of reporting and writing,” said White. “Bill did both with drama and flair—a characteristic he kept right until the end.”

In his later years, bb served as an adviser to Scott on the wire service’s coverage in Afghanistan, where it had committed to maintaining correspondent coverage throughout the entire war.

“He had a healthy mistrust for authority when it came to the reporter-military relationship,” Scott said at the time, “and that wisdom still applies today.”

Between wars and after, Boss reported from all over Europe, Africa and Asia. He worked in all of the wire service’s North American bureaus, from Vancouver to New York, where he played organ in St. Patrick’s Cathedral.

“He had a healthy mistrust for authority.”

One of his last stories was written for Veterans Affairs Canada during a 2004 reunion tour of Canadian battlefields and war cemeteries in Italy.

“They had climbed and fought in the very sight of the Germans higher up the mountains hereabouts, who were determinedly, but unavailingly, trying to oppose their advance,” he wrote from the graveyard at Agira in southern Italy, where 490 Canadians are buried.

“It seems so appropriate that this beautifully kept cemetery should be way up there at an altitude akin to that at which their lives were seized.”