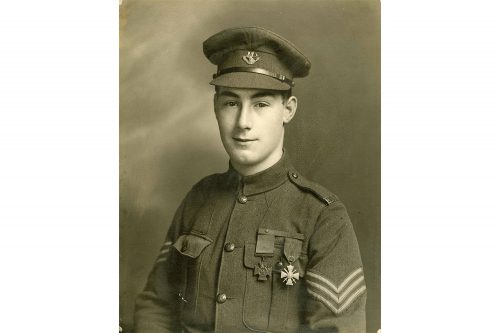 Thomas (Tommy) Ricketts of the Royal Newfoundland Regiment received the Victoria Cross in the Battle of Courtrai in 1918.
Wikimedia
A sturdy lad who had worked from an early age beside his fisherman father, Thomas (Tommy) Ricketts was not asked for proof of his birthdate when he followed in the footsteps of his brother George and joined the Newfoundland Regiment in September 1916, at the age of 15. He was destined to become a hero before his 18th birthday.

Private Ricketts was a seasoned soldier by the time the Hundred Days Offensive began in 1918. Sent to the front in July 1917, he went over the top at the Battle of Langemarck in August, fought at the Battle of Poelcappelle in October. In November, he was wounded early on in the First Battle of Cambrai, which claimed his brother in December.

After recuperating, Ricketts returned to the front in the spring of 1918, rejoining comrades in what was now the Royal Newfoundland Regiment in the attack on Keiberg Ridge at the end of September.

On Oct. 14, his battalion was less than 200 metres in front of the forward artillery which fired the first shots of the Battle of Courtrai at 5:35 a.m.

The battalion crossed a deep stream, then advanced about a kilometre, enduring heavy shelling and machine-gun fire. Ricketts and Lance Corporal Matthew Brazil were the only unwounded members of their platoon.

Lieutenant Stanley Newman, in consultation with Captain Sydney Frost, volunteered to lead a platoon, now including Ricketts and Brazil, to outflank the German strongpoint. About 100 metres short of the enemy, they were pinned down by enemy fire.

Brazil and Ricketts volunteered to continue the advance on their own. Carrying a Lewis gun, they moved forward in spurts, dropping some magazine carriers as they came under heavy fire from machine-guns and snipers.

Brigadier-General John Jack investigated why the advance stalled, came upon Frost’s men and, mistaking Ricketts and Brazil for the enemy, prepared to shoot them, until another officer pointed out “that the general was about to shoot his own troops,” wrote Gogos.

Ricketts and Brazil ran out of ammunition within 300 metres of the enemy stronghold.

Ricketts ran back about 100 metres to retrieve the magazine carriers. “The way it was with me was that I was determined that I would this time get them or they would get me,” he said in an interview with the Evening Telegram in 1919.

Ricketts retrieved the ammunition but became the focus of German fire on the return trip. “How he managed to dodge the fire from four German machine guns and an artillery piece firing point blank, concentrating their fire solely on him was nothing short of miraculous,” wrote Gogos.

“The enemy, seeing an opportunity to get their field guns away, began to bring up their gun teams,” reads the Victoria Cross citation. “Private Ricketts at once realized the situation…and by very accurate fire drove the enemy and their gun teams into a farm. His platoon then advanced without casualties….”

King George V arranged for a private investiture and presented the medal himself, notes Gogos. The king wrote in his diary the next day “Yesterday I gave the V.C. to Private Ricketts, Newfoundland Regiment, who is only 17 ½ now, a splendid boy.”

Ricketts was promoted to sergeant before returning home to Newfoundland, where he took advantage of an education fund, qualified as a pharmacist, married and raised a family. He died in 1967.

PrevPrevious ArticleUnmanned spy vessel washes up on Scottish island; nobody claims it
Next ArticleArtist shows hidden wounds of warNext