The mystery of the Thames Victoria Cross 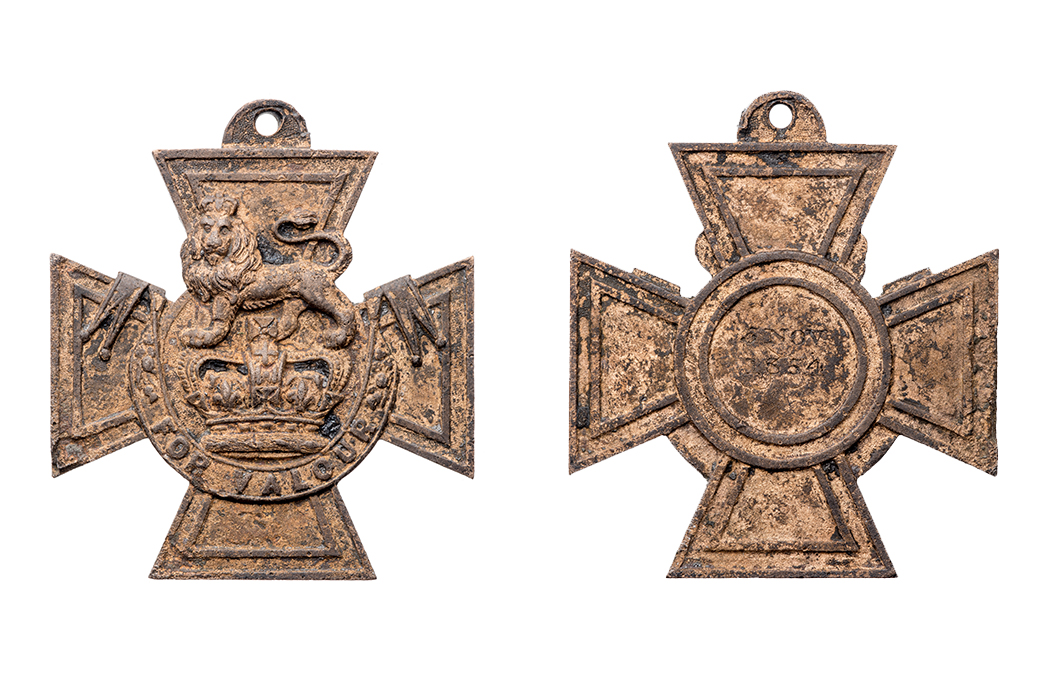 This Victoria Cross was found along the Thames River shore by Tobias Neto in 2015. It is dated 5 NOV 1854, making it one of the first VCs awarded.
Museum of London
In December 2015, a “mudlark” treasure-hunting along the bank of the Thames River in southern England found a corroded metal cross buried in the ooze exposed at low tide. His name was Tobias Neto, and the hunk of rusty metal was none other than a Victoria Cross.

“It was covered in mud,” Neto recalled. “I kept it and carried on detecting. Only when I got home did I realize I had a VC medal in my hands—I could read the writing ‘For Valour’ below the crown.

The Thames foreshore—that 150-kilometre strand of slimy shoreline exposed when the tide goes out—is a treasure-trove of history, a veritable archive of London’s long and colourful past where clay pipes, pottery shards, ships’ timbers, medieval stoneworks, rubble from the London Blitz and countless other artifacts are exposed daily. Many are preserved by the oxygen-free mud.

Treasure hunters (mudlarks, or beachcombers in Canadian parlance) like Tobias—who had found such rarities as a 13th-century Pilgrim badge; an 18th-century syringe to treat syphilis; Elizabethan hammered coins; Roman coins and a Celtic coin dated AD 40—are licensed and expected to report finds of historical import.

And that’s just what he did, turning the medal over to the Portable Antiquities Scheme, a voluntary program run by the British government to record small finds of archaeological interest found by members of the public.

It ended up in the hands of Kate Sumnall, a finds liaison officer at the Museum of London. The details—a lion, a crown, the date and the words ‘For Valour’—notwithstanding, she found herself confronted with more questions than answers: Was it a genuine VC or was it a replica? If real, who earned this medal? And how on earth did it end up in the Thames River? 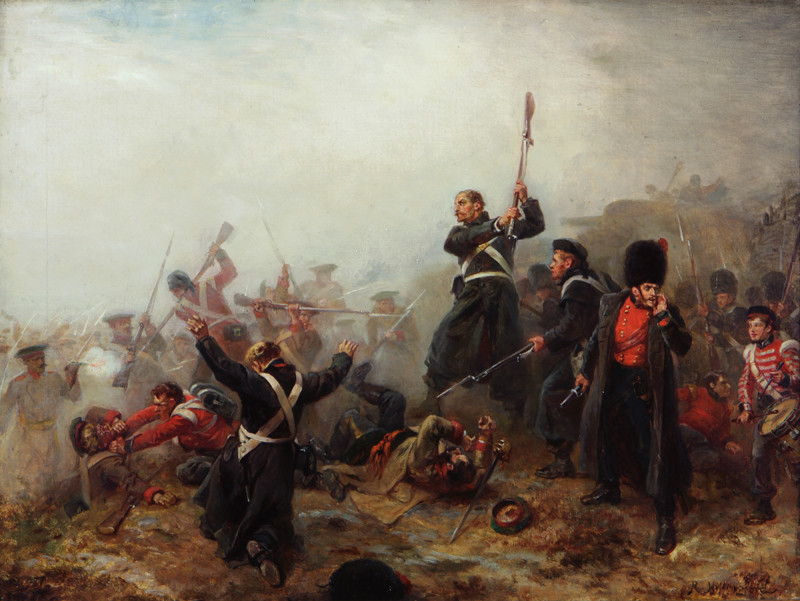 “Inkerman” by English artist Robert Alexander Hillingford. The ridge at Inkerman was a key objective to breaking the siege at Sevastopol during the Crimean War.
Robert Alexander Hillingford/The Knohl Collection
“Do you realize you have the find of a lifetime? You might be the only person in the world to have found a VC medal,” she told Tobias before launching her probe.

The VC is the highest and most prestigious award in the British honours system, presented for valour “in the presence of the enemy” to members of the British armed forces and, until they established their own VCs, to soldiers, sailors and air crew of Commonwealth countries. It has been awarded 1,358 times to 1,355 individuals, 98 of them Canadian.

According to the date—Nov. 5, 1854—the Thames medal was awarded for actions at the Battle of Inkerman during the Crimean War. Inkerman was a strategic ridge held by the Allies. The Russians, with superior numbers and guns, saw it as a key objective to breaking the siege at Sevastopol.

Outnumbered 67,979 to 13,239, the British, French and Ottoman Empire soldiers nevertheless held their ground.

The VC was first awarded by Queen Victoria on Jan. 29, 1856, to honour acts of valour during the Crimean War—making this medal, if proven genuine, one of the first VCs ever pinned on a soldier’s chest.

The early versions were struck from Russian cannons captured at Sevastopol itself, later ones from two Chinese cannons. It was the first British medal that was classless and could be awarded to any rank.

Was it a genuine VC or was it a replica?

Intrigued, Sumnall sought the advice of a curator at the Royal Artillery Museum and David Callaghan, a former director of Hancocks, makers of the Victoria Cross since its inception.

At the time, the Museum of London had on loan from a private collection the notebook from Hancocks alphabetically listing VC recipients with key information, some of which doesn’t appear elsewhere.

Sixteen VCs were awarded for the Battle of Inkerman. The Hancocks notebook, however, lists the battle’s date 23 times, including seven times in which individuals are connected to more than one action.

As with other medals, more than one award warrants a bar to the ribbon. Only three bars have ever been issued to the Victoria Cross and none were awarded during the Crimean War. There are, however, random examples of VCs engraved with more than one date. 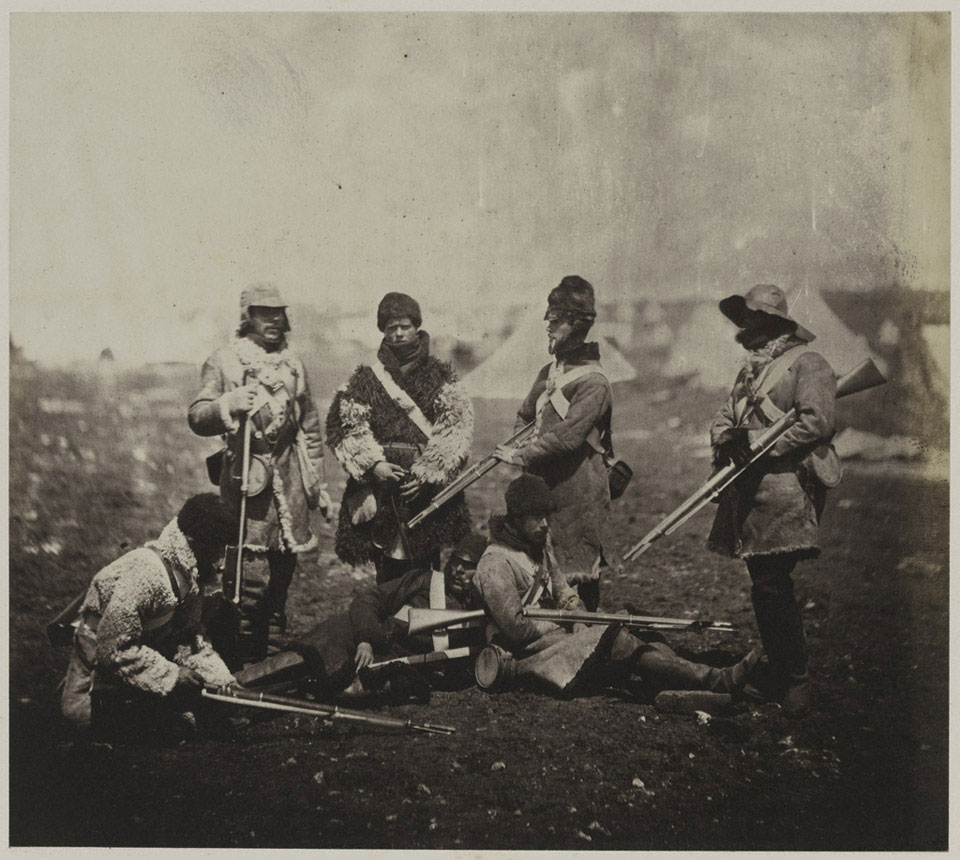 Seven soldiers of the 68th (Durham) Regiment of Foot (Light Infantry) are dressed for winter warfare in Crimea in 1855.
Robert Fenton/National Army Museum/1964-12-151-6-26
There are also lists describing where all of the Victoria Cross medals are currently located. Worth anywhere from a few hundred thousand dollars to more than $3 million apiece, a tenth of all VCs awarded were in the private collection of Lord Michael Ashcroft, a British-Belizean businessman and politician.

The locations of two of the VCs awarded for actions during the Battle of Inkerman were unknown at the time of Neto’s discovery.

The pair of unknowns, it was established, belonged to Private John Byrne of the 68th (Durham) Light Infantry and Private John McDermond of the 47th (The Lancashire) Regiment.

Callaghan, the former Hancocks expert, was unable to verify the authenticity of the Thames medal. As Sumnall noted in an account on the museum’s website, counterfeit or reproduction VCs are readily available on the Internet and the difference is not always easily discernible.

Accounts say he is buried in an unmarked pauper’s grave, an all-but-forgotten hero.

Furthermore, the quality of the repurposed metal of the originals, having once formed cannons and now a cross, is poor.

“I have been told it is not easy to work with,” Sumnall wrote. “As such, it is difficult to engrave consistently and naturally variations occur.

“Secondly, analysis of the metal would also be inconclusive as the tolerances are too wide. It comes down to a judgement call and, quite simply, more evidence is needed.”

Hancocks eventually did confirm the medal’s authenticity. It was now up to the experts to figure out to which of the two soldiers, Byrne or McDermond, it belonged. Both posed fascinating stories. 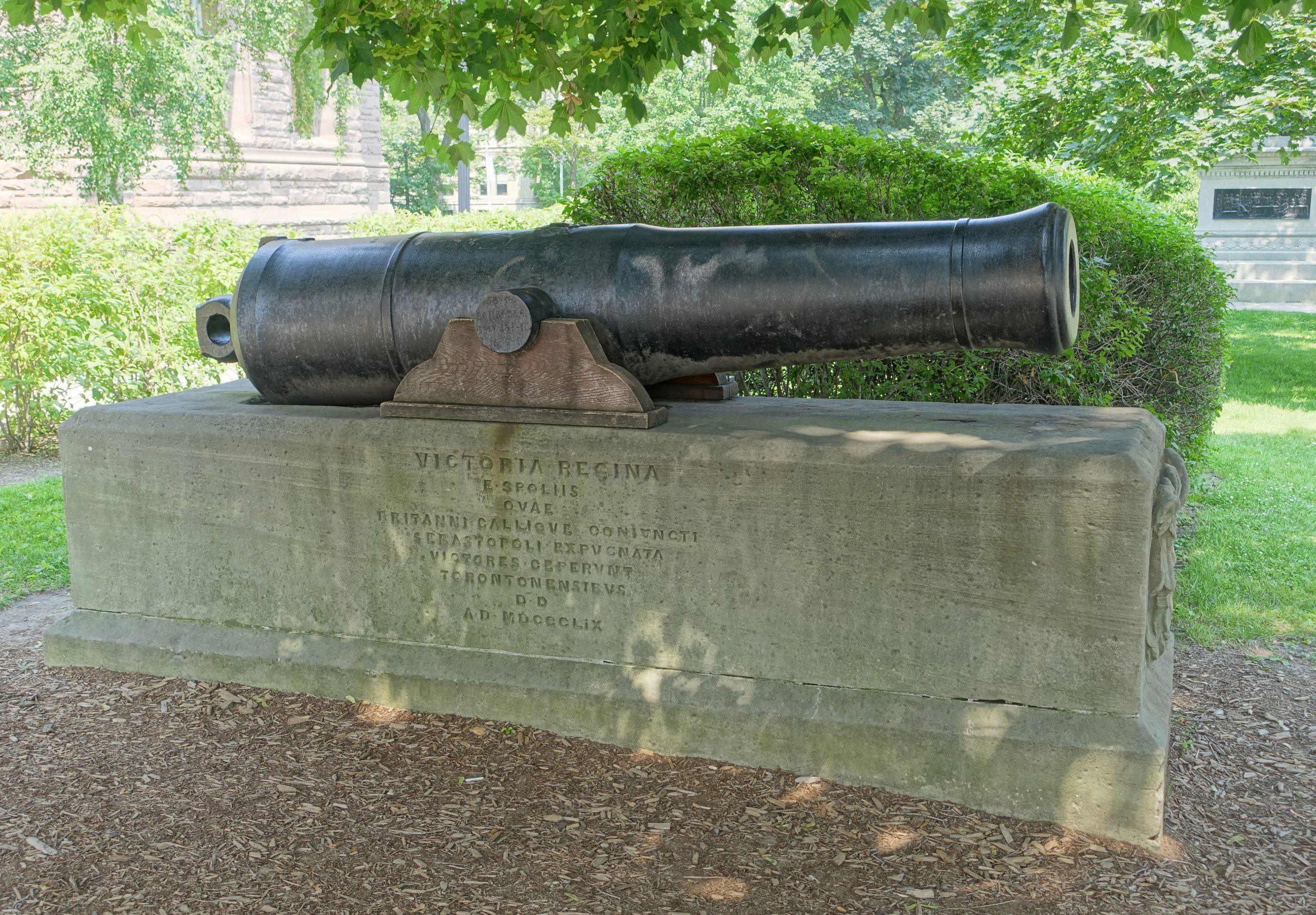 A cannon captured at Sevastopol forms a permanent memorial in Toronto.
Wikimedia
McDermond (1832-1868) was a Scot who joined his regiment at 14 years old. A painting in the Regimental Council Chamber of the Lancashire Infantry Museum shows the action where he earned his Victoria Cross.

With no thought for his own safety, McDermond reportedly killed a Russian who had wounded a British colonel. He remained in the army until he was “invalided out” due to an ankle injury. He later contracted typhus, after which his records are difficult to trace, especially since the name is relatively common.

Records indicate he was registered as a Chelsea pensioner in July 1862 and some accounts say he is buried in an unmarked pauper’s grave at Woodside Cemetery in Paisley in the west central lowlands of Scotland, an all-but-forgotten hero.

Byrne (1832-1879) was an Irishman with what Sumnall described as “a somewhat chequered past.” He joined the army at 17 and was “highly decorated with VC-worthy actions” at Inkerman and Sevastopol. In the action for which he received the VC, he returned under heavy fire to the front line after a retreat was ordered to rescue a wounded comrade.

He was, according to reports, tortured by what he saw long after he left the battlefield. His life ended in tragedy a quarter-century after the events of Inkerman due to what would likely be diagnosed today as post-traumatic stress disorder.

The Crimean War veteran worked himself into a fury after he or his medal—it’s unclear which—was mocked by colleague John Watts as they worked for an ordnance survey team. Byrne pulled out a revolver and shot the 18-year-old, wounding him in the arm. Hours later, surrounded by a large crowd and police, he turned the gun on himself.

The inquest that followed his suicide inside Newport’s Crown Inn in July 1879 was told that he had probably imagined the insult. Watts testified he had simply advised Byrne to put out his pipe while on parade to comply with orders from their commanding officer.

But Byrne’s landlady, Eliza Morgan, told the coroner he was furious at the remark, telling her: “I served my Queen and country for 21 years and I’ll never be insulted by a curr puppy.” 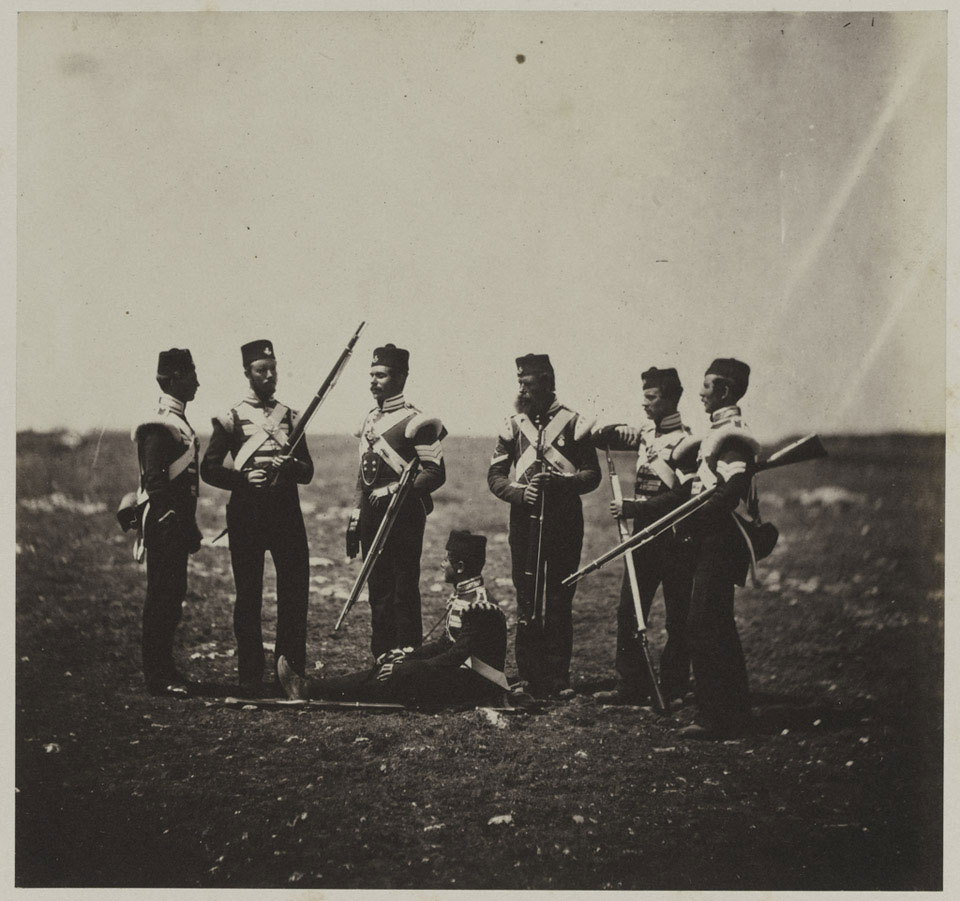 Men of the 68th (Durham) Regiment of Foot (Light Infantry) in Crimea in 1855. The soldiers are wearing cross belts; as the war continued, a more comfortable waist belt was issued.
Roger Fenton/The National Army Museum/127764
A few hours after shooting Watts, Byrne found himself holed up at the inn, where he told landlord Salter Davy that he had shot the youth by accident. Davy tried to persuade Byrne to give himself up but, confronted by police, Byrne took his gun, put the barrel into his mouth, and pulled the trigger.

Byrne had said he lost his medal in a fire. It is now believed his troubled state of mind may explain how his VC, today worth in the neighbourhood of $100,000, could have ended up in the Thames mud.

Its finder, Neto of Putney, southwest of London, is convinced that Byrne threw the medal in the Thames “in a fit of regret and despair.”

Byrne had said he lost his medal in a fire.

On a 2017 visit to Byrne’s grave at the Saint Woolos Cemetery in Newport, Wales, Neto said Byrne has been “from Day 1, my No. 1 suspect and that was the main reason of my visit. I’ve always thought the medal belonged to him.”

Said Sumnall: “This was by all measures an incredible discovery. We may never establish with certainty to whom it belonged, but the stories that lie behind this medal are truly fascinating.”

The artifact, now in London’s National Army Museum, is missing a key piece of evidence—its suspender bar, which bears the recipient’s name. If found, experts say it could double the medal’s value.

Neto is still searching the mud of the River Thames. 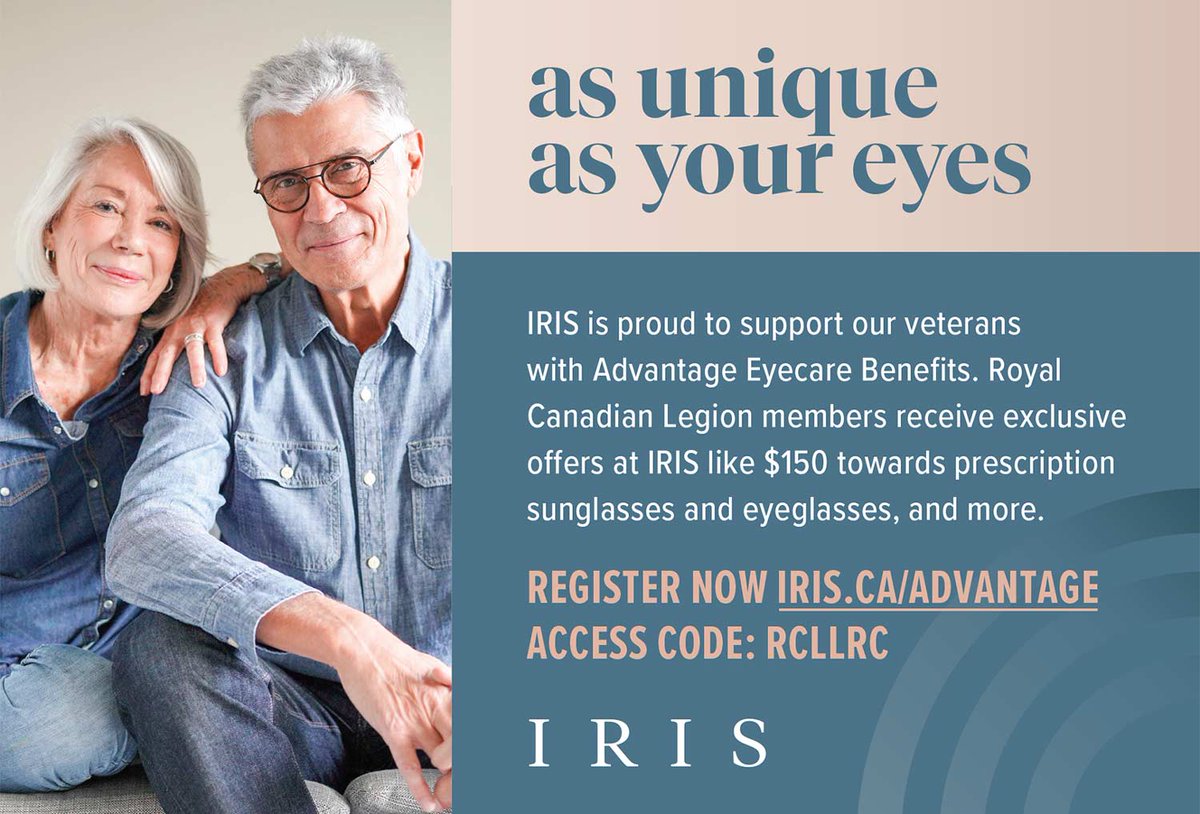