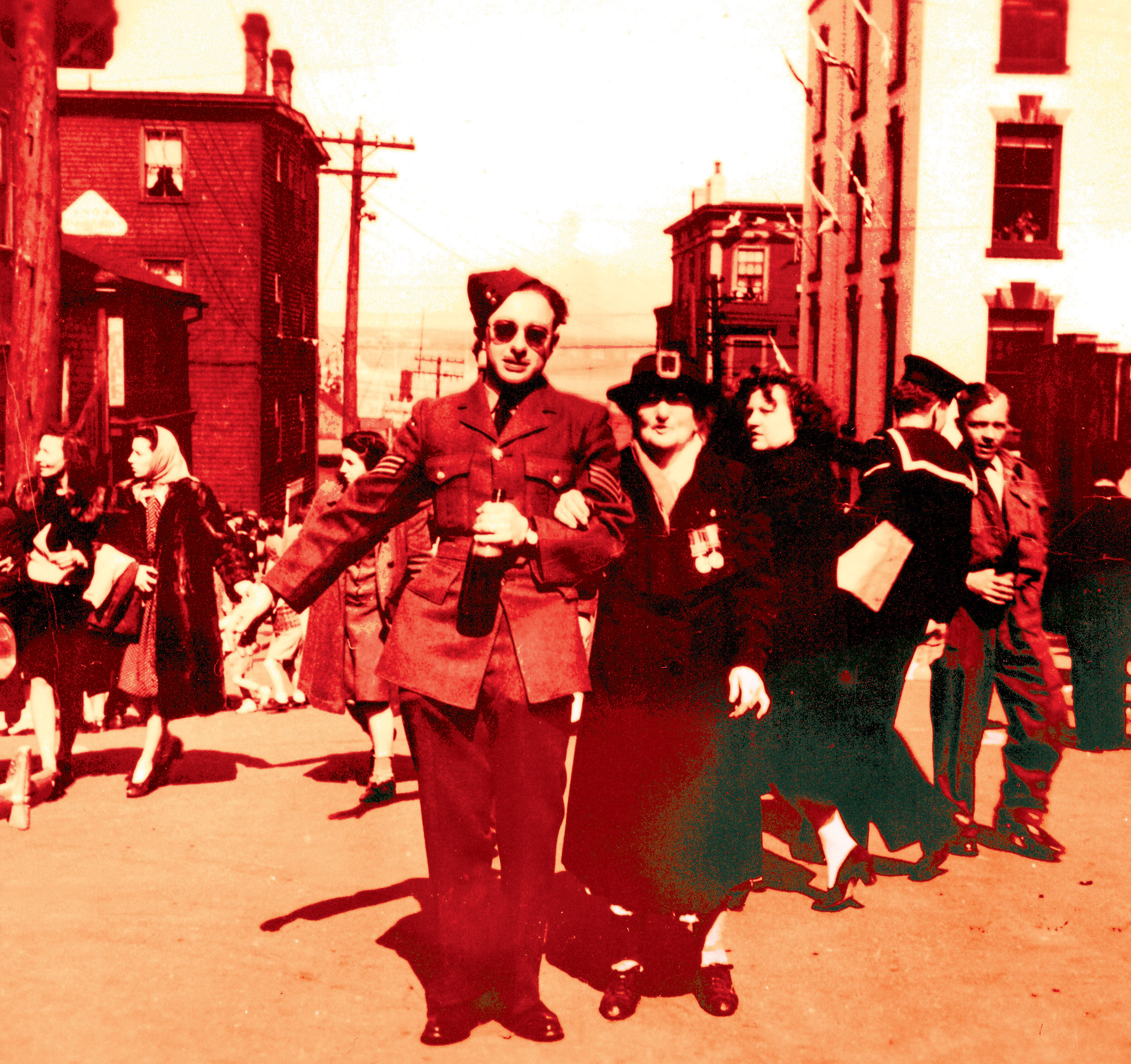 VE-Day revellers congregate on Salter Street between Hollis and Barrington in Halifax on May 8, 1945. Rioters smashed windows in more than 200 businesses and looting was widespread.
Nova Scotia Archives/N-1404

During the Second World War, Halifax quickly became overcrowded with tens of thousands of army, navy and air force personnel, as well as merchant seamen, civilian workers and their families. Newcomers competed with locals for goods, services and accommodation. All were in short supply through the war.

Devious landlords overcharged for the smallest of inferior living space, which usually had shared toilet, washing and cooking facilities—if there were any at all. Sailors and civilians alike were frustrated by the poor level and range of services in the port city.

“The city was just plain overcrowded,” said a Wren, one of nearly 1,000 Women’s Royal Canadian Naval Service members stationed in the Halifax area. “And it made for a lot of tension.”

As the end of the war approached, the senior naval commander in the city, Rear-Admiral Leonard Murray, directed his subordinates to make plans for the event. It was announced that everyone except those on essential duties could leave their barracks.

On VE-Day—May 8—the area’s 11 movie theatres were closed. Forty-six of 55 restaurants in the city were closed all day; most of the rest locked up by 4 p.m. All the liquor stores were closed.

Just when soldiers and sailors should have been able to celebrate their hard-earned victory over a brutal and tenacious enemy, there were no films to watch, no eateries open and no alcohol. It was a recipe for unrest. 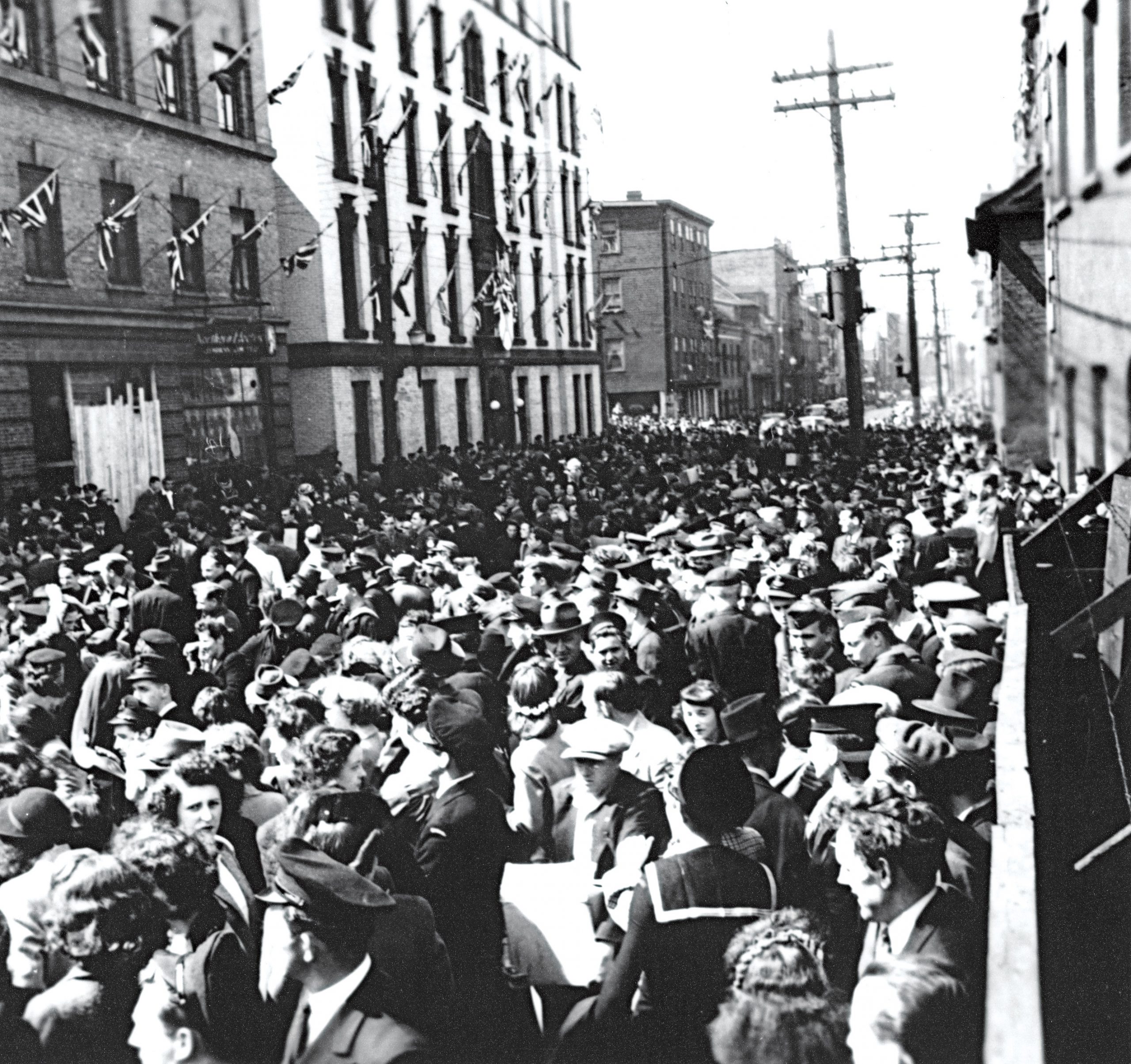 Increasingly disgruntled VE-Day celebrators crowd Hollis Street in Halifax. Alienation and frustration felt by those in uniform boiled over when the war ended.
Nova Scotia Archives/N-0638

News that the war was over leaked out prematurely early on May 7, and people headed into the streets to celebrate. Rowdy sailors in the city’s north end stopped a streetcar outside the naval base and smashed its windows. Almost 10,000 sailors, soon joined by several thousand civilians, raged through the downtown area of Barrington and Hollis streets—smashing shop windows and looting.

Liquor stores were the first target. One on Sackville Street was broken into first, followed by two more around midnight. By one o’clock in the morning, it was over. Police guarded the liquor stores while shore patrols rounded up sailors and returned them to barracks.

May 8 began quietly. Despite the signs of damage caused by his men, Murray did not cancel his earlier orders giving them the day off.

“If the civilians are allowed downtown to celebrate,” he said, “why not the navy?” The answer would soon be all too obvious.

At 1 p.m., the navy’s wet canteen ran out of beer. After smashing beer bottles, about 2,000 ratings spilled into Barrington Street and appropriated a streetcar. They expelled its operator and his passengers, broke the doors and seats, and headed downtown.

A large mob followed. As it moved southward, people broke windows in several houses along the way. Larger plate glass windows in stores including T. Eaton Company, People’s Credit Jewellers and Birks and Sons were next. Broken glass soon covered the streets and sidewalks. As the mob moved on to Keith’s Brewery, its followers stripped everything they could from shattered shopfronts.

Sometime that afternoon, the now-frenzied mob charged the Sackville Street liquor store, but was driven back by civilian and military police. At Keith’s Brewery, a mob of 4,000—mostly sailors—busted down its iron gate and stormed inside. When the owner, Colonel Sidney Oland, arrived, he entered the warehouse and helped his workers give each man a case of beer.

Meanwhile, the commanders of the navy, army and air force were at a memorial service. They were told of the liquor store looting at 3 p.m. and, a few minutes before 6 p.m., decided the “celebrations” would end at 6 with a curfew to follow at 8 p.m.

The riot was largely over by midnight, except for the shore patrol and sailors pressed into service collecting those who were passed out or too inebriated to make it back to barracks on their own. Drunken sailors were tossed into trucks.

Property losses in Halifax were estimated at $5 million. Nearly 2,650 panes of plate glass and other windows were broken, while a police car and a streetcar were set on fire and burned. Three people died and several hundred were injured, mostly from broken glass.

As expected, the navy received the lion’s share of the blame. 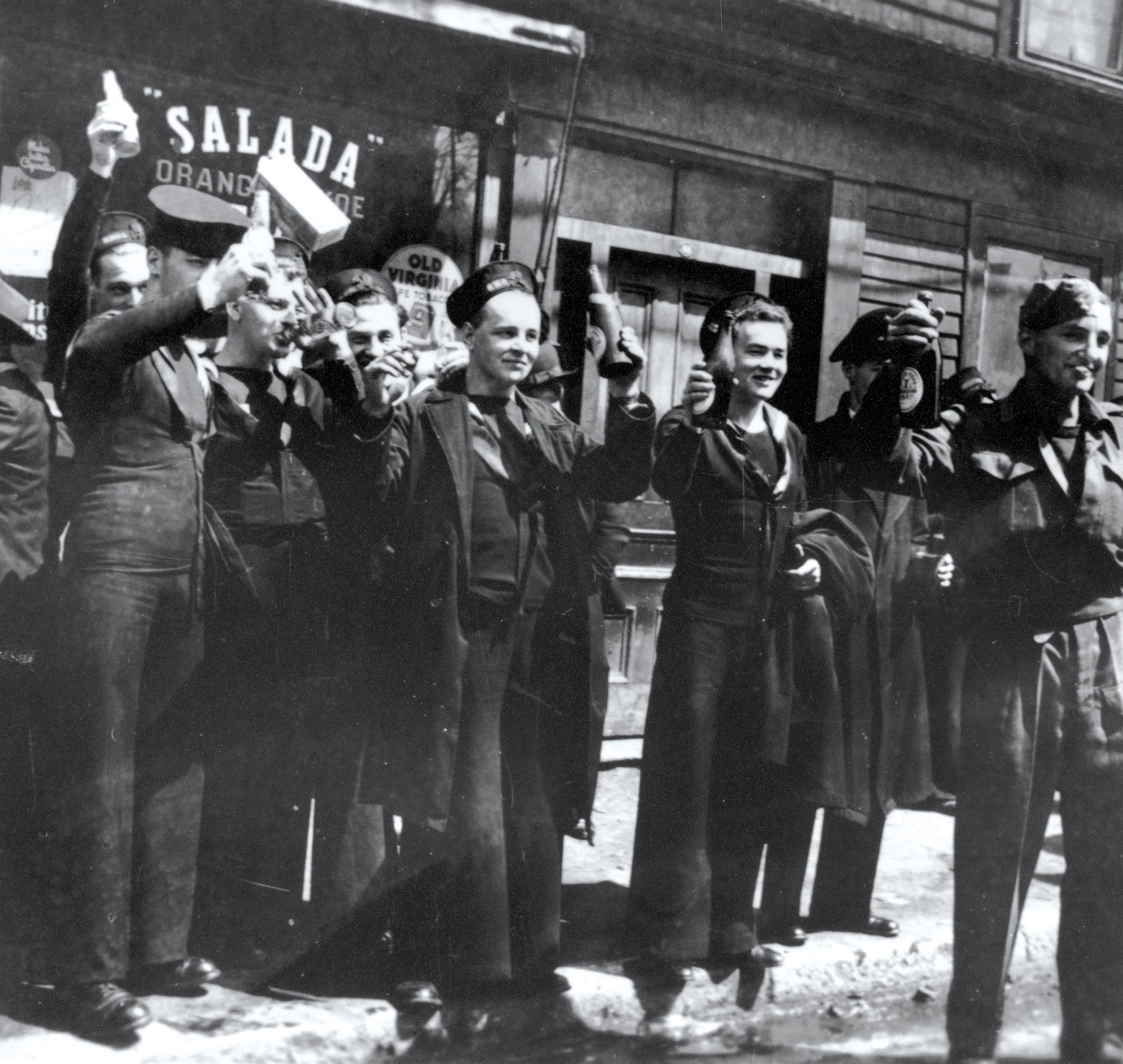 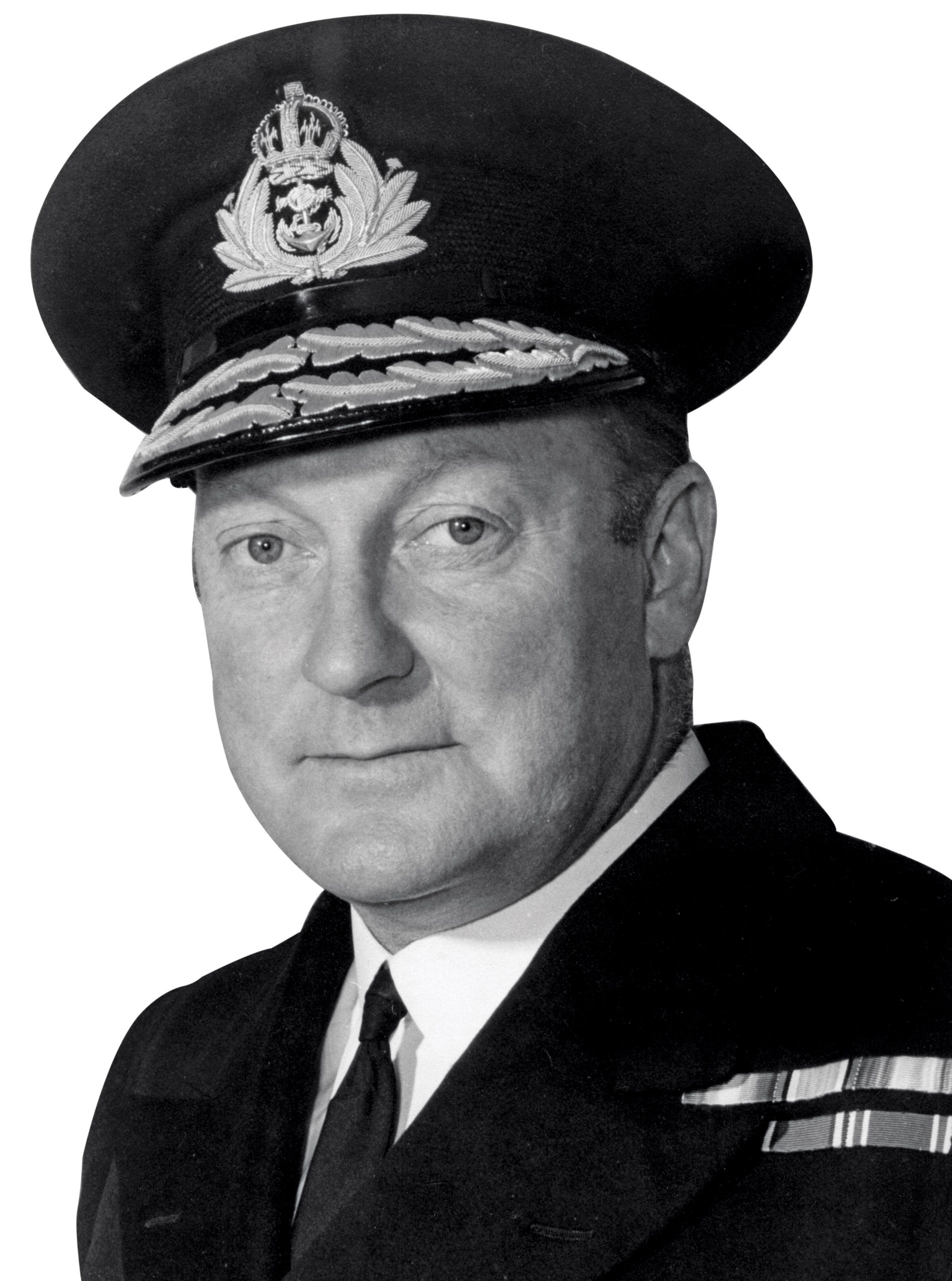 Despite signs of trouble the night before, Rear-Admiral Leonard Murray gave sailors the day off, saying they should be allowed to celebrate like everyone else.
Nova Scotia Archives/1981-412 10}

Murray resolutely believed most of his sailors were not guilty. “I am satisfied,” he said, “that, though service personnel were present during the whole afternoon, in almost all cases civilians led the assault and encouraged service personnel to take part.”

The federal government soon ordered a royal commission into the riots, headed by Supreme Court of Canada Justice Roy Kellock. He placed responsibility for the riots firmly on the navy. 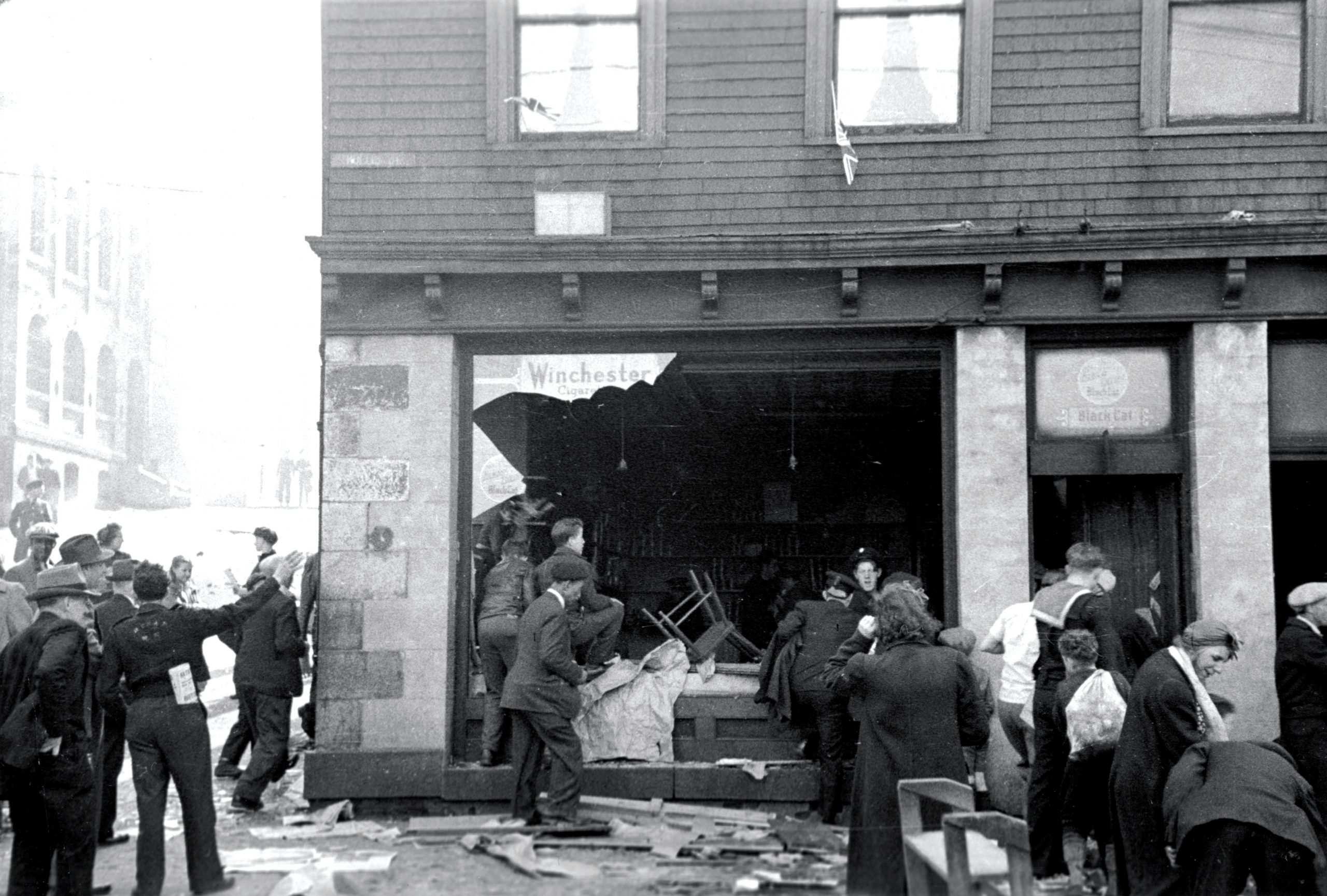 Servicemen and civilians, including children, loot a corner store during the riots.
Naval Museum of Halifax

“Once started,” read Kellock’s report, “the development and continuance of the disorders were due to the failure of the naval command to put down the initial disorders on each of the two days.”

Kellock pointedly disregarded other possible explanations for the disturbances, such as resentment because restaurants and theatres were closed or any underlying animosity by service personnel against Halifax due to overcrowding and other frustrations. He found that army and air personnel were controlled, while more than 9,000 sailors—out of 13,306—had left their units on May 7 and were joined by another 500 the next day. 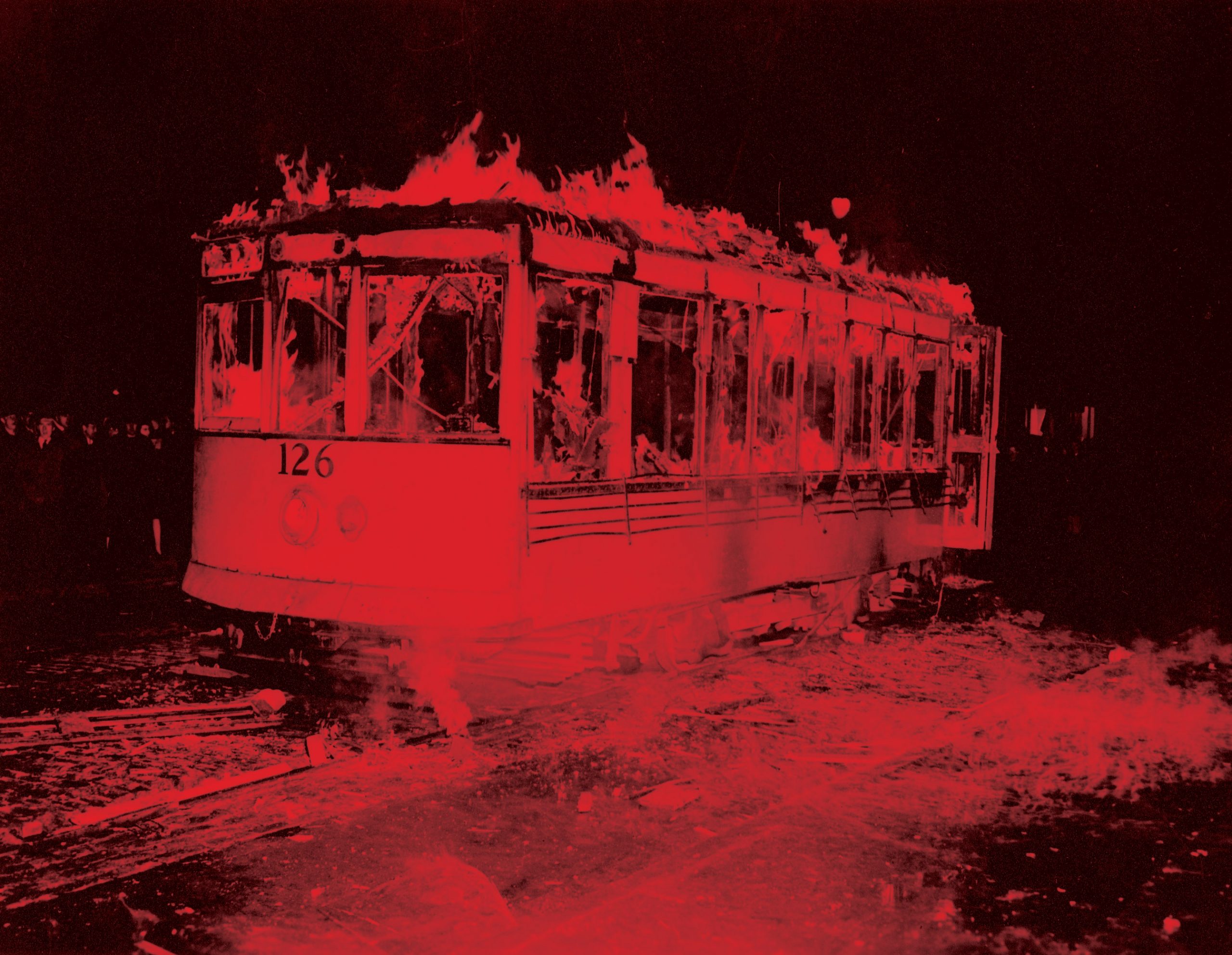 Sailors immobilized eight streetcars, then smashed the windows and set at least one on fire.
Naval Museum of Halifax

“It was not surprising,” said Kellock, “that these large numbers of naval personnel went into the city. There was no adequate program to hold them away.”

B.K. Sandwell, editor of the influential national weekly Saturday Night, formed his own opinion. He wrote that when war suddenly transformed Halifax into one of the great ports of the world, it did not adapt to the changes forced upon it and continued “to be a small port town, with a way of life and a set of by-laws, very much unlike those of the other great maritime municipalities.”

In particular, Sandwell criticized the highly regulated availability of alcohol, which could only be bought in government stores and then taken home to be consumed. This was totally impractical for service personnel living in barracks or aboard ships, he noted.

Despite the conclusions of the royal commission, the rest of the country blamed Haligonians for the riots, largely because of their treatment of sailors during the war. In the end, Murray was deemed responsible for exercising insufficient control over his sailors during the VE-Day riots. He resigned his command in September 1945, a resignation that was accepted with surprising speed. He retired officially from the Royal Canadian Navy on March 14, 1946.

Many believed Murray was a scapegoat, and that some of his subordinates were actually the ones at fault. His illustrious wartime career ended without him receiving the recognition he deserved for his role in the Battle of the Atlantic. Murray moved to Britain, qualified as a lawyer and lived there until his death in 1971. 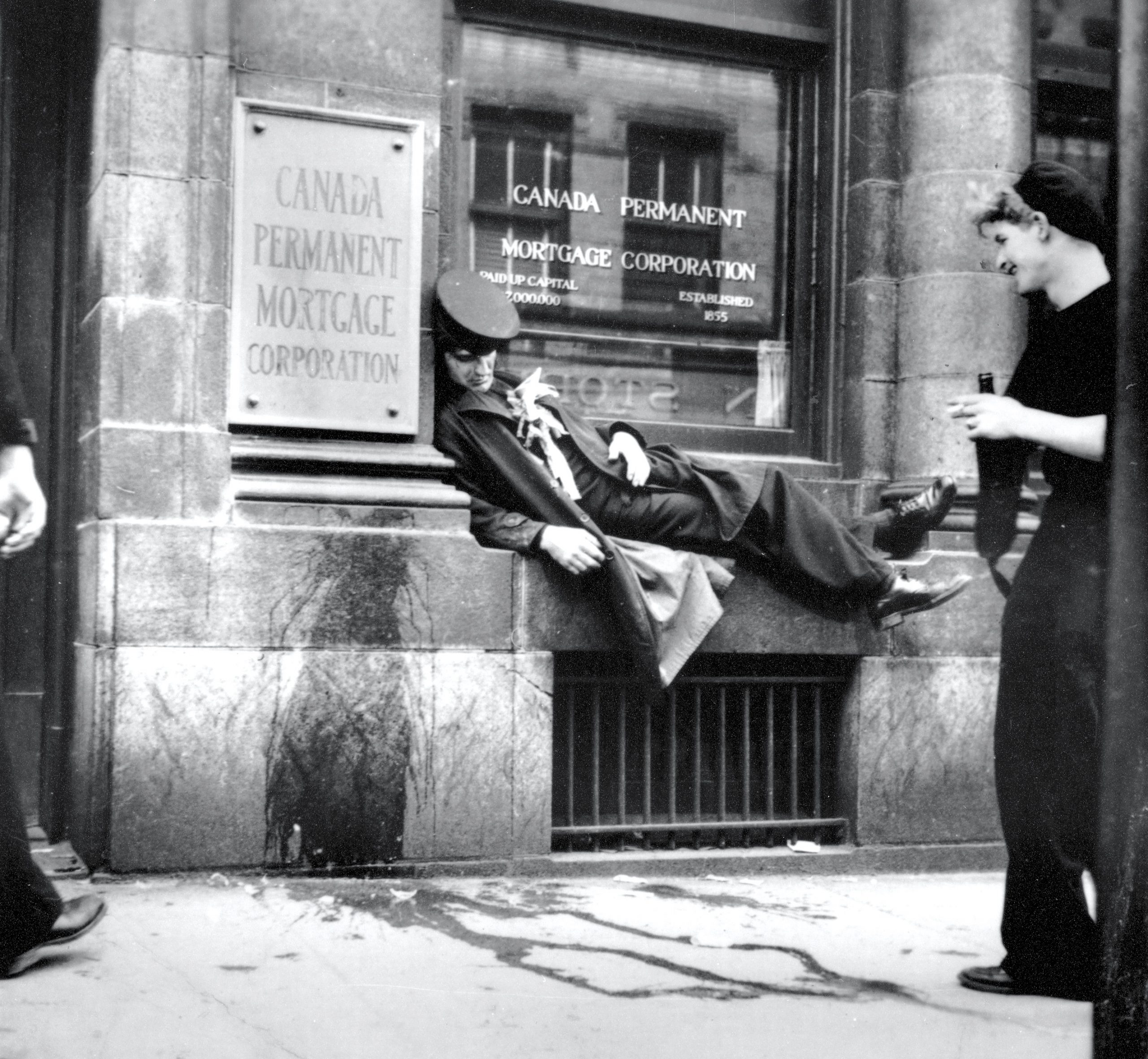 A sailor sleeps it off. An inquiry headed by Supreme Court Justice Roy Kellock disregarded the closures of bars and restaurants and blamed the navy for the disturbance.
Nova Scotia Archives/1981-412 9

PrevPrevious ArticleThey were prepared
Next ArticleThe last of the biplanesNext