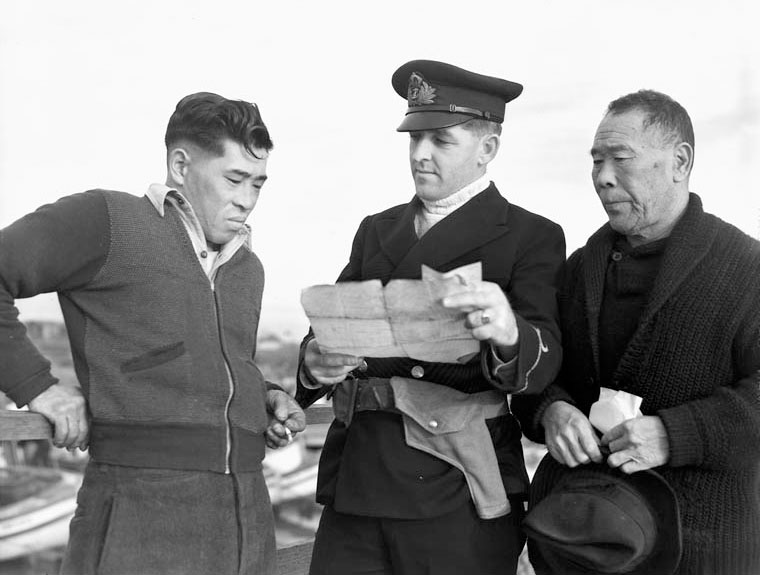 A Royal Canadian Navy officer questions Japanese-Canadian fishermen while confiscating their boat.
LAC/PA-A112539
On Jan. 7, 1942, a month to the day after the attack on Pearl Harbor, a wartime committee recommended to the Canadian government that Japanese-Canadians—even if second- or third- generation—not be allowed to volunteer for or be conscripted into the armed services, on grounds of strong public opinion against them.

It was among a series of moves that would end with so-called voluntary emigration to Japan or a move to internment camps for the duration of the war, their possessions confiscated and sold for a fraction of their worth.

When Japan became an ally of Germany and Italy in September 1940, it was feared British Columbia would be the target of a Japanese invasion, and that Japanese Canadians would collude with the enemy.  B.C.’s premier and attorney general demanded federal action to address those fears.

The day after the attack on Pearl Harbor, 1,200 fishing boats were impounded by the Japanese Fishing Vessel Disposal Committee, and a week later, all persons of Japanese ancestry were required to register with the Registrar of Enemy Aliens.

It might have ended there, but security was not the only motivation. Racism and greed also played a role. There had been wide-spread opposition to Asian immigration and citizenship for decades. And Caucasian farmers, fishers, merchants and labourers, who had long complained of competition for business and jobs from Asian immigrants, accused Japanese-Canadians of being spies and saboteurs, though RCMP investigations in the late 1930s provided no such evidence.

In mid-January, Prime Minister W.L. Mackenzie King ordered all adult males of Japanese ancestry be moved away from the West Coast. A month later, all people of Japanese ancestry were required to relocate more than 160 kilometres from the coast, most to internment camps. Some 21,000 were uprooted.

Any possessions that could not be carried were taken into government custody, including homes, farms, businesses, cars and trucks. In 1943, this property was sold at a fraction of its value, and the proceeds used to pay for support of social assistance of those detained (and to deprive them of the incentive to return to the coast). In effect, Japanese-Canadians paid for their own incarceration.

The war may have removed the security threat, but not the racism. After the war, Japanese-Canadians were given a choice: relocate to Japan or east of the Rockies, though in August 1944 King said “It is a fact that no person of Japanese race born in Canada has been charged with any act of sabotage or disloyalty during the years of war.”

At the end of the war, the fight for rights for Japanese-Canadians gained momentum, but by 1947, when cabinet rescinded the deportation order, nearly 4,000 had been relocated to Japan. In 1948, the right to vote was restored to Japanese-Canadians, and in 1949, all restrictions on them were lifted. It took another 40 years for the government to apologize for denying them their civil and democratic rights.