Elmer Cole: “I don’t think we’ll make it back to the pub tonight”

Elmer Cole, 99, of Brandon drove a tank onto the beach at Dieppe, fighting for nine hours before he and his crew were captured. He spent three years in German prison camps.
Holly Caruk / CBC Licensing

Trooper Elmer Cole spent nine hours driving a Churchill tank at Dieppe on Aug. 19, 1942, trying to hold off German forces and find a way past the obstacles inland.

The stone beach was already littered with dead Canadians and disabled tanks from the King’s Own Calgary Regiment of the 1st Canadian Tank Brigade when the Saskatchewan farm boy drove ashore early that morning.

His crew fought their way onto the promenade along the beach, his gunner returning fire from wherever it came. By daybreak, however, Cole’s windshield had been hit and his periscope had been shot off. There was a gaping hole right above his head, through which he feared a German would drop a grenade.

As the morning passed, the situation went from bad to worse. Their prospects were dire. Cole’s co-driver, Tpr. J.D. White from Coleman, Alta., turned to him and said: “I don’t think we’ll make it back to the pub tonight.”

“It doesn’t matter,” Cole replied. “I haven’t got any money anyhow.”

The aim was to seize and briefly hold a major port, both to prove it was possible and gather intelligence. Withdrawing troops were to destroy coastal defences, port facilities and strategic buildings on the way out.

The operation was supposed to boost morale. Instead, it proved an unmitigated disaster, due largely to inadequate fire support and poor planning. The landings became bogged down on the stoney beach and within 10 hours, it was all over. 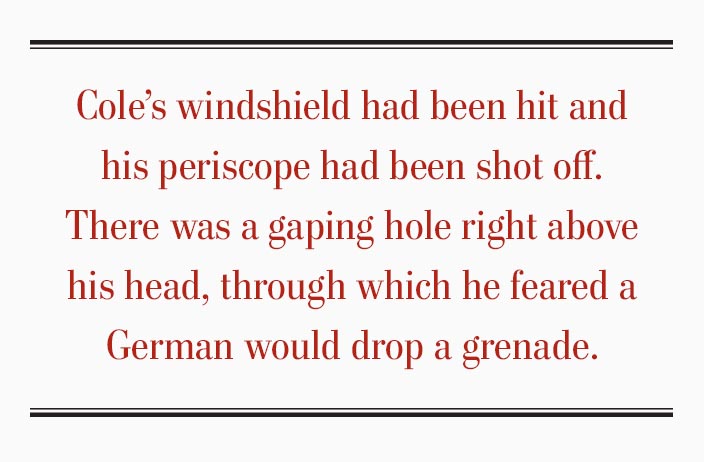 Cole, who turns 100 in December, had left school after Grade 8 to work on his father’s farm at Roche Percée, Sask., near the United States border about 20 kilometres east of Estevan, where he signed up.

“We had a picnic and four of us kids who had gone to school together decided we would join the army,” he related with acute recall. “I have no idea why. I guess we wanted action. That’s how come I joined the army.”

He trained as a mechanic and was eventually assigned as an instructor in Hamilton, Ont., but transferred out before he started when word came down that the Calgary regiment was looking for grease monkeys.

He shipped overseas early in the summer of 1941, landing in England where he spent much of the next year dodging air raids and wondering when and where the Germans would invade the British Isles.

The 40-ton Churchill was a good-handling tank. It wasn’t much for firepower, said Cole, but it was well-armoured. Its top speed was a woeful 20 miles an hour and it burned about three gallons of fuel to the mile, limiting its 150-gallon tank to about a 50-mile radius. (The Dieppe tanks carried extra fuel tanks.)

The day of the raid broke sunny and hot. Cole’s ‘B’ Squadron assault craft was hit by fire on the way in, killing its captain and forcing it to go around a second time before deploying its three tanks –BOB, BERT, and Cole’s BILL– onto the main beach at Dieppe, codenamed Red.

“We were late,” he said. “There were a lot of dead on the beach. Quite a few tanks broke tracks on the stones. They were the size of softballs, they were kind of rounded and they’d get under the tracks and break them.”

All three tanks in his troop made it ashore.

“We tried to get through the town but, of course, they had it all blocked off and we couldn’t get through.”

The tanks roamed the promenade during the morning and engaged German positions but could not penetrate the barricades.

Combat engineers were pinned down by heavy fire on the beach, unable to clear the way. Planners had grossly underestimated the German defences. 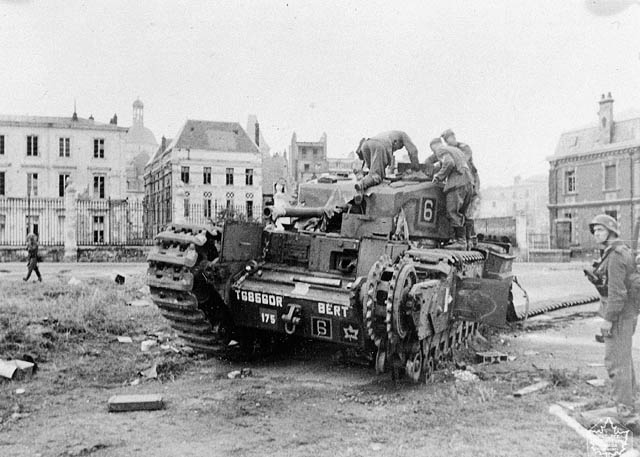 German troops swarm over Cole’s fire team partner, BERT, in Dieppe after the surrender.
Library and Archives Canada. MIKAN No. 3194753
“We just drove around on the promenade and kept the German army at bay so they couldn’t come on the beach. The gunner would see where a shot was fired from and he would fire back.”

His three-by-four-inch windshield was hit. The Churchill had spares, so Cole closed the steel cover and switched out the inch-thick bulletproof glass, enabling him to continue navigating the wide strip of promenade behind the beach.

They were “quite casual” about it all, he said. “Sitting behind the armour, I guess, we felt a little more secure.”

Eventually, the order came to withdraw onto the beach and form a ring of steel to help protect the evacuating infantry. Many of the tank crews exhausted their ammunition before they were ordered to surrender and taken prisoner.

The Calgary tanks suffered heavy casualties: only two members of the onshore crews managed to escape. Thirteen were killed in action, four wounded, and 157 captured. The commanding officer, Lieutenant-Colonel Johnny G. Andrews, was killed in action attempting to go ashore to reinforce the landing.

“The tanks, we were the last to leave,” said Cole. “We knew we would be taken prisoner. We weren’t scared of the Germans. We were no longer the boss.”

It was about 1 p.m. The Germans and their Canadian prisoners together carried dead and wounded off the beach, depositing the wounded in a Catholic church in the town.

“They didn’t holler at us or anything,” said Cole. “They treated us real good. They were the regular army, not the SS. They were fighting the same as we were. 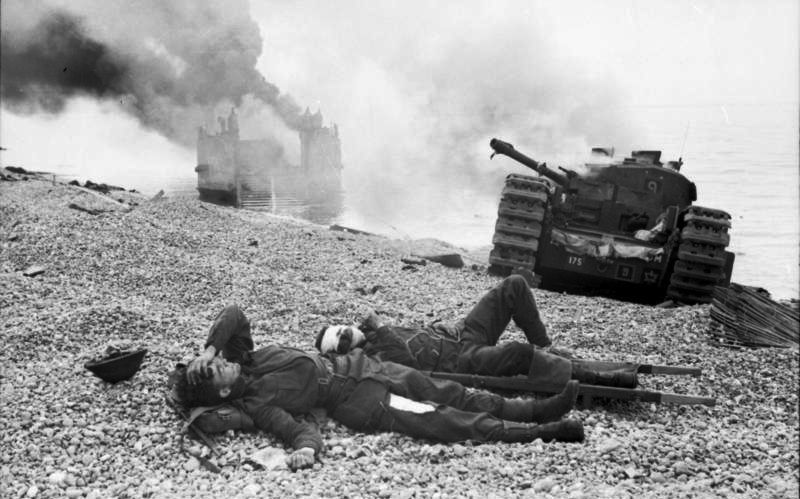 Canadian wounded and abandoned Churchill tanks at Dieppe after the raid. A landing craft is on fire in the background.

“The worst part was when we were put in boxcars to take us to a prisoner-of-war camp. We were about 50 in a boxcar. We really couldn’t all lay down at once and they had a 20- or 25-gallon urine pail, and that’d get full and splash all over. It was pretty demoralizing. That was our worst trip. It was about 10 days,” said Cole.

They were fed bread and mint tea. In the camps, they got turnip soup. Most got sick of it pretty fast; Cole had eaten a lot of it on the farm in the 1930s and he still likes turnip soup to this day.

They arrived at Camp 8B in Dusseldorf, Germany, where their clothes were fumigated and they were given the only baths of their three-year captivity.

“But, you know, we’d wash ourselves down and I always said I never smelled anything—well, maybe we all smelled the same. But we’d wash and we kept respectable. I guess it was the army training that done that.”

They were chained or tied up for 13 months, a reprisal for the binding of German prisoners by troops of the South Saskatchewan Regiment on Green Beach at Pourville, about two miles southwest of Dieppe. 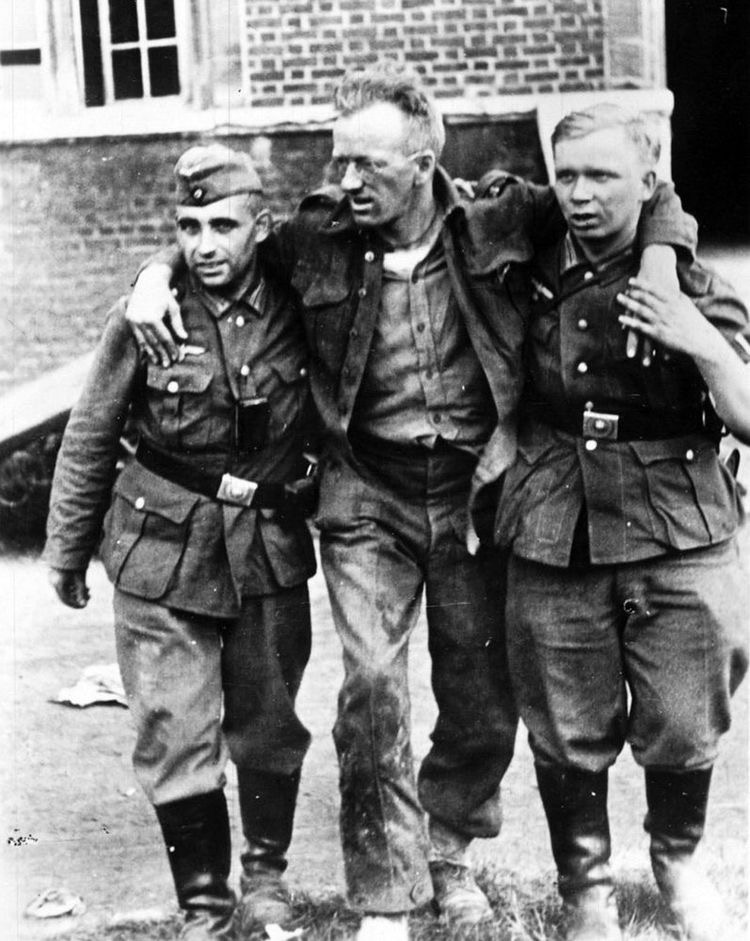 In spite of the discomfort and overcrowding—about 13,000 prisoners of various nationalities—the camp was good. The PoWs would make blowers for their cooking fires out of bully beef tins; one of the German guards took great pleasure in jumping on them regularly. “We had lots of time; we’d just make another one.”

“They were all home guards—old guys,” said Cole. “They never mistreated us, as far as I could tell.”

The Red Cross told the Germans the camp was too big, so Cole and others were transferred to Stalag II-D near Stettin, in northeastern Germany.

They received occasional Red Cross packages, sometimes sharing them between two prisoners, usually not more than one sitting’s worth of food—cans of bully beef, klim (powdered milk), evaporated milk, along with soda biscuits and tea or coffee. On rare occasions, they got cigarettes.

Cole smoked a pipe, but there was no tobacco so he smoked dried grass: “I always said I was the guy who started smoking weed.”

“I never heard of anyone stealing anything from another guy. Why somebody wasn’t light-fingered enough to steal from somebody else with everything out in the open, it was remarkable.”

They were able to write home—one postcard a month and one letter every two months. They would hear from home, too, sometimes receiving care packages with cigarettes. 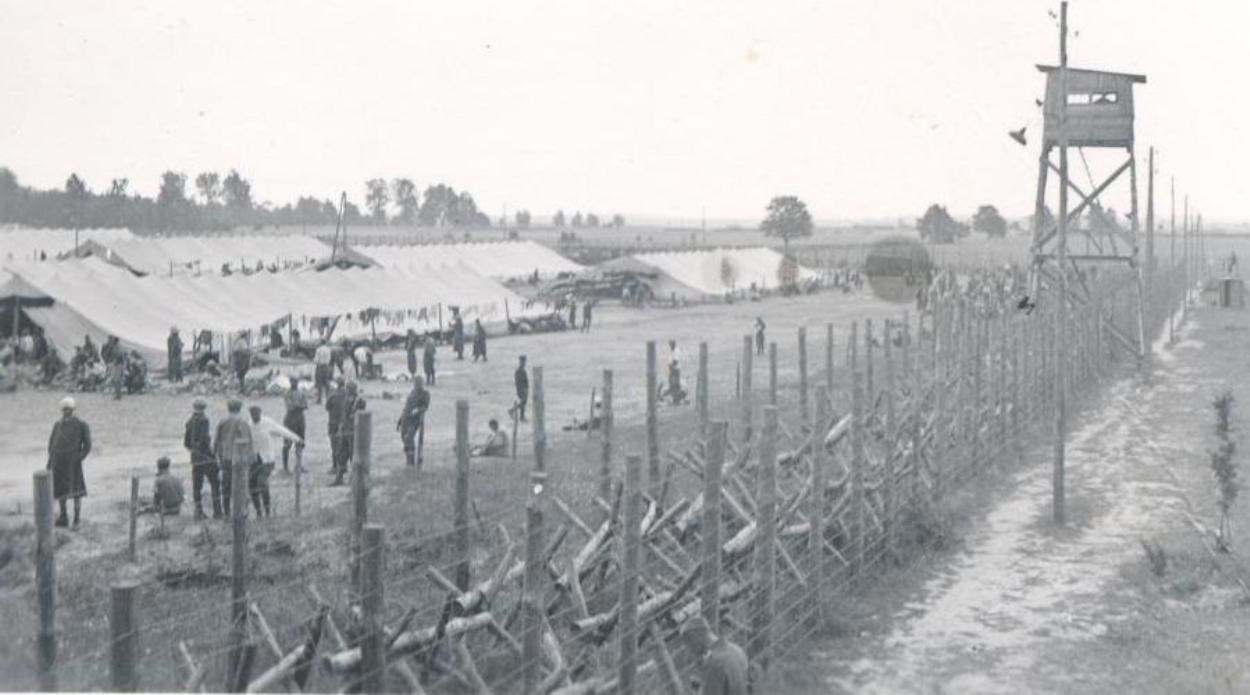 Stalag II D Stargard, near Stettin in northeastern Germany. Cole was moved here after the Red Cross said his previous camp was overcrowded.

“When the war was near the end in January ’45, we could hear the Russian and German gunfire in the early mornings.”

The camp was evacuated and they were force-marched for 36 days, living off the land. “We’d stop for dinner and we’d light a little fire. There might be a farm there that raised rabbits and we’d have rabbit stew. The one farmer complained to the officer that we’d stolen some rabbits and the officer said ‘they’ve got to eat.’”

One German farmer had been a PoW in Canada; he told local villagers at one stopover that he had been treated well. The next morning, the villagers served the Canadians rolled oats and milk for breakfast.

They ended up in a small camp near Bremen. 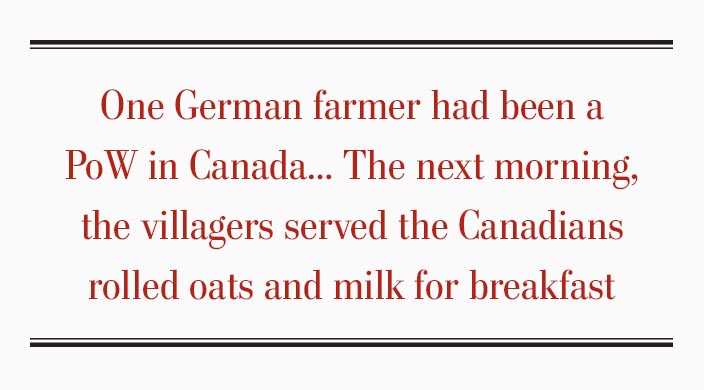 “The Germans knew the English were coming,” he said. “They told us ‘don’t leave the huts’ and they disappeared. The next morning, the British were there, and the Red Cross were right there with them. They were well-organized.

They were flown back to England aboard bombers. Cole was diagnosed with tuberculosis. The doctor told him he wasn’t going to die but that he would have to stay away from dust and he would not be able to exert himself. Farming was out of the question.

He had a sweetheart back in Brandon, Man., with whom he had corresponded throughout the war. He and Isabelle were going to marry but he had to get permission from the army. “Every time I’d move I’d say ‘as soon as we get settled I’ll get permission.’” The war was over and he still hadn’t gotten around to it.

After his diagnosis, he told her they couldn’t get married, that he would have no way to support them. “She said ‘don’t worry, we’ll make it.’ I said ‘I’ll do what I wanna do and if it kills me, so what.’”

“We had a wonderful life,” he said. “We farmed. And when we moved to the farm, she said ‘I’m not going to feed a hired man; I’ll be your hired man.’ So her and I worked together all the time.

“If we had a little disagreement, she used to say ‘you think what you think and I’ll think what I think.’ So that’d be the end of it.”

They had two adopted sons, Keith and Elgin. Both died years ago. Isabelle died in 2007. They had been married 60 years. Cole was diagnosed with lung cancer in December. Doctors gave him a month. He is still going strong.

“I’m still livin’. I have no pain. And I still bake my own bread. You have to live with whatever fate hands you.”

Two of Cole’s four brothers enlisted, one in the navy, the other the army. Both survived the war and lived well into their 90s. Cole said he would not trade his wartime experience for anything, “but I wouldn’t want to go through it again.”

“I have no regrets.”

PrevPrevious ArticleAttacked from above
Next ArticleThe sinking of HMCS Esquimalt Next