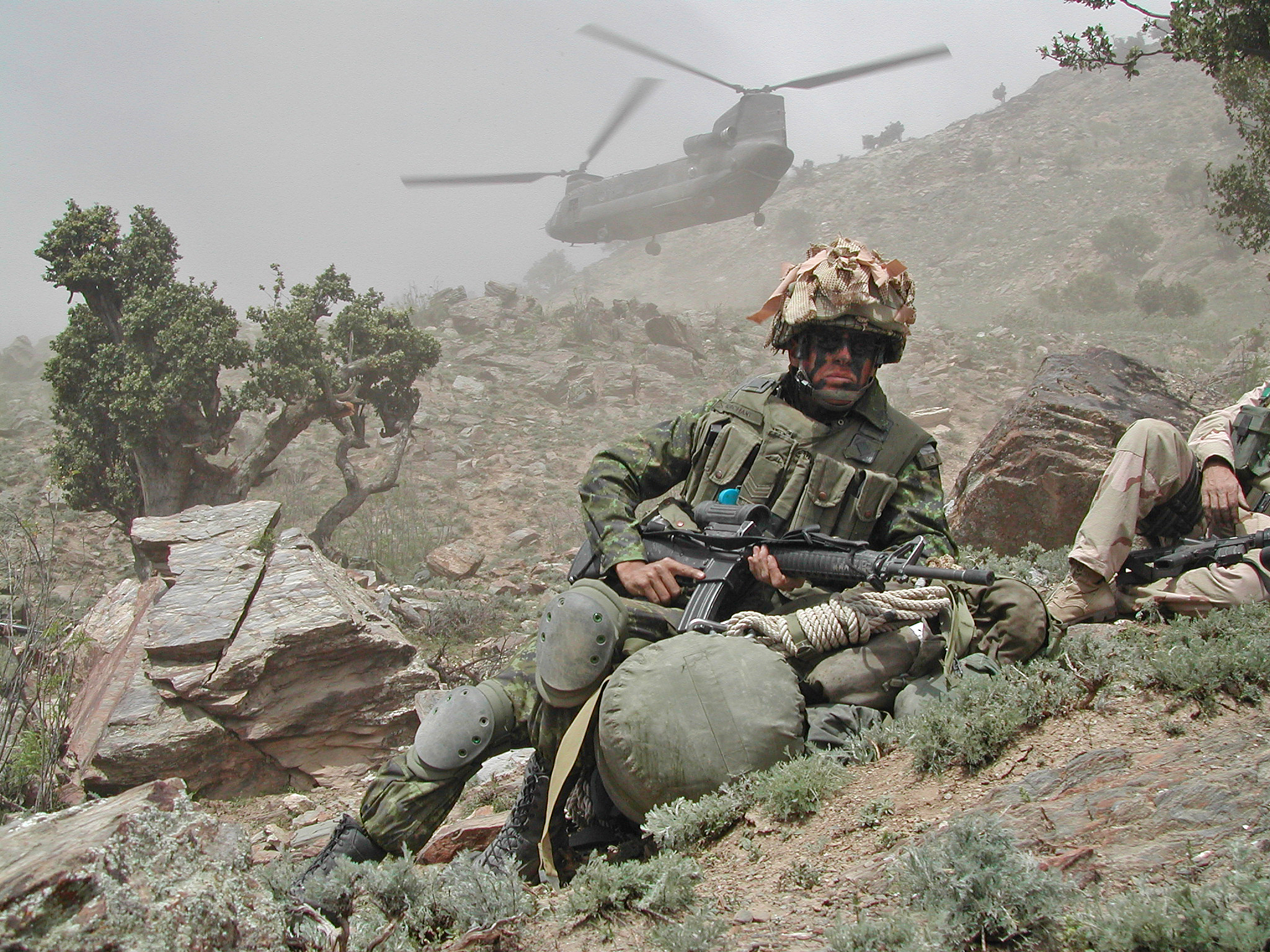 May 2002, a member of 3rd Battalion, Princess Patricia’s Canadian Light Infantry, sits atop his pack after disembarking from a U.S. Chinook helicopter in Tora Bora in eastern Afghanistan.
Stephen J. Thorne/The Canadian Press

Click here to read Part 1 of this two-part series.

In March 2002, on a mountain near the Afghanistan-Pakistan border known as the Whale’s Back, a company from the vaunted U.S. 10th Mountain Division joined 400 Canadian troops and a handful of U.S. Navy Seals on an assault to clear enemy positions, bunkers and suspected cave complexes.

The undulating rock overlooked a valley through which Taliban and al-Qaida fighters were escaping into mountain passes that led them to safety in Pakistan’s hinterlands a few kilometres away.

For 26 days, American forces supported by Canadian snipers had fought to stem the tide—and The Whale, as it was called, had been a nuisance. From its heights, the enemy launched deadly mortar and machine-gun attacks while marine Cobra attack helicopters and B-52 and F-16 strikes did their devastating work.

Now, during what was essentially a clean-up operation, members of 3rd Battalion, Princess Patricia’s Canadian Light Infantry (3PPCLI), launched Canada’s first combat assault in almost 50 years. Some 80 fighters from across Persia, the Middle East and Chechnya were believed to be waiting for them among the mountain’s rocks and caves, ready to fight to the death, according to intelligence reports at the time.

It could have been the 10th Mountain’s Waterloo, not so much for the enemy they faced as the baggage they carried, both literal and metaphorical. 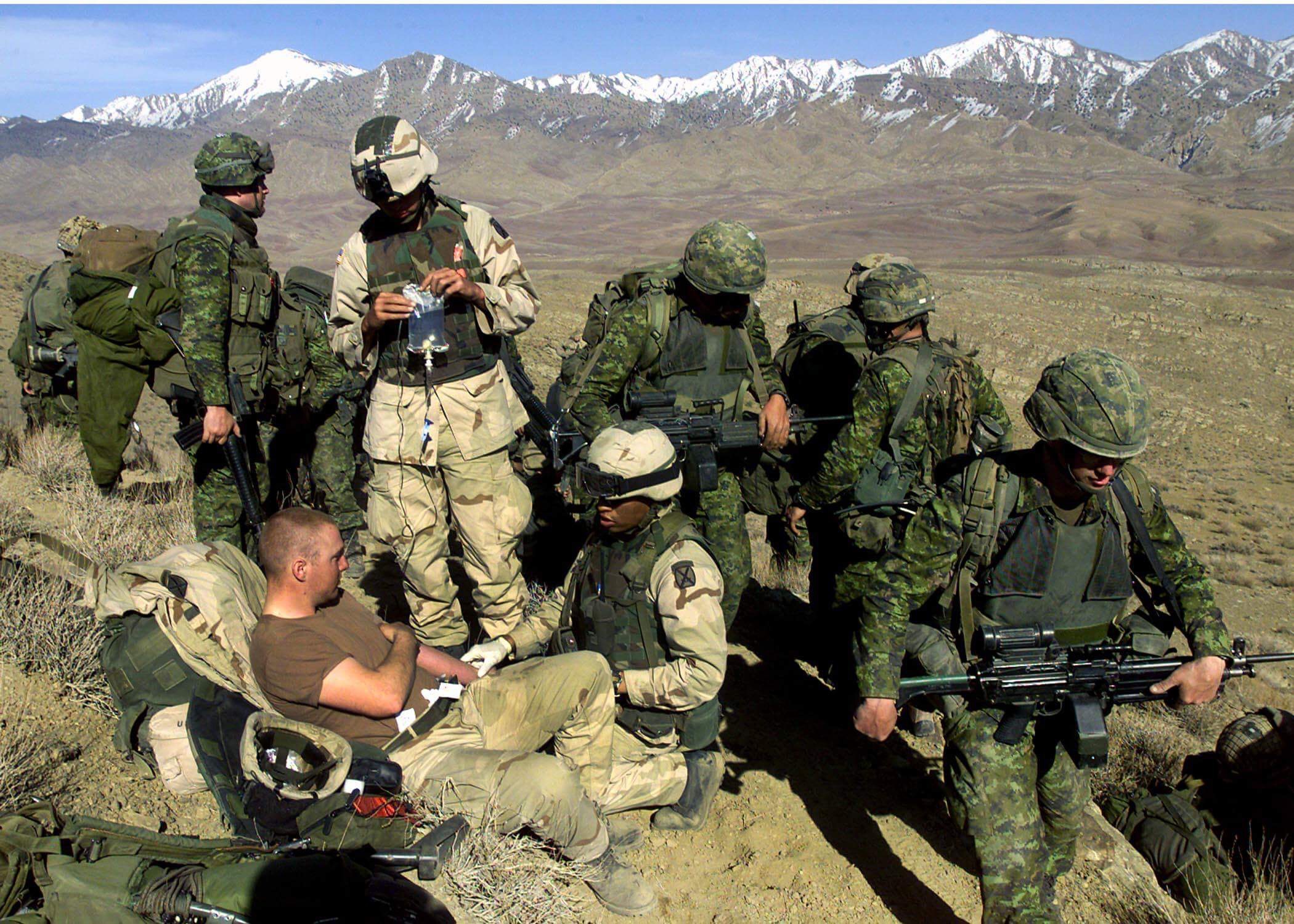 Surrounded by Canadian troops, colleagues administer an IV to a member of the U.S. 10th Mountain Division on the Whale’s Back in eastern Afghanistan in March 2002. The 10th Mountain soldiers suffered oxygen deprivation, dehydration and altitude sickness at elevation after spending three months at sea level in Kuwait.
Cpl. Lou Penney
The highly trained, heavily loaded mountain specialists out of Fort Drum in upstate New York had just spent three months at sea level in Kuwait. They were fresh to the battlefront when an American general decided that they should join the assault at nearly 3,000 metres. The order could have cost them their lives.

Senior Canadian officers described finding unguarded American kit—rucksacks, rations, helmets, etc.—strewn all along the ridgeline. Canadian medics were administering IVs to stricken Americans even as the operation was ramping up.

Nevertheless, the company—depleted as it was—still destroyed a bunker-and-cave complex at The Whale’s southern tip with deadly efficiency, vectored in by Canadian reconnaissance troops, one of whom walked out to meet them, their flanks guarded by the already battle-hardened Canadian snipers. 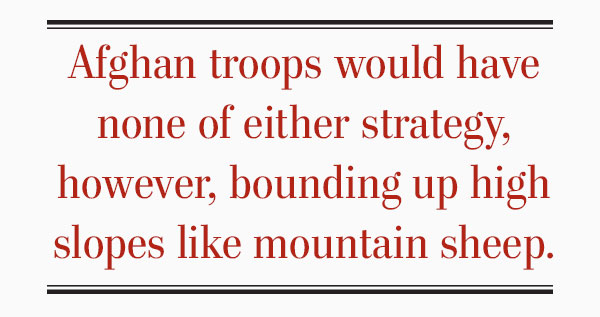 The experience illustrates virtually everything researcher Linda Bossi finds wrong with management of the burdens soldiers carry into battle: they tend to be ill-prepared, their challenges poorly considered, their loads largely disregarded.

“Few understand the health, injury, performance, or survival implications of every kilogram carried into battle,” Bossi and her colleagues wrote in the paper Rationalizing the Approach to Mitigate Soldier Physical Burden: Are Iron Man or Captain America the Magic Bullet?

It’s not limited to Americans. Advanced armies the world over, including Canada’s, are confronting the harsh realities of a relatively sudden onset of overload, brought on largely by technologies and the batteries that run them.

The Taliban referred to British soldiers as “donkeys” who moved in a tactical “waddle” because of the weights they carried in Afghanistan, which a senior British army officer said averaged 50 kilograms per person.

“Our infantry found it almost impossible to close with the enemy because the bad guys are twice as mobile,” he wrote.

“The amount of weight soldiers or marines are asked to carry has grown exponentially while their ability to carry that load has not,” King reported. “In the last 30 years…loads have skyrocketed.

“This overburdening has significantly hindered soldiers’ and marines’ ability to effectively maneuver on the battlefield.”

In spite of the evidence, stubborn militaries continue to do things the same old ways.

To the question she poses in her paper’s title, however, Bossi says no. Robots known as technological mules, small all-terrain vehicles and Ironman-style exoskeletons are being tested and may someday become high-tech contributors to easing the soldier’s load, she says, but they are far from the only solutions. 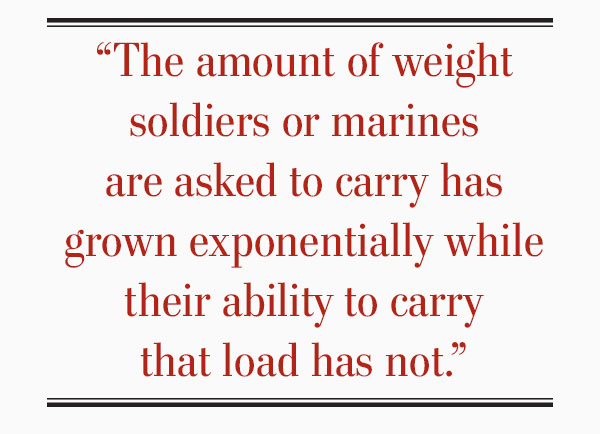 Addressing the problem of overload demands a more fundamental, incremental approach, she says. That begins by re-evaluating the whole system of placing arms, ammunition, armour, equipment, food and water on the backs of soldiers.

“There’s no way to know [it] but, in my heart of hearts, I believe that we could mitigate casualties if we reduced loads,” Bossi said in an interview with Legion Magazine. “Every kilogram costs you one to two per cent in your mobility and speed.

“Now we’re trying to characterize what that reduction means in terms of your probability of getting hit…. When you start talking casualties, people start paying attention.”

Bossi is a defence scientist specializing in ergonomics and human factors of soldiers’ systems. She’s been studying the physical burdens borne by soldiers since 1993 but her work has taken on new importance since the Canadian military’s 12-year experience in Afghanistan, where troops humped loads of up to 65 per cent of their body weight, far exceeding the recommended maximum.

Canadian military research has included forensic examinations of all war casualties to help determine the strengths, weaknesses and potential impairments of body armour and other equipment.

Scientists are also analyzing the speeds at which loaded versus unloaded soldiers can accelerate upon rising from prone positions.

The slower the acceleration, the longer you’re a stationary target.

The incremental solutions she foresees range from tendering and purchasing, where electronics could all be required to run on the same batteries instead of multiple ones with varying shapes, sizes and weights, to training, where the loads troops currently carry rarely reflect combat realities, to lighter and more modular equipment.

Bossi expects physiological monitoring systems to begin reflecting real-time stresses on soldiers in the field, allowing commanders to adapt on the fly and perhaps prevent situations like that faced by the 10th Mountain Division. 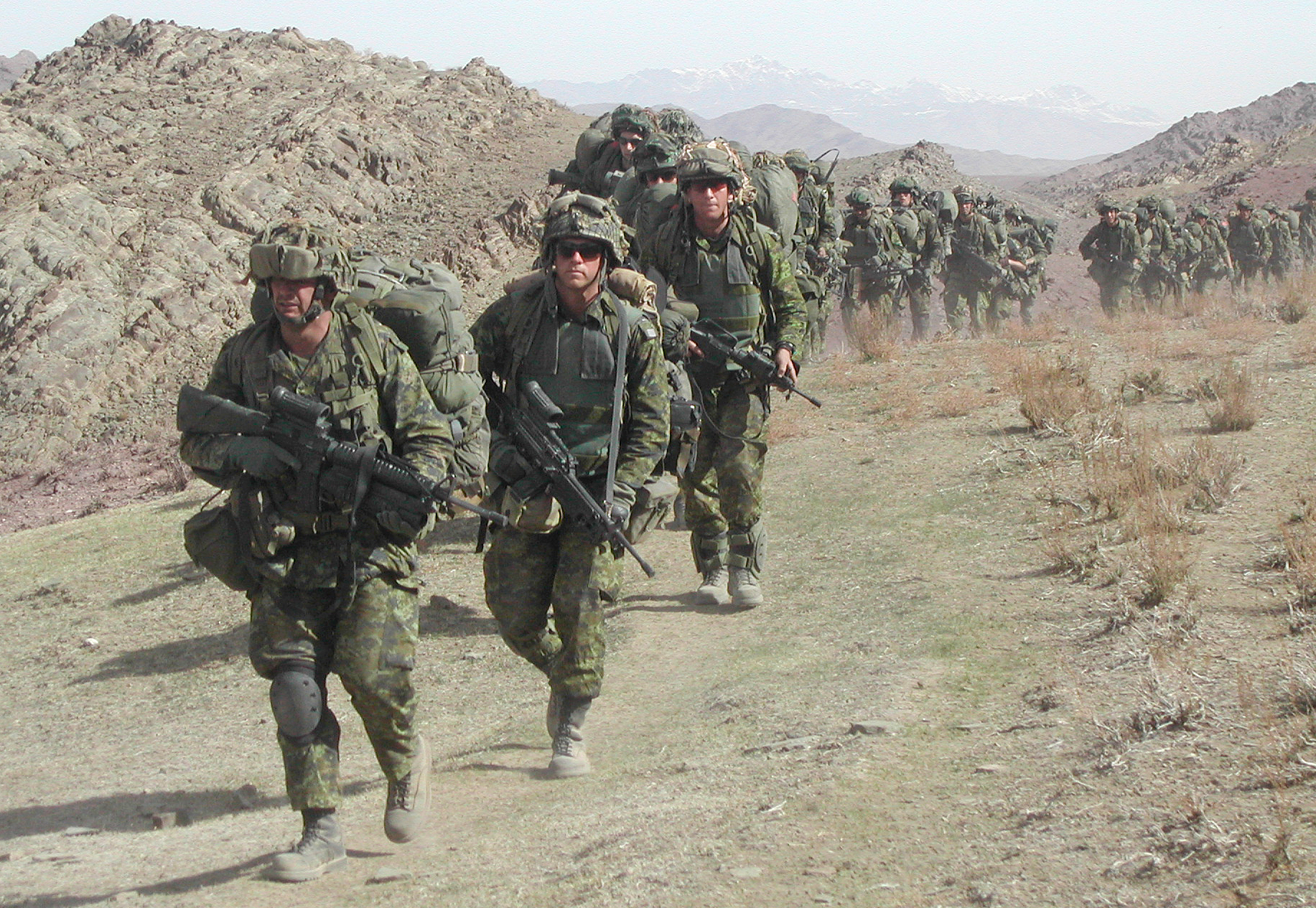 On the march in the mountains of eastern Afghanistan, members of 3rd Battalion, Princess Patricia’s Canadian Light Infantry, head to a landing zone at the end of Operation Harpoon on March 13, 2002.
Stephen J. Thorne/The Canadian Press
Other areas ripe for improvement include mission planning, which could better take into account temperature, distances travelled, terrain covered and loads carried, as well as reliable resupply, the lack of which—or, more commonly, lack of confidence in—causes many troops to overburden themselves with additional ammunition and other consumables.

The troops of 3PPCLI–mountain specialists in their own right–inspired a minor revolution among coalition forces, who mimicked their zigzagging ascents, designed to reduce the vertical push, and rest-steps, a climbing method that takes pressure off the quadriceps (thighs) and joints by pausing with the rear leg vertical and fully extended with the front leg relaxed.

The method puts weight on the skeleton and eases the burden on muscles generally. Its bouncing, rhythmically pausing pace creates its own kind of momentum and allows climbers to muster energy for the next step with limited stress.

Afghan troops would have none of either strategy, however, bounding up high slopes like mountain sheep. Their loads, it should be noted, constituted little more than a rifle and ammunition.

“There are a whole bunch of behavioural things we can do in terms of rest breaks, hydration; fitness is very important,” said Bossi whose paper is to be published in the coming book Transhumanizing War: Performance Enhancement and the Implications for Policy, Society and the Soldier.

“We’re going to have to make gains on all fronts, whether they’re fitness, equipment-related, having mission-specific load-planning, discipline, knowledge, education. And we need to do the research to demonstrate that.”

PrevPrevious ArticleRise in soldiers’ loads are a matter of life and death, says expert
Next ArticleMore angel than mortal: The nursing sisters of The Great WarNext