On Aug. 8, 1944, Sydney Radley-Walters was a newly minted 24-year-old major who had seen his first tank only two years earlier, when the Sherbrooke Fusiliers converted from infantry to armour. “Not one of us knew anything about armour or even what a tank looked like,” he said later. “We hadn’t a clue.”

Radley-Walters learned fast. On June 6, he came ashore commanding A Squadron and the next day he knocked out a Panzer IV—the first of 18 armoured vehicle kills that made him one of Canada’s top tank aces. Two months later, on Aug. 8, the Sherbrookes were in the thick of the action supporting 2nd Canadian Infantry Division during Operation Totalize—the attempt to break out from Caen to Falaise. At noon, the 12th SS Hitlerjügend (Hitler Youth) Panzer Division counterattacked the Canadians with a mixed armour and infantry force. At its head were five Tiger tanks. Weighing as much as 70 tonnes, with armour up to 10 centimetres thick and an 88-millimetre gun, the Tiger was Germany’s deadliest tank. 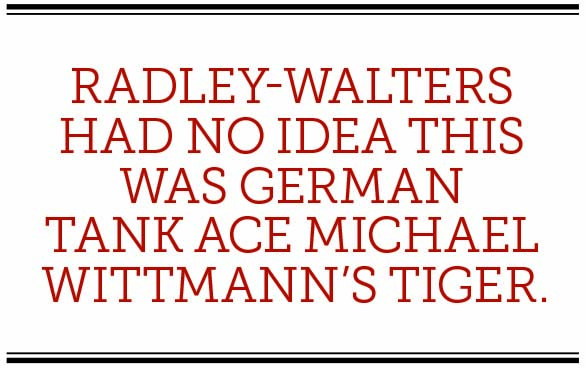 The German advance passed a château alongside the road next to a village called Gaumesnil. A Squadron was hiding behind the château’s high walls, through which its tankers had cut holes to create firing ports for their main guns. Radley-Walters had eight tanks. Two were the Sherman Firefly, whose new tank-penetrating 17-pounder (76.2-millimetre) guns were more powerful than the standard 75-millimetre Sherman guns.

Seeing the Tigers at the head of a column of Panzer IVs, half-tracks and self-propelled guns (SPGs), Radley-Walters yelled over the wireless, “Hold off! Hold off!” Finally, at just 500 metres, he gave the order to fire. The lead tank, closest to the château, took an instant hit and ceased moving. Radley-Walters targeted and destroyed an SPG just behind the Tigers. In mere minutes, the Sherbrookes also knocked out the Tiger at the rear of the leading five, two of the Panzer IVs and another SPG. The other three Tigers fell victim to fire from British tankers on the Canadian left flank and the counterattack collapsed.

A few minutes later, the Tiger closest to the château exploded and the turret bearing the identifying number 007 was blown off. Radley-Walters had no idea this was German tank ace Michael Wittmann’s Tiger. The action had started at 12:30 p.m. and lasted just 25 minutes.

Before war’s end, Radley-Walters had three tanks shot out from under him and was wounded twice. He ended the war a lieutenant-colonel decorated with a Military Cross and Distinguished Service Order. He retired from the army in 1974 with the rank of brigadier-general. Radley-Walters died on April 21, 2015, at age 95.

Hauptsturmführer (captain) Michael Wittmann was reportedly nervous and uncharacteristically
indecisive on the morning of Aug. 8. When Standartenführer (regiment leader) Kurt Meyer of the 12th SS Hitlerjügend Panzer Division ordered a counterattack, Wittmann need not have participated. But the designated tank commander was inexperienced and Wittmann said, “I must go with them, for [he] can scarcely cope.”

As Wittmann’s counterattacking force rolled toward battle, Meyer knew he was sending it into a “steely inferno.” Wittmann’s force consisted of seven Tigers, a company of Panzer IVs, a company of SPGs, and supporting infantry in half-tracks. Their goal was to strike the seam between the Canadians and the British 51st (Highland) Division to the left and drive deep in between.

By this time, the 30-year-old Wittmann had earned the nickname the “Black Baron” and held an Iron Cross along with numerous other medals. His status as Germany’s top Panzer ace had made him a minor celebrity at home. Since the invasion of Poland in 1939, Wittmann had amassed a stunning record of 143 Allied armoured vehicle kills in fighting on both the eastern and western fronts. On June 13, 1944, he had shocked the 7th British Armoured Division at Villers-Bocage, France, by destroying more than two dozen tanks and transports.

No radio log records exist regarding Wittmann’s advance on Aug. 8. But as his Tiger 007 ground past the château at Gaumesnil, evidence suggests that an armour-piercing round fired by one of the Sherbrooke’s Firefly tanks punched into the air inlet on the left side directly behind the turret. The tank immediately halted and no crew emerged. Some minutes later, the Tiger was rocked by a massive explosion that hurled its turret pin through the air to land right side up some distance from the main tank body. 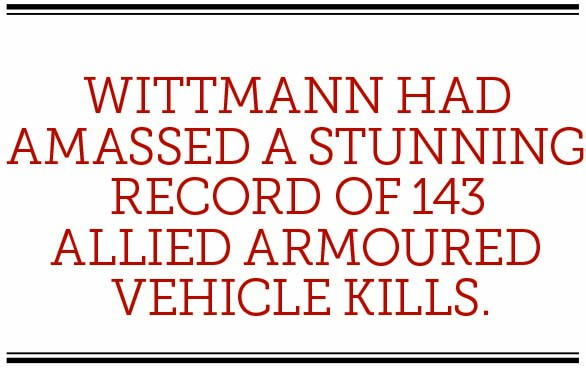 Wittmann and his crew of four were presumed killed, but their fate remained unconfirmed until 1983, when a road construction crew found their bodies. They were reinterred together at the La Cambe German war cemetery. In the aftermath of his death, there was much controversy about who really killed Wittmann. The British tankers of Northamptonshire Yeomanry’s A Squadron generally got the credit. It was also suggested that a RAF rocket-firing Typhoon made the kill, or even possibly some nearby Polish tankers. But none of these claims bore up against the fact that analysis of Tiger 007 showed the only penetrating wound in its massive armour was the hole in the left side air inlet. The only tanks having an angle of fire capable of delivering that fatal shot were those of A Squadron of the Sherbrooke Fusiliers.