Home » Military History » Face to Face » Should Remembrance Day be a statutory holiday?

Should Remembrance Day be a statutory holiday?

Both sides to this debate seek the same outcome: heightened awareness of, and greater public participation in, Canada’s annual Remembrance Day observances. The question hinges on the most effective means of achieving this goal. By enshrining Remembrance Day as a statutory holiday, on a par with Canada Day, the event would be nationally institutionalized, and the vast majority of Canadians would be available to participate in formal ceremonies and activities. Honouring the revered memory of those men and women who served and sacrificed, coupled with an expressed commitment to support those who continue to do so, would become ingrained as a unifying, national event.

The question of whether Remembrance Day should be a national holiday has vexed the country for nearly a century. Those opposed to any change often make the point that most Canadians would use their November 11 paid holiday for purposes other than observing Remembrance Day. It’s hard to know. But let’s have some faith in ourselves as Canadians. Given the necessary time off (though only if the 11th falls on a weekday—no automatic long weekends), and influenced by the elevation of that day to its new status, Canadians who do not at present take a few hours a year to mark the enormous and essential contributions of previous generations might seize the chance to do so. More importantly, those hundreds of thousands of working Canadians who deeply desire to participate in Remembrance Day ceremonies, often to lovingly mark the service of a relative or friend, but who are unable to participate when November 11 falls on a weekday, would now be given the opportunity.

The participation of school children in Remembrance Day activities is another key point.During Remembrance Week, most of Canada’s youth are exposed to themed activities in their schools, some of them innovative and powerful. Students watch historical films and documentaries, or express themselves through writing, poetry, painting and even theatre. The children assemble on November 11 to observe a moment of silence and listen to discussions about the importance of the day, sometimes with veterans present. Those opposed to upgrading Remembrance Day’s status feel that all of this would change if the schools were closed and the children stayed home, falling prey to various distractions—like computer games.

This ignores the fact that schools continue with their Remembrance Week activities even if the 11th falls on a weekend, at which time children are able to attend public ceremonies in their communities. With the benefit of a statutory holiday, thousands of dedicated educators would still teach the children about our military history and the importance of Remembrance Day, but would also be in a position to facilitate their attendance at, and even participation in, these events. This would promote the notion of participatory citizenship among our youth, and instill a sense of belonging to a wider Canadian family.

It’s not all bad, though. Remembrance Day is a national, paid holiday observed by the federal government and federally regulated institutions, and is a statutory holiday in six provinces and the three territories. But provinces are not required to recognize November 11 as a statutory holiday. Nova Scotia is partway there but Ontario, Quebec and Manitoba—combining for about two-thirds of Canadians—have stayed outside of this framework. Making Remembrance Day a mandated national holiday would raise the profile of our veterans (many of whom, of recent overseas service, are still young) and demonstrate a national commitment to recalling their sacrifices and those causes for which they served the nation. And it would remind Canadians of the debt owed to all of our veterans—past, present and future.

Remembrance Day, November 11, is a federal statutory holiday. This means that Canada’s public servants have the day off, alongside postmen and bank employees. All the provinces—except Manitoba, Ontario, Quebec and Nova Scotia—also make Remembrance Day a statutory holiday. In 2014-15, NDP Member of Parliament Dan Harris pressed forward a private member’s bill to make November 11 a Canada-wide holiday, but this effort failed. And so it should have.

Let’s be clear. November 11 is and should be the most solemn day on our calendar.

But what is the best way to honour our men and women in uniform? A holiday that lets Canadians take a day off work? Or a day that focuses the mind, that considers what was lost and gained in the battles Canadians fought against the Kaiser, the Nazis, the North Koreans, the Taliban, and, yes, the long Cold War against the Soviet Union?

I remember hearing a woman, clearly a recent immigrant, ask a work colleague why so many passersby had poppies on their breast. To remember the nation’s war dead, was the answer. That new Canadian will not forget. She may realize that she came to this country because of the values that the people of Canada fought to protect.

With a quarter-million immigrants and refugees arriving here each year, the opportunity to inculcate those values should be a national goal.

I have seen drivers pull over to the side of the road at 11:00 to observe the two minutes of silence. I have stopped walking on the street at 11 o’clock and stood with others in silence. In Toronto and Ottawa, the tolling of bells and the firing of the guns at one-minute intervals resonates in the sudden quiet. To me, that is much more moving than a one-day holiday could ever be. 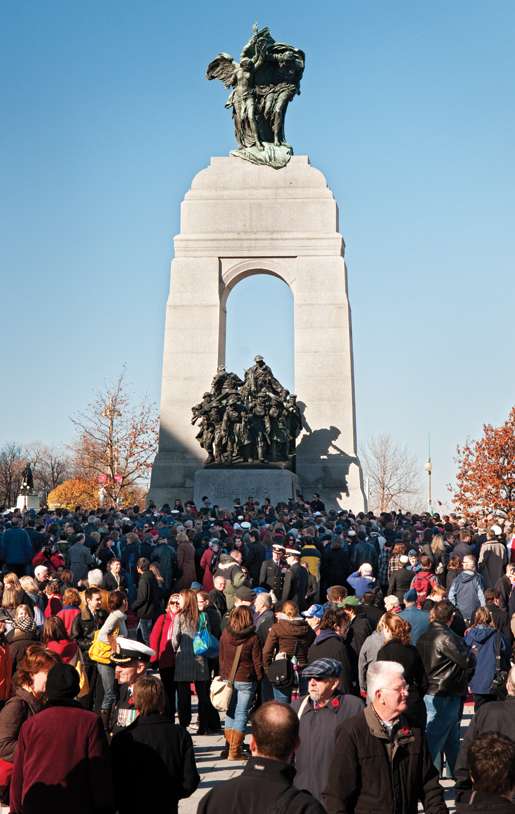 Remembrance Day has had a rebirth in the last two decades. The television coverage of the 50th anniversaries of D-Day and V-E Day created new interest in what our soldiers did in the Second World War, and the interment of the Unknown Soldier at the Tomb in Confederation Square in Ottawa renewed interest in the Great War. The opening of the new Canadian War Museum in Ottawa with its focus on the extraordinary deeds of ordinary men and women in the most dangerous of times reinforced this trend. So, too, did the spontaneous gatherings on the Highway of Heroes in Ontario every time a fallen soldier from Afghanistan was borne from Trenton to Toronto. Canadians do care. They do remember, and the ever-greater numbers at cenotaphs in Ottawa and across the nation each year make this evident.

But what do the schools do to make Remembrance Day an important teaching moment? Some do it well—having students research the lives of students from the 1930s who were killed in Normandy or Italy, which connects past and present very effectively. Other schools simply have a brief ceremony, with readings and a hymn. If it is perfunctory, it is a waste of the perfect opportunity for schools to encourage discussion and dialogue on what the day really signifies.

If Remembrance Day were to become a statutory holiday, schools might discard even the perfunctory observances many do now. Do we want November 11 to become a “happy holiday” such as Christmas or Easter? Far better to continue the traditions of poppies, two minutes of silence, and solemn crowds gathering at the cenotaph. Those are what make Remembrance Day truly meaningful, and November 11 can never be allowed to become merely another day off work.