Home » Defence Today » That Others May Live: In The Air With Canada’s Search And Rescue Technicians

That Others May Live: In The Air With Canada’s Search And Rescue Technicians 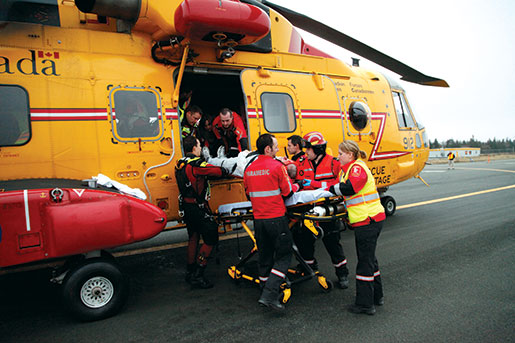 During the Sar Tech exercise in St. John’s, paramedics unload the injured from a Cormorant helicopter.
PHOTO: ADAM DAY

The world wants you dead. This is unfortunate, but it’s true, particularly in Canada, and especially in the North. Nature is cold and dark, the sea is deep and there are a million ways to die.

Lately, we Canadians have become proficient at insulating ourselves against the cruel reality of -35° C on a moonless night in mid-winter. We have designed structures to protect us—boats, planes, houses, cars and even Gortex—all warm little bubbles sheltering us from the world.

But sometimes these structures fail, or prove insufficient.

In that case, barring miraculous rescue, the game is over. A plane crashes in the Yukon, a boat starts taking on water in the North Atlantic, a father and son get stranded on an ice floe in the Arctic or fire traps a man on a construction crane 43 metres above Kingston, Ont.,—these are all good ways to die.

Unless you get lucky; and in this case luck will take the improbable form of a man in a bright orange suit coming at you out of the sky.

If you see that orange suit, well, you’re about to be miraculously rescued by a SAR Tech.

One Last Chance to Live

Tucked away on the country’s edges, there are small groups of elite soldiers on standby, a largely unseen force of highly trained technicians, ready to respond to a distress signal.

They are Royal Canadian Air Force Search and Rescue Technicians and once launched on a rescue mission there is not much that will stop them.

To get a sense of what perils they are willing to risk to save you—should you need saving—all that needs to be done is to consider their unit motto: That Others May Live.

Which is to say: some of the rescue missions they attempt are not survivable—even the most highly-trained survival experts can’t endure absolutely everything.

In October 2011, Sergeant Janick Gilbert, a 34-year-old SAR Tech based at CFB Trenton, parachuted into icy water near Igloolik, Nunavut, in an attempt to rescue two Inuit hunters whose boat had become stuck on the ice. Gilbert, alongside two other SAR Techs who jumped out of the Hercules airplane, knew it would be a very long time before any rescue helicopters could make it that far north to pluck them from the water. They jumped anyway.

When eventually a Cormorant helicopter from 103 Search and Rescue Squadron in Gander, Nfld., reached the scene after many hours of flying and no less than three stops for fuel, the hunters were still alive but only two of the three SAR Techs made it. Gilbert died in the water.

If you ask a SAR Tech about Gilbert’s fate, you will get matter-of-fact answers. It is all part of the job. “Those two Inuit are alive today because of the decision [Gilbert] made as a team leader to get guys to them,” says Warrant Officer Lance Teichrib, a SAR Tech from No. 103 Sqdn. “So for me it’s as simple as that; he made the decision based on the conditions he had and the need of the people in the water.”

I had the chance to ask Teichrib about Gilbert this past November, during the squadron’s annual week-long training exercise in St. John’s, Nfld. For this one week, the entire unit moves south from Gander to practice all manner of search and rescue situations.

As it turned out, their practice missions were not much less dangerous than their real missions.

The first time I went out with them, the mission was to fly out over the North Atlantic and rescue four boaters who’d gone overboard and were now floating in their survival suits.

In heavy fog, the massive Cormorant hovered roughly 40 metres above the water. The side door opened and Master Corporal Sean Daniells pulled down his mask and snorkel and prepared to leave.

It took an agonizing amount of time to winch him down to the water, and then even longer to work him across the waves so he could get his hands on one of the mannequins.

When Daniells came back in the first time, he didn’t look great. He was gasping, pale, steaming from the cold; his eyes were darting.

I expected he would not be going back in. More than expected actually, I was sure of it.

But he did. Three more times he went out into the hurricane storm of the rotor downwash, down into the frigid Atlantic to grapple a dummy out of the water and back into the helicopter. It was astounding to watch. 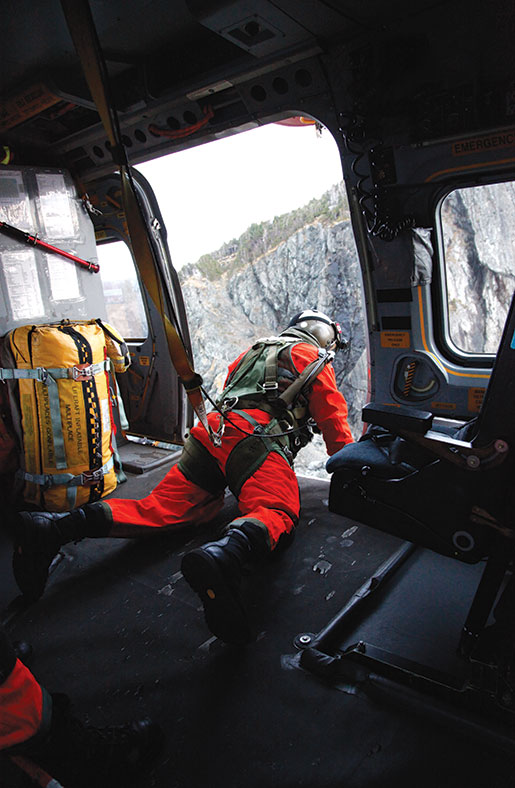 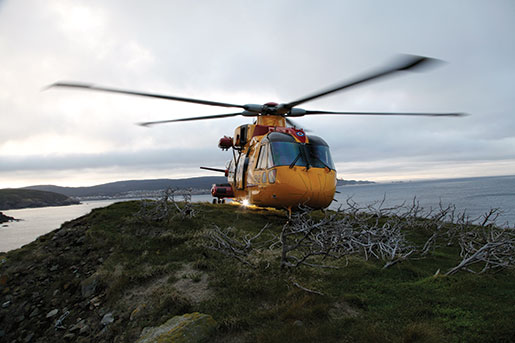 From top: A SAR crew member scopes out a landing zone which was perilously small for the large Cormorant.
PHOTO: ADAM DAY

If you ask Teichrib to explain what SAR Techs do, who they are, he has a ready answer.

“We’re the second biggest country in the world. People are flying around, people are hiking, people are sailing, you can’t drive an ambulance there, so, you know, if a plane crashes in the northern B.C. mountains, we go out there. So, all we know is there’s a missing aircraft, maybe an [emergency beacon]. You find it, now you gotta assess it from the air, you’re not on the ground checking out the drop zone, making sure there’s no hazards and stuff. You’re looking at it from the air. And if it’s at night, you’re looking at spotlights and flares aiding you the best they can.”

There is never any certainty in their missions. Every day they go to work, every mission they go on, is a careful balance of risk versus chance of success. “We’re all about risk management, not risk aversion, so we make the call based on our experience and our abilities. Can we jump in there or not? Yes? Okay, we’re parachuting in.”

The myriad of skills the rescue technicians have are simply there to enable them to do their job. They are like advanced paramedics, but with the skills to get anywhere and basically survive almost anything.

To become a SAR Tech is, as you might expect, not easy. In fact, the chances of making it all the way through SAR selection and training are so small that it is easily one of the Canadian military’s most difficult units to join.

Consider, for example, what awaits a recruit as they near the end of the three-week selection course.

“So then we get on the bus to Jarvis Lake [Alberta], and that’s where the reality hits,” said Teichrib. “It’s midnight, one in the morning, the bus pulls up at the end of this dark road and everyone is told to get off, put your packs on and go down this road until you run into staff.”

It’s about a five-kilometre road, but the recruits don’t know that. It’s freezing and snowy, dark.

“It’s a reality check,” said Daniells, “because you’re on a nice warm bus, you’re used to a nice warm classroom, you’re not appropriately dressed, you hit the snow, everything else, and it’s game on, just like it would be jumping out of a plane or helicopter, you’ve now gotta get to your target.”

The assessment ends with a difficult test. The candidates are sent out into the woods, still in the middle of winter, with very minimal food. They set up a camp by themselves and just try to survive for days—hunting or gathering food, trying to stay warm.

Of course, just because a candidate makes it through selection—is found ‘suitable’—doesn’t mean they’re going to get placed on the SAR Tech course. Sometimes there are only so many job openings, so not everyone gets the chance. Then there is still a year-long course in pretty much every skill imaginable—mountaineering, parachuting, diving, boating and a great deal of medical training which must also be passed. 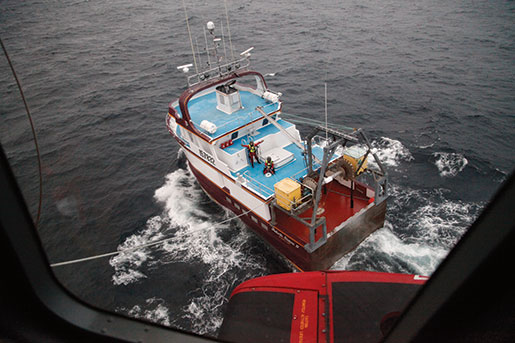 Sar Techs Teichrib and Daniells after being hoisted down to a small boat.
PHOTO: ADAM DAY

Meanwhile, Above the North Atlantic

Later on in the week, there was another exercise. The goal this time was to place a SAR Tech on the deck of a small fishing boat as it was tossed about by high and heavy seas.

It was Teichrib’s turn to take the lead.

The boat was small to begin with, but it was also complicated by some seriously high antennas and rigging over the rear deck. All in all, I thought it was certainly impossible to get Teichrib down onto that boat without catastrophe.

But they did it. In a display of perfect teamwork, the pilots hovered just above the pitching, rocking boat. The flight engineer, lying on his belly, hanging out the door, lowered Teichrib down bit by bit, constantly adjusting the helo’s hover over the microphone.

Remember, this is only training. But even to conduct this kind of training requires a level of bravery that could in itself be worthy of recognition. Consider for example that SAR Tech Sergeant Stéphane Clavette and Sgt. Michael Cox both recently received the Medal of Bravery for their actions on Feb. 11, 2011, when they conducted a rescue in bad conditions off Halifax. The citation notes that “the search and rescue technicians were carefully lowered from a helicopter onto the vessel, which was being tossed about in the rough seas. The victim was secured in a rescue basket, but the deck of the fishing boat was so icy and unstable that the SAR Techs had difficulty keeping the basket steady for extraction. Finally the victim was hoisted up to the aircraft, and another cable was lowered to the deck to retrieve the two rescuers.”

With the exception of there being no actual victim in this case, Teichrib and Daniells did pretty much the same thing.

Orange Heroes in the Sky

As stoic as they tend to be, the perils of their jobs are not lost on them. “For me, I had a mission where I kind of had to consider everything,” said Daniells. “We had a case of a boat that was taking on water and it was only in range of the aircraft, not the helicopter. There was a medical case on board. So we had to make the decision either to jump or stay on the aircraft because we didn’t necessarily have a backup plan. The fact that we’d probably have to wait for a ship to come get us because no helicopter could get out that far, it really makes you think of how you take for granted everything that you have. Your whole life, your kids, the unit, your brethren, everything that you depend on, everything starts going through your head. And to make that final decision to say ‘all right, I’m gonna potentially sacrifice everything based on my decision,’ it just makes you ponder on the what ifs, the fact that you can act on that and say this is my role, there’s life at risk, and I’m going forth.”

In the end, after the week’s exercise, it was clear the Search and Rescue squadrons are very unique. There is no shortage of bravado in the military—everybody wants to have all the courage in the world—but when it comes time, when the one thing required is the determination to go onward despite the risks and the hardship, not everyone has what it takes. The SAR Techs have to prove they have it every single day.

If you are ever in need of miraculous rescue, look up and pray for orange men to descend upon you.