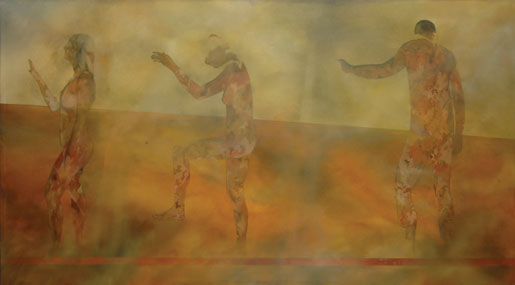 Inspiration can come from the strangest places. For Ottawa artist Bruce Stewart the idea to paint the military ran down his street three years ago. He explains, “I live…across from the rehab centre and…this great, big guy on two metal legs came jogging down my street and he ran past me… I sorta shook my head and said that’s Afghanistan… I have to do something about it. So I started doing something about it.”

Stewart created a series of five paintings titled Road Walkers, using colours and patterns from the military camouflage from Afghanistan to paint the figures and backgrounds. This artist is a traditionalist, and still mixes much of his paint by hand, using earth pigments and oils. Throughout this series he used a pea-soup coloured palette which is evocative of the chlorine gas attacks from the Second Battle of Ypres during the First World War. In one 30-foot-long canvas four shadowy figures wander through what appears to be sand or fog. 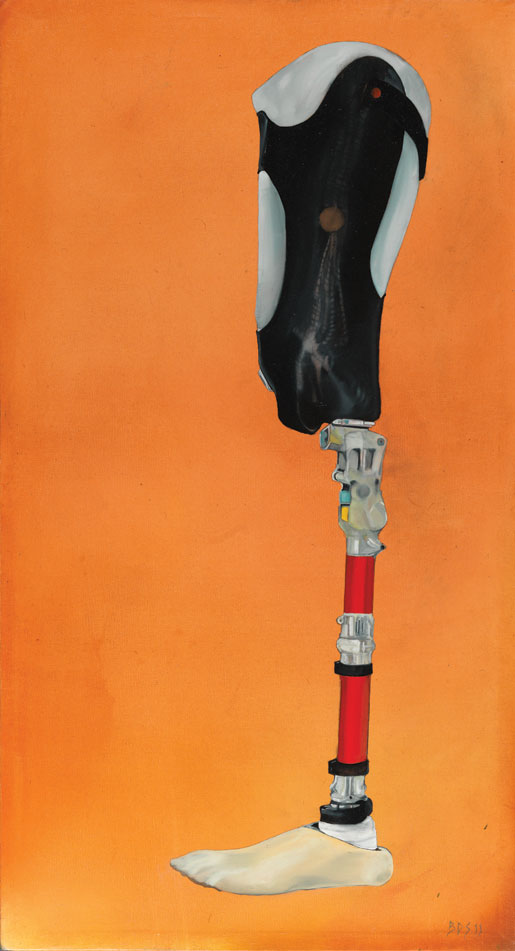 In contrast, the severe realism of his oil painting of Canadian Sergeant Bjarni Nielsen’s prosthetic leg is inescapable. Neilsen lost his leg in July 2010 after stepping on an improvised explosive device southwest of Kandahar. Stewart hopes to paint more prosthetic limbs, “It is sort of the fallout, isn’t it? I would like to continue. I think it would be very sobering, and I don’t know how many artificial legs came out of that…conflict, and I probably will never find out, but a room full of 30 of them would be really, really disturbing.”

Although Stewart didn’t begin his career painting the military, he always knew he wanted a career in the arts. He graduated in 1978 with a Fine Arts Degree from the Nova Scotia College of Art and Design, Halifax, and moved to Scotland, the land of his ancestors. After a year he returned to Ottawa to work at the Canada Science and Technology Museum. Fifteen years later he started his own company and these days he lives in the house he grew up in and concentrates on his art.

The painting of the prosthetic leg and a sketch of double amputee Master Corporal Mike Trauner were purchased as part of the permanent collection at the Canadian War Museum.

PrevPrevious ArticleIs The Soldier On Program For You?
Next ArticleThese Are The Results For The Week Of March 11 – March 17Next