Doug Bradford is a barber. He has been cutting hair for 50 years in his hometown of Sault Ste. Marie, Ont., and in his spare time he paints. He never went to art school. His only teacher was his mother, who loved art and encouraged all six of her children to sketch and paint. She must have been remarkable, since two of them, Doug and his brother Kenneth, paint well enough to have their work collected by the Canadian War Museum.

Bradford’s art is lively and bright and his fat, wet brushwork bleeds into the paper, creating lovely rivers of colour. Watercolour is his specialty. “I like the freshness and the immediacy, but I still have a fear of putting the colours on too bright,” he mused. “I love doing all aspects, landscape scenery, still life, love painting people, and I just always seem to prefer watercolour.”

He uses the white of the paper for contrast and highlights, and the blues and golds give every painting a jewelled brilliance. Oddly, the colours are bold and fearless in contrast to how you might expect them to look, given the artist’s worry. 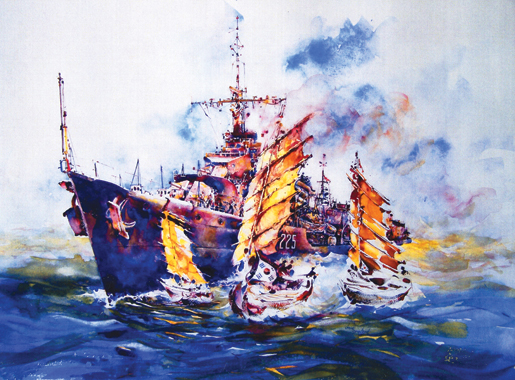 In 2003, a friend of his suggested that Bradford apply to participate in the Canadian Forces Artists Program (CFAP). Thirty-eight years earlier, the Canadian Armed Forces Civilian Artists Program (CAFCAP) was created to ensure there was an artistic record of Canada’s military history. Lack of funding resulted in the program’s termination in 1995, but six years later it was resurrected as CFAP. In April 2004, Bradford was selected by CFAP as an artist. He spent five days aboard the HMCS Calgary at Canadian Forces Base Esquimalt, B.C., and remembers, “I was taken all over the ship and gathered as much as I could on the life on ship. Everything was happening so fast, there wasn’t a moment they were standing still until they were in bed.” 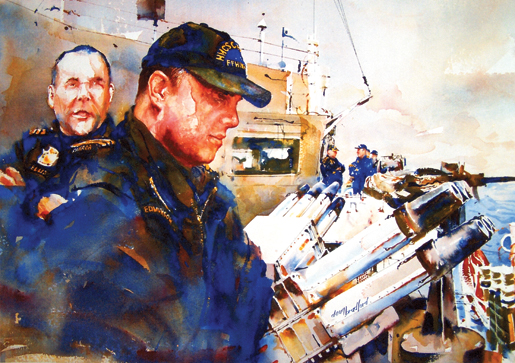 “I use three colours, four sometimes—alizarin crimson, cadmium yellow medium and French ultramarine blue and sometimes Hooker’s green….” Through blending and working those three key colours in his palette he has created a series of work from HMCS Calgary that is unified and sparkling. Two paintings from the series were donated to CFAP and 15 to the Canadian War Museum. His work is currently touring Canada as part of the exhibition, A Brush With War. 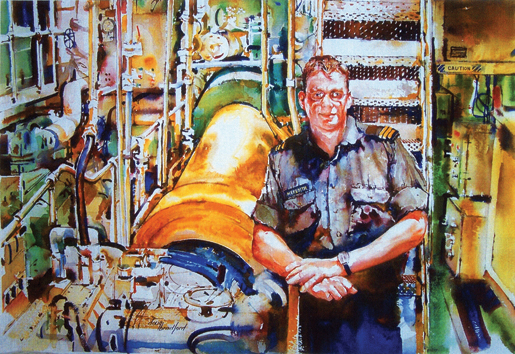 The military has been a subject he has revisited time and again. In fact, over 20 years ago he was so moved by the faces of veterans on Remembrance Day that he went home and painted them. That painting was chosen for the November 1987 cover of Legion Magazine and the original hangs in city hall in Sault Ste. Marie.  “I love doing people in the military—a sense of pride, I guess… . My uncle was in the First World War and the Second World War,” he said. In October 2009, Bradford’s painting, A Dangerous Threat, was one of six chosen to commemorate the 100th anniversary of the Royal Canadian Navy in 2010. 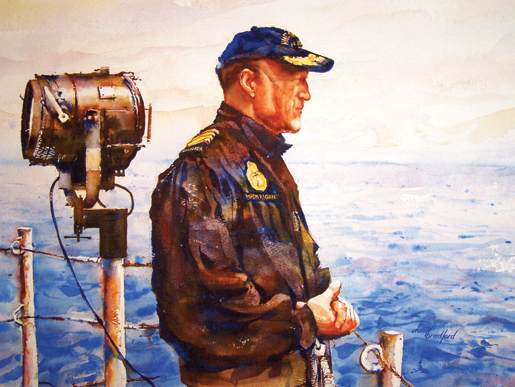 These days Bradford works two days a week as a barber and spends the winter months painting. His hobby has resulted in some of the finest military art of our time. 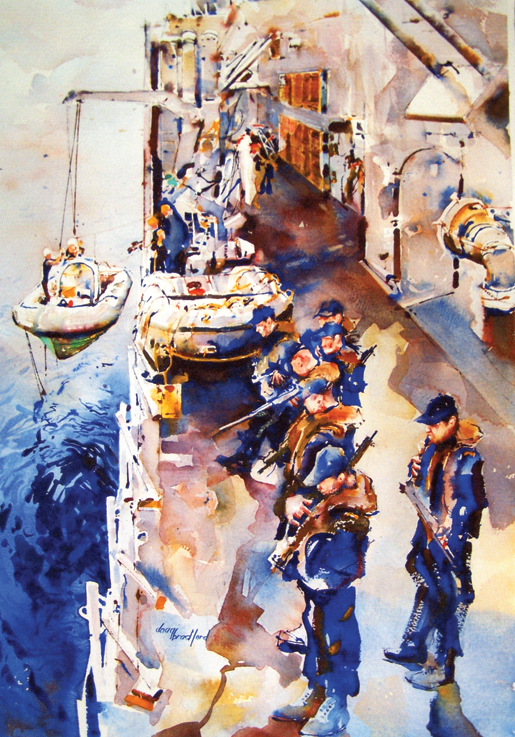