In an issue that focuses on Canadian youth and explores our role in teaching and encouraging them to understand military history and remembrance, it is important to acknowledge that in some countries, veterans include the very young. Those kids carry the burden of war both as victim and perpetrator, and Canadian photographer Robert Semeniuk has witnessed that cost first-hand. His powerful images rank with some of the most affecting war art of our time. There is an odd similarity in the faces of his young subjects; a stillness, and that want of emotion, combined with such gritty subject matter, is riveting and disconcerting. They have been used as iconic symbols in the battle to stop landmines, and draw attention to improving world health. 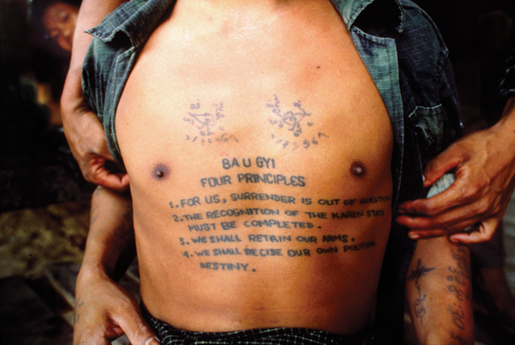 The tattooed chest of a young Karen fighter spells out his fight for freedom and democracy against a suppressive government in Burma (Myanmar).
PHOTO: ROBERT SEMENIUK

He describes the scene when he photographed a young Karen fighter, in Burma (Myanmar) who had his chest tattooed with the four guiding principles of the Karen revolution. “They had young bodies but old faces. Nearby, a cigar-smoking 14-year-old, with an AK-47 over his knee, tells me how, with claymore landmines, he killed 10 Burmese soldiers the day before.” The photojournalist knows that children mimic authority, and worries about what sort of parents and leaders they will grow into. “When kids are witnessing all of this, most kids don’t understand what is going on, so they internalize all of this trauma, and they do not know how to deal with it. From travelling all around the world it became real obvious to me…. I don’t mean to belittle people shooting each other but that is just the beginning.” 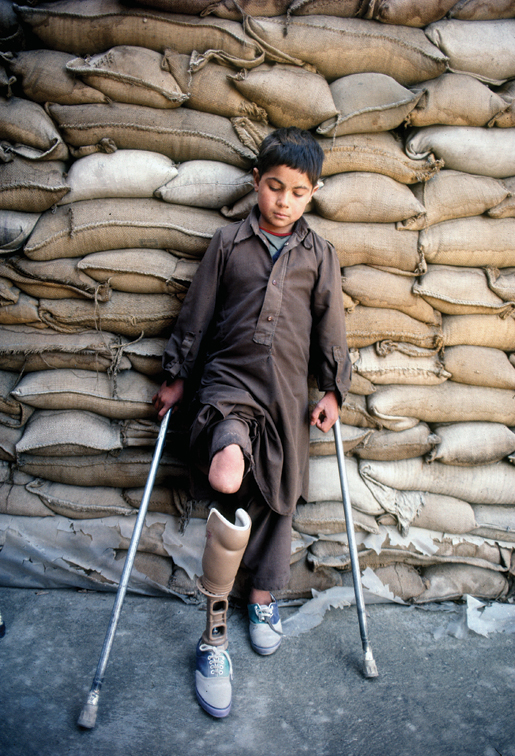 Nine-year-old Wazir Hammond rests against a wall of sandbags that protect a hospital in Kabul, Afghanistan.
PHOTO: ROBERT SEMENIUK

Semeniuk was born in the farming village of Big Valley, Alta. He didn’t get the photography bug until he was a student of environmental studies at York University in Toronto. He borrowed his roommate’s camera and began shooting, and quickly learned that photography was a universal means of communicating anything. Semeniuk was hooked. His first big assignment was with National Geographic. They hired him to live with the Inuit for two years, and he has spent the last 30 years working as a freelance photojournalist, author and human and environmental rights activist. His clients include major magazines around the globe, and he has travelled to over 80 countries and a dozen war zones. That work has earned him over 40 award nominations, including multiple top honours in the National Magazine Awards, The Science Writers Association and The Canadian Association of Journalists.

Many war artists have to distance themselves from what they see to be effective when recording war, but Semeniuk has done the opposite. The photojournalist does not just embrace his work, his subjects are also his causes and he is passionate about changing the world. “I do not believe in objectivity,” he said. “Neutrality exists in the offices in Geneva. When you get on the ground there is no such thing as neutrality. Frankly, it is really easy to pick sides…. I don’t feel I have a choice here. I really don’t. I don’t know what else I would do.” 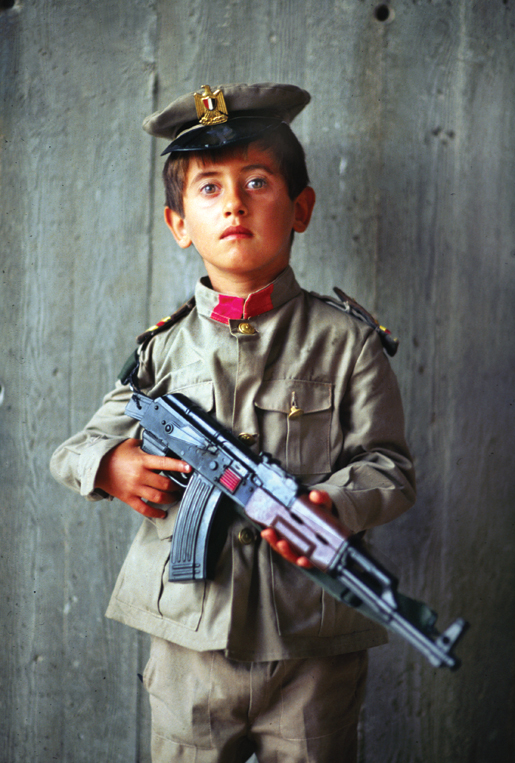 He lives for months in the dark worlds he photographs. From such grim spots he returns home to his wife and daughter on Bowen Island, B.C. At 60 it is natural to expect that he may be anticipating retirement, but not Semeniuk. “Retire? Retire? From what?” he asks.

Semeniuk remains an optimist and with his images has found a means of reflecting back to us the cost of war on the world’s children. His photographs are both compelling and heartbreaking, but by displaying these images he is reminding us why we gather to say, “Lest We Forget.”