The bleak quietness of William MacDonnell’s canvases is strangely threatening, and this is quite deliberate. The scenic painting titled Tragedy On A Country Road marks a place where Canadian soldiers, while driving, hit a landmine in the former Yugoslavia. Even though the viewer cannot help but pick up on the threat, it is obscure and hidden much like the landmines our soldiers often encounter while overseas.

At first glance, MacDonnell’s work is idyllic, with no signs of violence. What appears as a quiet winter landscape in the artwork titled In A Forest Near Smolensk is in fact the same place in Russia where approximately 4,500 Polish soldiers were murdered by Stalin’s regime and buried in a mass grave.

Many of MacDonnell’s works are dominated by dirty, white skies on which he overlays ghostly embossed typography. The stencilled capital letters spell the names of fallen angels from the Book of Enoch (from ancient Jewish literature). Other works are covered with acrylic spatters of paint, dripping down the compositions and out onto the borders. Both devices are solid metaphors for war. 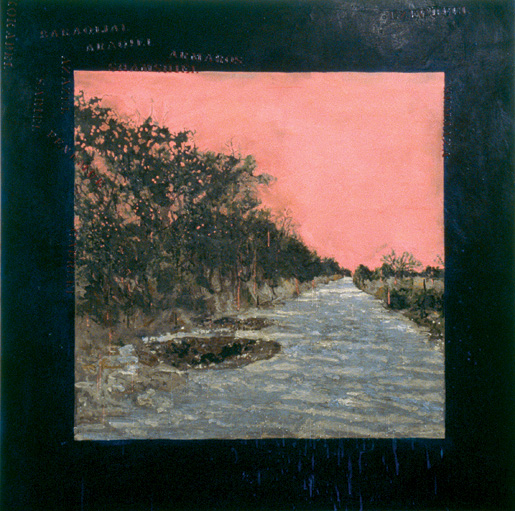 MacDonnell was one of three artists invited by the Princess Patricia’s Canadian Light Infantry (PPCLI) to visit peacekeeping operations in Croatia. His visit—in late August 1994—lasted approximately 10 days. He spent the next year creating canvases of the time he spent in the Krajina region of the former Yugoslavia.

He later wrote: “There was a town, Kasic, I think…it was completely destroyed. On the edge of town there was what was left of a church and in the cemetery there were desecrated tombs. Such hatred. All that culture destroyed. Even bodies….

“What struck me was the fact that the worst aspects of the war seemed to be based on the destruction of each other’s culture. It was always churches, schools, libraries and monasteries that were being destroyed, sites that were hundreds or even thousands of years old with no military advantage. When you understand that it’s a cultural war, the whole thing seems to make some kind of horrible sense. You begin to understand the fear and how it works….”

MacDonnell was an inspired choice for that assignment. Not only was he the best known of the three artists, respected in Canadian art circles, but he loves history and had the background to help him understand the military perspective and operations. In the early 1960s he trained as an army signals officer. Since visiting Croatia he has taken many personal trips to Russia, back to the Balkans, Vietnam, Germany, Rwanda and other areas of conflict. He has recently returned from a three and a half week trip in Afghanistan, travelling with 2RCR to gather material for a painting for the Canadian Forces Artists Program. His paintings are in the collections of the Canada Council Art Bank, the Canadian Embassy in Washington, D.C., the Glenbow Institute in Calgary, The Canadian War Museum, and many other places.

MacDonnell’s interest in history and conflict, and his talent have combined to create works that by their very absence of violence record the terrible cost of war.