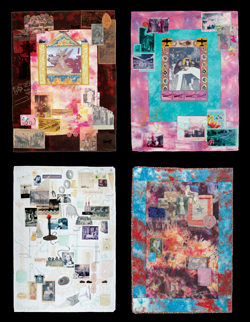 Johnnene Maddison wanted to find a way to recognize the contribution of Canadian women on the home front during World War II, and what better way than in quilting, sewing and embroidery– stereotypically a woman’s craft. Her choice of medium lends both truth and irony to the depiction of women’s work at that time. Truth, in that women were expected to effortlessly manage the domestic side of life in difficult emotional and financial times, and irony in that these same women had to maintain their femininity and glamour while also taking on the physical and gritty work of men.

The artist writes, “I chose the medium of fibre art for the works in this exhibition rather than painting or drawing because it so beautifully expresses the way in which women were so resourceful in not only holding worn garments together, but holding together the economy and the home front while supplying the needs of the military….”

Born in Detroit in 1943, Maddison was raised in a crowded two-bedroom duplex with eight family members. She remembers her mother, aunts and even grandfather working in the factories to provide for the family and to answer the call for workers while the men were at war.

Delphine James, the artist’s mother, worked at the Ford Motor Company plant in Dearborn, Mich., and was the inspiration and one of the subjects for this body of work. Cutting diagonally across her mother’s brilliant blue quilt is a fiery swath of red and black. Over this background are laid dark photo transfers of her mother and father, and the handwritten words he sent from overseas. “Don’t forget, if it’s a girl name her Delphine Emily…love you and don’t worry about me. I’ll be all right.” Her father, whose name was John, was killed in Italy in 1944, and never did meet his daughter. She was named Johnnene, in his honour.

After the war, her mother tried to keep the job she so desperately needed, but no one was even willing to discuss her situation let alone offer her employment. The incongruity of the time seeps into many of the 15 quilted artworks that are on display at the Canadian War Museum in an exhibition titled Stitches In Time. Thirteen of the quilts are tributes to individual women and two honour groups of women, The Farmerettes Brigade and The Women of Polymer. The exhibit runs until January 2008.

In the quilts that focus on individual women, the artist has mimicked European medieval art, particularly the paintings in The Book of Kells from around the 8th century. There, saints were typically embedded in gold, and, similarly, in Maddison’s art the women of the home front are capped with golden halos and sheltered in ornate golden shrines. Symbols and icons of their work and lives–from bullets and planes to shoes and stockings–decorate the fabric.

Maddison is a full-time artist, living in London, Ont., who has been exhibiting in Canada and the United States for over 30 years. She also works as a guest curator and art instructor for a variety of exhibitors, galleries and stitchery guilds. Her art continues to be inspired by the lives and issues of women, and although there can never be enough artwork to honour the role of women during wartime, Maddison has certainly contributed a lovely collection of work.