Bodies of civilians shot by Russian soldiers lie on a street in Bucha, Ukraine, on April 3, 2022. The hands of one victim are tied behind his back.
National News Agency of Ukraine
The verified civilian death toll after more than nine months of war in Ukraine was approaching 7,000 last week, with more in the process of corroboration, independent monitors reported.

In a document released Dec. 5, 2022, the Office of the United Nations High Commissioner for Human Rights pegged the figure at 6,702, adding 10,479 civilians had been injured since Russian troops invaded the country on Feb. 24, 2022.

At least 424 of the dead were children, the office said in its monthly update.

“Most of the civilian casualties recorded were caused by the use of explosive weapons with wide area effects, including shelling from heavy artillery, multiple launch rocket systems, missiles and air strikes,” said the report, which covered developments through the month of November.

“OHCHR believes that the actual figures are considerably higher, as the receipt of information from some locations where intense hostilities have been going on has been delayed and many reports are still pending corroboration.”

The brief said uncorroborated allegations of numerous civilian casualties were emerging from Mariupol in Ukraine’s Donetsk region, Izium in the Kharkiv region, and Lysychansk, Popasna and Sievierodonetsk in the Luhansk region.

The UN has been documenting civilian casualties in Ukraine since Russian President Vladimir Putin ordered his troops to take parts of the Crimean peninsula in 2014.

The updates are based on verified information the UN Human Rights Monitoring Mission in Ukraine collects from victims and their relatives, witnesses, administrative and medical records, open-source documents, photo and video materials, criminal investigations, forensic reports and other data.

“All sources and information are assessed for their relevance and credibility and cross-checked against other information,” said the office. “In some instances, corroboration may take time.”

“The woman had a gunshot wound to the head and her body bore torture marks.”

On Dec. 7, 2022, the UN human rights office released a 33-page report on early-war summary executions and lethal attacks on individual Ukrainian civilians by Russians in parts of the Kyiv, Chernihiv and Sumy areas.

By Oct. 31, the monitoring mission had recorded summary executions and attacks on civilians in 102 villages and towns. All had occurred between Feb. 24 and April 6.

“The acts in question were committed by Russian armed forces in control of these areas and led to the deaths of 441 civilians (341 men, 72 women, 20 boys and 8 girls),” it reported, adding information in the process of corroboration suggests the figures are “likely considerably higher.”

In the city of Bucha alone, the UN monitors had documented the killings of 73 civilians (54 men, 16 women, two boys and a girl) by Oct. 31, and they were assessing another 105 deaths. 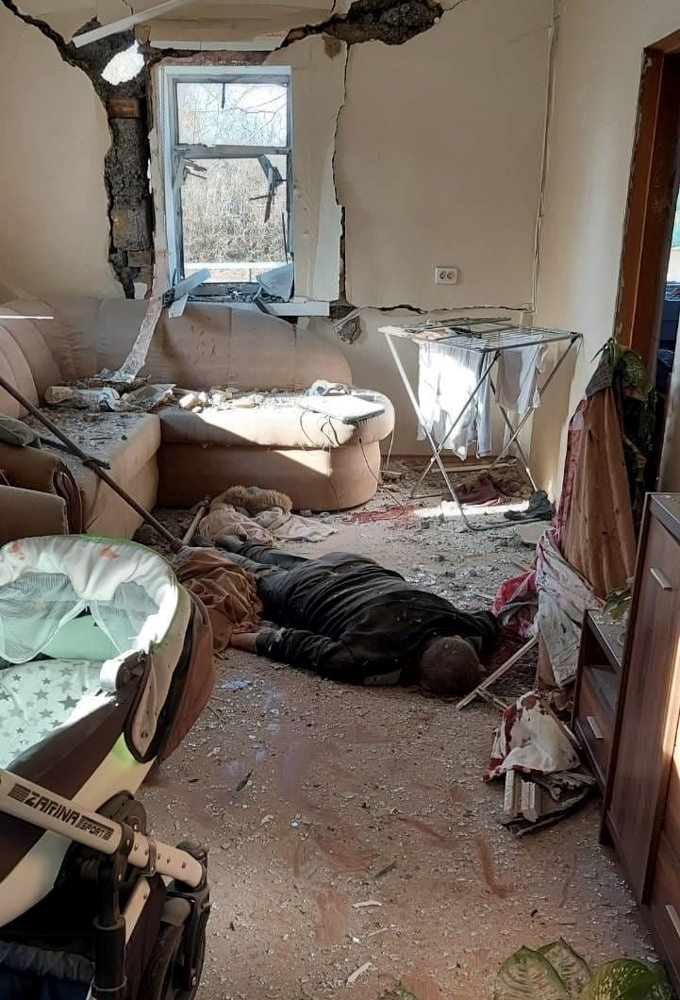 A Ukrainian civilian killed during the Russian bombing of Chernihivp lies where he fell.
Ukrainian Ministry of Internal Affairs
In one of the dozens of cases the report details, a resident of Vokzalna Street in Bucha returned to his house last April 7 and found the naked body of a 34-year-old woman in his basement.

“Her body was covered with a fur coat,” it said. “The woman had a gunshot wound to the head and her body bore torture marks, including on her breasts, suggesting that she may have been a victim of sexual violence.

“Witnesses interviewed by [UN officials] said that the house had been occupied by Russian troops.”

The report’s recommendations seemed almost comically obvious—and about as futile as opposing an earthquake with an argument.

“Respect…international humanitarian law,” it told the Russians. “Refrain from directing attacks against civilians…. Ensure timely and effective investigations into all allegations of unlawful killings.”

Meanwhile, the tide of atrocities appears overwhelming. The Ukrainian prosecutor general’s office has catalogued 49,471 war crimes and crimes of aggression that it says have been committed since the Russian invasion began.

Russian troops have occupied up to a quarter of Ukrainian territory since the war began, but counteroffensives by Ukrainian forces have reduced that to about 15 per cent, mainly in the east and southeast.

Researchers told a recent conference at the University of Ottawa that crimes and atrocities committed by Russian soldiers increased just before they surrendered territory. The Canadian Press reported that it had visited the recently liberated town of Balakliya, where local authorities said Russian troops had run a torture chamber in the local police station.

“Every city that the Ukrainian army liberates, we find there places of mass atrocities, mass graves, torture rooms,” he said. “All those cases are being investigated right now. They are evidence of war crimes, crimes against humanity.

“And if we take a look overall at Russia’s crimes in Ukraine, it can amount even to a genocide.”

Ukrainian prosecutor general Andriy Kostin has even equated Russia’s recent strikes against energy infrastructure with genocide. The attacks plunged millions of Ukrainians into cold and darkness, and compromised the freshwater supply.

Ukrainian President Volodymyr Zelenskyy has urged the United States to support the creation of a special tribunal to try the Russian leadership for the crime of aggression for waging war on Ukraine.

“This is why it’s indispensable for this peace formula to establish a special tribunal for the crime of aggression committed from Russia against Ukraine.”

The court is investigating war crimes and crimes against humanity in Ukraine, which can be difficult to link directly to orders from the Kremlin.

The UN Genocide Convention defines genocide as acts “committed with intent to destroy, in whole or in part, a national, ethnic, racial or religious group.”

It was decades before the Holodomor—the enforced famine of Soviet Ukraine that killed millions in 1932-33—was officially recognized as a genocide. Canada did so in 2008.

International Development Minister Harjit Sajjan recently invoked the Holodomor when addressing the Russian invasion, but said it’s too soon to say whether what’s been happening amounts to genocide.

“Russia behaves like a terrorist state,” Nikolenko told CP. “It kills innocent people, without any particular reason or motive, just because they are Ukrainians and they continue to resist.”

The push for a special tribunal has gained momentum after European Union Commission Chief Ursula von der Leyen backed the proposal. France then became the first European country to publicly declare its support. Baltic states and the Netherlands are reportedly on board, but the United States, Germany and the United Kingdom have expressed reservations.

Von der Leyen said a special tribunal could only be formed with UN backing. The Kremlin has strongly rejected the proposal, saying it would have no legitimacy.

That leaves two options “to ensure that justice is served,” said the EC paper; both would require “strong” UN backing:

The EC document added that Russia and its oligarchs must compensate Ukraine for the damage and destruction caused by the invasion.

EU members have frozen 19 billion euros in assets belonging to Russian oligarchs. Around 300 billion euros in the Russian Central Bank reserves have been blocked by the EU and other G7 partners.

The commission suggested the funds be invested, with the proceeds to go to Ukraine. It said once hostilities end and sanctions are lifted, the funds—offset as part of war reparations—should be returned under the conditions of a peace agreement.

The Office of the United Nations High Commissioner for Human Rights report on early-war atrocities in Russian-occupied Ukraine can be found here. The European Commission document is here.

An award-winning journalist, editor and photographer. He has reported on the downfall of South African apartheid and from war fronts in Kosovo and Afghanistan.
All Posts
PrevPrevious ArticleLast gasp: The war horse in WW II
Next ArticleWar Santa and the Ukrainian wish listNext