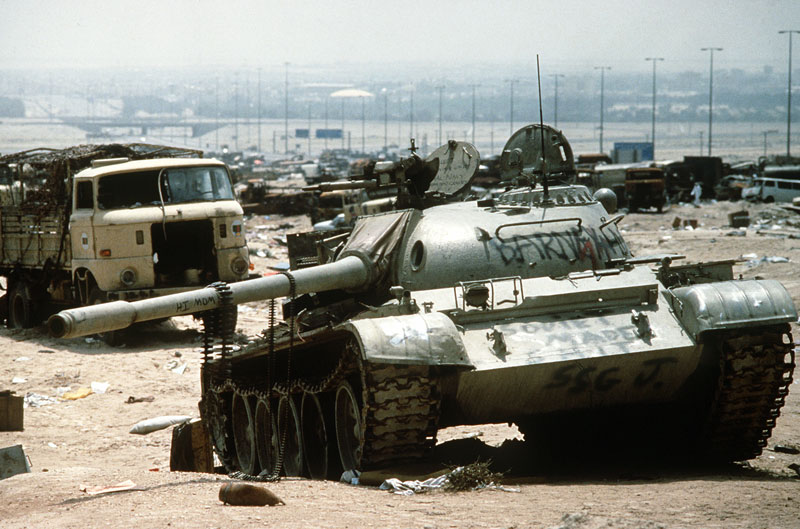 A destroyed Iraqi Army T-55 tank lies among the wreckage along the infamous Highway of Death in April 1991.
Tech. Sgt. Joe Coleman/USAF
A team of American scientists claims to have solved the mystery of Gulf War illness in a detailed genetic study that points the finger of blame at sarin nerve gas.

The researchers at University of Texas Southwestern Medical Center’s epidemiology division in Dallas not only found that veterans exposed to sarin during the Persian Gulf War were more likely to develop problems associated with the illness, they also discovered the risk was regulated by a gene that can enable some people’s bodies to better break down the nerve agent.

The study was headed by Dr. Robert Haley, a professor of internal medicine and the division director who has been studying Gulf War illness (GWI) for 28 years. His group’s findings were published in Environmental Health Perspectives, a peer-reviewed journal supported by the National Institute of Environmental Health Sciences. 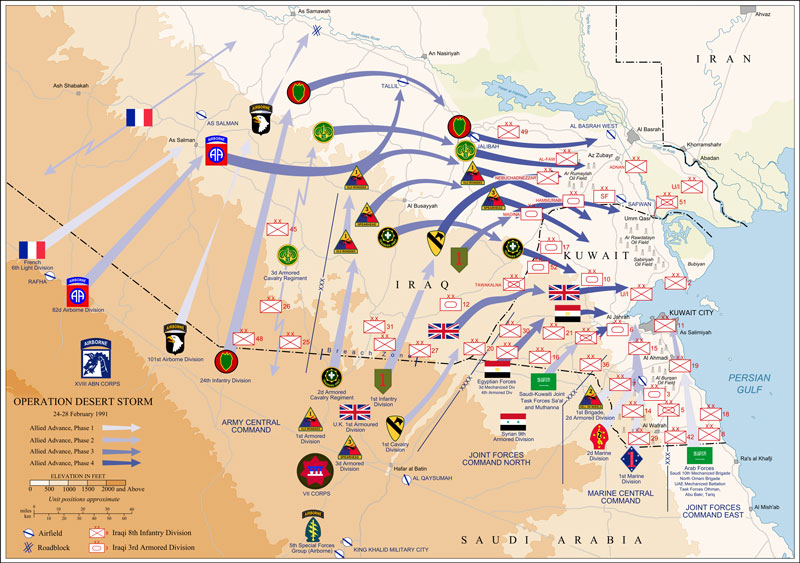 More than 5,100 Canadians were deployed in the region for about six weeks of fighting.

“Quite simply, our findings prove that Gulf War illness was caused by sarin, which was released when we bombed Iraqi chemical weapons storage and production facilities,” said Haley. “There are still more than 100,000 Gulf War veterans who are not getting help for this illness and our hope is that these findings will accelerate the search for better treatment.”

The caches of Iraqi chemical weapons were blown up in January 1991. Studies have suggested the effects of the sarin gas could have been compounded by organophosphate anti-nerve agent medication and the liberal use of pesticides to prevent malaria exposure among allied forces.

More than 5,100 Canadians were deployed in the region for about six weeks of fighting in 1991 to oust Saddam Hussein’s Iraqi forces from Kuwait. Half the Canadians were on the battlefield’s periphery during combat operations. 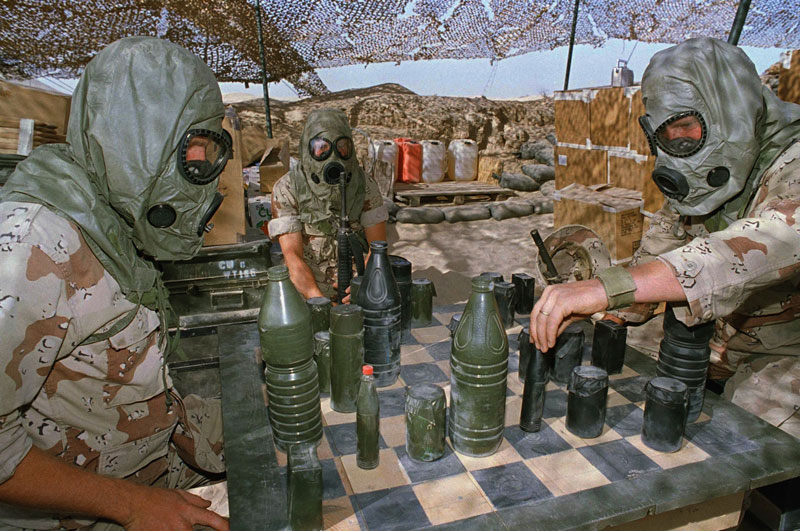 Depleted uranium, used in armour-piercing munitions and some tank armour, was long considered by some a primary suspect due to its toxicity and mild radioactivity.

But a June 2013 report by the Canadian Parliament’s standing committee on veterans’ affairs cited several studies that found no evidence of depleted uranium in the bodies of sufferers.

The University of Portsmouth School of Earth and Environmental Sciences announced in February 2021 it had proven that depleted uranium did not cause GWI.

The Portsmouth group tested veterans’ urine for depleted uranium that would still have been present if it had caused the ailments. It found none.

“As far back as 1995…the evidence was pointing toward nerve agent exposure.”

“The plausibility of the link between depleted uranium and the illness has bubbled along now for nearly 30 years, but we would argue it’s time to look elsewhere,” Randall Parrish, a professor of isotope geology at the school in the south of England, said at the time. Haley co-authored the 2021 report.

Haley’s latest study found that exposed Gulf War veterans with a weak variant of the gene that breaks down sarin were more likely to develop symptoms of the illness than exposed veterans who had the stronger forms of the gene.

“As far back as 1995, when we first defined Gulf War illness, the evidence was pointing toward nerve agent exposure, but it has taken many years to build an irrefutable case,” said Haley, the U.S. Armed Forces Veterans Distinguished Chair for Medical Research. 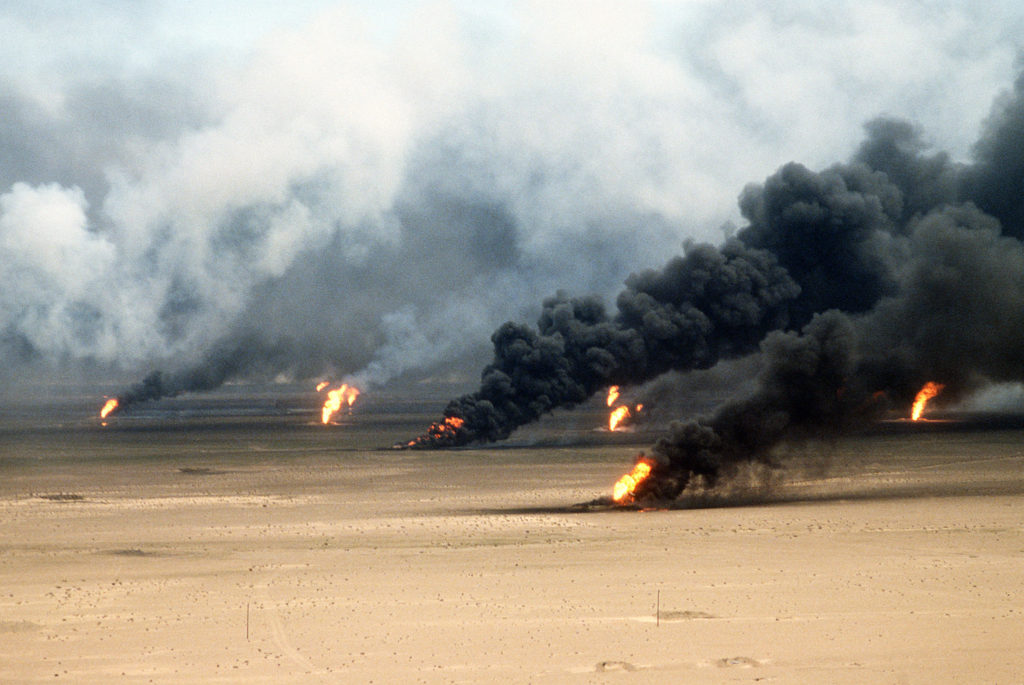 Oil well fires rage outside Kuwait City in the aftermath of Operation Desert Storm. The wells were set on fire by Iraqi forces before they were ousted from the region by coalition force.
Tech. Sgt. David McLeod
A toxic nerve agent, sarin was first developed as a pesticide, then adapted for chemical warfare. Its production has been banned since 1997.

Sarin liquid or gas enters the body through the skin or breath and attacks the nervous system, often resulting in death. Studies of those who have survived exposure to sarin have revealed that lower-level exposure can lead to long-term impairment of brain function.

The U.S. military has confirmed that chemical agents, including sarin, were detected in Iraq during the Gulf War. Satellite imagery documented a large debris cloud rising from the Iraqi chemical weapons storage site after it was bombed. The plume, later confirmed to contain sarin, passed over American troop positions and set off thousands of nerve gas alarms.

Critics of previous studies linking reported exposure to sarin with GWI symptoms have raised questions of recall bias, suggesting afflicted veterans assumed their issues were linked to the nerve agent.

“What makes this new study a game-changer is that it links GWI with a very strong gene-environment interaction that cannot be explained away by errors in recalling the environmental exposure or other biases in the data,” said Haley. 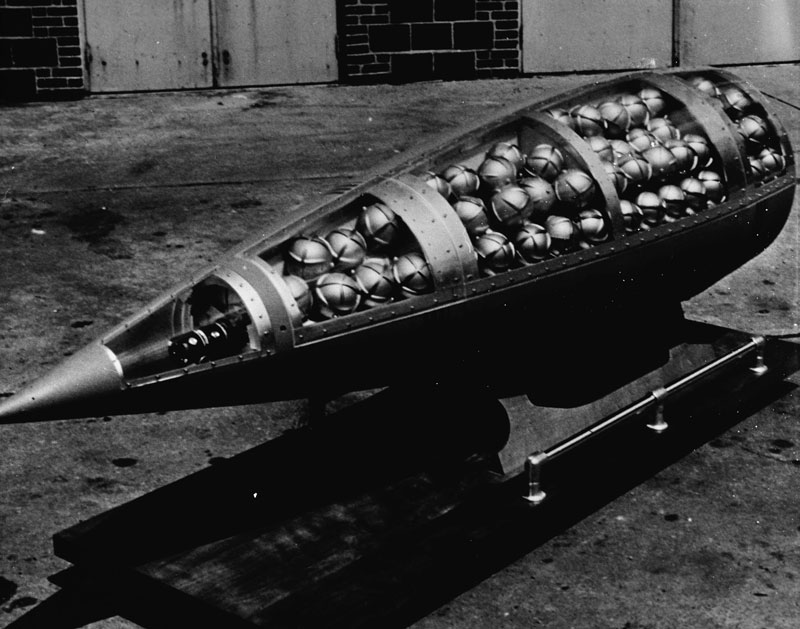 A 1960 U.S. “Honest John” warhead, showing its payload of sarin bomblets. Sarin munitions have since been banned by international treaty.
Wikimedia
Haley and his colleagues studied 508 randomly selected Gulf veterans with GWI and 508 without symptoms. They determined sarin exposure by collecting blood and DNA samples and asking the veterans if they had heard chemical nerve gas alarms during their deployments.

The researchers tested the samples for two variants of a gene called PON1: the Q variant, which generates a blood enzyme that efficiently breaks down sarin, and the R variant, which is not as effective.

Gulf veterans’ chances of developing GWI rose by between 3.75 and 8.91 times, depending on the combination of genotypes in their blood and DNA.

“Your risk is going up step by step depending on your genotype, because those genes are mediating how well your body inactivates sarin,” said Haley, noting that even the highest-level genetic protection can be overwhelmed by more intense exposure. 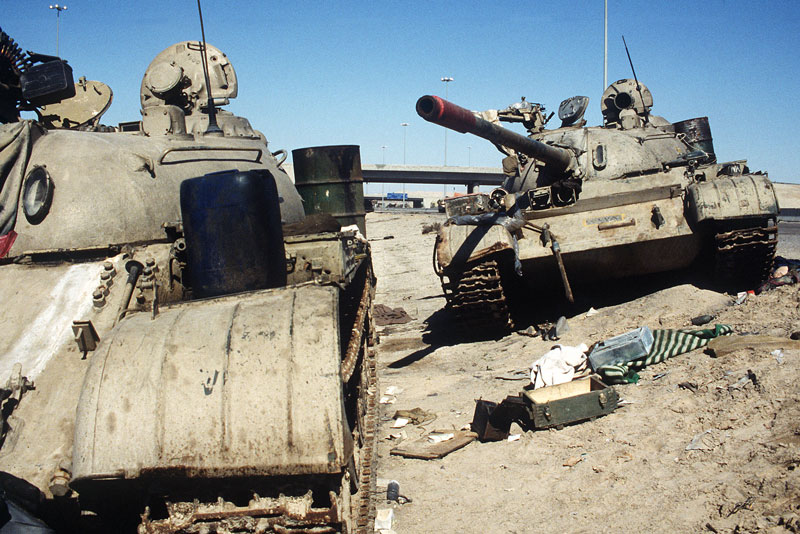 “There’s no other risk factor coming anywhere close to having this level of causal evidence for Gulf War illness,” said Haley.

The team is continuing its research into Gulf War illness and its effects, including whether they are reversible.