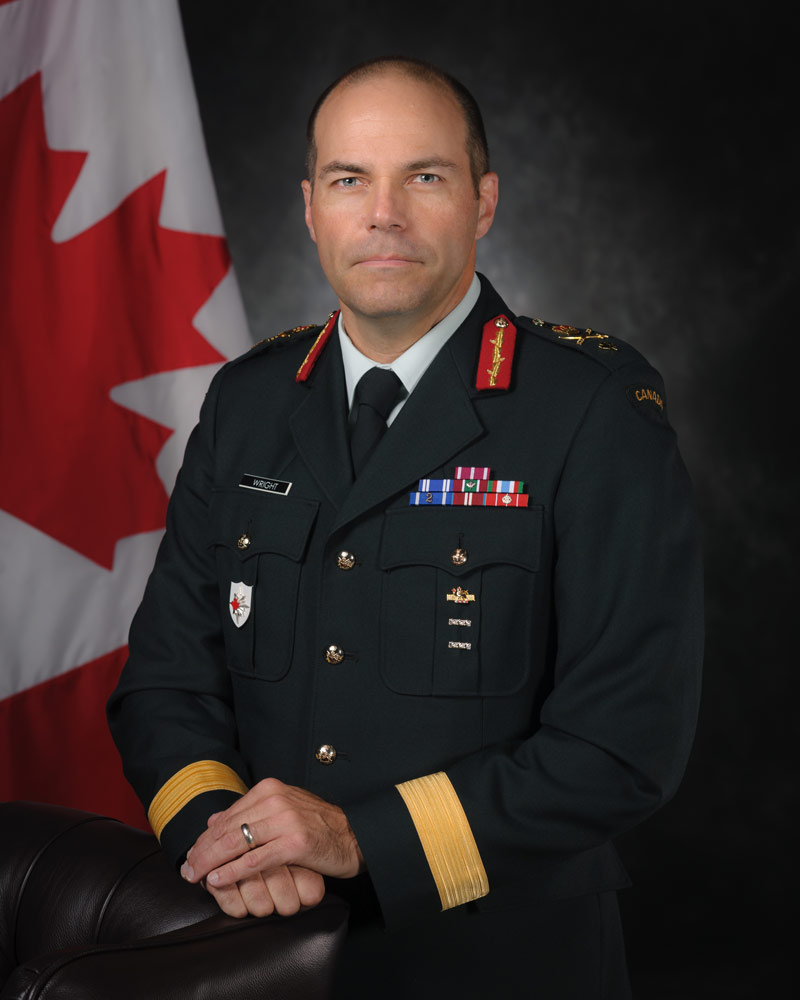 Major-General Michael Wright, who earned a Medal of Military Valour (MMV) leading his infantry company out of a Taliban ambush in Afghanistan, says defence intelligence needs to focus on change and interoperability with its allies as well as national security.

The latter includes Russia and China, the “enduring threat” of violent extremist organizations and even climate change.

“It might be something you might not be used to hearing from a defence intelligence organization but climate change can cause food insecurity; it can cause migration,” Wright said in an interview with Legion Magazine.

Wright’s plate has been full since he took charge of Canadian Forces Intelligence Command last June.

“Frankly, we can look at the effects of climate change to determine where some of the areas where we’ll see conflict on the globe could be and, certainly, here in Canada, climate change is having an impact on the number of domestic operations which the Canadian Armed Forces is being called upon to respond.”

Most recently, Canadian military resources were deployed to aid in evacuations and relief during flooding in British Columbia.

Needless to say, Wright’s plate has been full since he took charge of Canadian Forces Intelligence Command last June. The job of defence intelligence chief comes with the appointment.

Already, he’s hosted a meeting of Five Eyes defence intelligence leaders in Quebec, which he says reinforced the partnership.

The Five Eyes—Canada, the United States, Britain, Australia and New Zealand—is a longstanding intelligence alliance with roots in informal meetings conducted in secret by British and American codebreakers during the Second World War.

Some trace its emergence to Winston Churchill’s landmark Iron Curtain speech in which the wartime prime minister warned in 1946 of open conflict with the Soviet bloc without a “continuance of the intimate relationship between our military advisers, leading to common study of potential dangers.”

The intelligence-sharing arrangement was formalized in the 1960s to monitor communications among East Bloc nations. It now monitors communications worldwide.

Questions were raised, however, after the U.S., Britain and Australia signed the AUKUS pact, a September 2021 agreement to support development of an Australian nuclear-propelled submarine fleet and other military cyber capabilities, including artificial intelligence, quantum technologies and undersea monitoring.

The deal agitated the Chinese, who accused the three of fostering a Cold War mentality. French foreign minister Jean-Yves Le Drian called the pact a “stab in the back” and Paris recalled its ambassadors from Australia and the U.S. after Canberra cancelled an C$80-billion submarine deal with the French, sans notice.

The agreement was also widely criticized for excluding New Zealand, an important regional ally, and Canada. It was presumed by some that both were left out because of their nuclear-free policies.

Prime Minister Justin Trudeau all but dismissed any concerns raised over Canada’s exclusion from AUKUS.

“We continue to be strong members of the Five Eyes, and continue to share information and security approaches with our partners,” he said shortly after the deal was announced.

“This is a deal for nuclear submarines, which Canada is not currently or any time soon in the market for; Australia is. We will continue to work alongside our partners to ensure…that we’re keeping ourselves safe, that we’re standing up against challenges, including those posed by China.”

Five Eyes leaders are increasingly calling out China’s behaviour in the region.

But AUKUS is cause to re-evaluate the Five Eyes partnership, William A. Stoltz, senior adviser for public policy at the National Security College, Australian National University, wrote on Jan. 6 for Canada’s Macdonald-Laurier Institute for Public Policy.

Five Eyes leaders are increasingly calling out China’s behaviour in the region, especially for stifling democracy and imposing oppressive security laws in Hong Kong. Stoltz said this marks a Five Eyes shift from a primarily ad hoc operational partnership to a strategic body focussing on joint action in the Indo-Pacific.

“At a geostrategic level, it is plain the AUKUS Pact is an expression by the United States and Britain of their expectation that Australia should play a larger role in asserting Western power in the Indo-Pacific,” Stoltz wrote.

“China and Russia are both actively seeking to reframe the international order in a way that fits their vision.”

Wright wouldn’t comment on the broad implications of the AUKUS pact on the Five Eyes, but he did say that “across defence intelligence organizations, the relationship is very strong.”

He said the main concern confronting his command are China and Russia’s efforts to “reshape the international order to a way that fits their world view.”

“Canada and our allies in the West have benefited from the rules-based international order that was largely established in the 1940s and China and Russia are both actively seeking to reframe the international order in a way that fits their vision,” he said.

The job involves a lot of liaison, diplomacy, deskwork and assessments.

“I am a big fan of James Bond movies, but I think there’s a lot of creative licence there,” he said.

The general served in all three Canadian mechanized brigade groups and deployed on operations with all three regular force infantry regiments since joining the Forces in 1990. He spent 11 years with 2nd Battalion, Princess Patricia’s Canadian Light Infantry, in Winnipeg and Shilo, commanding at the platoon, company and battalion levels, and served three years with 2nd Battalion, Royal 22nd Regiment.

The Oakville, Ont., native was awarded an MMV—Canada’s third-highest award for valour—for “outstanding courage and exceptional leadership in combat” in Afghanistan on the night of Aug. 19, 2006.

While conducting security operations in the Panjwaii District, his troops were suddenly surrounded and attacked by a numerically superior enemy force.

Under intense fire from small arms and rocket-propelled grenades from all directions, Wright refused to put reinforcements at risk and instead led his company as it outmaneuvred the attackers and inflicted heavy enemy casualties.

Said his citation: “His courage and his leadership led to the defeat of a much larger enemy force without a single Canadian Forces casualty.”