More than 40 million people displaced in 2020 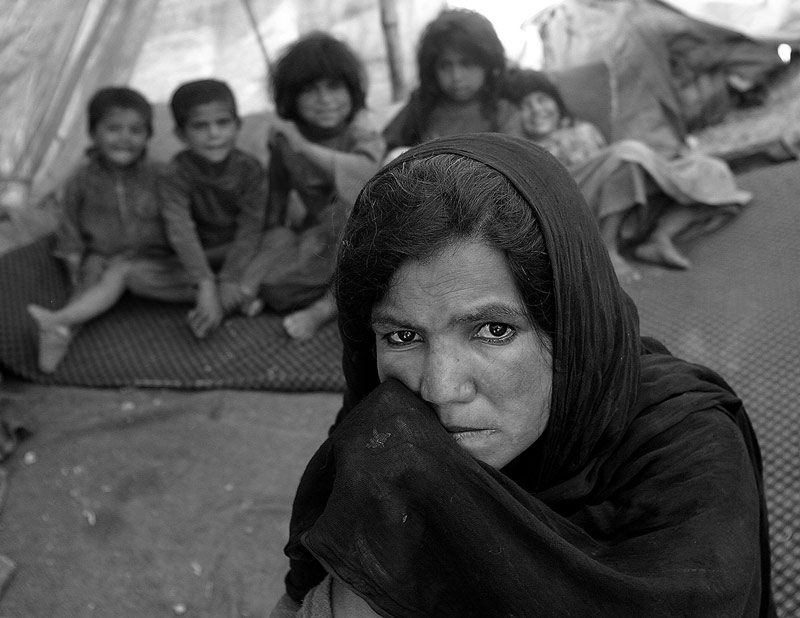 A war widow with her children in an internally displaced persons camp on the edge of Kabul in 2003. Afghanistan has consistently figured among the countries most affected by displacement due to war for 20 years.
Stephen J. Thorne
War, violence and so-called natural disasters, many related to climate change, forced 40.5 million people to relocate within their own countries in 2020—the most in more than a decade, the world authority on such movements reported on May 20.

By year’s end, 55 million people were living in internal displacement.

At 30.7 million, disasters accounted for the most displacements, the bulk of them (30 million) weather-related, said the Internal Displacement Monitoring Centre, which has tracked and analyzed the forced relocations of populations since 1998.

In assembling its annual report, the Geneva-based centre found that almost 10 million people had been internally displaced by armed conflict (7.5 million), violence (1 million) and other threats (1.2 million) in 2020.

By year’s end, 55 million people were living in internal displacement—48 million of them as a result of conflict and violence in 59 countries and territories. 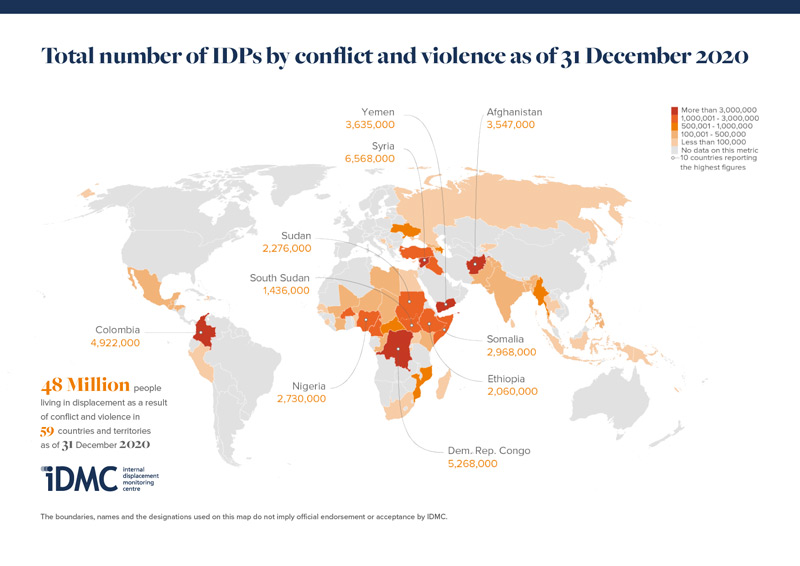 Total number of IDPs by conflict and violence as of Dec. 31, 2020.
IDMC
“Never in IDMC’s history have we recorded more people living in internal displacement worldwide than we do today,” said the centre’s director, Alexandra Bilak.

Internally displaced persons, or IDPs, are distinct from refugees in that, unlike refugees, they have not crossed international borders to escape whatever has threatened or uprooted them.

Last year, significant numbers of people in 149 countries were displaced, led by more than five million in China, all due to disasters (mainly floods). There were 4.5 million displaced in the Philippines and 4.4 million in Bangladesh, both due mainly to disasters.

Congo recorded almost 2.5 million new IDPs; over 2.2 million of them were due to ongoing war, more than any country in 2020. War-torn Syria, with about 1.8 million conflict-related IDPs, and Ethiopia, with 1.7 of two million IDPs caused by escalating extremist violence, were next on the small list of countries where conflict and violence were the main unsettling factors.

“Most new displacements triggered by conflict and violence in 2020 were recorded in sub-Saharan Africa and the Middle East and North Africa,” said the report.

“Internal displacement crises spread to previously relatively unaffected areas of sub-Saharan Africa in 2020, while longstanding upheaval in others was aggravated by the emergence of new armed groups and escalating violence.”

Disasters fall into two categories—geophysical (2.1 per cent), which include earthquakes and volcanic eruptions, and weather-related (97.9), which includes floods, wildfires, landslides, extreme temperatures and droughts. 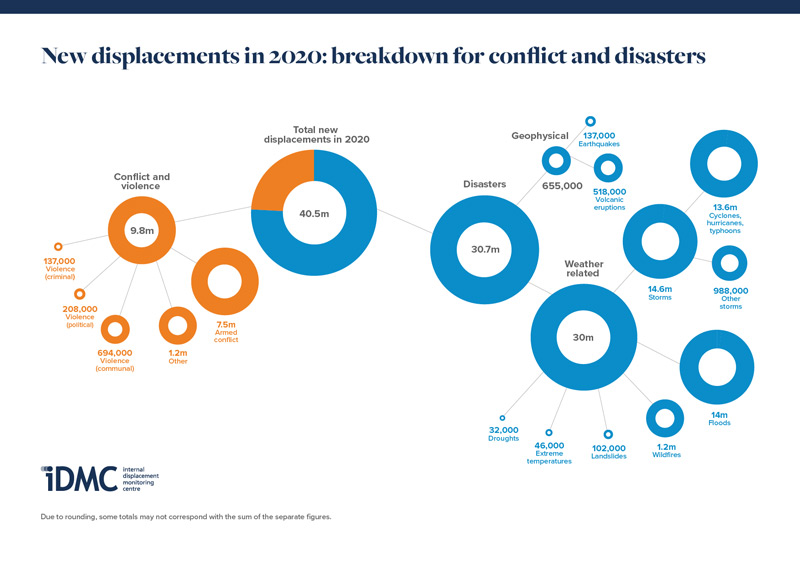 New displacements in 2020: breakdown for conflict and disasters.
IDMC
Most disaster-related displacements last year were recorded in South and East Asia and the Pacific:

In the Americas, disasters accounted for the vast majority of new displacements in 2020, at 4.5 million, the highest in a decade. The report said Honduras, Guatemala and Nicaragua suffered unprecedented displacements as a result of the most active Atlantic hurricane season on record.

“A number of countries now recognise it as an issue of national and global priority.”

Sub-Saharan Africa, where 4.3 million people were uprooted by disasters, suffered “unusually long and intense rainy seasons,” according to the report, which caused flooding and further displacements in areas already affected by violence.

“There have been significant advances in the development of national and regional policies on disaster displacement and climate-related migration, and global attention on the issue is growing,” said the document.

“A number of countries now recognise it as an issue of national and global priority. Implementation, and assessing progress in doing so, are the next priorities.”

The authors said “filling the data gaps on displacement associated with disasters and climate change is essential” to achieving a sustainable development agenda.

The centre’s report focuses mainly on new displacements, and not necessarily permanent or long-lasting ones.

By Dec. 31, those living in displacement due to war and conflict included over 6.5 million in Syria, almost 5.3 million in Congo, more than 4.9 million in Colombia, some 3.6 million in Yemen and 3.5 million-plus in Afghanistan.

“More than 23 million people under the age of 18 were internally displaced worldwide, with significant impacts on their education,” said the report. “The global cost of one year of displacement was $20.5 billion in 2020.” 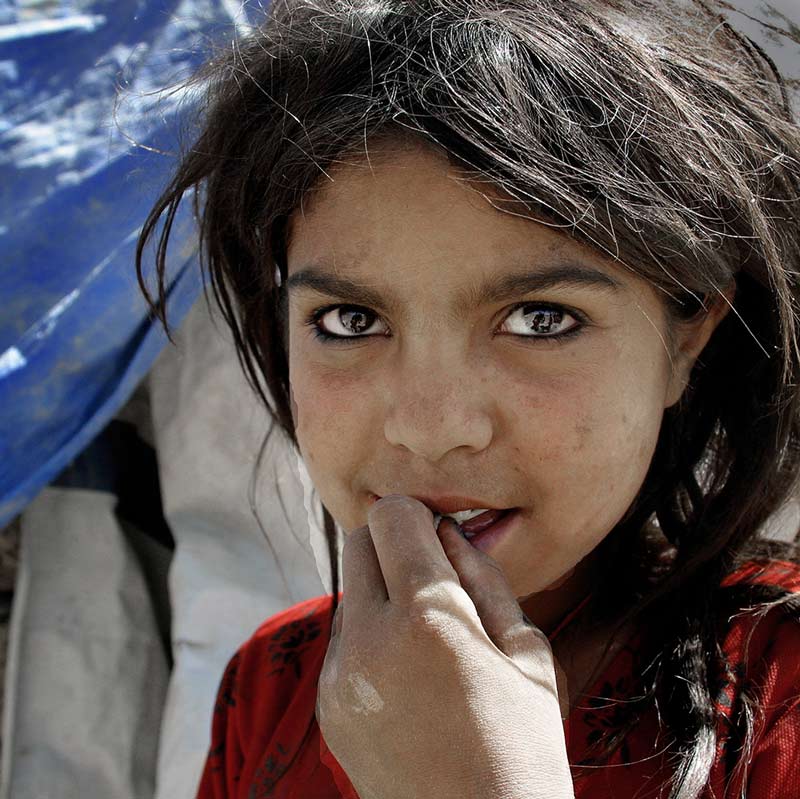 An internally displaced child wanders a tent camp on the side of a hill at the edge of Kabul in 2003. The camp was populated by Afghan doctors, lawyers, judges, war widows and others, along with their families, displaced by war.
Stephen J. Thorne
That figure, it said, includes “the costs of providing people displaced by conflict and violence with support for their housing, education, health and security, and accounts for their loss of income.”

“The COVID-19 pandemic heightened IDPs’ needs and generated new risks in 2020,” it added, “while creating significant operational and financial challenges for governments and their humanitarian partners.”