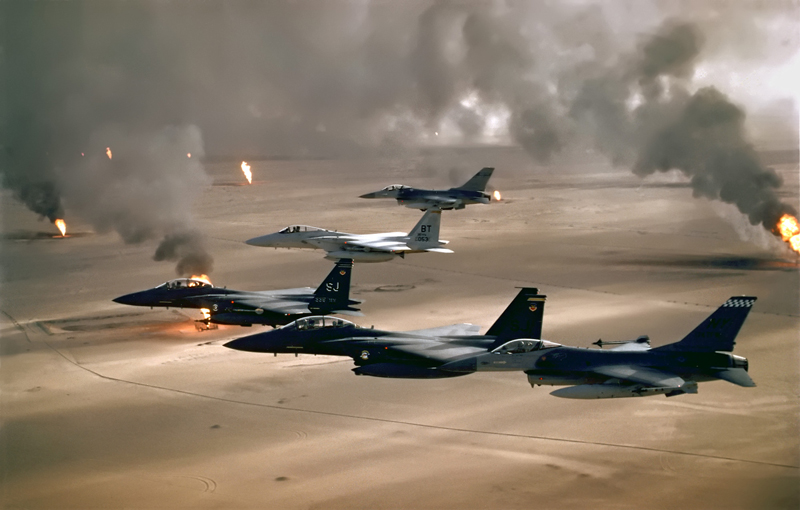 A new scientific study claims sarin gas is a likely cause of Gulf War illness, not debris from depleted uranium munitions.

The University of Portsmouth School of Earth and Environmental Sciences says it has proven that depleted uranium did not cause the acute and chronic symptoms plaguing more than 250,000 Allied service personnel.

“The plausibility of the link between depleted uranium and the illness has bubbled along now for nearly 30 years, but we would argue it’s time to look elsewhere,” said Randall Parrish, a professor of isotope geology at the school in the south of England.

He pointed to the widespread destruction of Iraqi weapons caches by Allied troops and the likely presence of sarin gas, a nerve agent, as the prime suspect.

The Gulf War was the first conflict in which depleted uranium munitions were used. Allied forces expended about 320 tonnes of them during the brief 1991 fighting to oust Saddam Hussein’s Iraqi forces from Kuwait.

More than 5,100 members of the Canadian Forces were deployed in the region at the time, half of them on the battlefield’s periphery during combat operations.

After the fighting ended, Canadian combat engineers were posted alongside a U.S. Army camp housing an ammunition storage site that was destroyed by a series of accidental explosions involving several tonnes of munitions containing depleted uranium. Many troops were exposed to dense smoke laced with related aerosols.

Depleted uranium was also used in Bosnia in 1994–1995 and in Kosovo in 1999, where Canadians served with United Nations and NATO forces, respectively.

Dozens of veterans of those missions have since suffered from a variety of acute and chronic symptoms, including fatigue, headaches, joint pain, indigestion, insomnia, dizziness, respiratory disorders and memory problems.

The maladies affecting up to a third of those who served in the Gulf appear rooted in neurological impairment. Investigations into their causes have considered potential exposures to low-level chemical warfare nerve agents, pyridostigmine bromide anti-nerve agent medication, pesticides, multiple immunizations and combat stress.

Depleted uranium, used in armour-piercing munitions and some tank armour, was singled out as a likely culprit due to its toxic and mildly radioactive qualities.

But, like the researchers at Portsmouth, a June 2013 report by the Canadian Parliament’s standing committee on veterans’ affairs cited several studies that found no evidence of depleted uranium in the bodies of sufferers.

In Canada, the issue came to the fore at the end of the 1990s. Still, the Canadian report said, “various studies subsequently refuted the existence of a link between [depleted uranium] and certain medical conditions afflicting veterans.”

“The scientists who appeared as witnesses before the Committee all supported the report’s conclusions that it was unlikely that the medical conditions afflicting a number of veterans had been caused by [depleted uranium] exposure,” it said.

“They told the committee that research in this area was now conclusive enough that it would be more constructive for veterans to have scientists look elsewhere for the causes of certain poorly understood medical conditions, and for the medical community to offer treatment adapted to the needs of veterans, regardless of whether the causes of their conditions were known or not.”

While VAC, therefore, doesn’t recognize Gulf War illness in and of itself, it does compensate veterans suffering from the symptoms commonly associated with it.

They found not a single trace of depleted uranium in any of the samples.

The new study, conducted by Parrish and Robert Haley of the University of Texas Southwestern Medical Centre in Dallas, is published in the journal Scientific Reports.

Parrish developed a method of detecting depleted uranium in urine from historical exposure using high-sensitivity mass spectrometry that is 10 times more sensitive than previous procedures. The measurements were adjusted to take into account the substance’s likely metabolic decline over time. 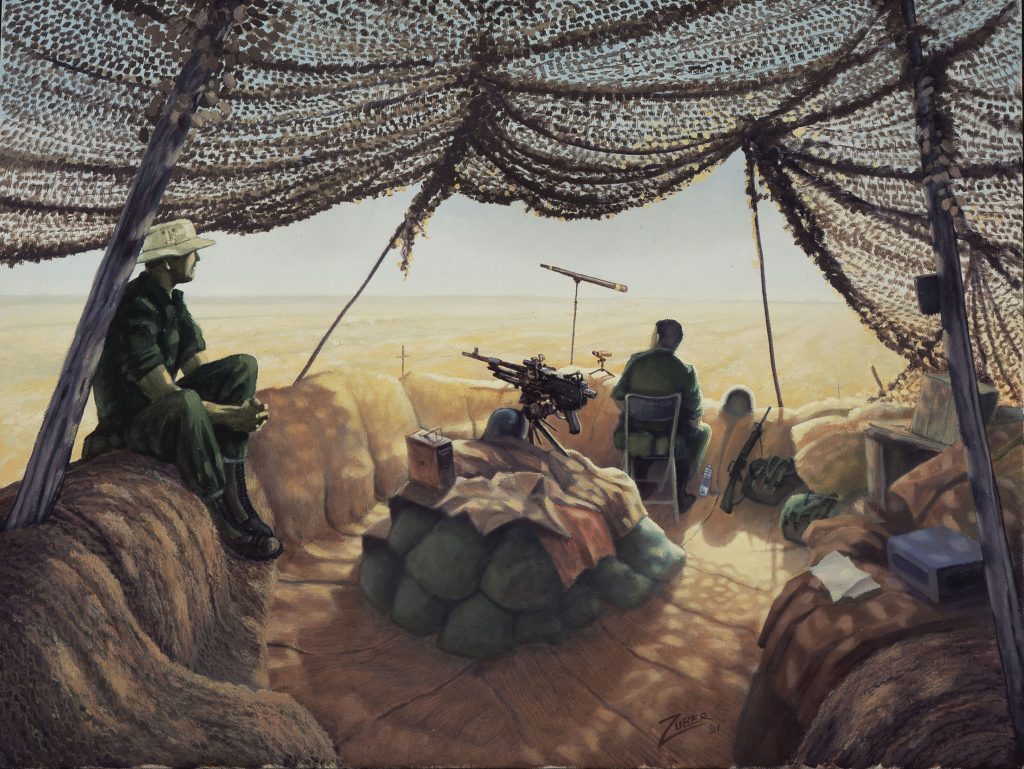 Canadian troops keep watch in Ted Zuber’s 1991 painting, “Long Day at Doha.”
Ted Zuber/Beaverbrook Collection of War Art/CWM/19960062-006
The researchers tested 154 well-monitored American Gulf War veterans who have the illness. They found not a single trace of depleted uranium in any of the samples.

“That depleted uranium is not and never was in the bodies of those who are ill at sufficient quantities to cause disease will surprise many, including sufferers who have, for 30 years, suspected depleted uranium may have contributed to their illness,” said Parrish.

Furthermore, they found no differences between the veterans and a control group, who weren’t on the battlefield.

He said the most likely cause for the illness is widespread exposure to low levels of sarin nerve agent—widely released when troops and aircraft destroyed caches of Iraqi chemical weapons in January 1991. The effects were possibly compounded by organophosphate anti-nerve agent medication and the liberal use of pesticides to prevent malaria exposure among Allied forces, he added.

Richard Delve, a cook with the Canadian Support Unit, developed ulcers and Crohn’s disease after serving in the Gulf. He had a liver transplant in 2011 and lost his colon and large intestine in 2014. He shed 65 pounds in the process.

Parrish said his study will narrow the focus of future research into the causes of Gulf War illness.

Delve was medically released in July 2005 just months shy of 20 years’ service. He has long suspected the barrage of inoculations he received before deploying contributed to his health issues.

“We were given so many injections before we went over there and, basically, we were given them all at one time,” he said in a recent interview with Legion Magazine.

“They said they were safe but, yeah, they’d never been given in that short a time in that combination before. Had they ever been tested like that? And then the pills we had to take when we were over there…for possible chemical attacks, plus all the other pills we had to take.”

“Finding causes is a nebulous game when you have so many options to blame.”

Among the pharmaceuticals the Canadians were given was the controversial malaria drug mefloquine. However, the weekly regimen was cut short and replaced by another drug that Delve said contained a warning “not to be taken in extreme heat or direct sunlight.”

“We were in the middle of a frickin’ desert.”

Parrish said his study will narrow the focus of future research into the causes of Gulf War illness.

“Being able to debunk the alleged connection between this illness and this radioactive substance allows the medical community to focus more clearly on what the likely causes actually are,” Parrish said.

“Finding causes is a nebulous game when you have so many options to blame. The Allies’ own activities destroying an Iraqi nerve agent cache or spraying pesticides liberally on troops could be seen in hindsight as an inadvertent ‘own goal’ and one to be avoided in future conflicts.”

PrevPrevious ArticleBoarding parties in the Persian Gulf
Next ArticleTake your shot—we did, says Gulf War vetNext