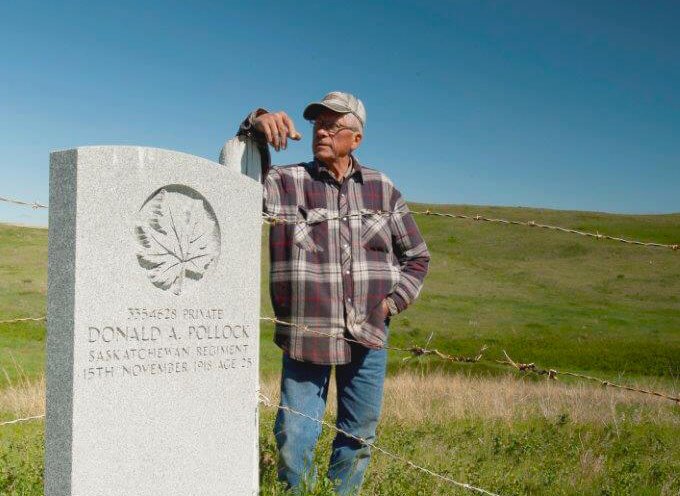 “Canada Only” is written in red ink on his brief service record, which states the five-foot, six-and-a-half-inch, 127-pound soldier was discharged in December 1918 “in consequence of having died.”

Pollock, a chronic asthmatic, had contracted Spanish flu, brought it home to his remote Saskatchewan homestead, and passed it on to his twin brother Alexander.

The two died the same day—Nov. 15, 1918. They are buried side-by-side in a secluded spot on the old family homestead, Pollock under the familiar grey headstone administered by the Commonwealth War Graves Commission; his brother memorialized by a private marker.

Finding the Pollock brothers’ final resting place is best achieved with the help of the current landowner, George Carlson says a profile written as part of the commission’s new “To the Four Corners” program, an interactive website that tells stories like the Pollocks’ and takes viewers on virtual tours of its memorials and war graves around the world.

Dominique Boulais, who recently inspected the Pollock site on behalf of the commission’s Canada and Americas Area, said an ATV ride with Carlson saved him “hours of traipsing about with a GPS.”

“There was only one padded seat and it was for the driver,” Boulais said. “I sat on the steel grill facing the back receiving all the mud flying from the rear wheels and breathing the fumes from the exhaust pipe.”

Eventually, they reached the gravesite, located in a dip between folds in the land. “There wasn’t a single sound except the wind.”

The story highlights not just the plight of a single soldier but demonstrates the lengths and distances commission personnel go to preserve the memory and dignity of Commonwealth soldiers. 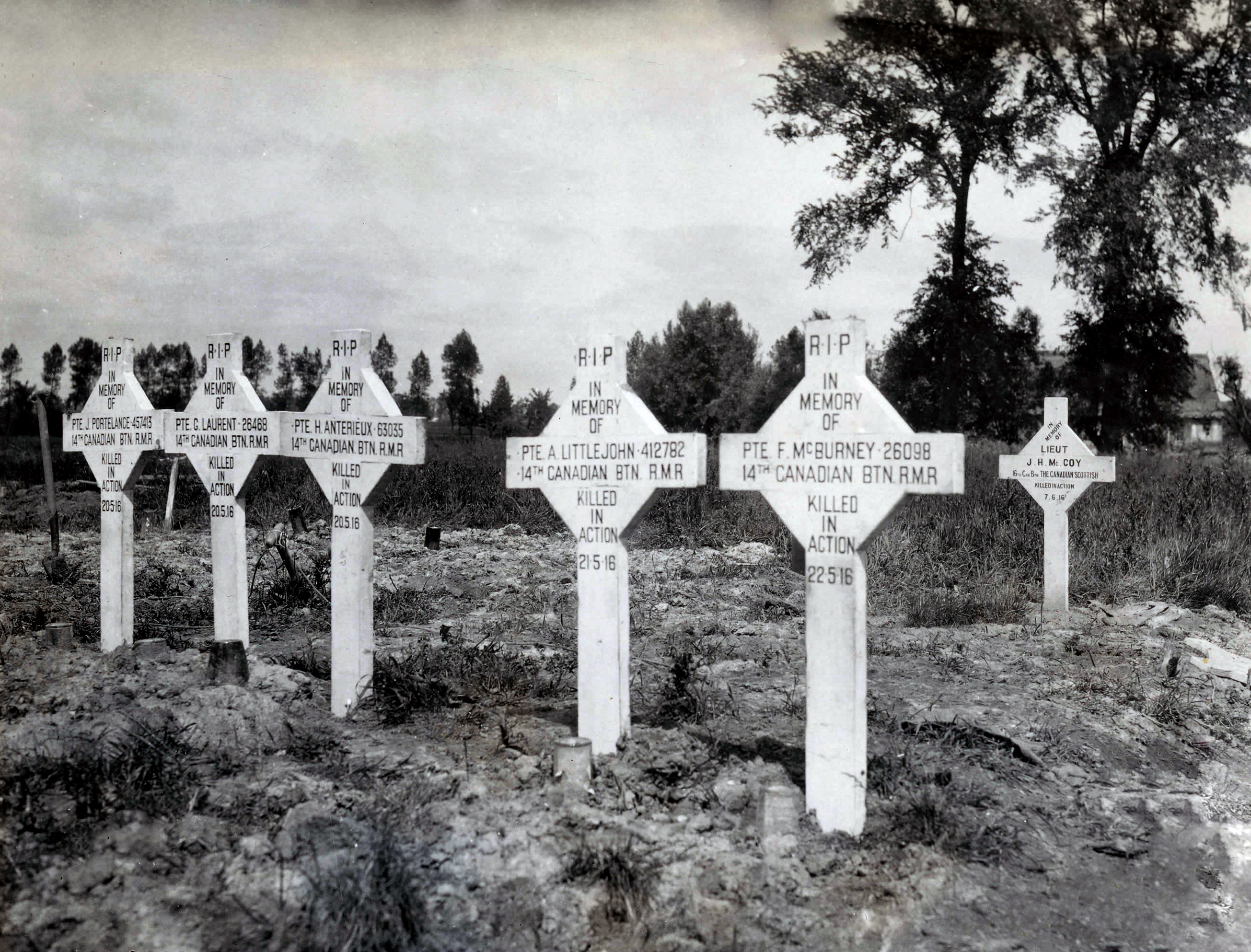 Canadian war graves near Ypres, Belgium. The crosses identify the graves as those of soldiers of the 14th Canadian Battalion who were killed over several days in May 1916.
LAC/PA-000176
For more than a century, the commission has tended war graves the world over, beginning with the First World War and, since 1945, the Second, as well. That’s some 1.7 million war dead in 150 countries.

There are 110,000 Canadians among them—the vast majority buried close to where they fell. It wasn’t until the 1960s—and notably, during the Afghanistan war—that Canada started bringing its war dead home.

Many others, however, died as the result of war wounds, illnesses and other war-related causes and are thus buried in Canada—almost 19,000 commission-administered graves, in fact, located in nearly 3,000 cemeteries across the country. About 1,900 of those cemeteries have just a single war grave. Veterans Affairs Canada administers another 228,000 gravesites within the country’s borders, many of them soldiers, sailors or air crew who died outside the time period for which they would fall under the commission’s responsibility.

“It’s pretty mind-boggling when you actually think about it,” says David Loveridge, a former Canadian military helicopter pilot who is the commission’s director for Canada and the Americas.

“If you go to your local cemetery, there’s probably a war veteran buried there. When you look at the geographic spread, not only of our entire area, but also within Canada, it’s a large task.” 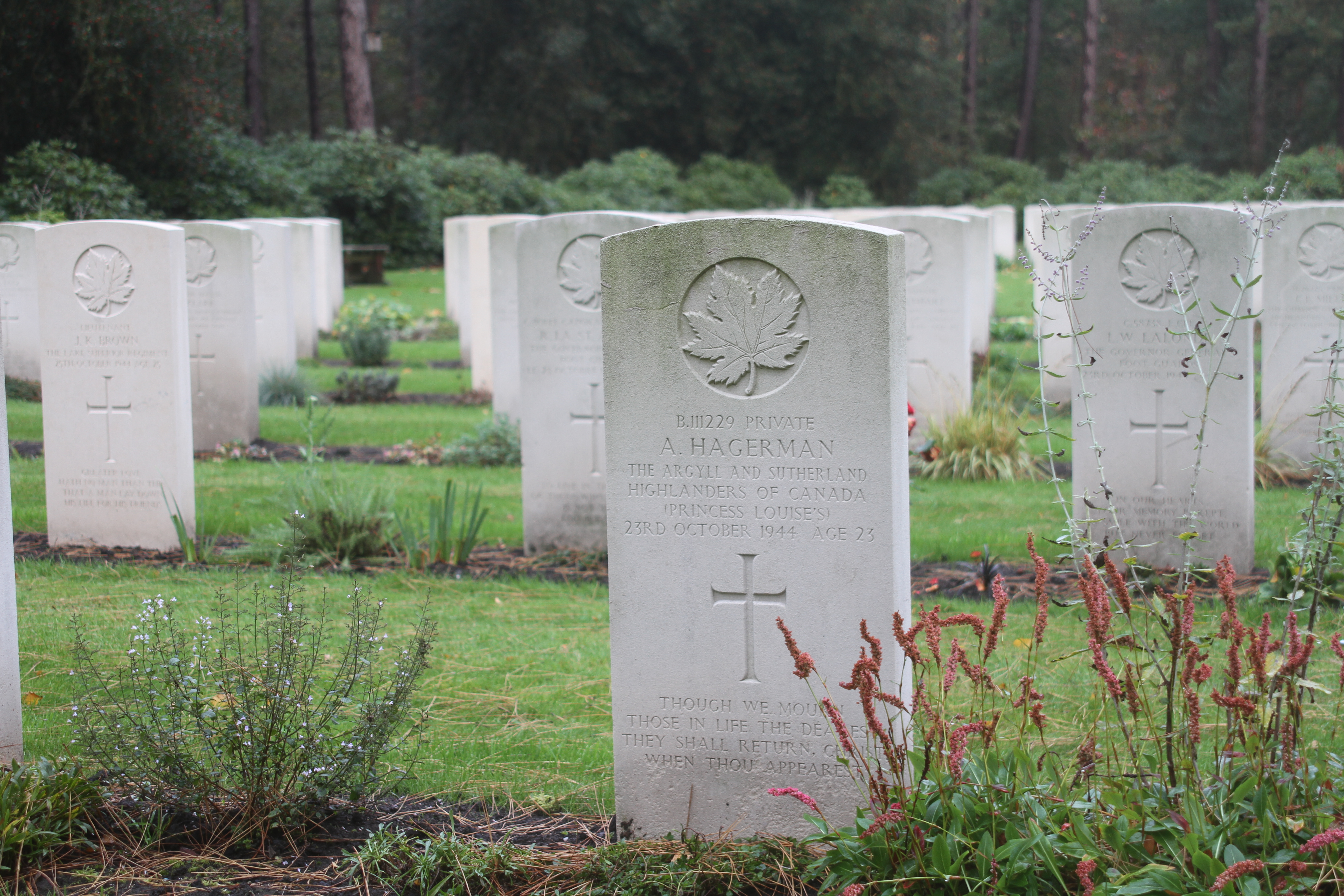 The grave of Private Andrew Hagerman of the Argyll and Sutherland Highlanders of Canada. He is buried at the Bergen-Op-Zoom Canadian War Cemetery in the Netherlands.
Adam Tindal / Legion Magazine
Following the year-long commemorations marking the 100th anniversary of the end of the First World War the 75th of the Second, Loveridge says the commission noted that a disproportionate amount of attention had been focused on the war dead of Western Europe, largely overlooking significant sacrifices of combatants and the commission’s work in other theatres.

The commission’s new Four Corners website features stories, videos and pictures of some of its most remote sites located on every continent except Antarctica.

“From jungle to desert; from isolated islands to hundreds of miles inside the Arctic Circle, the work of the Commonwealth War Graves Commission stretches to the four corners of the world, far beyond the former battlefields of Europe,” says a news release announcing the program.

“With the help of these virtual tours, the commission invites Canadians to experience the hard-to-reach places it still goes to remember the war dead. Fallen Canadian servicemen and women are scattered across the globe, from the Netherlands to Japan, from Turkey to Hong Kong, from Russia to Italy.” 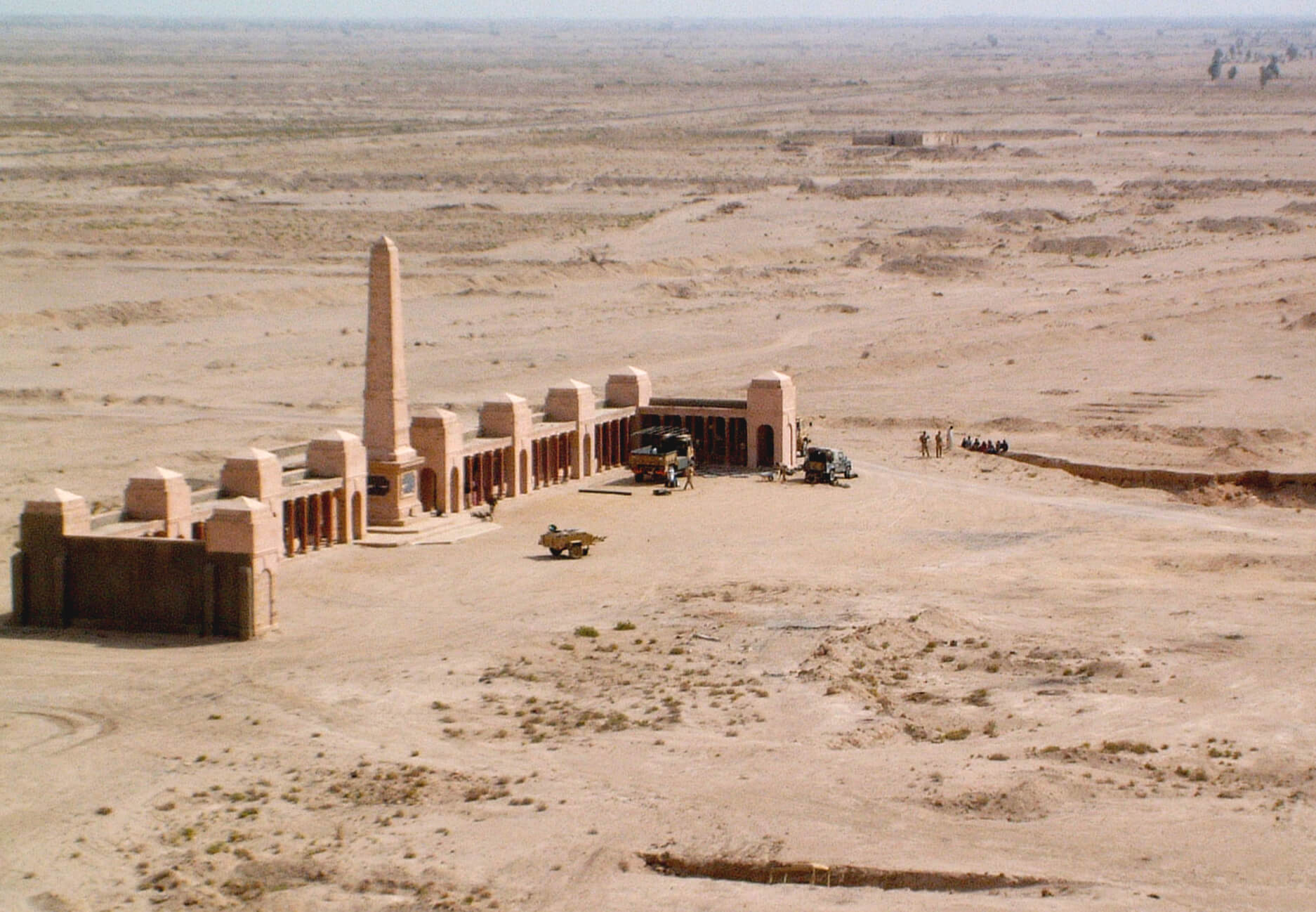 The Basra Memorial in Iraq commemorates 40,682 Commonwealth forces—99 per cent of them from India—who died in the Mesopotamian Campaign of the First World War.
CWGC Four Corners
The commission administers 19 sites in Iraq and most have deteriorated or been damaged due to more recent wars. During the First World War, when it was still Mesopotamia, Iraq was the scene of the British Empire’s largest operations outside of Europe. It suffered its worst defeat in the Siege of Kut.

The commission’s work within Iraq’s borders has stopped and started numerous times since it formally withdrew from the country in 1990. Sites have deteriorated as the salty soil has seeped into headstones, making them so brittle they crumble.

Iraq’s largest memorial, the Basra Memorial, was moved into the desert in the late-1990s from its original site on the banks of the Shatt al-Arab River. Now, after decades without regular maintenance, the memorial is showing signs of age and neglect. The commission site says the memorial is missing 30,000 names.

“When [it was] first unveiled in 1929, the names of most of the men of the Indian Army who it commemorates were not accurate,” says the commission. “Records at the time hadn’t been properly compiled and the commission could only be provided with the names of Indian officers, and British officers and men. 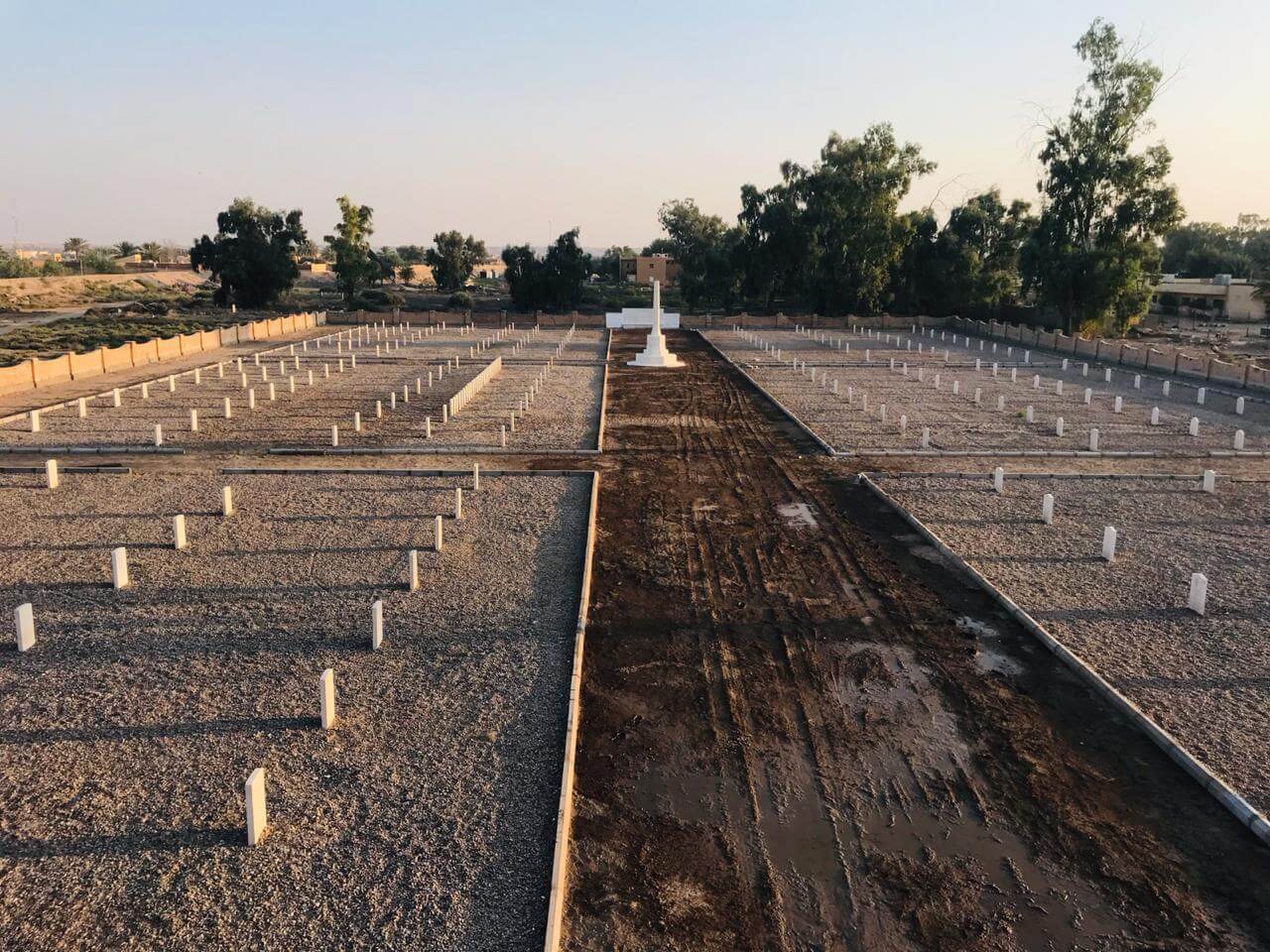 The war graves commission has installed 300 new headstones at Habbaniya War Cemetery in Iraq.
CWGC Four Corners
“Since then, an accurate list of the names has been compiled and all lie in the CWGC’s Iraq Roll of Honour, on display in the U.K., waiting for a time when conditions on the ground allow a more permanent solution.”

The war graves commission has made some progress in Iraq. During a gap in hostilities in 2012, it renovated Kut War Cemetery. In 2019, it renovated the cemetery on the former RAF base in Habbaniya, now occupied by the Iraqi army, and installed nearly 300 new headstones.

“The commission has to play the long game at times,” it says. “When your task lasts forever, you never know what progress the future might bring.”

Visit the To The Four Corners website at https://fourcorners.cwgc.org.