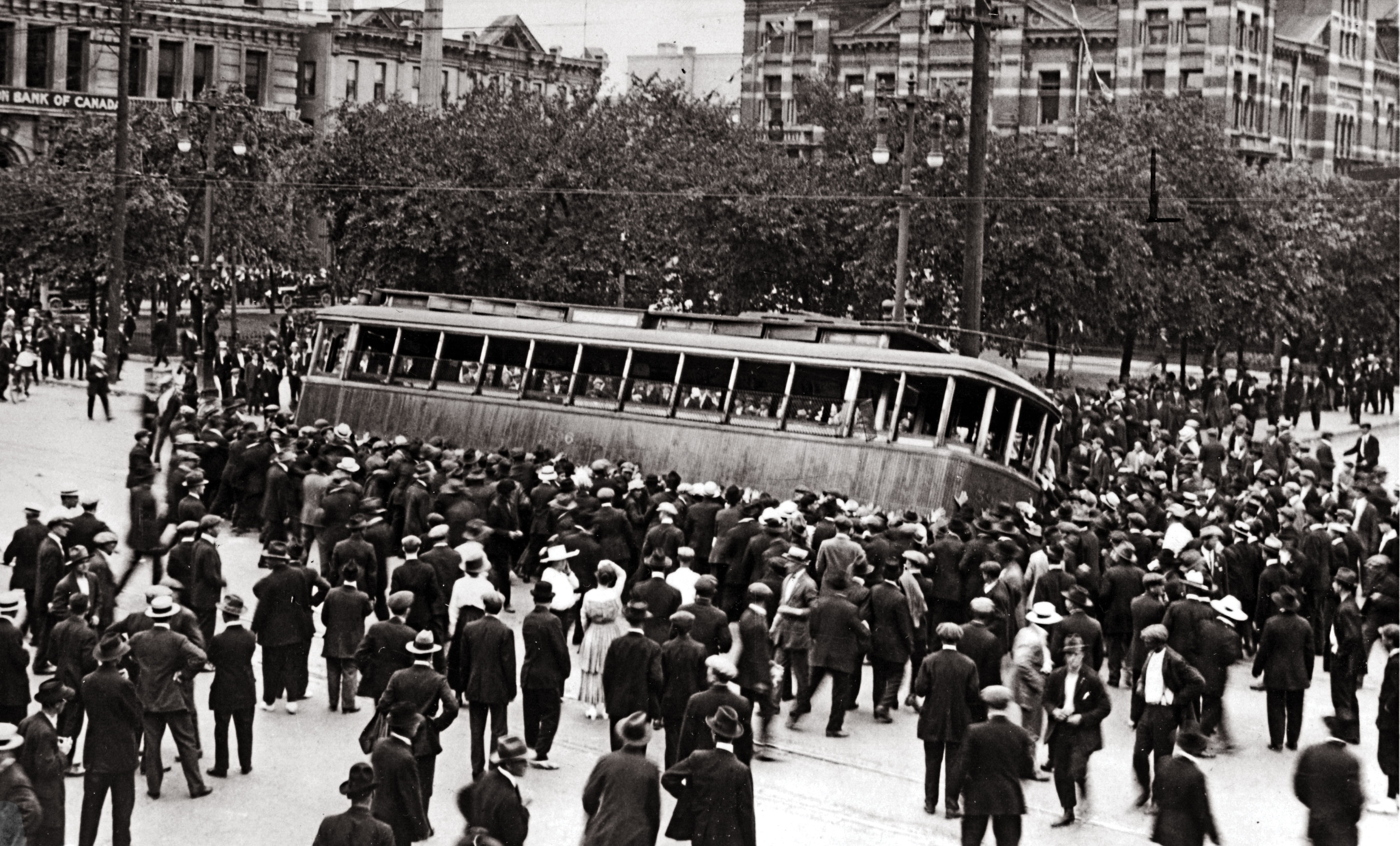 Angry men pour into the streets of Winnipeg after more than 30,000 workers walked off their jobs on May 15, 1919, beginning the Winnipeg General Strike.
LAC/PA-202200

In Germany I fed on grass and rats. I would prefer going back to eating grass than give up the freedom for which I fought so hard and suffered so much.”

This outburst, voiced by a First World War veteran in Western Labour News, captures all too well the disillusion and bitterness felt by him and many of his colleagues following the First World War. During the war, they had dreamed of finding a “brave new world” upon their return to Canada, a world in which they would find good jobs and a greater voice in decision-making. Instead, they found rampant unemployment, soaring inflation and widespread industrial unrest.

This labour unrest would reach a peak in Canada’s best-known and largest general strike, the Winnipeg General Strike, which crippled Canada’s third-largest city in May and June of 1919. Among its participants were returned war veterans. Some of these had arrived home wounded and in a mentally fragile state while others had returned from the front suffering from tuberculosis and venereal disease. With marriages tottering, factories closing and no unemployment insurance, the plight of these men became desperate.

Furious about their inability to find work, many jobless veterans directed their frustration at recent immigrants who, they felt, had taken jobs that rightfully belonged to them. “They say one of our leaders was a German,” remarked Helen Armstrong, the daughter of a Socialist tailor from Toronto and the wife of a Winnipeg General Strike leader, George Armstrong. “I don’t care what a man is if he is whole under the skin and a worker. The only enemy alien we have in Canada is the capitalist and the strike breaker.”

Historian James Naylor has labelled returning veterans the “wild card” in Winnipeg’s general strike. Some joined the Loyalist Veterans’ Association, a group opposed to the strike. It was much in evidence on June 4, 1919, when many of its members were addressed by Charles Gray, Winnipeg’s mayor, in front of city hall that was fittingly bedecked with placards reading “Down With Bolshevism,” “We Stand By Our Elected Government,” and “Canadian Corps Fall In.”

Other veterans, however, supported the strike. In fact, it was the actions of First World War veterans that precipitated what became known as “Bloody Saturday,” the turning point of the infamous strike. Flouting Gray’s proclamation that no parades would be tolerated, veterans staged a silent parade to protest the “denial of free speech” and “the Russian methods adopted by the present government.” Little could they have known that their parade would unleash violence. 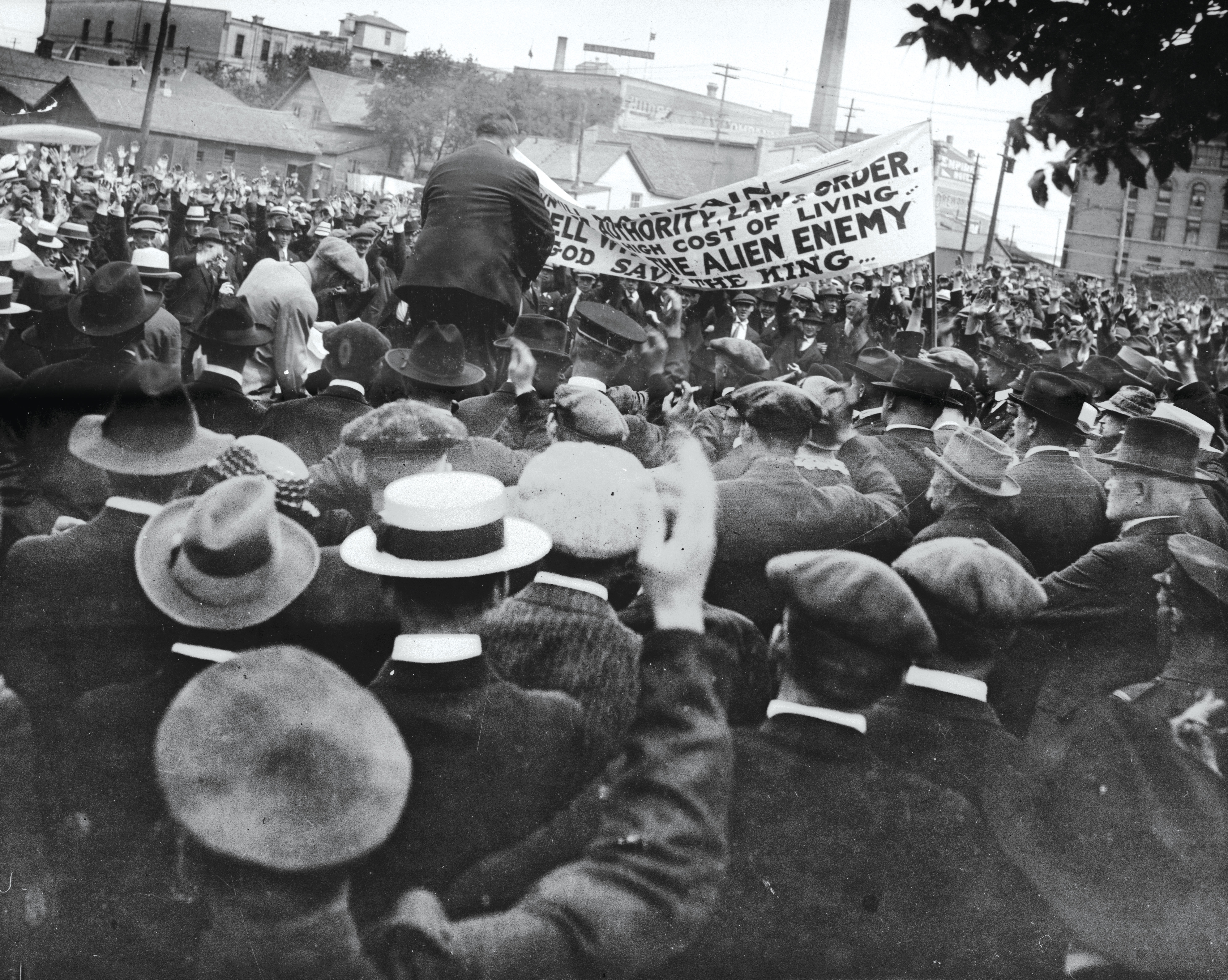 The crowd turns violent on June 21, 1919, overturning a street tram and later setting it ablaze. It would become known as Bloody Saturday.
Winnipeg Free Press/Manitoba Archives/2396986

One who witnessed this violence was Tommy Douglas, the Canadian icon who later introduced universal health care. Douglas, who had recently arrived from the gritty Scottish city of Glasgow, was only 14 years old on June 21, 1919, when he found himself thick in the events of Bloody Saturday.

He and “several other young fellows” had climbed to a building’s rooftop to watch developments unfold in Market Square in front of Winnipeg’s city hall. There, the scrappy youngster and his pals saw a crowd overturn a tram and set it ablaze. They also watched red-coated North West Mounted Police gallop down Winnipeg’s Main Street, firing as they charged the crowd, and some 50 mounted special militia hired to replace striking city police, called “Specials,” attack demonstrators with baseball bats. This government-ordered intervention effectively crushed the strike, but not until days later was it officially declared ended.

By the time the clash was over, one striker was dead, a dozen more had been injured and 30 had been arrested. Among those bundled off to jail was Scottish-born Robert Russell, a militant machinist in the CNR shops who had helped to spearhead the formation of the radical One Big Union in Calgary in March 1919. Although he had argued against the metal workers’ strike, the general strike’s immediate trigger, authorities regarded him as its mastermind and sentenced him to two years in prison. James Shaver Woodsworth, the minister to Douglas’s family and a strike supporter, was also arrested.

The strike broken, most workers returned to their jobs and set about rebuilding their unions. Some even abandoned direct action for politics. A sprinkling of labour leaders were immediately elected to city council. Others were elected to the Manitoba legislature and, in the case of the Reverend J.S. Woodsworth, to the federal Parliament in 1921.

Decades later, Douglas would recall these developments, observing that the Winnipeg General Strike had left “a very lasting impression” on him. But it was not until the Estevan, Sask., riot of 1931 and the Regina riot of 1935 did he perceive what he claimed to be a pattern in these strikes. “Whenever the powers that be can’t get what they want, they’re always prepared to resort to violence or any kind of hooliganism to break the back of organized opposition,” he told Lewis H. Thomas, editor of Douglas’s recollections.

The violence that erupted on June 21, 1919, probably surprised many because the general strike originated in a peaceful effort by men in the building trades to obtain higher wages and, most importantly, by those in the metal trades to secure collective-bargaining rights. When faced by implacable opposition to their demands, the two groups presented their case to the umbrella organization of the city’s trade unions, the Winnipeg Trades and Labour Council. It then called for a vote on a general strike.

An overwhelming majority of workers voted to strike and, late in the morning of May 15, more than 30,000 of them walked off the job. Trams, elevators and mail delivery stopped, stores and factories closed, newspapers ceased publishing and telephone service came to a halt.

The orderliness of the early days of the strike owed a lot to the advice its leaders, many of whom were British immigrants, gave to the workers. In an article he wrote for the Western Labour News, the strikers’ newspaper, labour activist Fred Dixon urged the strikers to “hold your horses. This is the hour when you can win…. Don’t carry weapons. Leave this to your enemies. Continue to prove that you are the friends of law and order.” Heeding advice like this, the strikers eschewed violence and maintained essential services. But tensions soared after the police refused to sign an anti-strike pledge and the city replaced them with 1,800 untrained “Specials.”

Equally inflammatory were the actions of the federal government. It dispatched a handful of union leaders to prison (among them was Dixon, who was charged with sedition), pushed an act through Parliament empowering the government to deport British subjects without due process, and implemented Section 98 of the Criminal Code of Canada that broadened the definition of sedition.

Although the strike committee insisted that it aimed only to achieve the recognition of union rights, the mere fact that it acted as a quasi-government throughout the strike alarmed the city’s establishment. With memories of the 1917 Russian Revolution still very fresh, prominent citizens formed the Citizens’ Committee of One Thousand to oppose the strike and organize volunteers to maintain emergency services. Through its own newspaper, Citizen, the Citizens’ Committee began hurling insults at the strikers, calling them “Bolsheviks” and “bohunks.”

“No thoughtful citizen,” the newspaper claimed, “can any longer doubt that the so-called General Strike is in reality revolution—or a daring attempt to overthrow the present industrial and governmental system.”

These fears were shared by Canada’s Union government, which began to think that Canada might be ripe for Bolshevism. Disturbances involving soldiers and workers in British Columbia bolstered these fears even before the general strike. Sir Thomas White, the acting prime minister, was so alarmed by these developments that he cabled Sir Robert Borden, then in Paris (see page 94), requesting him to urge the British government to send a warship to Vancouver or Victoria.

When later that spring trouble struck Winnipeg, Arthur Meighen, minister of the interior and acting justice minister, opined, “The leaders of the general strike are all revolutionists of varying degrees and types, from crazy idealists to ordinary thieves.” 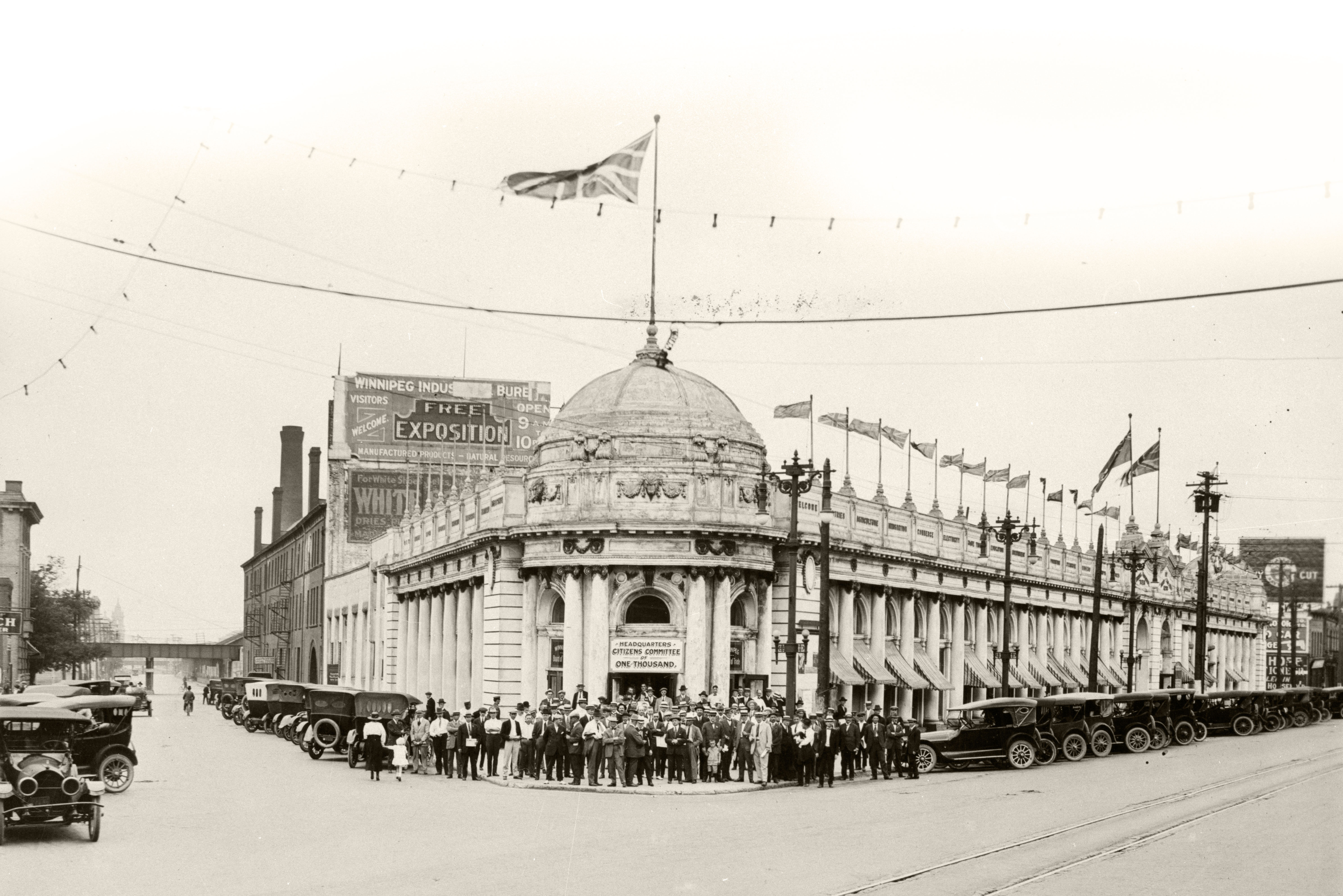 Prominent Winnipeggers formed the Citizens’ Committee of One Thousand to oppose the strike and maintain essential services.
Labour Canada/LAC/PA-202199

The huge size of the strike, its impact and the prevalence of strikes elsewhere in Canada (about 20 broke out in that year) reflected both dismay over the fallout from Canadian industrialization and the hopes and frustrations that had built up during the First World War.

A complicating factor was the influenza epidemic that swept the country in 1918-19, taking the lives of 1,000 in Winnipeg alone, many of them workers because poverty and poor living conditions made them more vulnerable.

Among the workers were undoubtedly miners’ families who had long waged an often-futile battle to improve conditions in the mines and at home. Conditions in the mines were so bad that Canada’s Department of Labour acknowledged that this country had the highest mining fatality rates in the British Empire.

Comparable conditions also prevailed in lumber camps and railway construction. Hours were long and overcrowded bunkhouses were infested with vermin. The owners of these camps treated them as their personal fiefdoms and crushed any attempts to form unions, sometimes with the aid of police forces and the military. Governments that supported the employers dragged their heels legislating factory and mining regulations, hours of work, minimum wages and working age.

With the war came inflation, restricted civil liberties and shortages. But at its conclusion, the war also brought the hope of social improvements and democratic reform. When these did not materialize, there was widespread disillusion, among both workers and veterans.

After the strike collapsed, the metal workers’ hours were reduced from 55 to 50 a week and the Manitoba government agreed to set up a royal commission to look into the strike’s origin and nature. To their dismay, the strikers received no other concessions, neither a pay raise nor collective-bargaining rights. Moreover, many of those workers in sympathy with the walkout had to reapply for their jobs, sometimes unsuccessfully.

Given the nature and size of the strike, it is not surprising that it created a deep division between Winnipeg’s affluent south end and the sprawling working-class north end. For decades, it would elect socialist and communist candidates to city council and provincial and federal governments. The strike would also deal a devastating blow to the western labour movement. In the strike’s aftermath came moderate labour leaders who favoured political action, not dramatic confrontations. The general strike would become a tool of the past.