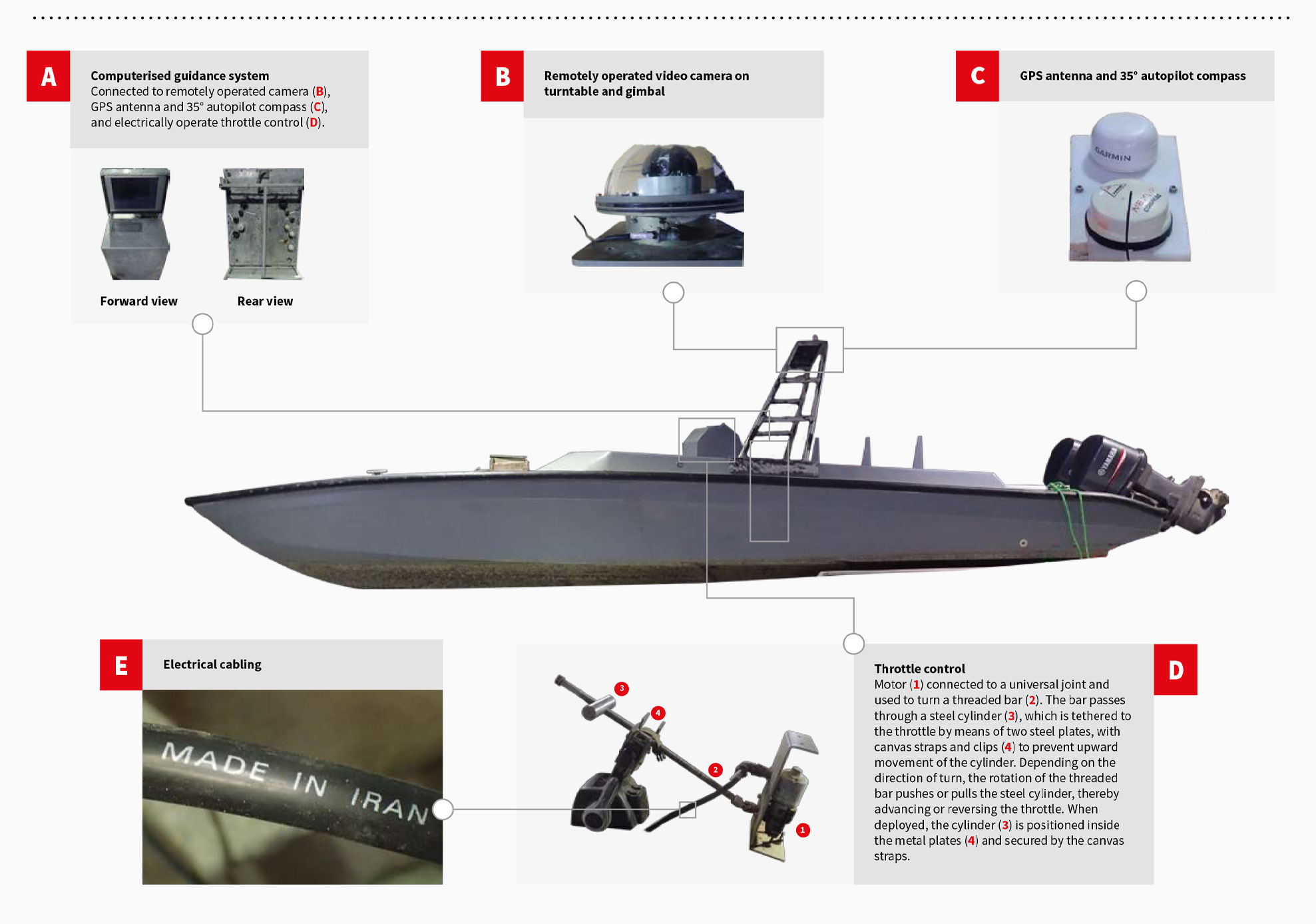 Schematic showing a waterborne improvised explosive device like the one used against a Saudi destroyer off Yemen last year. The remote-controlled boats, laden with explosives, contain parts made in Iran, though investigators say that doesn’t prove Iranian involvement. (Click-To-Enlarge)
Conflict Armament Research
Rebels in Yemen are wielding a new naval weapon on the Red Sea, but it took some time after it was first used for authorities to realize what they were dealing with.

An explosives-laden boat belonging to Yemen’s Ansar Allah, or Houthi, forces collided with a Saudi frigate 50 kilometres off the Yemeni coast on Jan. 30, 2017, killing two sailors and wounding three others. The ship’s onboard helicopter was destroyed and the ship’s stern section damaged, but it managed to limp back to port.

The incident, coming as Saudi-led forces moved to suppress Houthi rebels fighting Yemen’s Saudi-backed government, was first identified as a suicide attack, then claimed to be a missile attack.

It was weeks later that the U.S. Navy confirmed the weapon was, in fact, a crewless drone. But they provided scant detail. Blurry videos of the attack recorded by an onboard security camera and seaborne rebels subsequently appeared on YouTube.

– Video of the January 2017 attack on a Saudi frigate 50 kilometres off the Yemeni coast. Two sailors were killed and three others wounded, while the ship’s onboard helicopter was destroyed and her stern section damaged. –

Now the weapons investigation organization Conflict Armament Research (CAR) has published the first detailed images and descriptions of what it is calling a water-borne improvised explosive device, or WBIED.

In a 12-page report entitled Anatomy of a Drone Boat and published in December, CAR says the incident has drawn attention to the threat posed to international shipping by these new weapons operating out of Yemen’s coastal waters.

The images and information came from a briefing by United Arab Emirates forces in which a CAR field investigation team was shown a WBIED ostensibly captured from Houthi fighters. Its origins were independently confirmed by Western diplomats, although the circumstances of its seizure remain unclear.

Investigators found a Farsi-script keyboard on the vessel and confirmed some other parts were manufactured in Iran, but they said that does not necessarily mean Iranians built the drone.

It was adapted from a 10-metre patrol boat manufactured by Al Fattan Ship Industry of United Arab Emirates and provided to the UAE Coast Guard. UAE donated more than 60 of the patrol vessels to Yemen’s navy prior to the outbreak of hostilities.

The craft was outfitted with a pair of 200-horsepower Yamaha outboard motors, which the Yamaha Motor Co. Ltd. confirmed had been supplied to Al Fattan in the fall of 2013.

“Yamaha also informed CAR that, in response to its strict end-user controls, the UAE had notified the company that the engines would be fitted to an Al Fattan patrol boat and supplied to the Yemeni Navy for ‘coast guard patrolling,’” noted the report. 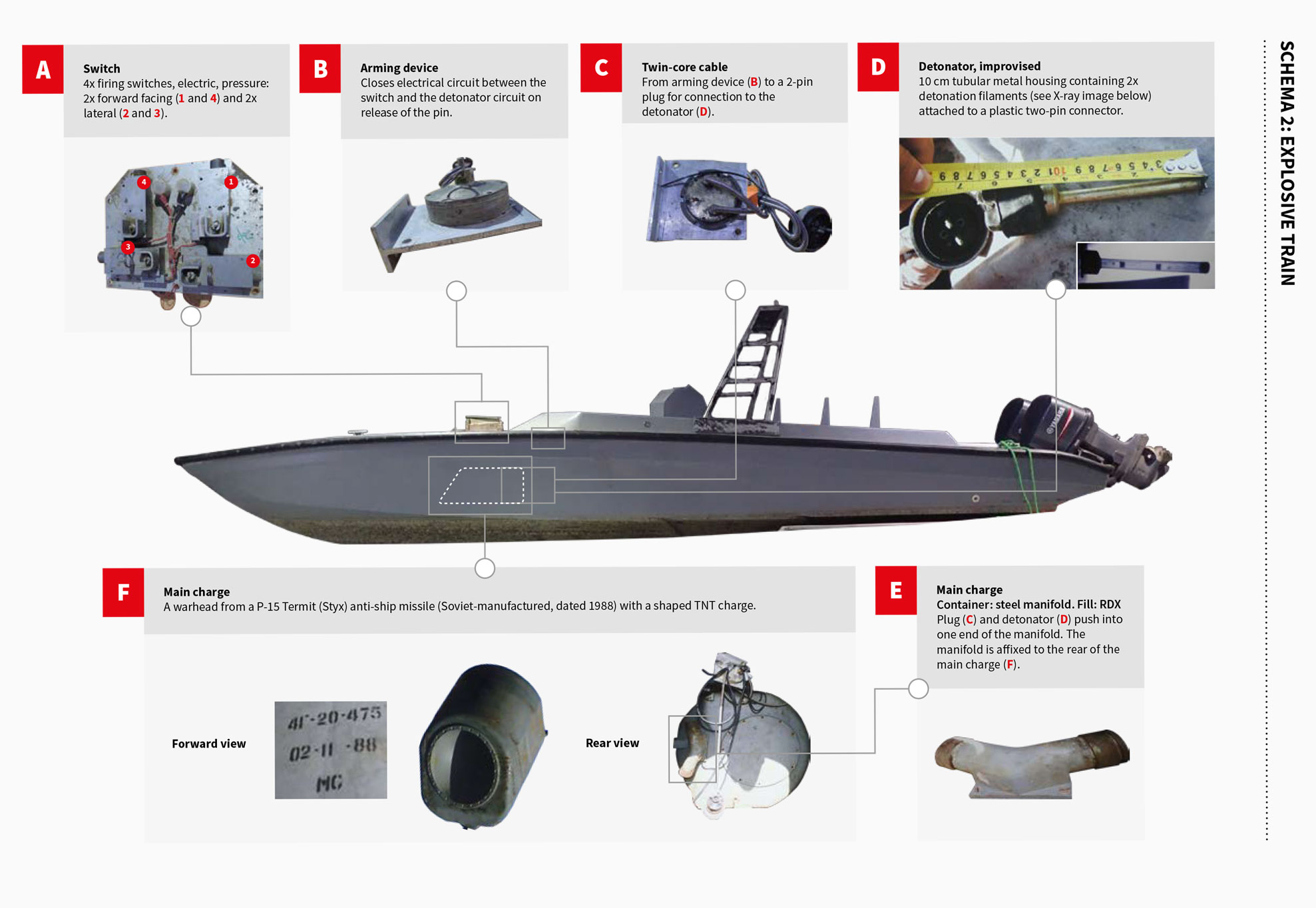 The vessels appear to be adapted from 10-metre patrol boats the UAE donated to Yemen’s navy prior to the outbreak of hostilities with Houthi rebels. The IED was comprised of a steel manifold filled with RDX explosive, bolted to the rear of the warhead of a Soviet-made P-15 Termit (Styx) anti-ship missile. (Click-To-Enlarge)
Conflict Armament Research
The vessel’s basic structure was unmodified, it said, and the steering system and the throttle control were factory-fitted along with a tubular steel tower.

Its conversion to a WBIED involved modifications to enable remote command and guidance and to store an improvised explosive device (IED).

It was radio-controlled by a custom-built computerized guidance system housed in an improvised control unit made of riveted sheet aluminum with a hinged lid and six electrical sockets of varying sizes and pin configurations. The investigators matched most of the sockets to sensors, antennae and servomotors on the vessel.

“Most of the cables used to connect the command and guidance elements bear the name of an Iranian manufacturer, the Simia Cable Co., and the Iranian certification body, the Institute of Standards and Industrial Research (ISIRI), together with the words ‘Made in Iran,’” CAR reported.

“While Simia produces a range of commercial products, and probably exports, the Iranian defence industry also employs Simia cables of the same types fitted to the WBIED.”

The control unit was connected by cable to a remotely operated video camera on a turntable and gimbal. It was mounted on the vessel’s tubular steel tower along with a Garmin GPS antenna and Nexus autopilot compass. This enabled the remote operator to stream live video of the boat’s movements and track its exact position.

The vessel must have been guided by a hydraulic power-assist autopilot, said the report.

“This device would have been fitted to the hydraulic hoses between the helm and the steering cylinder—below the rear deck and relatively inaccessible to inspection—and connected by cable to an autopilot controller,” it said.

“If this is correct, an autopilot controller would have been modified and connected to the improvised control unit. The 35° autopilot compass on the vessel’s tower suggests such a controller was fitted.”

The equipment would enable a remote operator to steer the vessel and increase or decrease speed, while monitoring its movements via video camera and GPS tracking.

The business end of the WBIED was comprised of a steel manifold filled with RDX explosive. The manifold was bolted to the rear of the warhead of a Soviet-made P-15 Termit (Styx) anti-ship missile, which was lot-marked and included a production date code for 1988. The Soviet Union sold 20 such missiles to Yemen in 1989.

“The P-15 is the second main charge in the IED and features a shaped TNT charge, which is designed to focus explosive energy and penetrate the hull of a naval vessel,” said the report.

The positioning of the P-15 charge and the arrangement of associated switches indicated that the drone was designed to hit the side of a larger vessel head-on. Additional switches were positioned to trigger a blast on a glancing impact, as well. 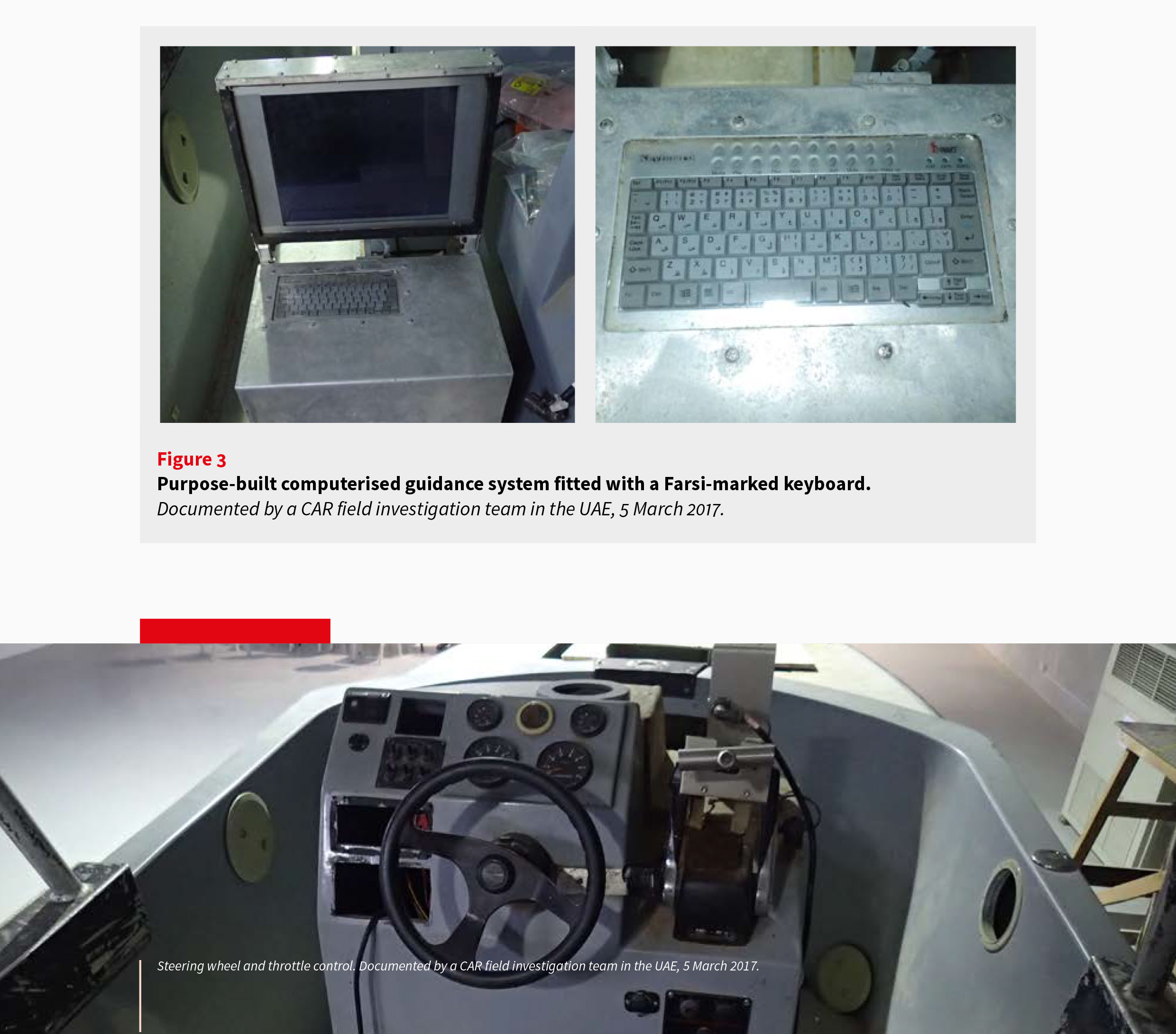 Details of the Houthi WBIED shown to Conflict Armament Research by United Arab Emirates forces, including its Farsi-script keyboard. The vessel’s origins were independently confirmed by Western diplomats. (Click-To-Enlarge)
Conflict Armament Research
“Multiple strands of evidence presented in this report suggest that the WBIED originated in Yemen, was modified with external components and expertise, and deployed by Houthi forces,” the report concludes.

The Britain-based non-governmental organization is now trying to trace a range of uniquely identifiable components used in the weapon’s guidance system and explosive train.

Founded by Hussein Badreddin al-Houthi in the 1990s, the Houthi movement is fighting economic underdevelopment and political marginalization in Yemen. It is also seeking greater autonomy for Houthi-majority regions of the country and calling for a more democratic, non-sectarian republic.