Should family members of deceased veterans be allowed to wear the military medals of their deceased relative?

Wright is retired from the federal government where he worked as an archivist and historian with Library and Archives Canada, and the RCMP. He has also authored books on Canada’s wartime service. Boileau, a retired army colonel, has authored several books and numerous newspaper and magazine articles on Canadian military history. He is also a frequent radio and TV commentator on military issues. 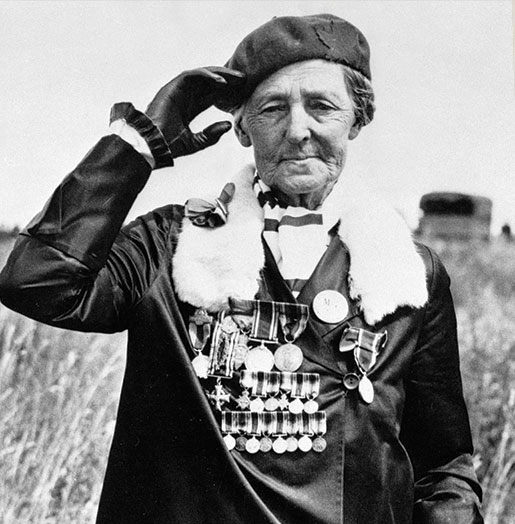 During a pilgrimage to Vimy in 1936, Charlotte Wood wears the medals of her sons who served.
PHOTO: LIBRARY AND ARCHIVES CANADA—PA148875

Service medals as well as honours and awards are sometimes worn by family members on Remembrance Day to respect and commemorate recipients of the medal and their contributions to military service. Yet, Canadian law and custom are unequivocal—military medals are to be worn only by those who were awarded them.

By all means, let’s remember what the medal represents, but let’s be wary of a practice that could very quickly lead to misuse and misrepresentation.

Medals are not costume jewellery. They connect recipients to a time in their lives when serving our nation took precedence over all else. From the militiamen in the War of 1812 to the young men and women who served in Afghanistan, it was a personal decision to defend our country, our values, our way of life. Permitting family to wear these medals diminishes the award itself. After all, what right do we have to appropriate the experience, sacrifice and valour of the original recipient and for what purpose? Would any protocol to allow the wearing of medals on the right breast as opposed to on the left breast be obvious to all observers? That would open the door to confusion and be a serious disservice to all veterans and disrespectful of those who first earned the medals.

If the existing law were amended, what would the protocol be and how would it be enforced? What if wearing medals was abused and they were worn on days other than Remembrance Day? Would that lead to other demands, would family members want to wear other honours and awards, such as the Order of Canada? The true value and meaning of the medal would be trivialized.

Does wearing the medal of a serviceman or servicewoman who may have served in the Second World War truly evoke the memory of that veteran two or even three generations removed? Should a 14-year-old wear great-grandfather’s Distinguished Flying Cross? Medals should be cherished and treasured by families because they are a tangible link to the recipient and may be the only reminder one has of a loved one. Why risk loss, damage or theft by wearing them in public?

There are other ways to cherish the memory of veterans. With the centenary of the First World War and the 75th anniversary of the beginning of the Second World War upon us, we can commemorate our veteran ancestors by studying what they did. For the First World War, entire service files will be online and accessible to all at Library and Archives Canada in early 2015. The service records of those who died in the Second World War are available now without restriction.

There are other practical alternatives to wearing an ancestor’s medals. We already remember fallen heroes in various ways, the most popular being the memorial ribbon currently used by the Canadian Armed Forces, police services and so on. In place of wearing original and often valuable, irreplaceable medals, why not design a distinctive memorial ribbon family members and even friends can wear on Remembrance Day to remember veterans, even long-ago ancestors, who served our country? This would be simple and practical.

Finally, for those of us who have a family or ancestral connection to wartime or peacetime service, our very presence at Nov. 11 ceremonies is recognition of our own emotional attachment not only to a relative or relatives who served, but to all veterans who fought and died for our country. Perhaps at some future Remembrance Day, when many of us may have a memorial ribbon to wear, we can honour the fallen without appropriating what they so bravely earned.

Charlotte Wood of Winnipeg, Canada’s first Silver Cross Mother, attended the unveiling of the Canadian National Vimy Memorial in 1936. She had 12 sons, several of whom served in the Canadian or British forces. Not all of them survived the war.

At ceremonies, Charlotte Wood wore the medals of all her sons that served.

If she had worn their medals in Canada, she would have broken the law.

Since 1920, Article 419 of the Criminal Code of Canada has stated in part: “Everyone who without lawful authority…wears a…military medal…or any decoration or order that is awarded for war services…is guilty of an offence punishable on summary conviction.”

Perhaps because the incident occurred outside Canada, no one charged Charlotte Wood.

In fact, very few people who wear the medals of others ever are. It is normally up to police to investigate and lay charges, Crown prosecutors to approve sending those charges to court and judges to hear and rule on them. But apparently it is generally deemed not in the public interest to proceed with such charges, perhaps being considered an inappropriate use of an already overworked judicial system.

This law was ostensibly introduced to deter others from impersonating veterans returning from the First World War who were entitled to certain benefits. If it ever was a compelling reason then (how about simply showing a discharge certificate?), it is certainly groundless in this day of digitized records.

The wearing of deceased veterans’ medals by relatives has become a hot-button topic lately. Both sides of the argument have weighed in with their opinions. Most who object believe relatives have not earned the right to wear medals or see it as an attempt by the wearers to boost their egos, which could cheapen the medals. But veterans’ relatives do not claim to have been awarded these medals. They want to wear them for other reasons.

As the Criminal Code only prohibits the wearing of military medals, decorations or orders awarded for war service, it would appear that there are several medals that can be worn legally by others, such as various commemorative medals. It would also seem that military medals not awarded for war service can also be legally worn by others, including the Special Service Medal and Canadian Forces Decoration.

The federal order-in-council, Canadian Orders, Decorations and Medals Directive, 1998, states that “the insignia of orders, decorations and medals shall not be worn by anyone other than the recipient…” It is doubtful however, if charges would ever be laid under this order.

In fact, it would be hard to imagine Canadians tolerating the prosecution of anyone for wearing the medals of loved ones on special occasions, for example a mother whose son was killed in Afghanistan or the widow of a Second World War veteran.

Although it is illegal to wear veterans’ medals in Britain and some other Commonwealth countries, these same countries do not have a problem if the veteran is deceased. As the Royal British Legion website notes, “The medals awarded to a deceased service/ex-service person may be worn on the right breast by a near relative”—parent, spouse, sibling or child—as opposed to on the left side of the chest, where most medals recognized in the Canadian Honours System are traditionally worn.

What a sensible solution—one that Canada should adopt.

With a few simple guidelines, this could become a reality. For example, medals could only be worn on the right side (as Legion medals are now), the veteran would have to be deceased, only one set of medals could be worn at a time and only close relatives (parents, spouses, siblings and direct descendants in perpetuity) could wear them on limited appropriate occasions, such as Remembrance Day.

What better way to show gratitude for our departed veterans’ service, honour their memory, reflect pride in their achievements and maintain their legacy?