Cambrai And The Great Retreat: Part 10 of 18 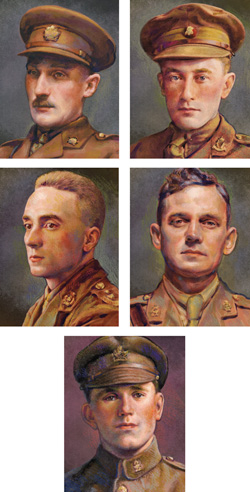 November 1917 saw the beginning of the turning point in the fortunes of World War I. The Russian Revolution earned Germany peace with the Bolsheviks, which freed up enough troops from the east to bolster their Western Front strength to 177 divisions. This seriously upset the balance between the German and Allied forces, who had been forced to divert 11 divisions to the Italian Front and were thinly spread with few reserves. The Germans now had sufficient strength to plan an assault to deliver a knockout blow by striking at the Allies’ weakest point, aimed at splitting the French and British armies and forcing an armistice before the American presence could be felt.

In that same month, on a much more limited scale, an event took place that determined the future strategy of ground warfare up to the present day. Significantly, somewhat ironically, it featured a Canadian cavalry officer.

In the aftermath of the capture of Passchendaele the Canadian Corps returned to the Lens front and trench warfare stalemate with one notable exception—a tank assault on the textile town of Cambrai. As an assault weapon, the tank had been vastly improved since its first appearance at the Somme in 1916 when the vehicles broke down due to mechanical failures or getting stuck in the mud.

On the morning of the attack the tanks rolled across no man’s land, followed by the infantry and the cavalry. The absence of the customary artillery barrage caught the Germans completely by surprise and the tanks and infantry advanced an unprecedented four miles to the enemy trenches between Gonnelieu and Hermies. The Fort Garry Horse in the vanguard of the cavalry brigade began riding into Masnieres and across the Sensee River bridge on the main street. The canal bridge beyond it collapsed under the weight of a tank which tumbled into the water. However, another bridge to the southwest had been repaired, allowing the Fort Garrys to ride across it that afternoon and push ahead to a German stronghold on a ridge beyond it.

Meanwhile, the regimental commander had been ordered to remain west of the canal because the infantry had been brought to a halt. But the message was never received by B Company which was embroiled in a pitched battle in which the company commander was killed.

Lieutenant Harcus Strachan immediately took over and led his troops through a gap in the barbed wire and charged towards Rumilly. Riding at full gallop, the troops assaulted a field gun battery. Strachan killed seven of the gunners with his sword. The company now halted to await news or sight of their regiment. But by nightfall it was obvious no support would be forthcoming, and by this time the Germans had the dismounted cavalrymen surrounded. The enemy made frequent attacks but were beaten back. By morning, with only five horses still unwounded, the company reduced to 50 men and their ammunition dwindling, they knew they could not hold out much longer. Strachan decided they should make a break for it and fight their way out.

They cut three German telephone cable lines, then taking a compass bearing from Rumilly tower in the distance, Strachan collected the horses and stampeded them eastwards. Believing they were under a renewed cavalry attack, the Germans machine-gunned the unfortunate animals. But the diversion allowed Strachan to lead his men to the British lines. Although the company was attacked four times, the men not only fought off the Germans but took several prisoners.

Under Strachan’s leadership, for which he was awarded the VC, B Company destroyed a gun battery, killed 100 Germans and captured another 15. Though the tanks had proved their worth as an offensive weapon, as a breakthrough the attack on Cambrai failed for lack of tank reserves and the infantry wallowing in the Flanders muck. The real stars of the show were the cavalry.

Born in Barrowtouness, Scotland, in 1889, Strachan received his VC from King George V on Jan. 6, 1918, by which time he had been promoted to captain. Later in the year, he was promoted to major. After the war, he retired to Edmonton to farm, then went into the banking business. When WW II started, he re-enlisted in the 15th Alberta Horse and in 1940 was appointed a major of the South Alberta Regiment, then in July of the same year was made commanding officer of the Edmonton Fusiliers. After the war, he retired to Vancouver where he died in 1982.

At 5 a.m. on March 21, 1918, through a blanket of white fog, 64 German divisions attacked the Allied line on a 54-mile front between St-Quentin and Arras. The immediate objectives were the key railhead centres of Amiens on the Somme River and Hazebrouck. By noon they had broken through the British 5th Army into open country. At nightfall next day they were on the Somme. Before the advance was stopped, the Germans had come within 10 miles of Amiens and reached the Marne River, 40 miles from Paris, recovering 240 square miles of lost territory.

During the 12 weeks the advance lasted, four Canadian VCs were earned, all but one posthumously. Ironically, the sole surviving recipient was killed in a freak accident eight years later.

On the first day of the retreat, Lieutenant Edmund De Wind of the 17th Royal Irish Battalion almost single-handedly held down a machine-gun post at the Race Course Redoubt near Grougie for seven hours, despite being twice wounded. He twice went over the top in the face of fierce machine-gun and rifle fire to assault and subdue a German trench by killing its occupants. In spite of fearful casualties to his battalion he held his post until reinforcements arrived. But by then he had died of his wounds.

Born in Comber, Ireland, in 1883, De Wind emigrated to Canada in 1911 and worked for the Canadian Bank of Commerce in Edmonton before enlisting in the 21st Canadian Bn. in 1914 and served in the battles of St-Éloi, Ypres and the Somme before transferring to the Royal Irish. His name and picture appear in the Canadian Imperial Bank of Commerce memorial book, and his name is on the memorial of the bank’s main Edmonton branch as well as the city’s All Saints Cathedral. A mountain in Jasper National Park is named after him. His name is also entered in the Pozières Memorial in France.

His VC was presented to his mother by King George V.

The Canadian Cavalry Brigade, fighting a series of rearguard actions, was ordered to seize the Bois de Moreuil where the Germans had a commanding view of Amiens 12 miles away. C Squadron of the Lord Strathcona’s Horse, under Lieutenant Gordon Flowerdew, had to ride around the northern corner of the wood and seal off the enemy.

When Flowerdew and his men came up out of a draw and onto higher ground they saw, right in front of them, two lines of German soldiers about 60 strong and 200 yards apart with machine-guns on either flank and one in the centre. Flowerdew ordered a frontal attack.

When the Germans saw the Canadian cavalrymen they let fly with everything they had. In one of the last cavalry assaults in history, reminiscent of the Charge of the Light Brigade, the Strathconas attacked at full gallop. The Germans threw hand grenades at their assailants and attacked with bayonets. The cavalry responded with their swords, hacking, slicing, piercing, stabbing as they charged through German lines. By this time, Flowerdew had lost 70 per cent of his men and was himself severely wounded in both thighs. But the Germans had taken a beating too and were forced to regroup. The Germans’ advance had been stopped and Amiens saved. Flowerdew was awarded the VC for leadership in capturing the position, but he died from his wounds in hospital the next day and was buried in Namps-au-Val British Cemetery near the Picardy capital.

He was born in Billingford, Norfolk, England, in 1885, and came to Canada in 1903. He was living in Wallachin, B.C., when he enlisted in the 31st British Columbia Horse Regt., later transferring to the Strathconas. His VC was presented to his mother.

While leading a raiding party April 27-28 on the Gravelle sector of the Hussar trench along the Lys River near Vimy Ridge by E Group of the Royal Montreal Regt. of the Canadian 14th Bn., Capt. George McKean’s progress was bogged down by the stubborn resistance of a German garrison sheltered in a trench block from which the enemy bombarded McKean’s party with grenades and rifle fire. Three times the Montrealers ran out of “pineapples” or Mills bombs and three times McKean sent back for more grenades. But they still failed to dislodge the defenders.

Knowing the success of the battalion’s operation depended on wiping out the resistance, McKean ordered his men to stand aside. Although the block was well protected, McKean leaped over it headfirst and crashed into a German rifleman. Then when another enemy soldier rushed at him with a bayonet, McKean shot him dead, then killed the man he’d landed on.

Simultaneously, his men swarmed over the barricade, overcame it, then charged a second block along the trench. A fierce fight developed that lasted only a few minutes before the Germans fled into a dugout. However, McKean and his men finished them off with well-directed “pineapples” and took occupancy of the trench.

George Burden McKean, who was born in County Durham, England, in 1888, emigrated to Canada in 1902, where he settled in Edmonton and attended the University of Alberta. When war broke out he joined the 51st Bn., then transferred to the 14th. He received his VC and Military Medal, which he earned earlier, from King George V on July 17, 1918, and that September earned the Military Cross. After the war, he moved to Brighton, England, where he operated a sawmill. He was accidentally killed Nov. 28, 1926, when a circular saw broke and pieces struck him in the head. He was buried in Brighton Extra-Mural Cemetery.

In preparation for a night attack on the 22nd Canadian Infantry Bn. the Germans launched a heavy barrage. Quebecker Corporal Joseph Kaeble in charge of a machine-gun post lost all his men either killed or wounded except one. When the bombardment lifted and 50 enemy infantry charged his position, Kaeble leaped over the trench parapet and faced them head-on, firing his Lewis gun from the hip, emptying drum after drum. Finally, fatally wounded, he fell back into the trench firing off a few last rounds over the parapet. Before passing out he exhorted those around him: “Keep it up boys, don’t let them through! We must stop them!” Kaeble died never knowing that his single-handed action that earned him the VC forced the Germans to retreat.

Kaeble was born at St-Moïse in Matane County, Que., in 1893, and was educated in Sayabec. At age 17 he took a job as a driver-mechanic with a lumber firm in Princeton. In 1916, he joined the 189th Bn. From the lower St. Lawrence and was later transferred to the 22nd.

Kaeble’s mother received his VC from the governor general, the Duke of Devonshire. His name appears in the memorial in Sayabec parish church in the town where he went to school.