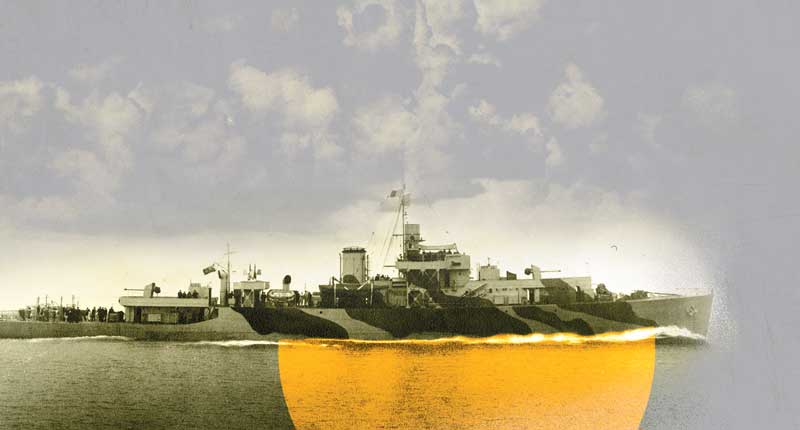 HMCS Dunver appears in a publicity shot on its commissioning during the Second World War
Clifford J. Quince

How Verdun, Que., formed a special bond with its own warship

Local interest in the activities and welfare of a place’s namesake warship is strongly reminiscent of practices in Canada during the Second World War. The majority of the country’s Second World War warships carried the names of Canadian municipalities and most of the locales took an active interest in the vessel bearing their name. The link encouraged towns to organize fundraising activities to pay for various crew comforts, while also following the war vicariously through the ship’s engagements. 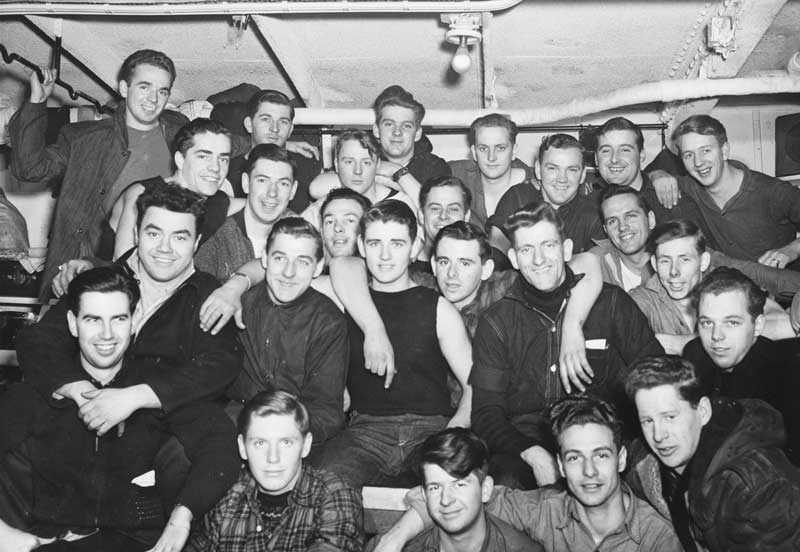 One particularly noteworthy example of the relationship was between the city of Verdun, Que., and its unusually named namesake warship, HMCS Dunver.

Nestled along the St. Lawrence River and bounding Montreal to the southwest, Verdun was a working-class municipality about nine square kilometres in size. In 1941, it boasted a population of more than 67,000, about 58 per cent of whom were English speaking. A minority of that group were also British-born immigrants, including the mayor, Edward Wilson. Almost all other Verdunites were of French origin. About 7,000 citizens of Verdun saw active service during the war, including more than 1,000 in the navy, a very high proportion of sailors from any city.

The naming of a ship in honour of Verdun generated excitement and pride in the community. It was all part of a bigger plan. In 1940, Royal Navy Commander Eric S. Brand suggested to Naval Service Headquarters (NSHQ) in Ottawa that, despite an apparent willingness on the part of the RCN to name its newly built anti-submarine corvettes after flowers as was the practice in the Royal Navy, it might be best to name new Canadian warships for towns and cities. Such naming protocol offered the opportunity to link Canadians directly to the naval war. A carefully managed ship-naming policy was born.

NSHQ ranked Canadian cities and towns with populations higher than 2,800 to create a list of potential names, although a provision was made to include smaller communities, too, if they demonstrated particular enthusiasm for the war effort. Sending a town’s name into action could serve as a prize for the patriotic. 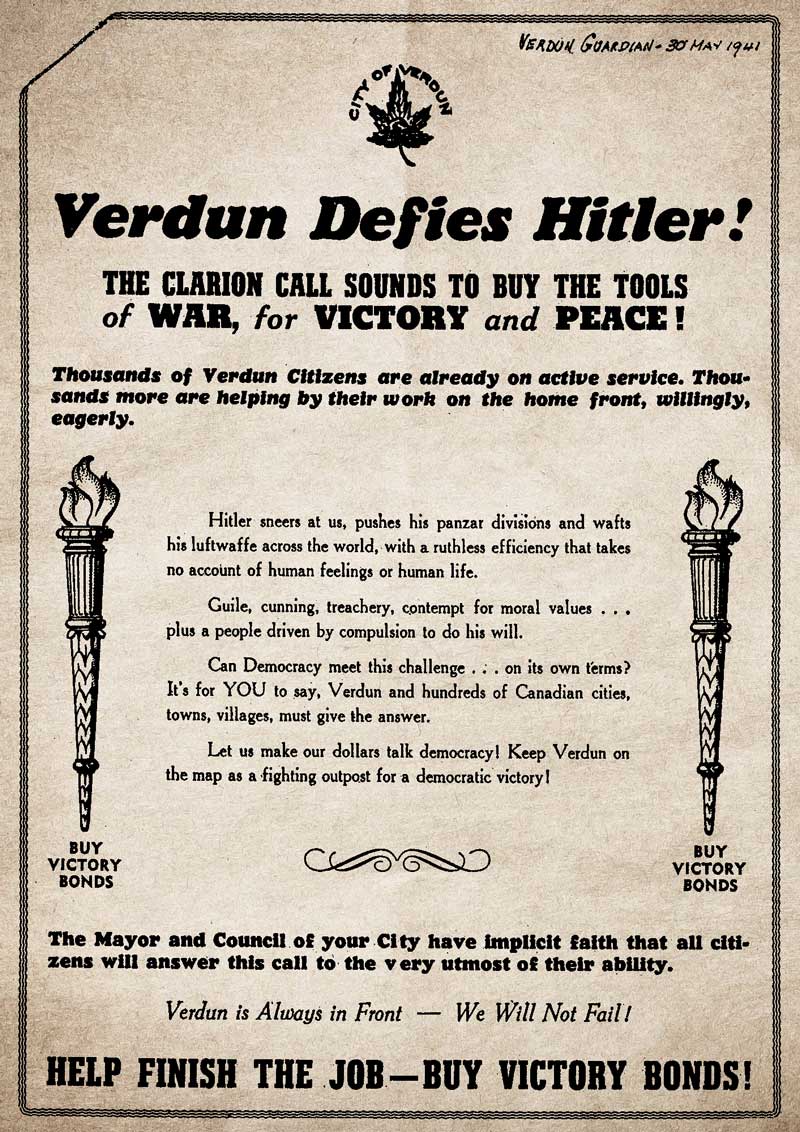 Some complications occasionally arose, however. Several larger Canadian communities, such as London, Ont., shared names with places in Britain that the Royal Navy had already used. To avoid confusion, no repeat names could be accepted among Commonwealth naval forces.

More than 70 Canadian municipalities were obliged to select alternative names—a substitute associated with the place—with the understanding that the navy would exercise final approval. Naval historian David J. Freeman has noted that this alternative naming policy, which began in the spring of 1942, was “unique among the navies of the world.”

In September 1942, NSHQ informed Wilson that “in view of the importance of your City in the Dominion of Canada,” the navy had decided to name one of its new class of frigates, then under construction in Quebec City, after Verdun. But since the Royal Navy already had a ship named Verdun (honouring the First World War battle), naval authorities asked the mayor to send them three alternative names of “local significance.” 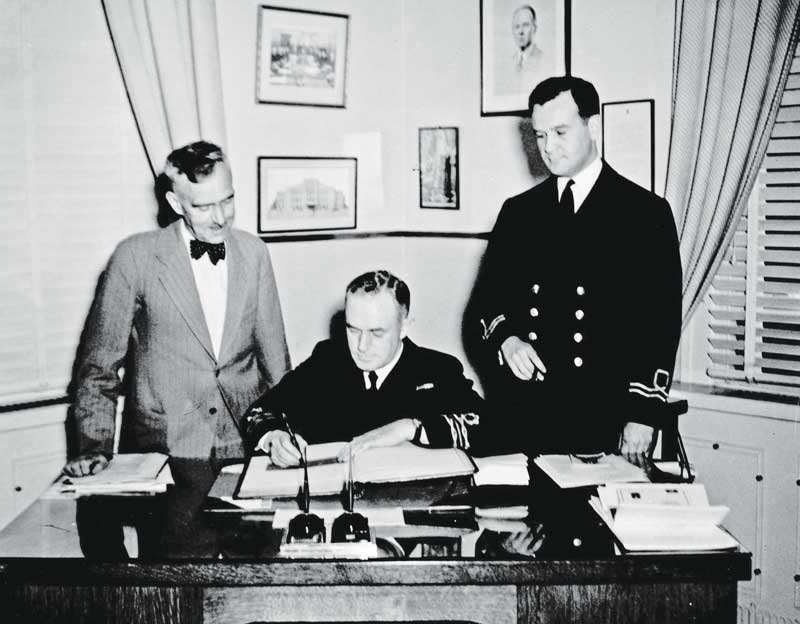 Lieutenant-Commander William Woods, the commanding officer of Dunver, signs the Golden Book of the City of Verdun in
the mayor’s office in June 1943.
Clifford J. Quince/CWM/20030177-021

The majority of the country’s Second World War warships carried the names of Canadian municipalities.

Wilson initiated a city-wide contest managed by the local Guardian newspaper to select the three options. The citizens picked as their first choice Beurling in honour of Pilot Officer George Beurling, the Verdun ace who had gained international fame that summer for his remarkable combat record over Malta. The second preference was Crawford the surname of one of Verdun’s founders. The third suggestion was Dunver, simply a flipping of the two syllables in Verdun.

Given the navy’s policy of not considering names of individuals, Dunver it was.

In April 1943, Minister of National Defence for Naval Services Angus Macdonald had invited the city of Verdun, or local volunteer groups on its behalf, to adopt Dunver by sending comforts to its crew. Macdonald noted that community engagement “has been found to be very advantageous in keeping up the morale of ships’ crews.” It also linked home front to battle front and heightened a sense of civic participation in the war.

In June, Verdun officials warmly received HMCS Dunver’s first commanding officer, Lieutenant-Commander William Woods, coincidentally a British-born Verdunite, and his executive officer, Lieutenant André Marcil. It was the start of a warm relationship between city and ship that would last throughout the war. By chance, there were usually five or six crewmen from Verdun serving aboard.

Dunver was officially commissioned in Quebec City on Sept. 11, 1943. At first, the anti-submarine frigate’s crew appeared to pay scant attention to the ship’s unusual name, the only one in the fleet mixing syllables this way. One Dunver rating, Robert Bruce, remembered that while “most of the crew were aware of the origin of the name…at that time everyone was more interested in the ship itself and the job to be done.” On the other hand, A. Keith Givens recalled that “officers and senior ratings made everyone aware of how [the] name came about [as a] morale booster” and the crew seemed “very proud” to represent Verdun.

Less than two weeks later, Woods and Marcil were again guests in Verdun at a large public dance and reception. Local politicians from all levels, prominent citizens and the general public all paid 50 cents each to attend, with the proceeds used to purchase items for “Verdun’s own frigate.”

Wilson presented Woods with a framed portrait of King George VI for the officers’ wardroom and, more practically, the promise of immediate delivery of 40,000 cigarettes for distribution to the nearly 150 crew members. The city also contributed $100 for the purchase of other amenities, to be selected at the discretion of the ship’s officers. Woods told the gathering: “I feel proud to live in…such a truly loyal and patriotic community. Verdun will always have reason to be proud of her own warcraft and of the gallant crew aboard the ship.”

Verdunites, too, sent many of these items, all paid for by local collections and donations. The city mailed a second shipment of 40,000 cigarettes just before Christmas in 1943 and, as a reminder of its sponsorship, presented Dunver with an official crest of the city for mounting aboard. It was duly displayed.

The people of Verdun provided some big-ticket items as well. In late 1943 and early 1944, the city was able to procure two scarce washing machines and send them to Dunver, the $300 cost raised locally by the Verdun Women’s Volunteer Reserve Corps (WVRC), a high-profile patriotic group. In April 1944, Verdun’s city clerk, British-born Arthur Burgess, wrote Woods that “nothing would be too much trouble for us.” In September 1944, the WVRC and the Verdun Salvage Committee bought a piano and sent it to Dunver. In early 1945, the WVRC, local businesses, the Lion’s Club and The Royal Canadian Legion’s Verdun Branch combined their efforts to purchase (at the whopping cost of $600) a much-coveted film projector.

The sailors appreciated the gifts, and crewman Walter Finlay remembered that “we knew the citizens were thinking of ‘their ship’ and trying to make the crew happy. [The] washing machine was a big thing. Smokes, woollen goods and candy bars were always nice to receive.”

In July 1944, a Verdunite stationed in Halifax visited Dunver and experienced first-hand the crew’s gratitude for the city’s thoughtfulness. Wren Jean Nugent, of the Women’s Royal Canadian Naval Service, wrote her mother that, “I was on the ‘hometown ship’ [and]…treated like a queen.” At her request, Nugent’s letter was published in the Guardian, “so that citizens will know that the officers and ratings of their namesake ship really appreciate what is being done for them.”

On Jan. 23, 1946, Dunver was decommissioned and sold for scrap. In 1948, the vessel was sunk as a breakwater in Royston, B.C., and its bones can still be seen today. A street name in Verdun commemorates the ship. 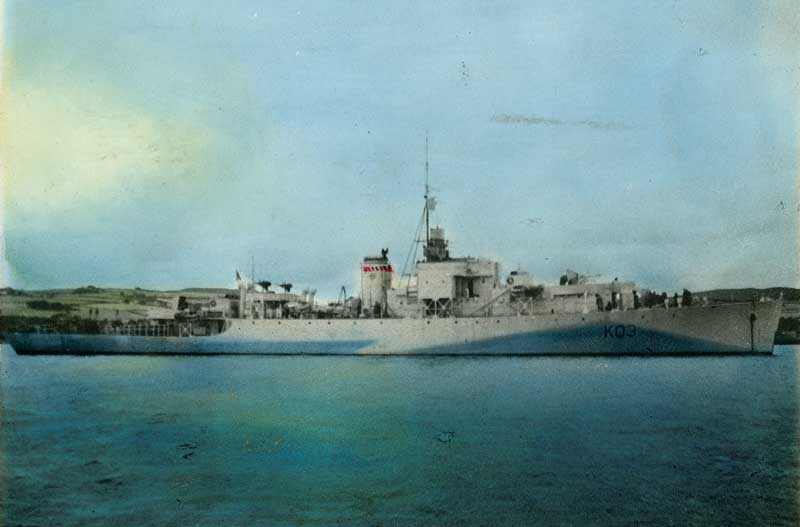 HMCS Dunver appears in a publicity shot on its commissioning during the Second World War.
Clifford J. Quince

HMCS Dunver was the first River-class frigate launched for the Royal Canadian Navy. It displaced 1,445 tons and was armed with two 4-inch guns, one 12-pounder, and eight 20mm Oerlikon anti-aircraft guns. It also caried the Hedgehog anti-sub mortar and about 150 depth charges.

Following its commissioning on Sept. 11, 1943, it served as part of Escort Group C-5 and helped shepherd transatlantic convoys of vessels laden with precious war supplies for the Allied war effort. In July 1944, Dunver was the senior officer’s ship escorting HXS-300, the largest convoy of the war, numbering 167 merchant vessels. On Sept. 9, Dunver and HMCS Hespeler were credited with sinking U-484 south of Scotland’s Hebrides Islands.

Transferred to the West Coast at war’s end, the ship was decommissioned in 1946. 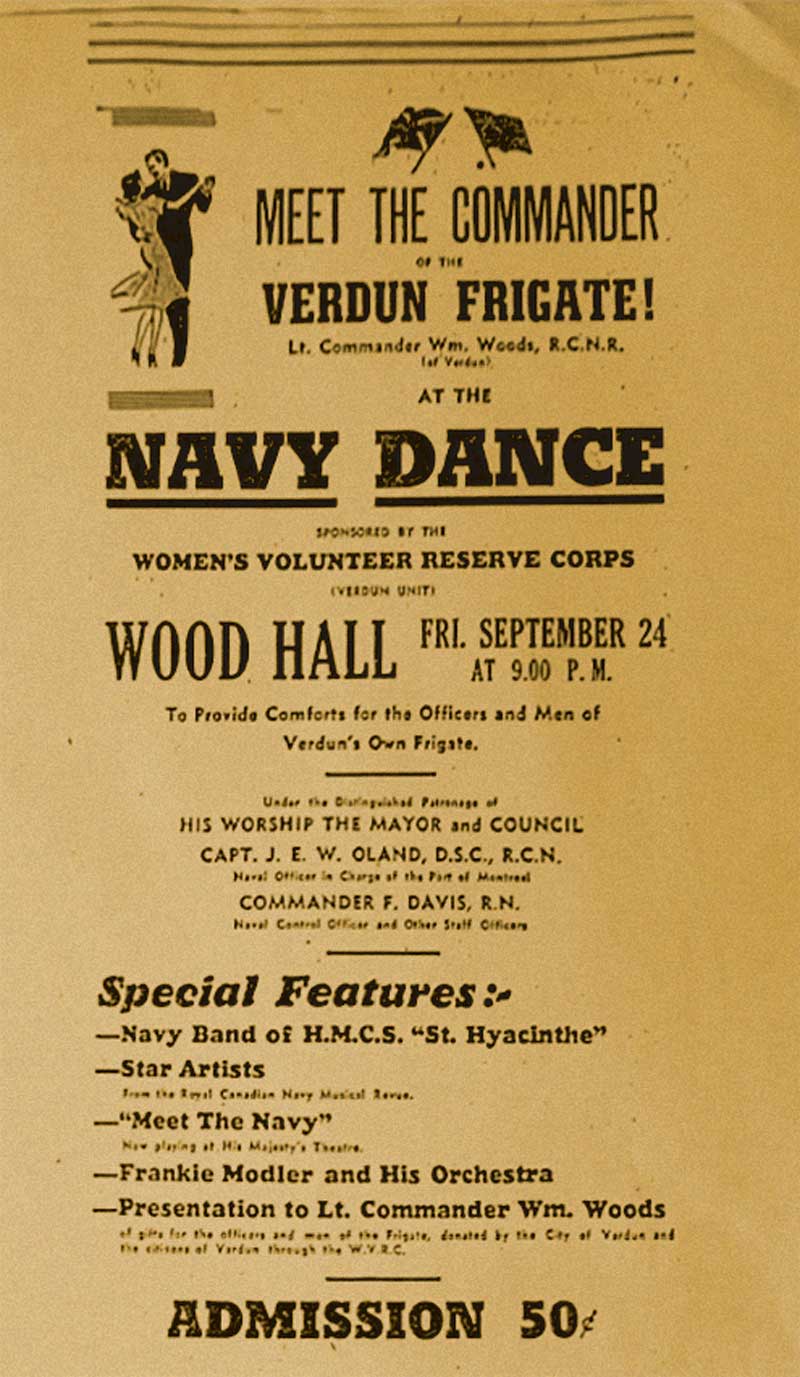 Dunver’s crew, such as a dance advertised in a local paper during the war.
Courtesy Serge Durflinge